President Joe Biden said Sunday he did not want to hold a joint press conference with Russian President Vladimir Putin next week because he wasn’t interested in getting into a ‘contest’ after he raises serious issues with his counterpart.

‘It’s about making myself very clear what the conditions are to get a better relationship with Russia. We are not looking for conflict. We are looking to resolve those actions which we think are inconsistent with international norms,’ he said.

He spoke after the White House announced Biden would address the media solo following the summit meeting in Geneva, in a move that could prevent a rerun of former President Donald Trump’s infamous summit with Putin in Helsinki.

‘I don’t want to get into being diverted by did they shake hands who talked the most and the rest,’ he told reporters, President Joe Biden said when asked why he doesn’t want a side-by-side press conference with Russia’s Vladimir Putin next week

The move also ensures Biden won’t create and stumbles in front of a top U.S. adversary. as he did Sunday when he inadvertently mixed up ‘covid’ with the global ‘COVAX’ vaccine project.

Biden chuckled when asked why he didn’t want to stand side-by-side with Putin to call out Russian behavior in front of a global audience. He also agreed with Putin saying U.S.-Russia relations were at a low point.

He spoke as he declared the U.S. and western nations to be in a ‘contest with autocrats’ for the support of people around the world.

He said a joint event with Putin could be a distraction from his substantive goals.

‘I don’t want to get into being diverted by did they shake hands who talked the most and the rest,’ he told reporters.

‘He can say what he thinks the meeting is about and I will say what I think the meeting was about. That’s how I’m going to handle it,’ Biden declared.

‘Russia has engaged in activities which we believe are contrary to international norms. But they have also bitten off some real problems they’re going to have problems chewing on,’ Biden said.

He also responded to the latest comments from Putin on Russian state television in response to U.S. concerns about ransomware hackers said to be based in Russia.

‘That’s potentially a good sign of progress,’ Biden said, adding he had been updated on the topic en route to have tea with The Queen and then head on to Brussels. 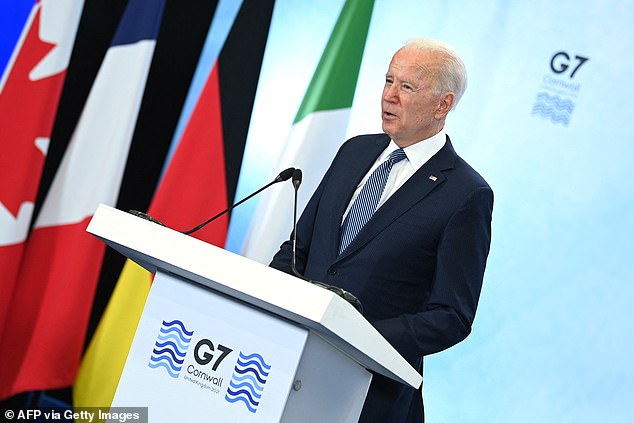 Said Putin: ‘If we agree to extradite criminals, then of course Russia will do that, we will do that, but only if the other side, in this case the United States, agrees to the same and will extradite the criminals in question to the Russian Federation,’ Putin is said, according to the Interfax news agency.

‘I’m committed to holding them accountable,’ Biden said, on the subject of such people being harbored in the U.S.

Biden said after he got elected he spoke to U.S. intelligence about whether Russia interfered in the election. ‘He was engaged in those activities. I did respond and made it clear that I’d respond again,’ in possible reference to U.S. sanctions. Biden has spoken to Putin by phone as president.

The U.S. doesn’t have a functioning extradition treaty with the U.S. – although there is an 1893 treaty that has not been abrogated.

The series of questions about Putin were an indication of how the upcoming storyline is eclipsing the pledges of goodwill and cooperation among the leading economic nations.

‘America is back at the table,’ Biden declared.

Leaders who met for their final day at the G7 in Cornwall issued a final communique where they called on China to respect ‘fundamental freedoms’ and called for a ‘science-based’ probe of the origins of the coronavirus.

The text of the communique included a detailed passage on China, after haggling between member nations over how far to push Beijing.

‘We will promote our values, including by calling on China to respect human rights and fundamental freedoms, especially in relation to Xinjiang and those rights, freedoms and high degree of autonomy for Hong Kong enshrined in the Sino-British Joint Declaration and the Basic Law,’ according to the communique.

The agreement also called for a ‘timely, transparent, expert-led, and science-based WHO-convened Phase 2 COVID-19 Origins study’ of the origins of the coronavirus in China, in reference to the World Health Organization. 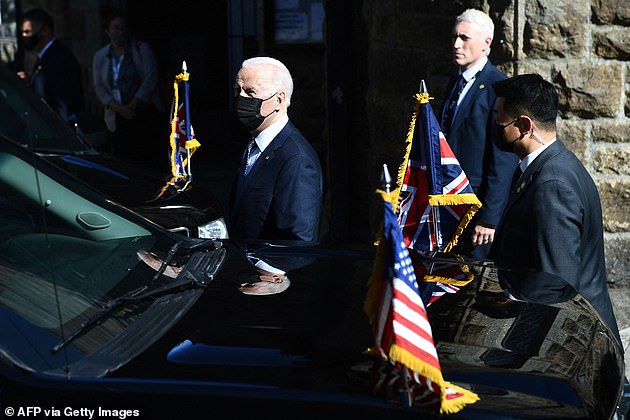 President Joe Biden and his team have been pushing for a strong statement on human rights in China at the G7 summit. It was not certain Sunday that a final communique would mention China by name, although a senior official said there was ‘unanimity in terms of a willingness to call out human rights abuses and violations of fundamental freedoms’

Said an administration official: ‘Three years ago, China wasn’t even mentioned in the G7 communique. This year there is a section on China that speaks to the importance of coordinating on and responding to China’s non-market economic practices and the need to speak out against human rights abuses, including in Xinjiang and Hong Kong.’

According to the document: ‘We remain seriously concerned about the situation in the East and South China Seas and strongly oppose any unilateral attempts to change the status quo and increase tensions.’

Another section deals with forced labor practices, as well as supply chain issues.

The language came after it was not yet clear on Saturday that it would mention China by name.

Leaders attending the summit have made contending with China’s economic ambitions and countering its human rights practices a prime focus, even as they seek to unify the richest democracies against climate change and stamping out the coronavirus.

But tactical splits within the coalition have caused aides to keep working on final text of the communique, with late doubts about how far it will go.

‘I would say there was unanimity in terms of a willingness to call out human rights abuses and violations of fundamental freedoms that invoke our shared values,’ said a senior administration official. 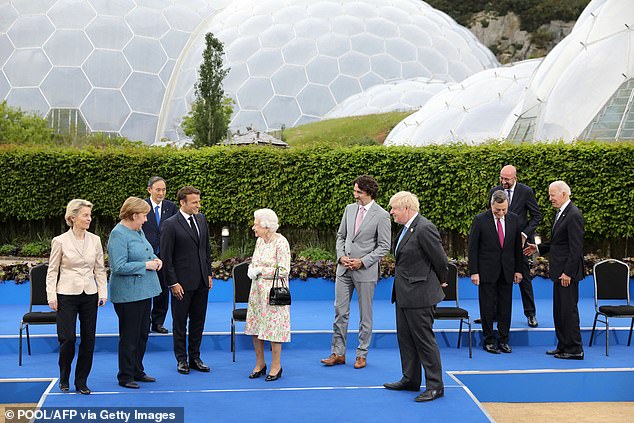 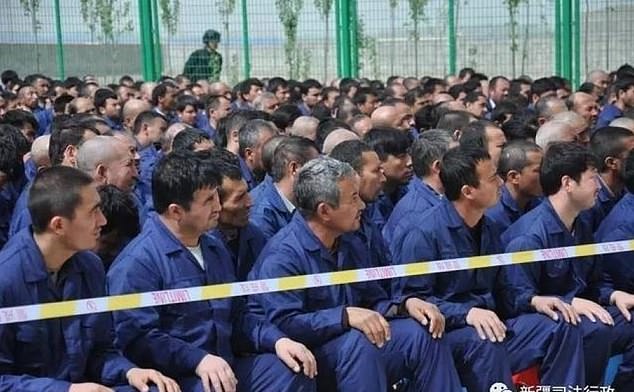 The document calls for China to respect human rights and mentions Xinjiang, where Uyghurs are being detained 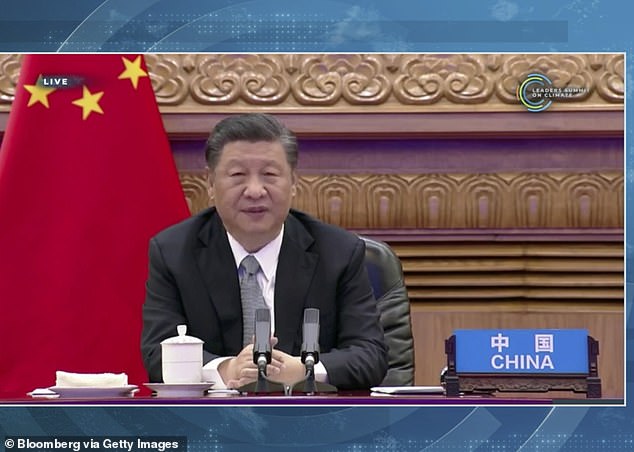 China is already pushing back against the document

Even if it isn’t named directly, Beijing isn’t waiting to push back.

‘The days when global decisions were dictated by a small group of countries are long gone,’ a spokesman for the Chinese embassy in London told Reuters.

‘We always believe that countries, big or small, strong or weak, poor or rich, are equals, and that world affairs should be handled through consultation by all countries,’ the spokesman added.

The G7 leaders also have agreed to coordinate their efforts to keep supply chains online amid semiconductor shortages and other challenges.

‘There was commitment to take action in response to what we’re seeing,’ said the official, who spoke on the condition of anonymity during a press call.

I heard from everyone that what binds us together as a G7 partnership, more than anything else, are the shared values of democracies. And that, because of that partnership, you know, it’s our obligation to call out human rights abuses and other — other violations of fundamental freedoms that calls us into — that really invoke our shared values.

The administration’s hope for a strong statement has met resistance from some European allies, with Germany and Italy showing more hesitancy about a direct statement.

The White House is pushing for strong language that would call out China for forced labor, child labor, and treatment of Muslim Uyguher’s in Xinjiang Province.

These included ‘working together to respond to China’s non-market economic practices that are harmful and distorted to the global economy.’ Western nations have long chafed at China’s child labor and other practices. The leaders are also ‘willing to speak out on human rights abuses, including in Xinjiang’ – a reference to the treatment of Uyghurs and other minorities.

The State Department has labeled their treatment ‘genocide.’

‘Genocide and crimes against humanity occurred during the year against the predominantly Muslim Uyghurs and other ethnic and religious minority groups in Xinjiang,’ according to an agency 2020 report on human rights practices in China.

The nations have also agreed on ‘taking action’ when it relates to supply chains, ‘including from Xinjiang..

Reuters reported that through the structure of the World Trade Organization, China would be designated as a ‘non-market economy’ in a way that would set up a process to determine if Chinese exports are being sold at unfair prices – which could allow for retaliatory duties.