Bitter legal row over Donald Campbell’s Bluebird: Museum begins court action to secure return of record-breaking jet boat as diver who restored craft after recovering it from Coniston Water refuses to hand it over

A museum has launched legal action to secure the return of Donald Campbell’s restored Bluebird, which sank to the depths of Coniston Water 54 years ago.

The wreckage of the hydroplane – the Bluebird K7 – spent decades underwater after Mr Campbell, 45, was killed when it flipped and broke in half on January 4, 1967.

It was given to the Ruskin Museum in Coniston, Cumbria, by his family, and later sent to engineer Bill Smith, who has worked to rebuild the vessel since it was located in 2000.

The museum has now asked for the boat to be returned after their relationship ‘broke down’, and a bitter legal dispute has emerged between the two parties.

Mr Smith, 54, whose restored Bluebird made its return to water on Loch Fad, Scotland, in 2018, has refused to return the boat in its entirety, instead saying it should be taken apart and divided.

He claims his team – the Bluebird Project – had restored around ‘half a boat’ while the other half was built ‘from scratch’ inside his workshop in North Shields. 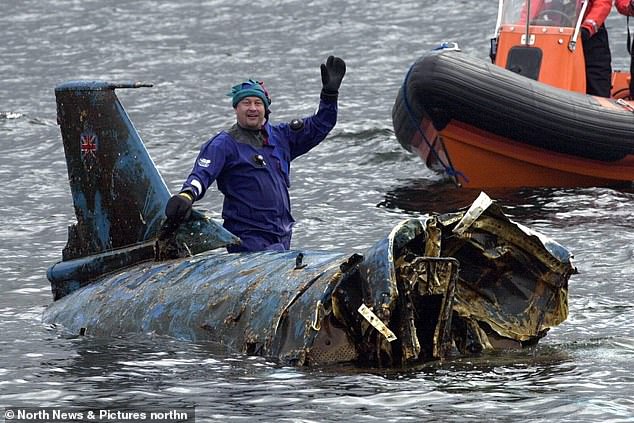 The wreckage of the hydroplane (above in 2001) – the Bluebird K7 – spent decades underwater after Donald Campbell, 45, was killed when it flipped and broke in half on January 4, 1967 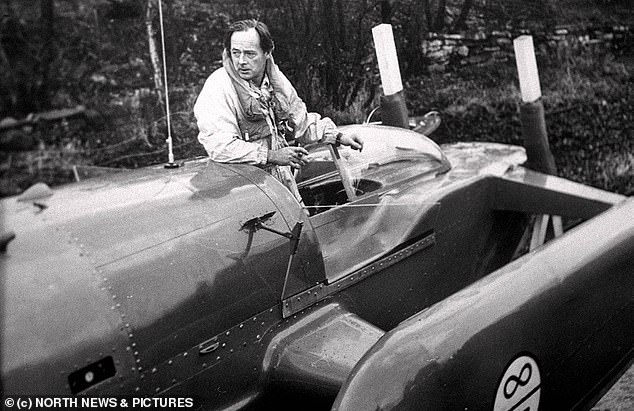 Under Mr Smith’s proposal, Ruskin Museum would be given the original components – the wreckage – while his team would keep the remainder of the vessel.

‘It’s a tragedy, but it’s their tragedy,’ he said. ‘We have achieved what we set out to achieve. All they can have is bits of metal.

‘They can’t have our memories, our experiences, the places we have been, the things we’ve done through the Bluebird Project.

‘That’s ours to keep. When you look at it on the scale of what you get from it, emotionally and experience-wise, some bits of tin-ware going down the road, it’s nothing in comparison.

‘The museum was given half a boat in 2006. We restored their half and we created what was missing from scratch. That part belongs to us.’ 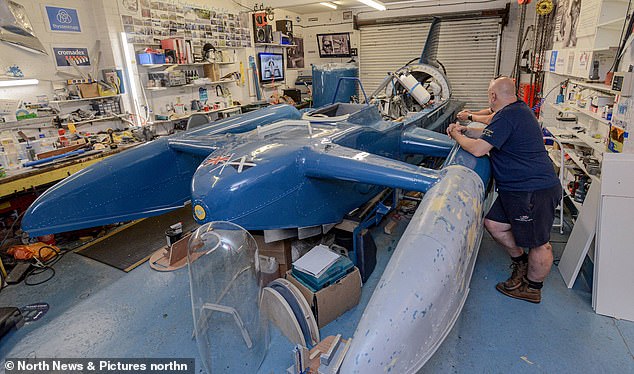 The wreckage was given to the Ruskin Museum in Coniston, Cumbria, by his family, and later sent to engineer Bill Smith, who has worked to rebuild the vessel since it was located in 2000 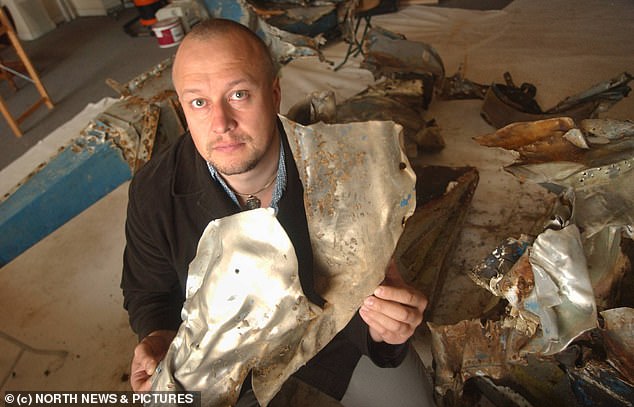 Mr Smith, 54, whose restored Bluebird made its return to water on Loch Fad, Scotland, in 2018, has refused to return the boat in its entirety, instead saying it should be taken apart and divided

Trustees of the Coniston Institute and Ruskin Museum say they were initially ‘grateful to Mr Smith and relieved’ when he offered to restore the vessel to her former glory.

They hope to see the boat displayed at their building near Coniston Water, under plans which would allow Mr Smith to take it out on the water for 90 days a year.

However, this proposal came with a caveat that would require the craftsman to seek permission from a committee before launching the vessel.

The result is a desperate legal wrangle, with the museum wanting the boat back in its entirety, while Mr Smith says it will be taken apart and divided.

This would see the original components, in essence the wreckage, returned to Ruskin Museum, while Mr Smith retains the rest of the vessel.

‘The only deal we had initially was that they would display it and we would operate it and maintain it,’ he said. 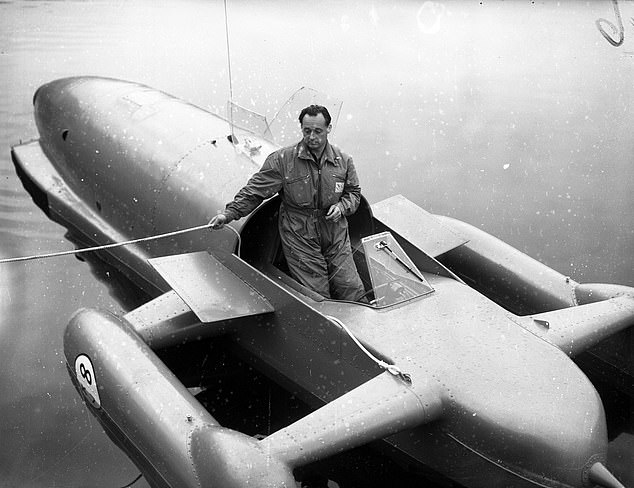 Under Mr Smith’s proposal, Ruskin Museum would be given the original components – the wreckage – while his team would keep the remainder of the vessel 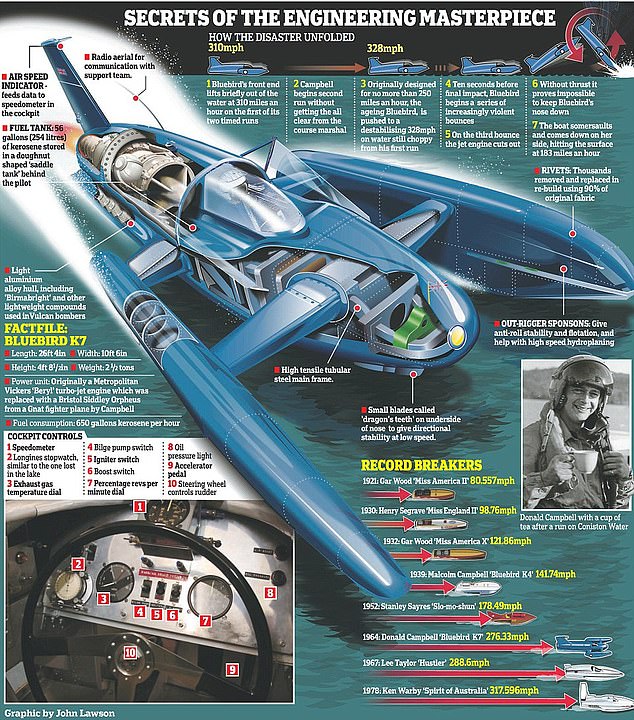 ‘They said that they would give us 90 days access to the boat, but only subject to the approval of the committee.

‘What we wanted was 90 days unencumbered access. Taking a boat out on water is very weather dependent and decisions need to be made quickly.

‘If we had been asked to build a museum piece we would not have agreed. We accepted an offer to build a fully operational boat and that’s what we did.’

Mr Smith and his team took Bluebird to Loch Fad on the Isle of Bute in August 2018, where she launched for the first time since her demise half a century earlier.

Mr Campbell set a world water speed record of 276.33mph in Bluebird in at Lake Dumbleyung in Australia three years before his death. The current record is 318mph.

His daughter Gina Campbell has called for the Bluebird to be returned to the museum, where it was donated following her father’s death.

Mr Campbell was killed whilst making a bid for his eighth water speed record in January 1967, attempting to raise it to over 300mph on Coniston Water. 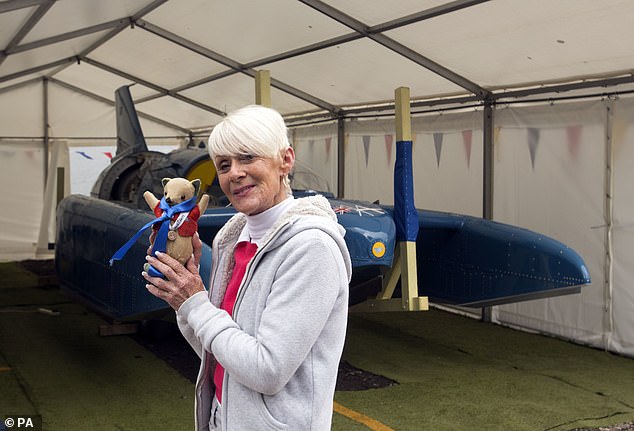 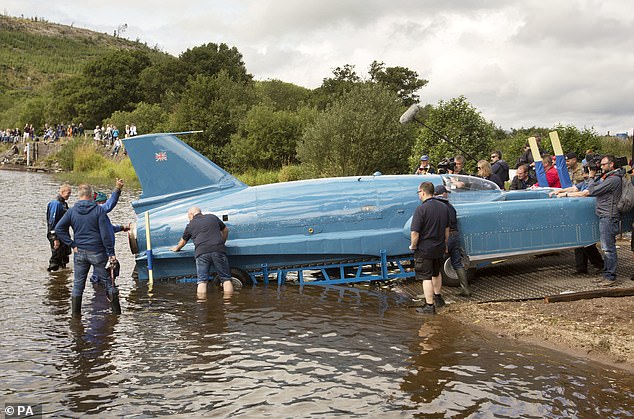 The restored Bluebird K7, which crashed killing Donald Campbell in 1967, before it took to the water in Scotland in 2018 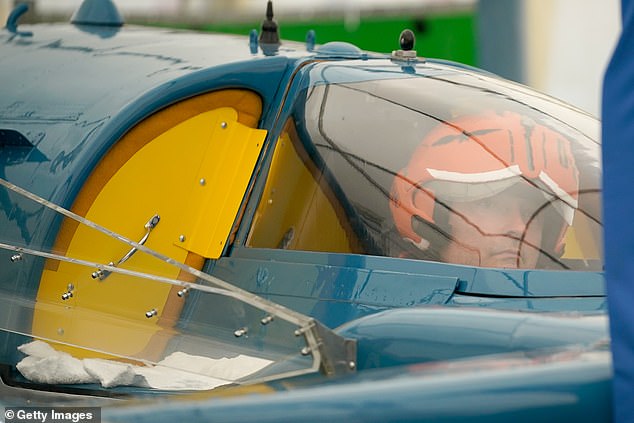 The museum insists the ‘original aim’ of the project was to rebuild the boat for permanent display in their purpose built Bluebird Wing, which cost £800,000.

A spokesperson for the museum said: ‘It is with profound sadness that the Trustees of the Coniston Institute & Ruskin Museum can confirm they have started the process against Bill Smith and The Directors of The Bluebird Project to gain possession of their property namely the record breaking jet hydroplane K7 formerly owned by Donald Campbell CBE.

‘This action is very much the last resort, with relationships having irretrievably broken down in late 2019, following efforts by The Museum and the Campbell Family Heritage Trust (CFHT) who gifted the boat to The Museum in 2006, to find an amicable solution to the claims made by Mr Smith regarding ownership and his intentions for the boat.

‘It is not our intention to comment further on this dispute in public but rather allow matters to be addressed by the lawyers who represent each party.’

Jeff Carroll, Vice Chairman of the The Coniston Institute & Ruskin Museum, added: ‘It is not my understanding that the boat will be broken up, and the wreckage returned to us.

‘We are calling for Bluebird to be returned to the museum in one piece.

‘Mr Smith talks about ownership but that can only be decided by a court.’

A father and son who spent their lives breaking records 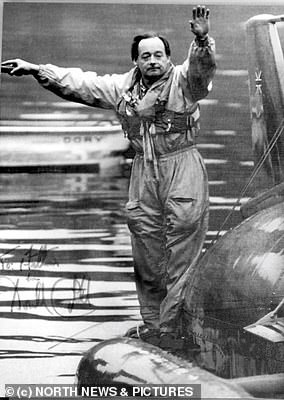 Sir Malcolm Campbell was born on March 11, 1885, in Chislehurst, Kent

Sir Malcolm went on to win the 1927 and 1928 Grand Prix de Boulogne in France driving a Bugatti T37A.

When war broke out in 1939, he built his own vast bomb shelter at his Headley Hall home in Epsom, Surrey.

He also installed a fortified trophy cabinet in his cellar after winning the Segrave Trophy in both 1933 and 1939.

His son, Donald Campbell, followed in his footsteps to break eight world speed records on water and land in the 1950s and 1960s.

He remains the only person to set both world land and water speed records in the same year.

Donald died on January 4 1967 aged just 45 when his jet-powered boat, Bluebird K7, flipped into the air and disintegrated as he attempted a new water speed record on Coniston Water in Cumbria. 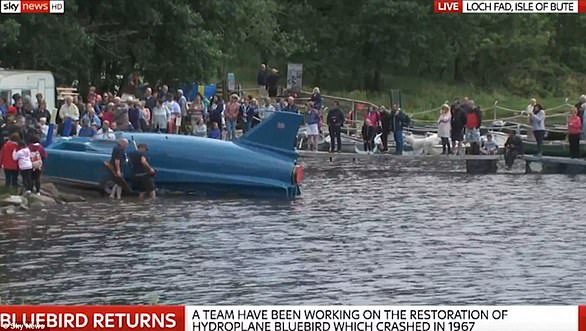 The hydroplane returned to the water near the Isle of Bute, Scotland, in 2018

His final moments were captured on a chilling few seconds of film, and in a haunting recording of his last words: ‘She’s tramping, the water’s not good, I can’t see much, I’m going, I’m on my back, I’m gone…’

It later emerged that the speed ace was decapitated by Bluebird’s windscreen exploding at 300 mph.

He was posthumously awarded the Queen’s Commendation for Brave Conduct.

In 2001 Campbell’s body – with his race suit intact – and the wreckage of Bluebird were recovered from the depths of the lake and he was buried later that year in the village of Coniston.

In 2010 an English Heritage blue plaque was installed to commemorate Sir Malcolm and his son at Canbury School, Kingston Hill, Kingston upon Thames, where Donald was born in March 1921 and the Campbells lived until late 1922.