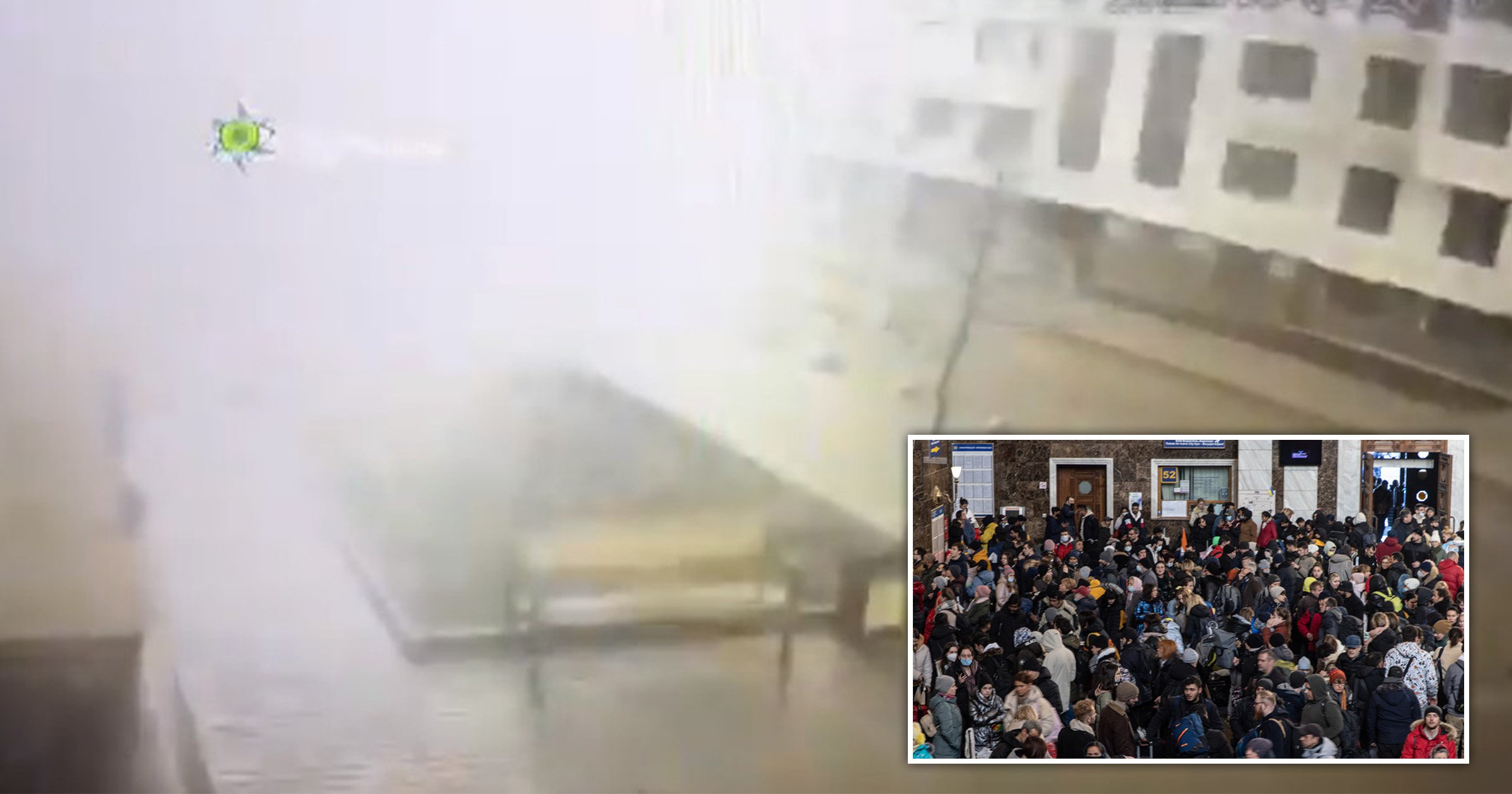 A Russian missile struck close to one of Kyiv’s main railway stations last night as thousands of women and children were being evacuated.

People nearby said they felt the earth shake, and there was no immediate word on casualties.

Trains were still running from the Southern Railway Station and the building suffered minor damage.

Ukraine’s interior ministry adviser Anton Herashchenko said the blast was caused by wreckage from a downed Russian cruise missile, rather than a direct rocket attack.

He said the strike may have cut off central heating supply to parts of the city, as its people face freezing winter temperatures.

Footage filmed from windows overlooking the Ukrainian capital showed a huge explosion lighting up the night sky and appearing to cause a shockwave.

The office of Ukrainian President Volodymyr Zelensky said a missile strike was made near the country’s Defence Ministry.

Unverified reports said two missiles were launched towards the headquarters – which sits across the road from the railway station – one of which was shot down.

The Southern Railway station is one of two stations that make up the main complex that thousands have used to evacuate Kyiv over the past week.

The two stations are connected by an overhead corridor that crosses over around a dozen tracks.

But Ukrainians denied Russia’s claim that its forces had taken the Black Sea port of Kherson.

Zelensky adviser Oleksiy Arestovych said: ‘The city has not fallen, our side continues to defend.’

A US official also said control of the southern city remained contested and said Russian forces appeared to be getting more aggressive in targeting infrastructure inside Kyiv as its advances slow in the face of fierce Ukrainian resistance.

The invasion has yet to achieve Russian President Vladimir Putin’s aim of overthrowing Ukraine’s government and his forces are thought to be way behind schedule.

But the invasion has sent more than one million people fleeing to other countries and jolted the global economy as governments and companies and governments line up to isolate Moscow.

The United Nations General Assembly voted overwhelmingly to deplore the invasion ‘in the strongest terms’.

It demanded that Russia withdraw its forces in a resolution backed by 141 of the assembly’s 193 members.

French President Emmanuel Macron hailed the courage of Ukrainians faced with a war he said was Putin’s responsibility alone.

In a televised address, he said: ‘The days ahead are likely to be increasingly difficult.’

After failing to swiftly take major cities and to subdue Ukraine’s military, US officials have said for days that they believe Russia will instead seek to encircle cities.

By doing this, they can cut off supply and escape routes, and attack with a combined force of armour, ground troops and engineers.

Hopes for a diplomatic way out of the crisis continued to flicker. Ukrainian presidential adviser Mykhailo Podolyak said a Ukrainian delegation had left for a second round of talks with Russian officials on a ceasefire after a first round made little progress on Monday.

President Zelensky has said Russia must stop bombing his country if it wants to negotiate.

Russia-Ukraine war: Everything you need to know

Russia’s invasion of Ukraine has entered its seventh day, with the attacks beginning on February 24.

Since then, Ukraine has suffered widespread damages and loss of life amid Russia’s major bombing campaign.

The majority of attacks have been focused in the capital city of Kyiv, where  Ukrainian President Volodymyr Zelensky is currently based.

Russian President Vladamir Putin is prepared to resume talks with Ukraine tonight in bid to end war, according to a Kremlin spokesperson.

Follow Metro.co.uk’s live blog for rolling coverage of conflict as it happens.