Boris Johnson today insisted he will being forward ‘good plans’ on social care as it emerged a ‘do or die’ meeting with Rishi Sunak and Matt Hancock has been postponed.

The PM reiterated his vow to ‘fix’ the crisis in the system as he faces anger from campaigners who are still waiting for any indication of a strategy from the government.

Asked about the crucial issue during a visit to a laboratory in Hertfordshire, he told reporters: ‘We are pledged to fix it and we must fix it for our country and for our society.

‘Social care workers have borne the brunt of the pandemic and we have got to improve it, and we will. We will be bringing forward some good plans in due course.’

But there is dismay that progress seems to have stalled again, amid wrangling between the PM and Chancellor over fears costs could hit £10billion a year.

A meeting between the pair and Mr Hancock tomorrow, planned for at least a week, is understood been ‘taken out’ of ministerial diaries for reasons that remain unclear. No10 sources suggested the importance of the session had been overblown.

Mr Johnson first promised to push through social care reforms when he entered Downing Street two years ago, but details have not been forthcoming, with claims ministers want agreement across parties.

The urgency of the situation was underlined last night as shock new figures showed that thousands of desperate families are being lumbered with crippling average bills of £35,000 a year.

The huge costs leave dementia sufferers with far less to hand on to their children and often require the sale of the family home.

A meeting between Boris Johnson (right), Rishi Sunak (left) and Matt Hancock (centre), planned for at least a week, is understood been ‘taken out’ of ministerial diaries for reasons that remain unclear

Mr Johnson is said to be in favour of a lifetime cap on the cost of care of £50,000, as proposed by economist Sir Andrew Dilnot a decade ago.

The average length of stay in residential care is two years, meaning a cap set at this level would help thousands of people.

But the Chancellor is concerned about the costs – which could end up approaching £10billion a year. He has also said Tory governments should not do anything which could force an increase in personal taxation.

Before the meeting was delayed, Mr Hunt wrote in the Mail that it was a ‘do-or-die moment for social care’. ‘Rather than put our heads in the sand and hope the problem goes away, it is time to grasp the nettle. Come on Boris!’ he said.

Figures compiled by business analysts LaingBuisson and published by Which? show that in the decade since Sir Andrew brought forward his idea for a cap, care costs have soared.

The figures, which cover the amount paid both by local councils and those who fund their own care, mask the fact that self-funders pay even more than this.

LaingBuisson said self-funders are typically charged 30 per cent more than councils – meaning the average annual cost of a residential care home place will actually be much more than £35,000. And the figures hide a desperate postcode lottery, with families in London and the South East having to pay significantly more.

Gavin Terry, of Alzheimer’s Society, said: ‘The pandemic laid bare the dire state of social care and the Government must now act. We must ensure families being bankrupted by care fees and woefully inadequate care provision are a thing of the past.’

Caroline Abrahams, of Age UK, added: ‘Despite the efforts of the good people who work in social care, it’s impossible to escape the conclusion that social care in England has become a miserable embarrassment.’

A spokesman for the Department of Health and Social Care said: ‘Ensuring we have a care system that is fit for the future remains a top priority and we will bring forward proposals for social care reform later this year.’

The Mail has been waging a long-running campaign to end the care crisis. And the Health Secretary is also eager for a solution to be agreed at tomorrow’s meeting, believing the situation has been left to fester for too long

JEREMY HUNT: It’s a do or die moment for my party over social care fees

Rarely has a behind-closed-doors shadowy Whitehall meeting mattered so much to the lives of so many. Tomorrow, if rumours are correct, Boris Johnson will sit down with Rishi Sunak and Matt Hancock to decide whether or not to keep his manifesto promise on social care.

I wanted Boris’s job in Downing Street and fought with every breath I had to beat him. But even I, his vanquished rival, had to take my hat off to the big-heartedness of the promise he made on the steps of Downing Street when he got the job.

Those words brought hope to millions: ‘I am announcing now – on the steps of Downing Street – that we will fix the crisis in social care once and for all with a clear plan we have prepared to give every older person the dignity and security they deserve.’

Optimistic words from a prime minister who has made defying the ‘gloomsters’ his trademark. And now we need that optimism more than ever to turn Britain into a country where everyone can face the prospect of old age with confidence and security. For that they need to know there will be a decent safety net to make sure everyone gets the care they need – just like the NHS does for health.

They also need to know the loved ones they leave behind won’t lose all their savings if they end up with dementia and having to pay expensive care home fees.

But is it too expensive? Understandably some of our national bean-counters are worried it may be, with our national finances shot to pieces by the pandemic. 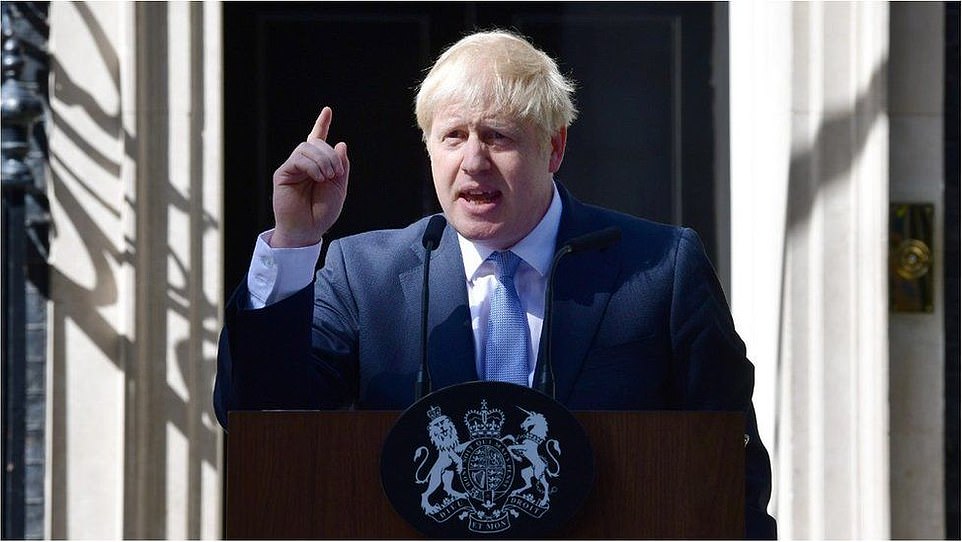 My select committee said last year that this broken system needs a minimum of £7billion more added to its budget every year – an eye-watering sum.

But that was not right away – rather a sum to build up to over the years ahead.

Look underneath the numbers, which the Health Foundation helped us to calculate, and in the short term they are pretty manageable. For example, if the proposals for a cap on care costs – as recommended by Andrew Dilnot – were introduced from April 2023, the additional annual cost would be less than a billion pounds a year in the last year of the parliament.

Not small change by any means – but easily manageable compared to the £23billion we already spend on adult social care annually. The costs do then go up significantly – but crucially not in the immediate post-pandemic period when we are having to fund other pressures such as the NHS backlog.

There are of course other things we need to fix too – in particular merging the system with the NHS and making sure local authorities can fulfil their duties.

But we will have to pay many of these anyway because they are caused by increases in the number of older people and promised rises in the national living wage.

We also need to consider what will happen if we do nothing, as I know to my cost from my time as health secretary: the system will just carry on doing what it always has done and export its most vulnerable patients back into NHS hospitals.

Nothing could be worse as we try to bring down the waiting times for five million people – and we are guaranteed winter crisis after winter crisis when hospitals fill up. So rather than put our heads in the sand and hope the problem goes away, it is time to grasp the nettle.

Come on Boris! On top of what we are going to have to pay anyway – because of demography and manifesto commitments to protect people’s homes – the additional amounts necessary are much smaller than the headline figures. Japan and Germany have both grasped the nettle – surely we can too?

Tomorrow is a do-or-die moment for social care. Conservatives have always respected the different generations that make up the fabric of our society.

It’s time for this Conservative government to get this done so we can all sleep soundly at night knowing that whatever fate throws at us, we live in a society where every single older person will be treated with dignity and respect. 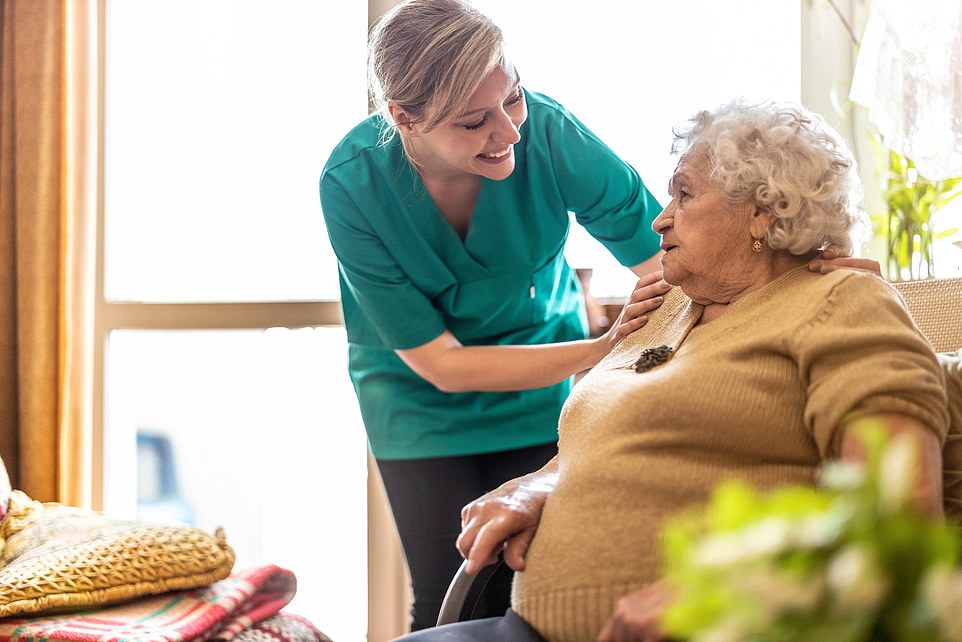 It’s time for this Conservative government to fix social care so we can all sleep soundly at night knowing that whatever fate throws at us, we live in a society where every single older person will be treated with dignity and respect [Stock image]