Brandon Lewis accused of saying rape is 'much lesser' than murder

A Cabinet Minister is embroiled in a row over claims that he downplayed the seriousness of rape while discussing plans to give Irish terrorists an effective amnesty for crimes during the Troubles.

Northern Ireland Secretary Brandon Lewis faced accusations that he had said rape was a ‘much lesser offence’ than murder.

Sources told The Mail on Sunday that Mr Lewis used the phrase in private last week to justify rejecting calls for the proposed Troubles amnesty from prosecution to exclude rape offences.

They said the Northern Ireland Secretary insisted it would be wrong to offer offenders legal immunity for murders but refuse to do so for serious sexual offences. 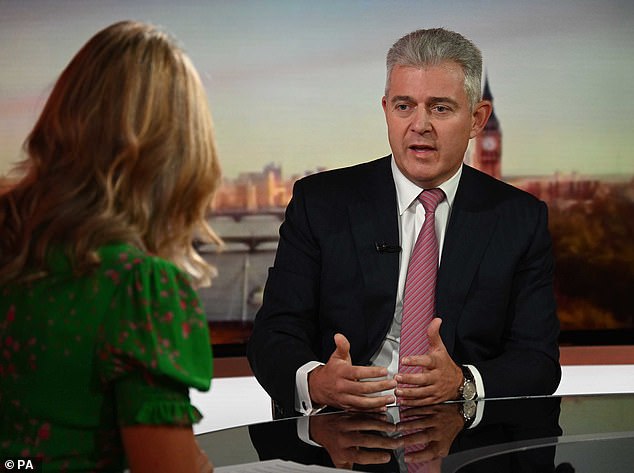 However, MPs disagreed and forced the government to agree to say explicitly that rape offenders would be excluded from the Northern Ireland ‘legacy and reconciliation’ proposals. Yesterday, Labour MP Jess Phillips – who is campaigning for justice for the 21 killed in the 1974 Birmingham pub bombings, said it was ‘crass and insensitive’ to compare the seriousness of rape with murder.

But Mr Lewis’s office denied last night that he had said rape was much less serious than murder, insisting he had made it clear that ‘rape is a heinous crime’. It came as the Government pressed on with proposals to draw a line under prosecutions for offences by either side in the Troubles from the late 1960s to the Good Friday Agreement in 1998.

Under the plans, a new Independent Commission for Reconciliation and Information Recovery will be able to grant immunity from prosecution if it is satisfied that an individual has provided the truth to the best of their knowledge and belief.

But they are opposed by all the main parties in Northern Ireland, while Irish foreign affairs minister Simon Coveney raised fears that many families affected would feel this ‘may be more about protecting perpetrators instead of pursuing justice and getting to the truth’.

Birmingham Yardley MP Ms Phillips said the plans were ‘not good enough’ for the ‘21 people lying dead with no justice’. MPs from across the political divide also protested last week that the immunity offer would extend to rapes.

They refused to accept Northern Ireland Minister Conor Burns’ insistence that although rape was a ‘hateful, heinous crime’, the Government did not believe it could be classed as ‘being Troubles-related’.

Former Northern Ireland Secretary Julian Smith said he had seen letters to ‘rape victims declaring that they are victims of Troubles-related activity’, adding: ‘How do they avoid their perpetrators being able to seek an amnesty?’

SDLP MP Colum Eastwood said: ‘We know cases in which members of paramilitary organisations raped members of our community. ’

The Government accepted Labour spokesman Peter Kyle’s call to exclude certain sexual offences from immunity. Mr Lewis’s office said as a mark of the seriousness with which he regarded rape, ‘we will bring forward an amendment tomorrow to make explicitly clear that the commission cannot grant immunity for sexual offences’.

Privately officials say this is simply a ‘clarification’ of what had always been intended.