British tourists wallowed in glorious sunshine and temperatures of 82F (28C) as many admitted that they were enjoying soaking up the rays and having the beach virtually all to themselves.

Thousands of Brits flocked to the Algarve yesterday, after Portugal allowed non-essential travel, but many preferred to kick off the first full day of their break lounging by hotel pools or enjoying a drink rather than flock to the region’s picture postcard beaches.

Patrick Ryan, 40, from Ruislip, West London, sat beside the beach in Albufeira, normally one of the most popular destinations for British tourists.

He said: ‘I was expecting it to be a lot busier but it’s actually lovely to see the beach not too busy. It feels as if I’ve got it all to myself and I’m loving just sitting in the sun and getting some Vitamin D. 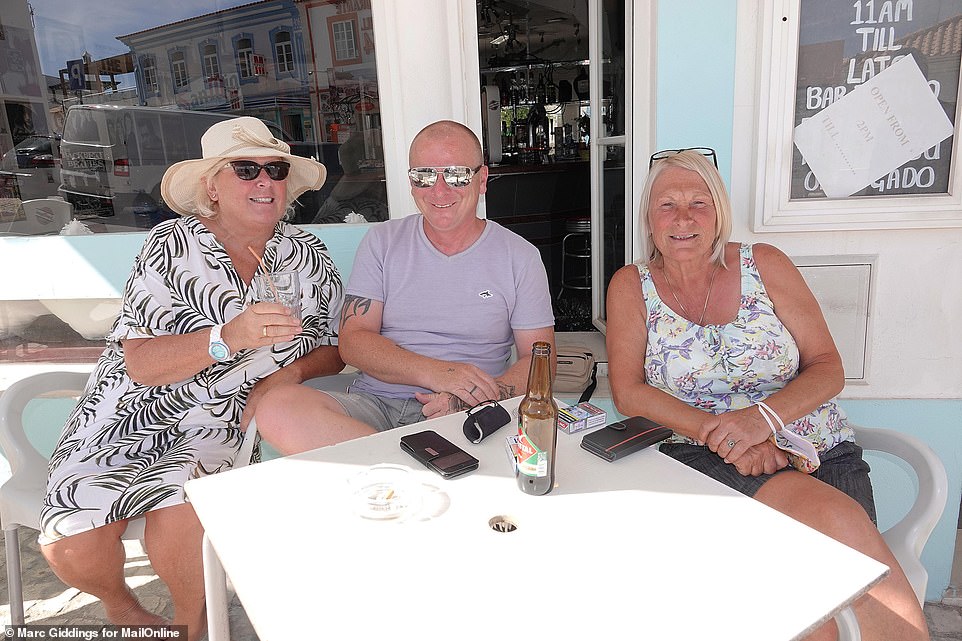 (From left) Susan Jones, 64, and her two friends, Paul Walker, 45, and Jennifer Wallace, 61, kicked off their holiday in Albufeira today with a few drinks outside Tunes bar, a popular British haunt. 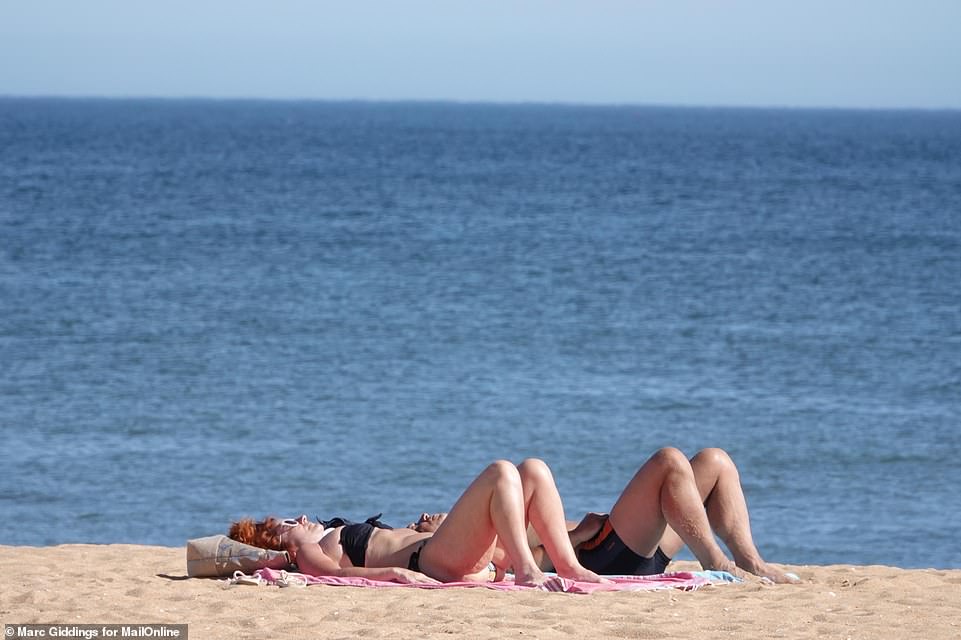 Rachel (pictured left) from Essex, said in Albufeira today: ‘I’m going to lie on the beach for the whole week that I’m here’ 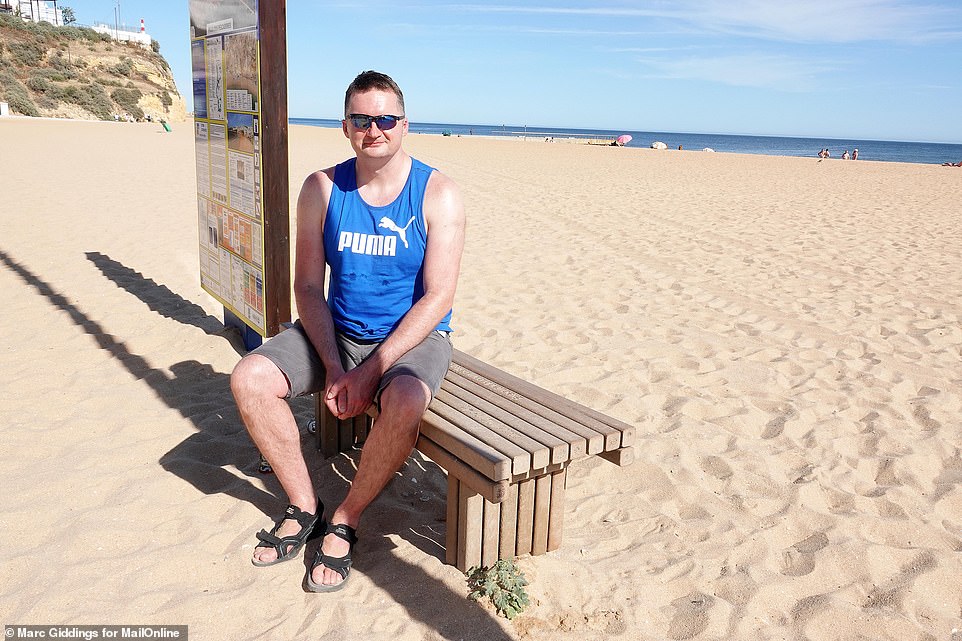 Patrick Ryan, 40, from Ruislip, West London, sits beside the beach in Albufeira as he speaks to MailOnline this morning 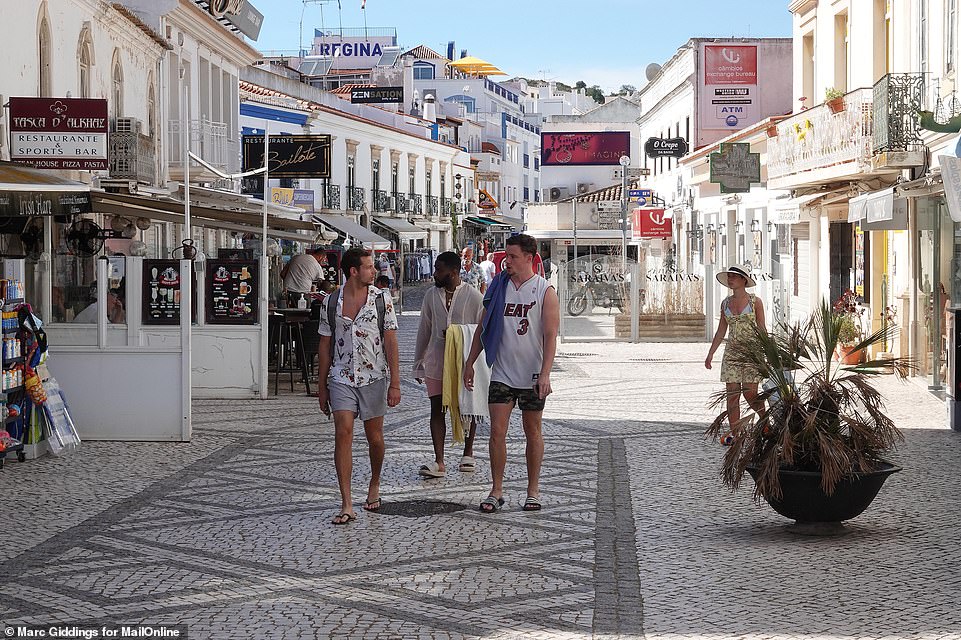 People walk today through a very quiet Albufeira, which is normally one of the most popular destinations for British tourists 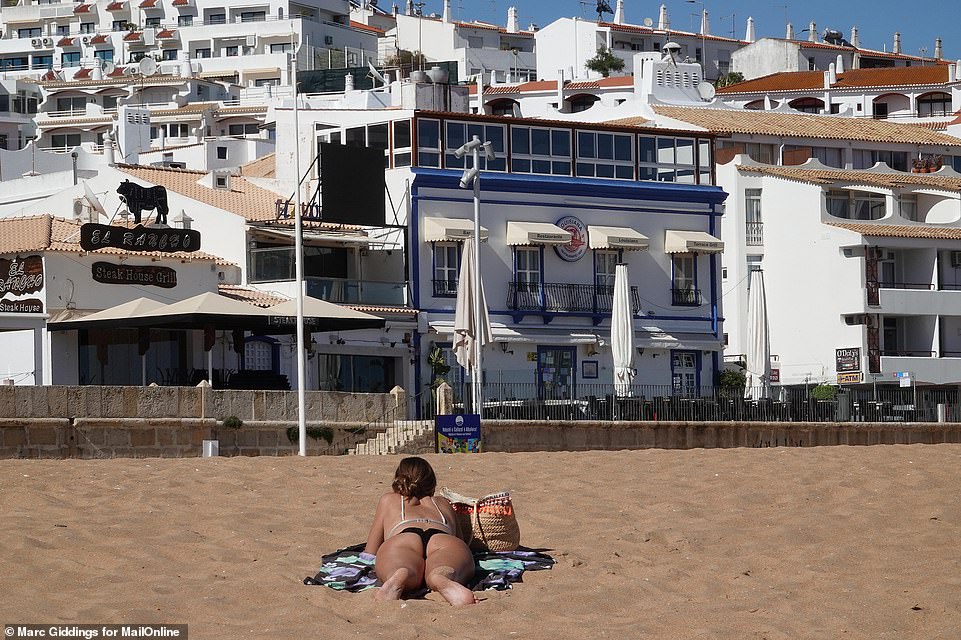 Thousands of Brits have flocked to the Algarve after Portugal allowed non-essential travel. Albufeira is pictured today

‘My flight from Stansted Airport on Monday was very busy but I think most Brits are probably nursing hangovers and haven’t been able to get to the beach yet.

‘I really needed to get away because it’s been a difficult year and I’ve been on furlough, so I just want to sit in the sun for the whole week.’

One couple from Essex were fast asleep on the beach having flown in on Tuesday morning from Stanstead.

Rachel, who did not want to give her full name, said: ‘Just look at how pale I am. I needed to get away from the rain and into the sun. I’m going to lie on the beach for the whole week that I’m here.’ 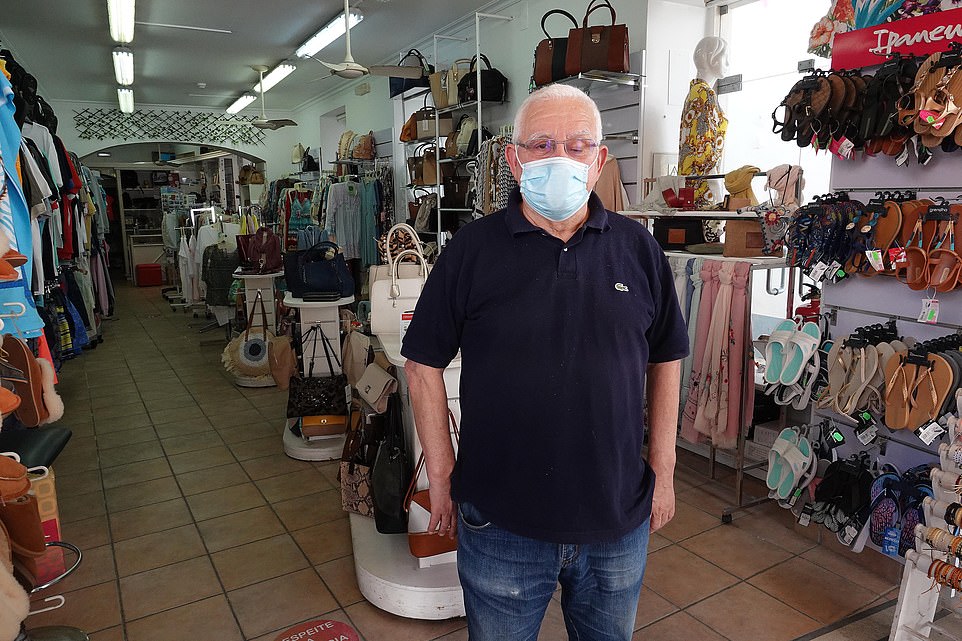 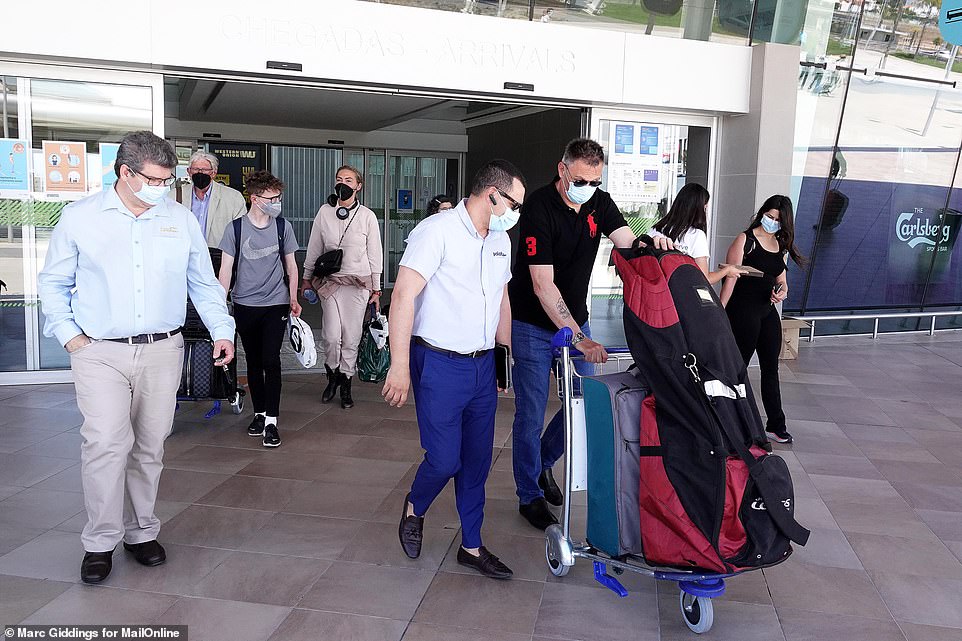 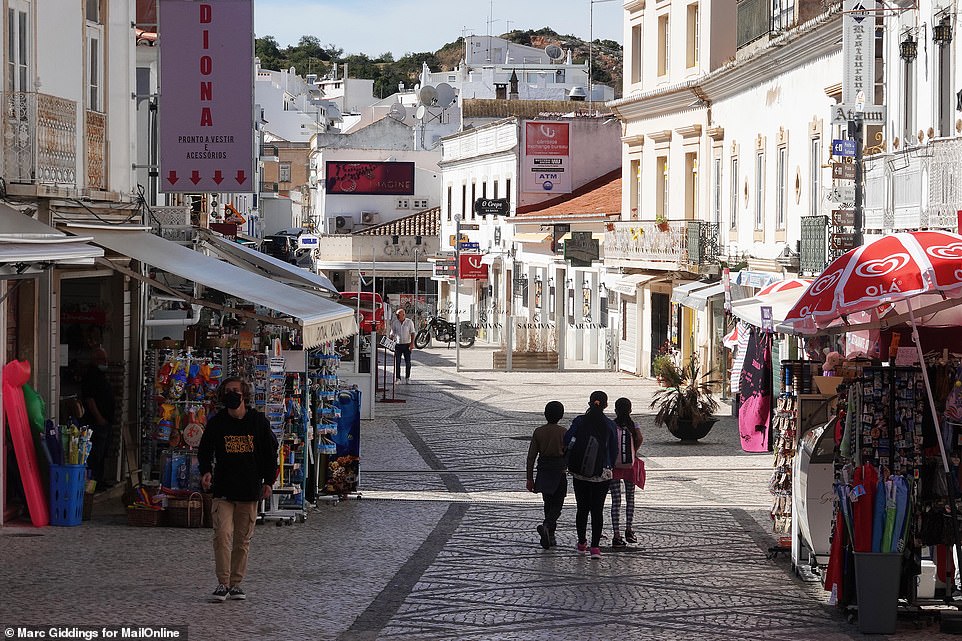 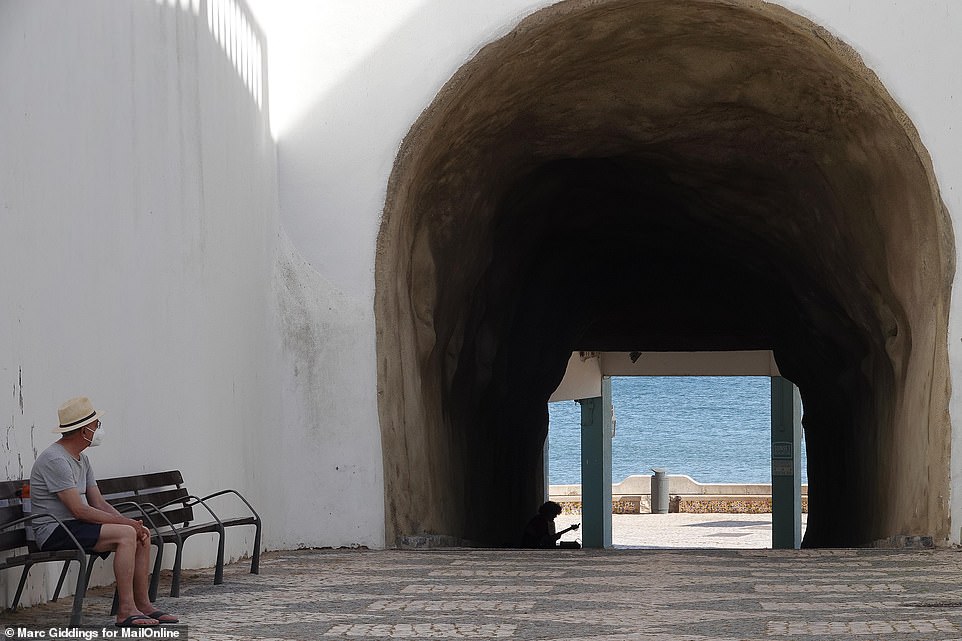 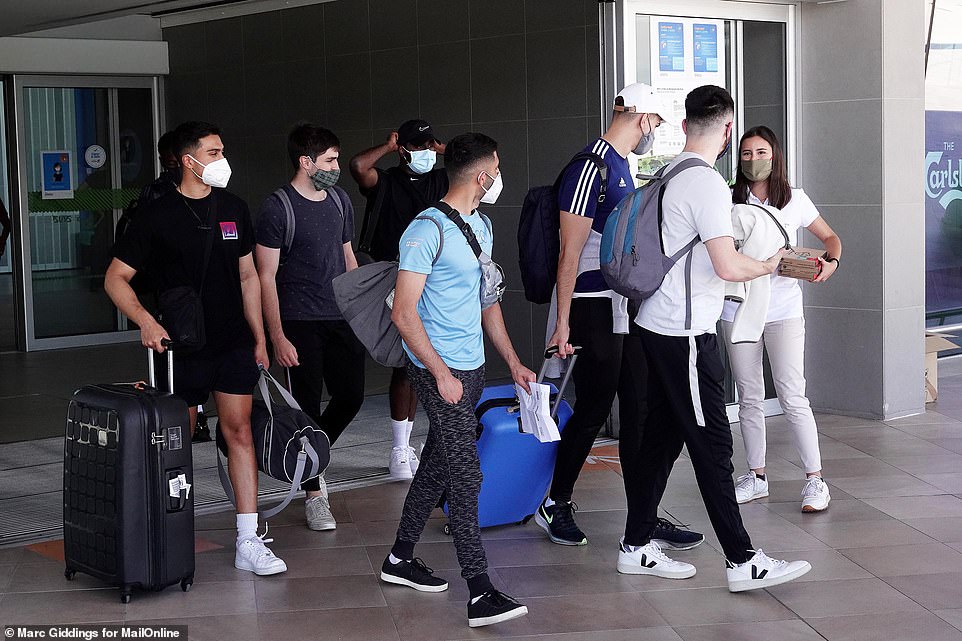 Susan Jones, 64, and her two friends, Paul Walker, 45, and Jennifer Wallace, 61, kicked off their holiday with a few drinks outside Tunes bar, a popular British haunt.

Mr Walker said: ‘We’ll eventually get to the beach, but I had to have a beer first. That’s the way I like to start my day when I’m on holiday.’

Ms Wallace, who is works behind the bar said: ‘We only opened up last week in time for the arrival of the Brits. I’m a bit surprised that it’s not busier but I’m sure that things will pick up.

‘Financially, the past year has been a disaster and we can’t wait for British tourists to return in full numbers. They love coming here for the traditional pub atmosphere and have a knees up to British music.’ 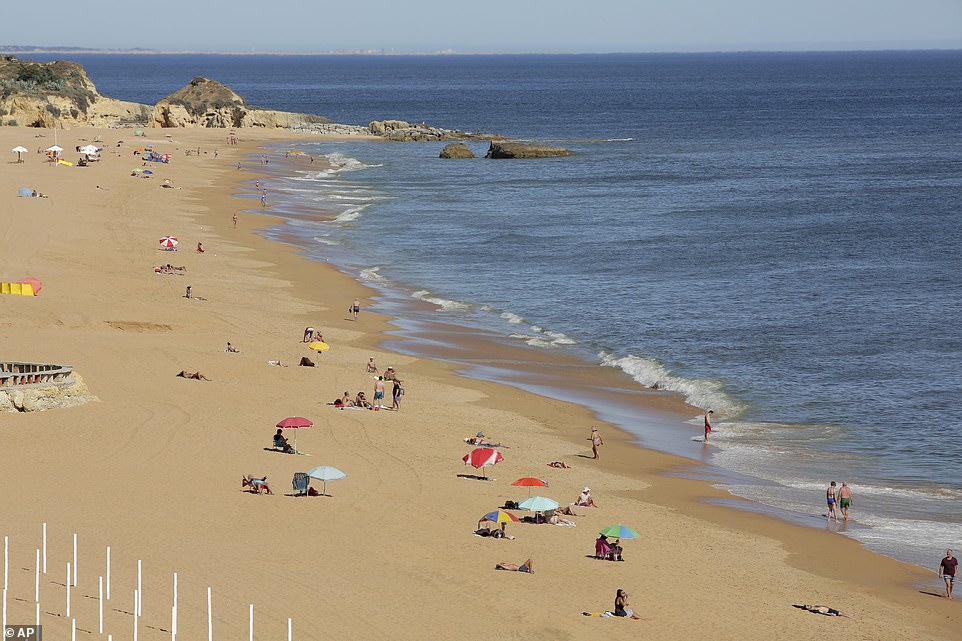 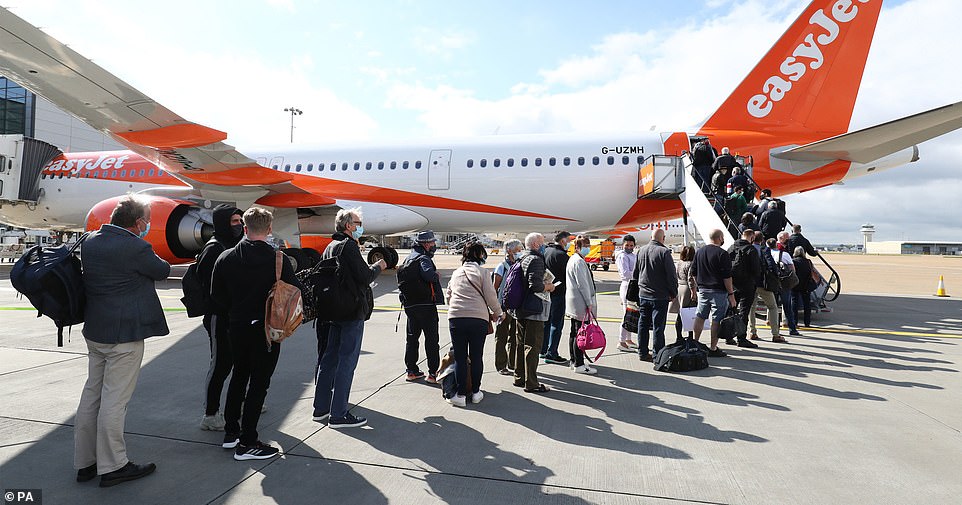 Businesses in Albufeira have been closed for much of the past year and only re-opened last week in anticipation of a return of British tourists.

Jose Dominguez, 74 who runs Diona, a beachwear shop said: ‘Financially, I’ve really struggled and haven’t made any money over the past year. Most of my customers are from the UK and because of the pandemic, they’ve not been able to come.

‘I’m delighted that they’re now allowed to travel here but my worry is that it’s going to take a long time for businesses like mine to recover.

‘I must admit that I thought it was going to be a lot busier and my worry is that even when tourists do return, they’re not going to have as much money to spend.’