Melbourne’s Eastern Freeway is closed in both directions near Doncaster as a “significant” truck fire sends black smoke billowing over nearby suburbs.

All lanes of the freeway are closed at Elgar Road. 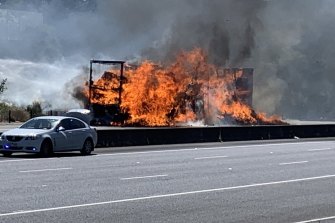 The truck fire on the Eastern Freeway.Credit:Twitter/@MelissaBrownZBC

Chris Miller from the Department of Transport told radio station 3AW the flames looked like they were reaching 20 to 30 feet in the air.

“There’s big, big, big flames,” he said. “Whatever is in this truck is just continuing to burn ferociously.”

He said there had been a number of spot fires on the grass median strip. 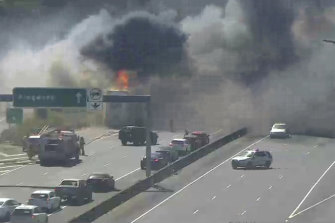 Smoke billowing from the burning truck on the Eastern Freeway.Credit:Twitter/@VicTraffic

Outbound motorists are being advised to exit the Eastern Freeway at Doncaster Road or earlier. City-bound motorists should exit at Middleborough Road or Tram Road.

Doncaster Road provides a good alternative to the Eastern Freeway, a Department of Transport spokesman said. 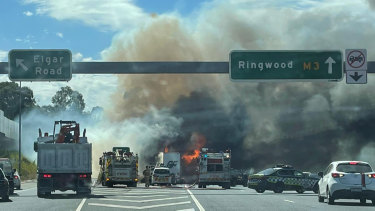 The scene on the Eastern Freeway.

“The scene is under the control of emergency services. The Eastern Freeway will open as soon as it is safe to do so.”

Catch all the day’s headlines

At the end of each day, we’ll send you the most important breaking news headlines, evening entertainment ideas and a long read to enjoy.  Sign up here.