Contagion, which has eerie similarities to coronavirus outbreak, jumps from Warner Bros’ 270th most watched film to its SECOND as disease spreads

Contagion, which has eerie similarities to the coronavirus outbreak, has jumped from Warner Bros’ 270th most watched film to its second.

The 2011 movie, starring Gwyneth Paltrow, Matt Damon and Kate Winslet, tracks a global epidemic as a mystery virus from Hong Kong travels to the United States and kills millions of people.

Almost a decade after its release, Contagion rose more than 260 places on its studio’s most watched back catalog, making the huge leap from 270th in December to number two this week.

It is also tenth highest rented on Apple’s iTunes store, alongside 2019 Oscar winner Parasite and Frozen II. A year ago it failed to make the top 100.

The number of coronavirus cases in New York has now jumped to six after the wife, two children and neighbor of a Manhattan attorney who is currently hospitalized with the disease all tested positive.

In total, the number of cases across the country have soared to more than 130 and nine people have now died from the disease in Washington state. 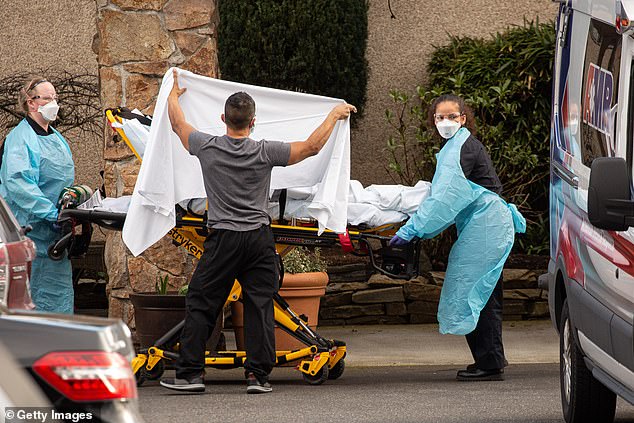 Healthcare workers transport a patient on a stretcher into an ambulance at Life Care Center of Kirkland on February 29, 2020 in Kirkland, Washington 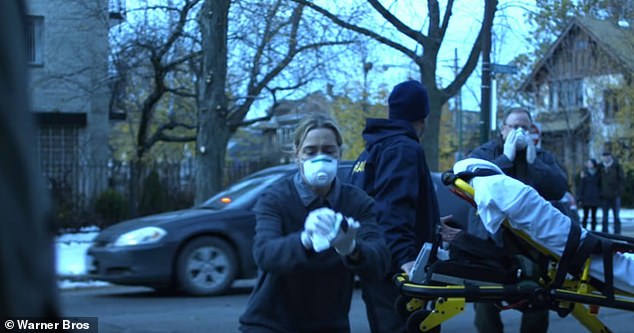 Kate Winslet stars in Contagion. The 2011 movie tracks a global epidemic as a mystery virus from Hong Kong travels to the United States and kills millions of people

Contagion producer Michael Shamberg told BuzzFeed: ‘It was very deliberately designed to be a cautionary film. We got the science right.’

It has seen dozens more reviews on IMDB since January, with many noting the similarities to coronavirus.

Writer Scott Z. Burns told Fortune last month: ‘The similarities between our contagion and the coronavirus are immaterial, accidental, and really not that important.

‘What is more important and accurate is the societal response and the spread of fear and the knock-on effects of that. That is proving to be accurate.’

Contagion tells the story of Beth, played by Gwyneth Paltrow, who dies within 24 hours of returning to Minnesota from a business in Hong Kong. She had exhibited fatigue and cold-like symptoms which she put down to jet lag.

The speed with which the disease spreads is quickly shown as her young son also catches the unidentified illness and also dies. Her husband, played by Matt Damon, is miraculously immune and survives.

The movie also stars Marion Cotillard, Laurence Fishburne, Jude Law and Kate Winslet, as the epidemiologist on a desperate search for a vaccine.

Google searches about how to stream Contagion began to spike as the first cases in the United States were confirmed.

‘For years I said that Contagion is one of the scariest films ever made and now here we are,’ tweeted actor and director Stephen Ford tweeted last month. 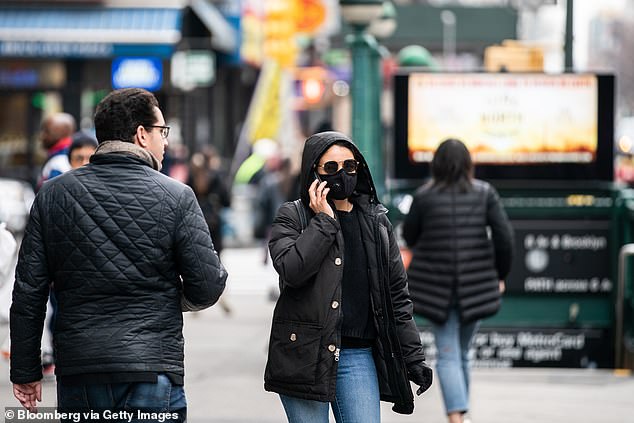 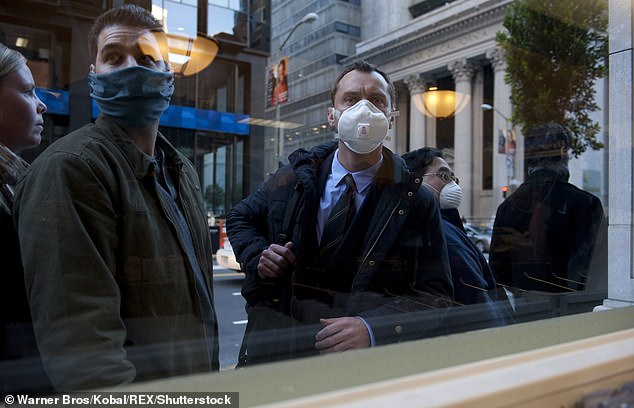 Jude Law, center, stars in the film which quickly drew comparisons to coronavirus

The Warner Bros. movie was first released on September 9, 2011, grossing $135.5 million at the global box office.

It was released alongside a social awareness campaign highlighting what preventative steps can be taken to avoid catching a virus.

The movie was generally praised by the scientific community for accurately depicting how a doomsday epidemic scenario might play out.

It is said to have been modeled on the 2003 SARS outbreak, depicting what might happen if that virus had been even more deadly and contagious.

WHAT YOU NEED TO KNOW ABOUT BEING TESTED FOR CORONAVIRUS

On Tuesday, Vice President Mike Pence announced that any American can be tested for coronavirus as long as a doctor approves it.

The move appears to expand upon previous criteria needed for testing by the Centers for Disease Control and Prevention (CDC).

But how do you determine if you have symptoms of COVID-19 and when you should see a doctor?

We break down everything you need to know about being tested for the virus that has infected more than 120 Americans and killed at least nine.

WHAT ARE THE LATEST GUIDELINES FOR BEING TESTED?

There are three groups of people that the CDC recommends get tested.

1. People with symptoms such as fever, cough or shortness of breath who have been in ‘close contact’ with someone confirmed to have coronavirus

2. Patients with symptoms who have traveled to areas affected by the virus within the last 14 days

3. Those with symptoms who need to be hospitalized and no other cause for their illness is found. They don’t need to have a travel history or exposure to another patient

HOW DOES THIS DIFFER FROM THE PREVIOUS CRITERIA?

When the CDC first began testing, only those with a travel history to China – where the outbreak emerged – or those who had been exposed to a confirmed coronavirus patient were tested.

However, the agency says its criteria for testing is always ‘subject to change as additional information becomes available.’

WHAT TO DO IF YOU NEED A TEST?

Health officials strongly advise that anyone who believes they may be infected not show up unannounced at their doctor’s office in case they expose others to the highly-contagious disease.

Instead, the CDC suggests immediately calling your physician or healthcare provider.

‘Your healthcare professional will work with your state’s public health department and CDC to determine if you need to be tested for COVID-19,’ the CDC’s website states.

If you are suspected of having the virus, you will most likely get tested at a hospital.

The test involves getting a swab of the patient’s nostril and throat. If the patient has a wet cough, a sample of sputum (a mixture of saliva and mucus) will also be collected.

WHY HAS IT BEEN DIFFICULT FOR PEOPLE TO GET TESTED?

There have been multiple reports of people not having accessing to get tested.

The first batch of test kits that the CDC sent to state and local health departments were faulty, which led to a delay.

Secondly, the CDC had strict criteria for testing, which led to missed diagnoses of people who caught the virus from so-called ‘community spread,’ meaning it’s unknown how they were infected.

A third reason is that some health departments did not leave the decision to test up to doctors as the CDC suggested.

For instance, the Massachusetts Department of Public Health initially required doctors to call a hotline to determine if their patients met CDC criteria for testing.

Then, before the test could be administered, it had to be authorized at the State Public Health Lab.

WILL IT BE EASIER TO GET TESTED NOW?

Since the CDC’s testing fiasco, several health departments have either received new kits from the federal agency or made their own.

Additionally, the US Food and Drug Administration expanded its Emergency Use Authorization (EUA) policy so allow more labs can apply for approval to test for the virus.

The CDC that 75,000 test kits are currently available and more are being manufactured.

FDA Commissioner Dr Stephen Han told reporters on Monday that close to one million people would be tested by the end of the week.

But figures from the Association of Public Health Laboratories show that likely no more than 100,000 people would be tested by week’s end.