Asked if he was as useless as per the PM's withering put-down, the Health Secretary yelled through a car window: "I don't think so!" 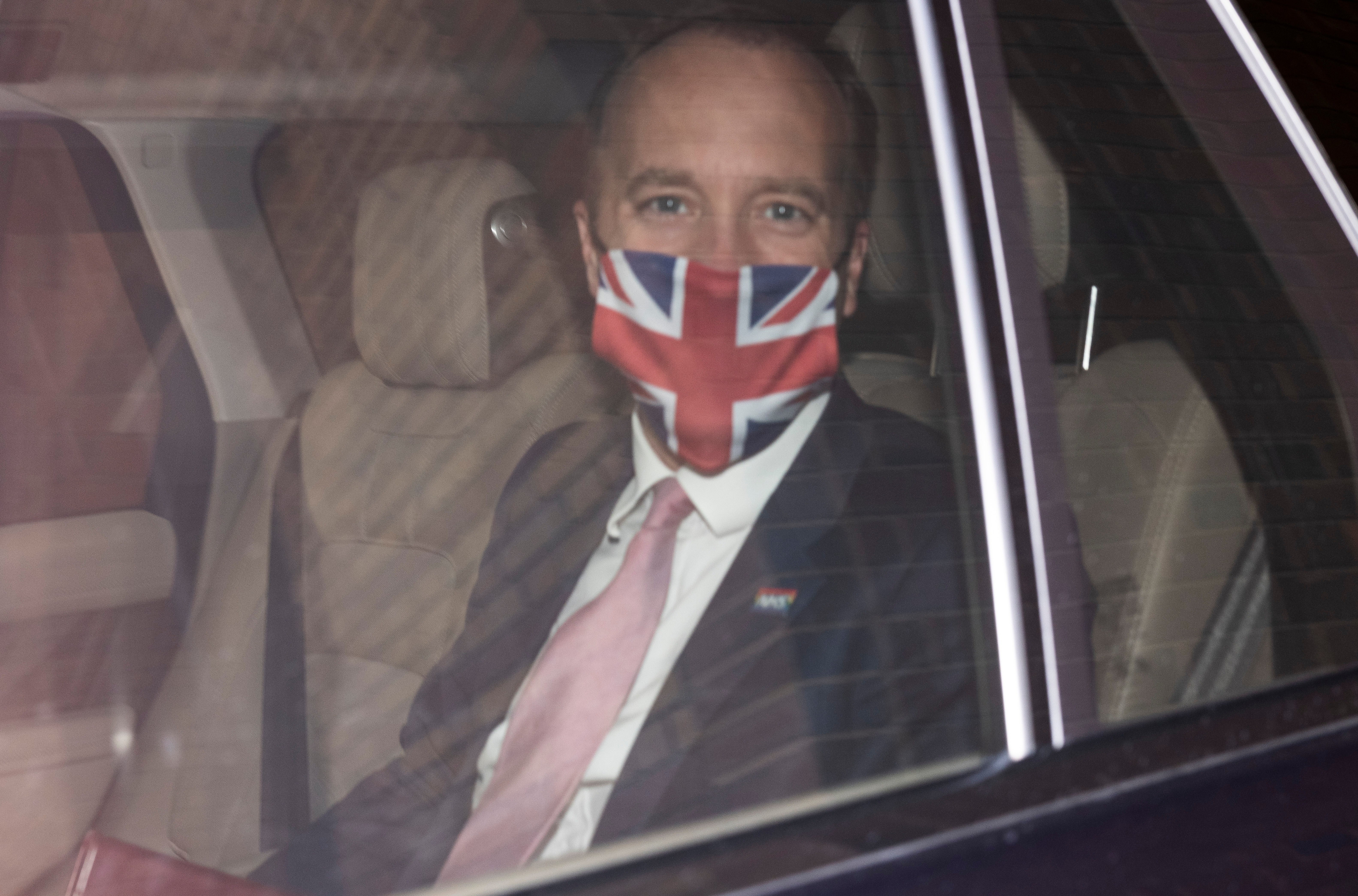 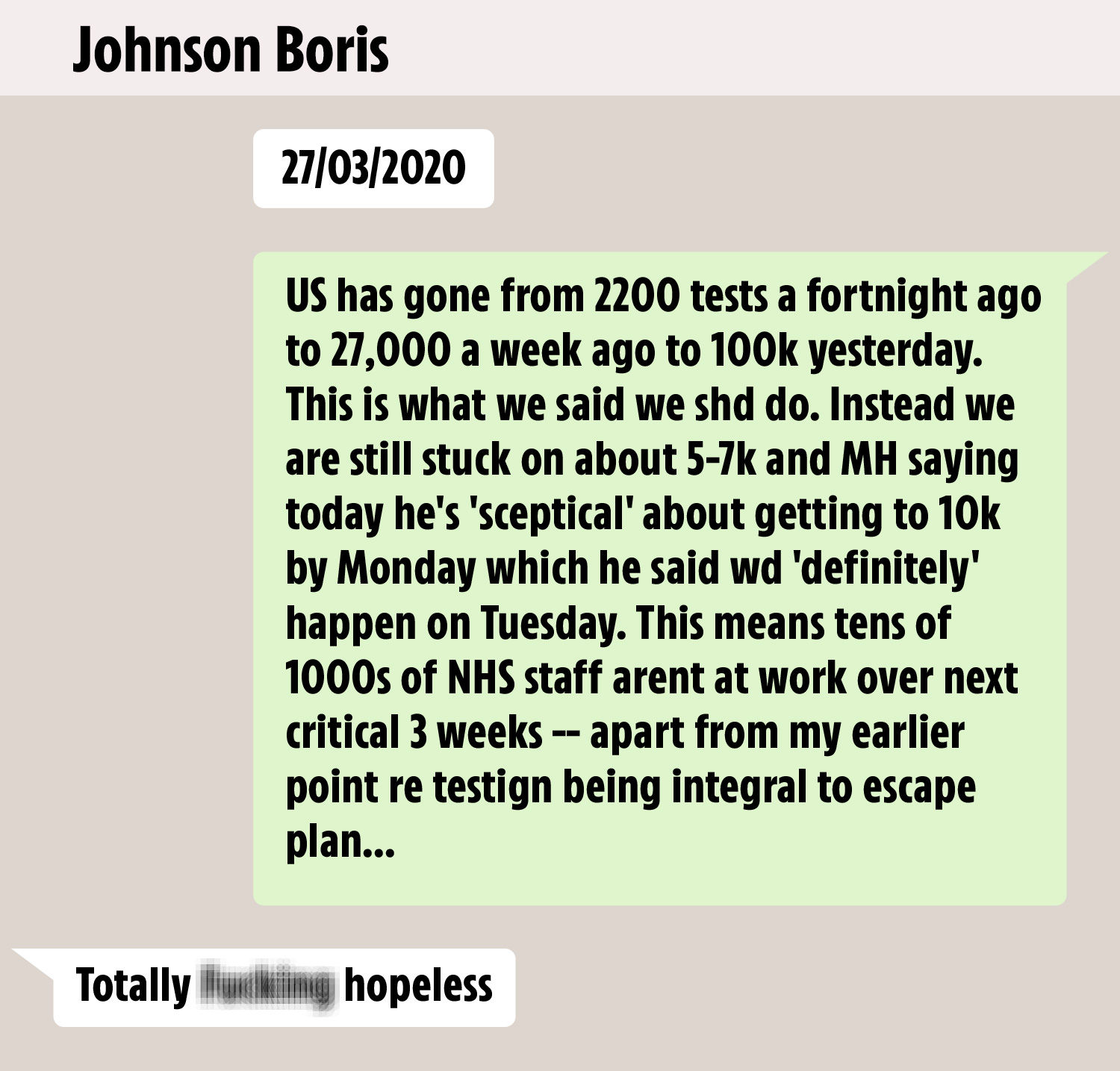 Mr Hancock broke cover as he drove to the Commons for a grilling about the Freedom Day delay – where Labour christened him "Hopeless Hancock".

He is fighting for his political career following a devastating Cummings blogpost stuffed screenshots of WhatsApps from the PM.

Mr Johnson later appeared to denounce efforts to procure PPE as a "disaster" and suggested Mr Hancock be stripped of responsibility.

Blaming the Health Secretary for botching the job, he added: "I can't think of anything except taking Hancock off and putting Gove on."

Boris was asked about the remarks at PMQs by the SNP's Ian Blackford, but dodged the question and did not respond.

In an excoriating blogpost Mr Cummings:

Mr Cummings ambushed the PM with the dynamite takedown just minutes before he got to his feet in the Commons for PMQs this afternoon.

This afternoon Downing Street refused to comment on the reports, and would only say: "We’re not going to get into engaging with individual allegations".

They refused to deny that the text messages were genuine, or that Mr Johnson was keen to replace Mr Hancock with Cabinet Office Minister Mr Gove. 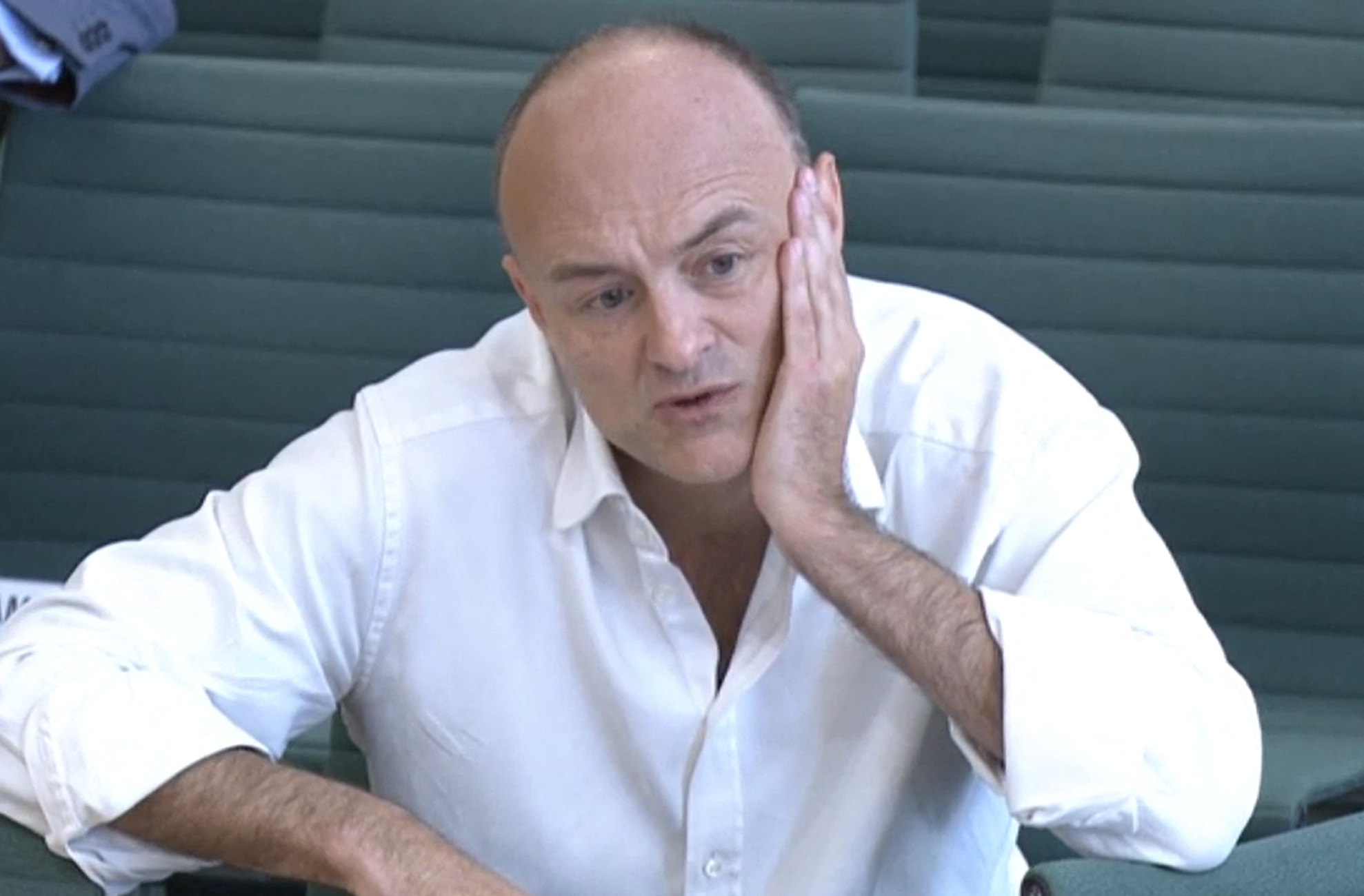 But they said the PM still has "full confidence" in the Health Sec, has "worked very closely" with him and “will continue to do so"

They added: "The PM has set out we’ll hold an official inquiry next year… our focus is on recovery from the pandemic.

"I don’t plan to get into the detail of what has been published."

Last month the former Downing Street adviser – who was ousted in December amid a power struggle – used a mammoth session with MPs to accuse Mr Hancock of bungling care home testing and brazenly lying to the PM during the height of the crisis.

He fumed that the bungling Health Sec should have been fired for "between 15 to 20 things" – but last month Downing Street and the PM stood by him.

Mr Hancock furiously denied the allegations and in his own evidence insisted he had the PM's full support and did all he could to save lives.

But today Mr Cummings put booster rockets under his attacks by using private conversations to attempt to back up some of his claims.

Health committee chair Jeremy Hunt today tweeted: "There was more melodrama than normal but it is not possible to stack up the most sensational revelations without evidence. 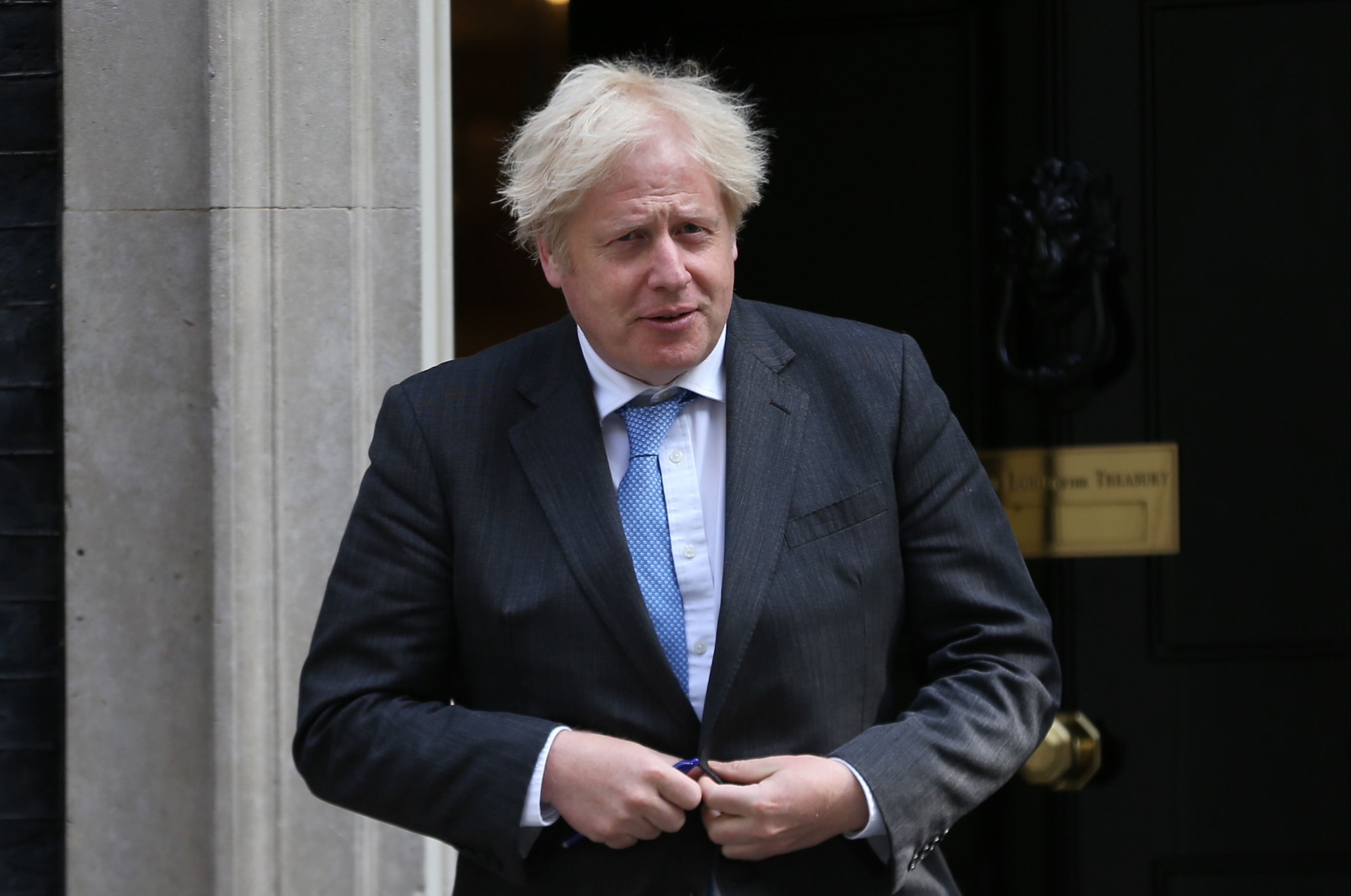 Mr Johnson appeared to lay blame for the shortage of ventilators at the feet of the Health Secretary.

Texts between him and Mr Cummings on March 27 last year fume against the lack of equipment, which ministers were scrambling to buy.

Mr Cummings said in a message to the PM: "They've totally f***ed up ventilators. I just heard officials admit we have been turning down ventilator offers because the price has been marked up."

The PM replied: "It’s Hancock. He has been hopeless."

Mr Cummings also recalled feeling utterly exasperated that officials decided to ship PPE rather than fly it in to save money – and said the lack of protective gear "killed" frontline staff in the first wave.

Mr Cummings doubled down his attacks on the Health Sec's handling of the testing rollout by accusing him of trying to soak up the credit for the 100,000 daily target.

He said Mr Hancock tried to rewrite history by pretending he had the “heroic” idea of ramping up testing to 100,000 a day.

He writes in his blog: "A public announcement was in principle definitely right but he did what he always did — he focused on the media and himself then lied.

"Testing, like vaccines, was removed from his control in May because of his incompetence and dishonesty March-April."

Mr Cummings claimed the PM would regularly "whinge" to him and others about Mr Hancock but would never confront the Health Sec directly.

PM 'WANTS OUT AFTER NEXT ELECTION'

Mr Cummings also turned his guns on his old boss, claiming he wants to delay the Covid inquiry until after he's left office.

Mr Johnson has announced a public inquiry into the Government's handling of the crisis will launch in April 2022 – but critics fear it will take years to report.

The former No10 aide said the PM has no intention of sticking around for it's publication.

He wrote: "It will not start for years and it is designed to punt the tricky parts until after this PM has gone — unlike other PMs, this one has a clear plan to leave at the latest a couple of years after the next election, he wants to make money and have fun not ‘go on and on’."

The Prime Minister's press secretary today hit back: "The PM has actually been asked this before and has said himself it's utter nonsense, so that still stands.

"As you know, the PM was elected in 2019 and continues to focus on delivering the manifesto we were elected on and leading the county out of the pandemic."

Taking a swipe at the PM, Mr Cummings said Foreign Secretary Dominic Raab was a more effective manager during the crisis.

As First Secretary of State, Mr Raab is the ranking Cabinet Minister and deputised when the PM was struck down with Covid.

Mr Cummings today sung his praises, saying meetings were "much more productive because unlike the PM Raab can chair meetings properly instead of telling rambling stories and jokes". 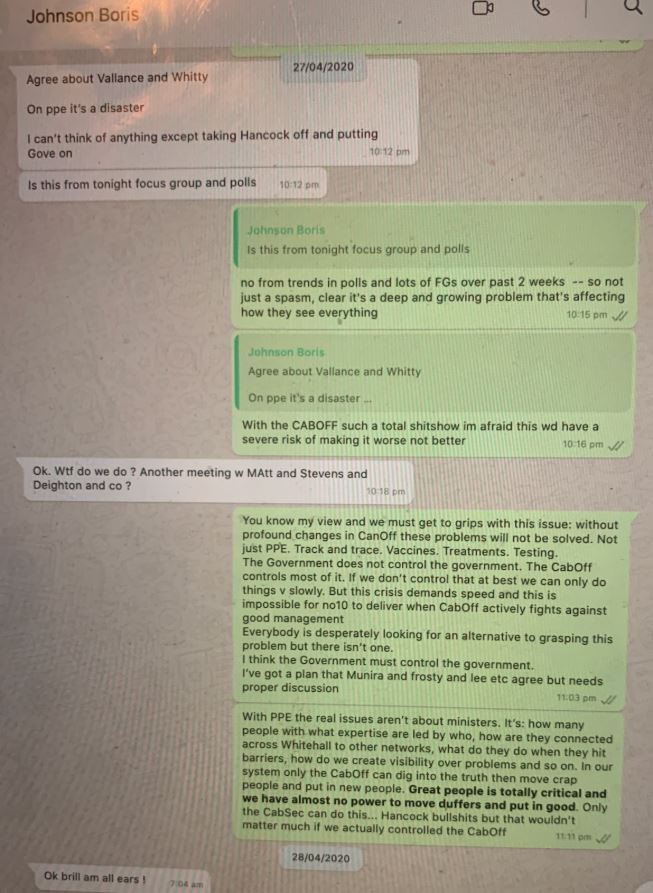 In the post Mr Cummings laid out questions he believed Mr Johnson should be asked about the Government's handling of the pandemic.

He wrote: "Given his failures on testing, care homes and PPE why did you keep in post a Secretary of State you described yourself as 'totally f**king hopeless' and how many more people died as a result of your failure to remove him?

"Why is No10 lying, including to Parliament, about the fact that the original plan was "herd immunity by September" and had to be abandoned?

"When did Patrick Vallance brief you on NHS data showing that the death rate at the first April peak was much higher than before/after the peak and do you now agree with Hancock that every patient got the treatment they needed?

"Do you now agree with Hancock that there was no shortage of PPE or do you agree with yourself in April 2020 that PPE supply was 'a disaster' that required moving Hancock?

"How many people died in care homes because of what you called the 'disaster' on PPE and what you called Hancock's 'totally f***ing hopeless' performance on testing in March?

"When will the SoS come to the House and correct his many false statements to MPs?"