DEMOCRATS have slammed Amy Coney Barrett on healthcare and said that Supreme Court hearing during the coronavirus pandemic is an "irresponsible botch." 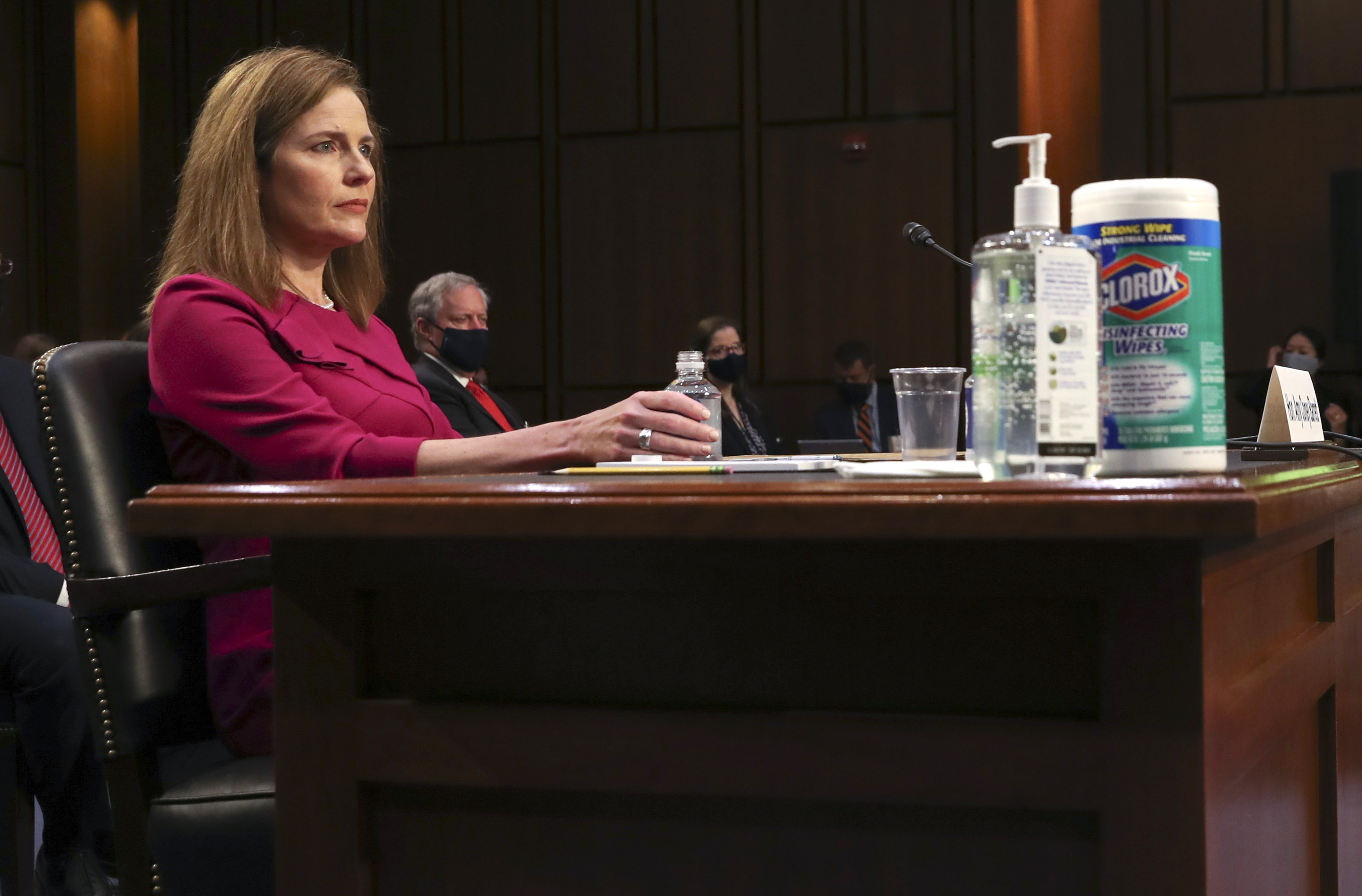 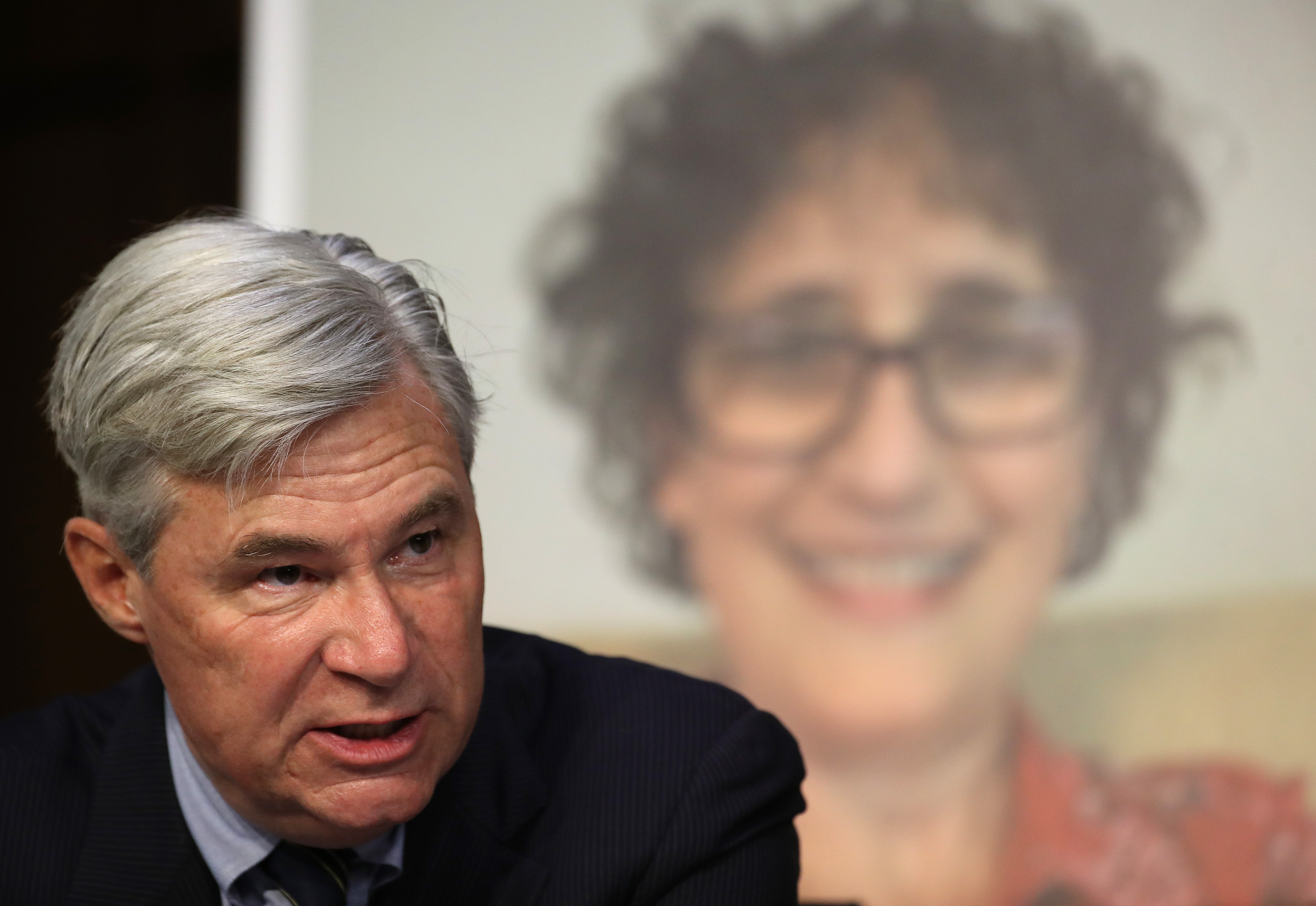 Barring a dramatic development, Republicans appear to have the votes to confirm Barrett to a lifetime seat on the Supreme Court.

If she is confirmed quickly she could be on the Supreme Court when it hears the latest challenge to the Affordable Care Act, a week after the election.

One after another, Democrats sought to tie her nomination to the upcoming court case.

“Health care coverage for millions of Americans is at stake with this nomination,” said Senator Dianne Feinstein of California, the committee’s senior Democrat.

Senator Sheldon Whitehouse said the nomination is a "judicial torpedo aimed" at the law's protection for people with pre-existing health conditions among its provisions.

The Trump administration wants the court to strike down the entire law popularly known as "Obamacare" on November 10. Barrett has criticized the court’s two earlier major rulings supporting the law.

Who is Amy Coney Barrett?

She is the eldest child of seven siblings. Her father worked as an attorney for Shell Oil Company.

She earned her undergraduate degree in English literature in 1994 at Rhodes College in Memphis, Tenn.

She taught at the University of Notre Dame in Indiana for 15 years, before being appointed to her current role as a circuit judge on the US Court of Appeals for the Seventh Circuit in 2017.

The couple live in South Bend with their seven children ranging in age from eight to 19.

Two were adopted from Haiti and one child has Down Syndrome and special needs.

She is also reportedly a member of People of Praise: a small, tightly knit Christian group which was founded in 1971 in South Bend, Indiana.

Members support each other through weekly meetings, religious teaching, Scripture readings, and prayer.

Controversially, the group is said to teach that husbands are the heads of their wives and should take authority over the family. 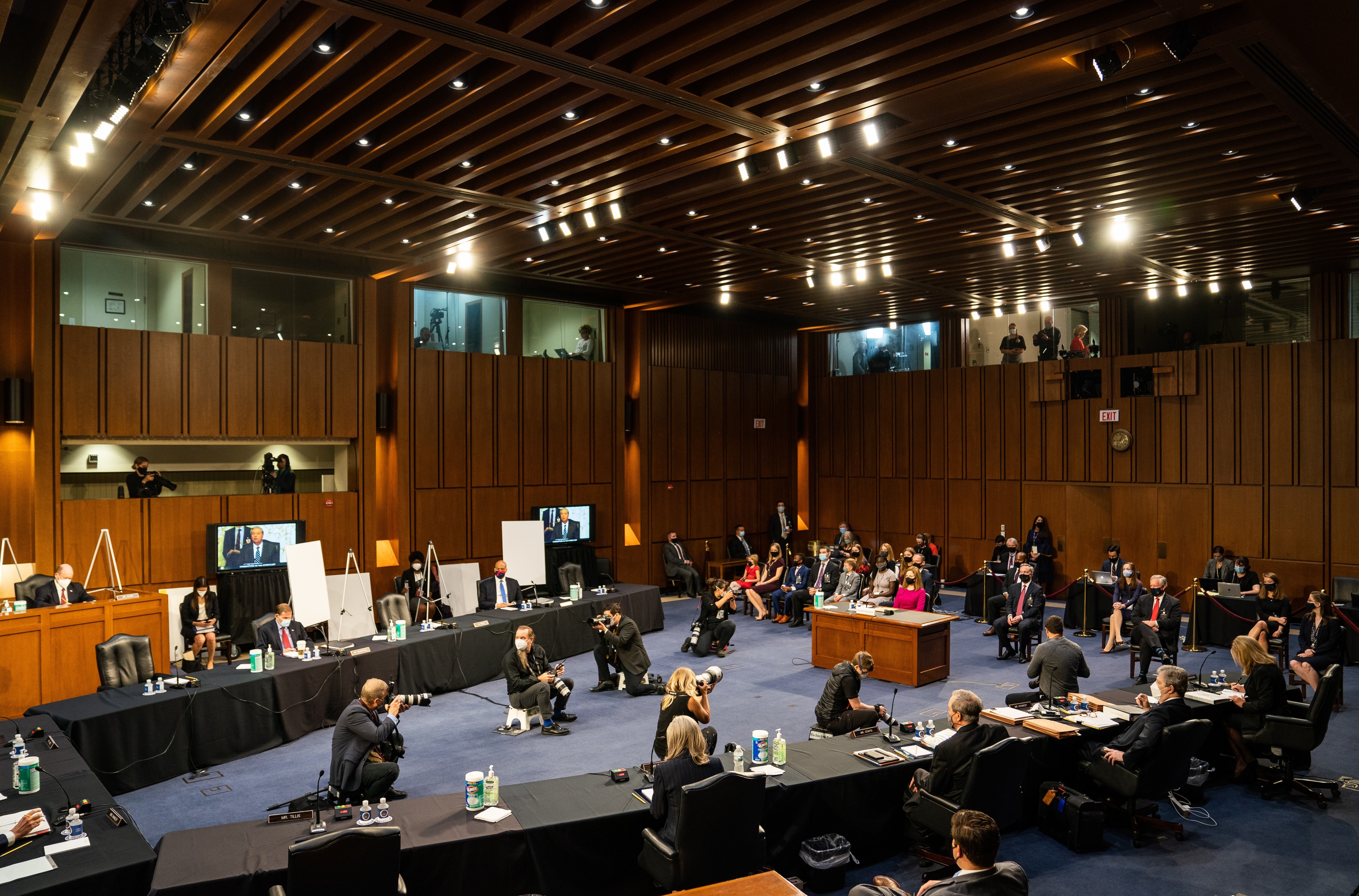 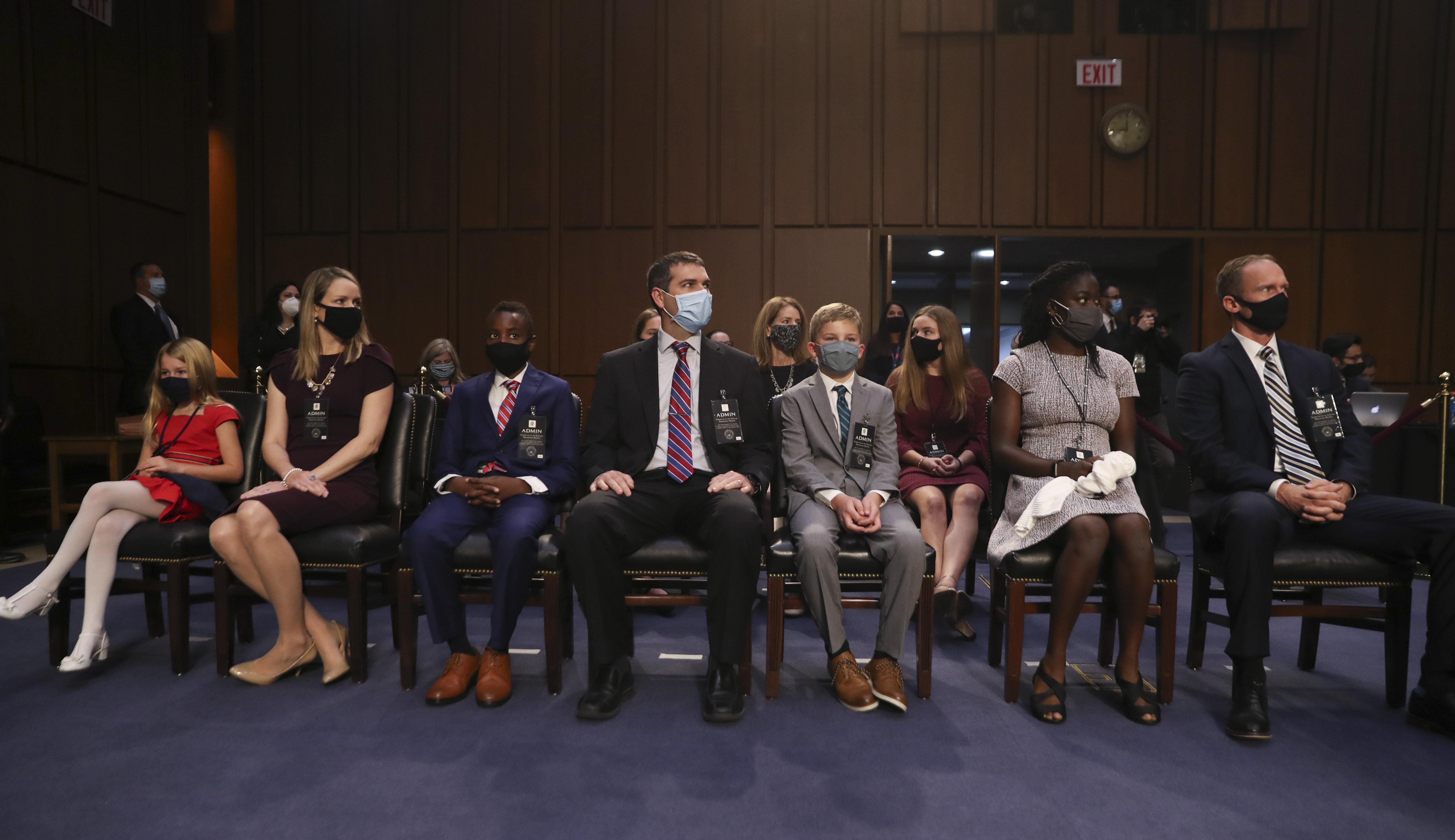 Whitehouse went on to slam Monday's meeting, saying: "This hearing itself is a microcosm of Trump's dangerous ineptitude in dealing with the Covid pandemic. Trump can't even keep the White House safe … The whole thing, just like Trump, is an irresponsible botch."

Republicans also warned against making Barrett's Catholicism an issue in the confirmation debate, especially in regard to her stance on abortion, with Senator Josh Hawley of Missouri lambasting what he called a "pattern and practice of religious bigotry" by Democrats.

However, Democratic senators made clear in advance of the hearing that they didn’t plan to question the judge on the specifics of her religious faith.

Democratic presidential nominee Joe Biden, also a practicing Catholic, told reporters ahead of a campaign trip to Ohio that he doesn’t think "there’s any question about her faith."

The Senate Judiciary Committee, meeting on a federal holiday, kicked off four days of statements and testimony in an environment that has been altered by the coronavirus pandemic.

Some senators were taking part remotely, and the hearing room itself was arranged with health concerns in mind. 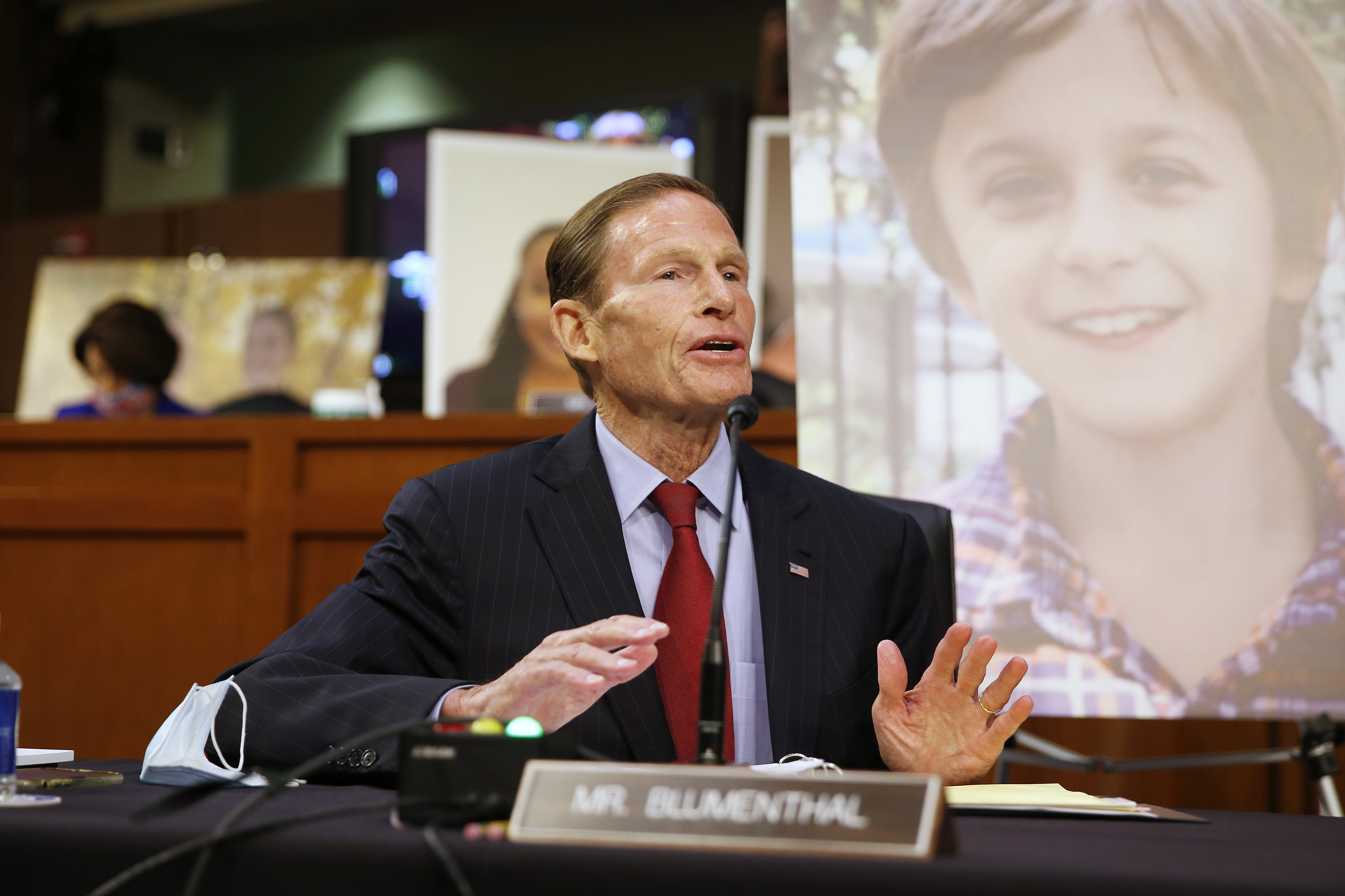 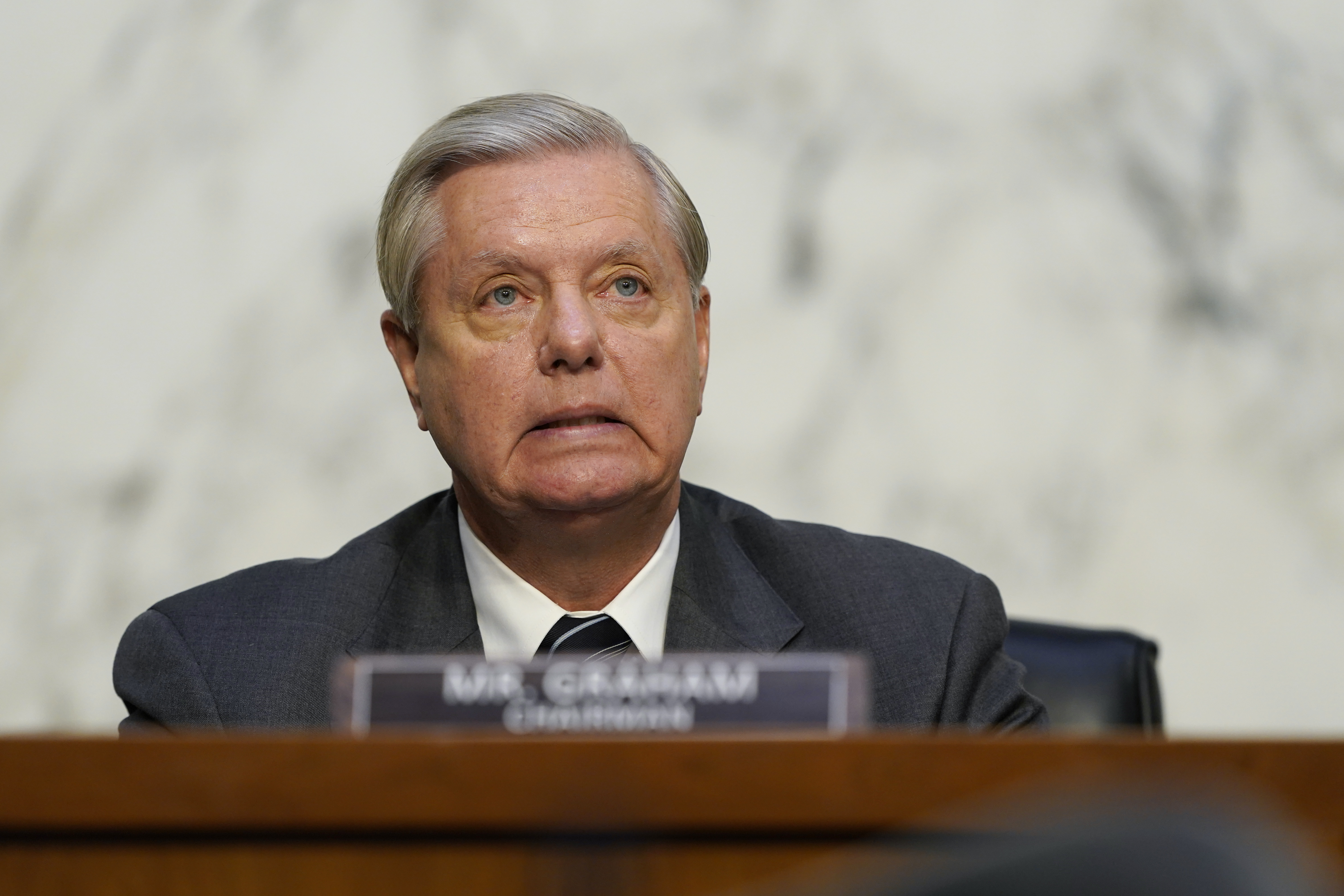 Senator Lindsey Graham, R-S.C., opened the hearing acknowledging "the Covid problem in America is real." But he said, "We do have a country that needs to move forward safely."

Graham acknowledged the obvious: "This is going to be a long, contentious week."

Barrett, a federal appeals court judge, was to tell senators that she is "forever grateful" for Ginsburg’s trailblazing path as a woman. But she is resolved to maintain the perspective of her own mentor, the late conservative Justice Antonin Scalia and "apply the law as written," according to her prepared opening remarks for the hearings.

"Courts are not designed to solve every problem or right every wrong in our public life," Barrett says in the remarks, which The Associated Press obtained.

Republicans are moving at a breakneck pace to seat Barrett before the November 3 election to secure Trump's pick, which would put her on the bench for any election-related challenges. 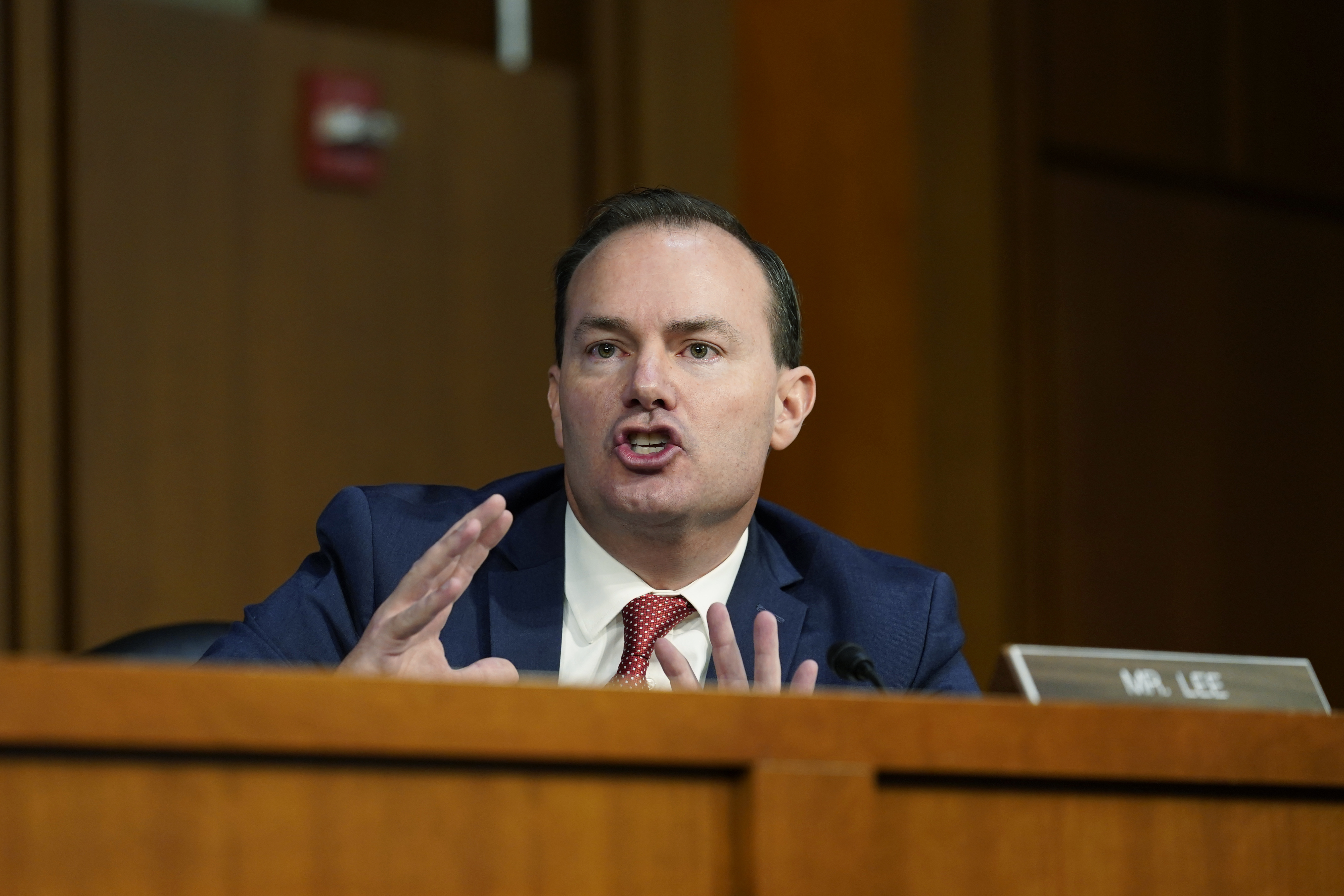 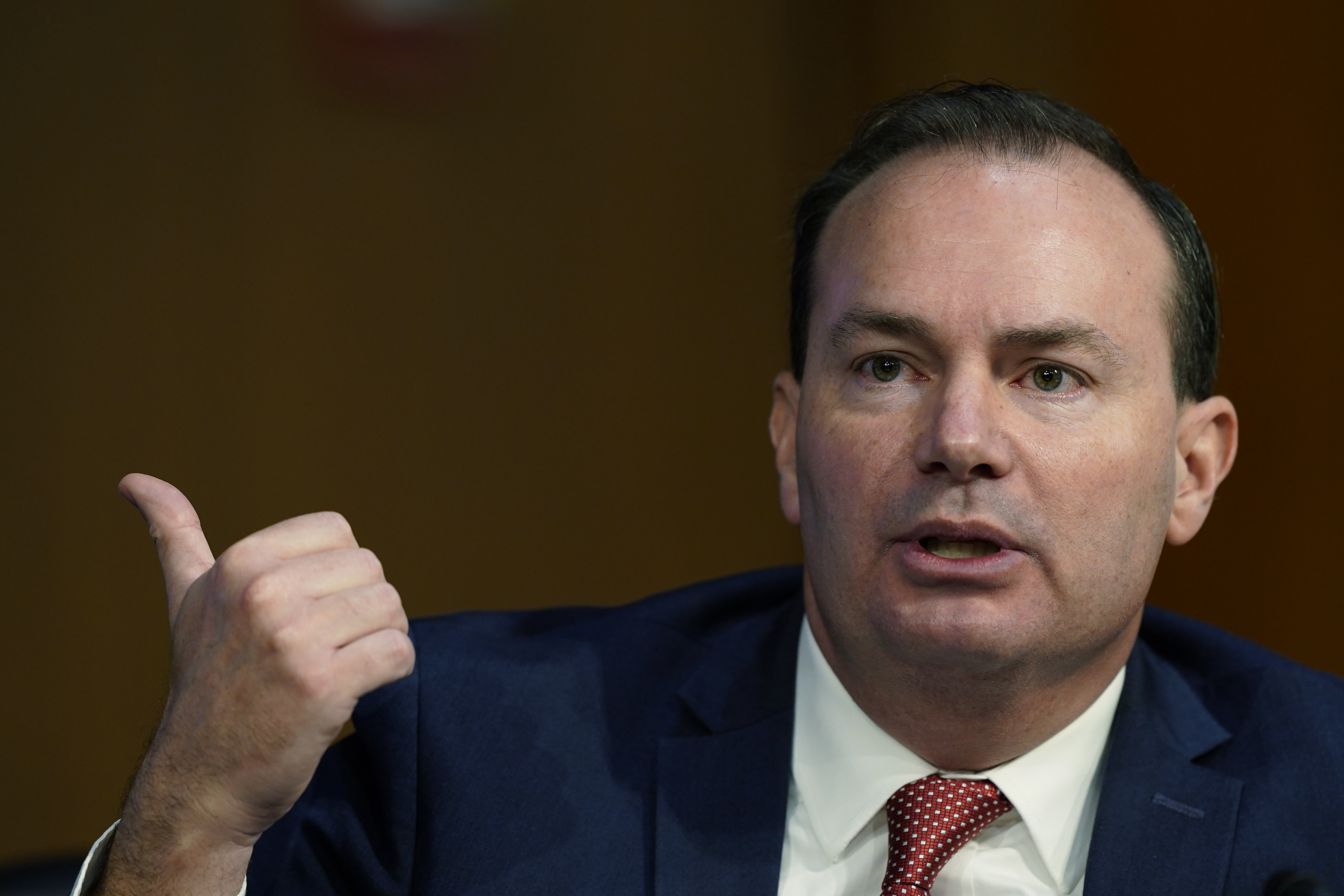 Democrats are trying in vain to delay the fast-track confirmation by raising fresh concerns about the safety of meeting during the pandemic after two GOP senators on the panel tested positive for the novel coronavirus.

Senator Mike Lee, one of those who tested positive, was in the hearing room Monday after his spokesman said he was symptom-free.

The other affected senator, Thom Tillis of North Carolina, was participating remotely, though he too is symptom-free, his spokesman said. Both tested positive 10 days ago.

Among senators who will not set foot in the hearing room because of coronavirus concerns is Democratic vice presidential nominee Kamala Harris.

"We are 22 days away from an election and people are voting right now. And that’s the focus given that they’re trying to push through, ram through a Supreme Court justice for a lifetime appointment while almost seven million people have already voted," Harris said as she arrived at her Senate office.

Trump chose Barrett after the death last month of Ginsburg, a liberal icon. It’s the opportunity to entrench a conservative majority on the court for years to come with his third justice.

Outside groups are pushing Democrats to make a strong case against what they call an illegitimate confirmation, when people are already voting in some states, saying the winner of the presidency should make the pick. No Supreme Court justice has ever been confirmed so close to a presidential contest. 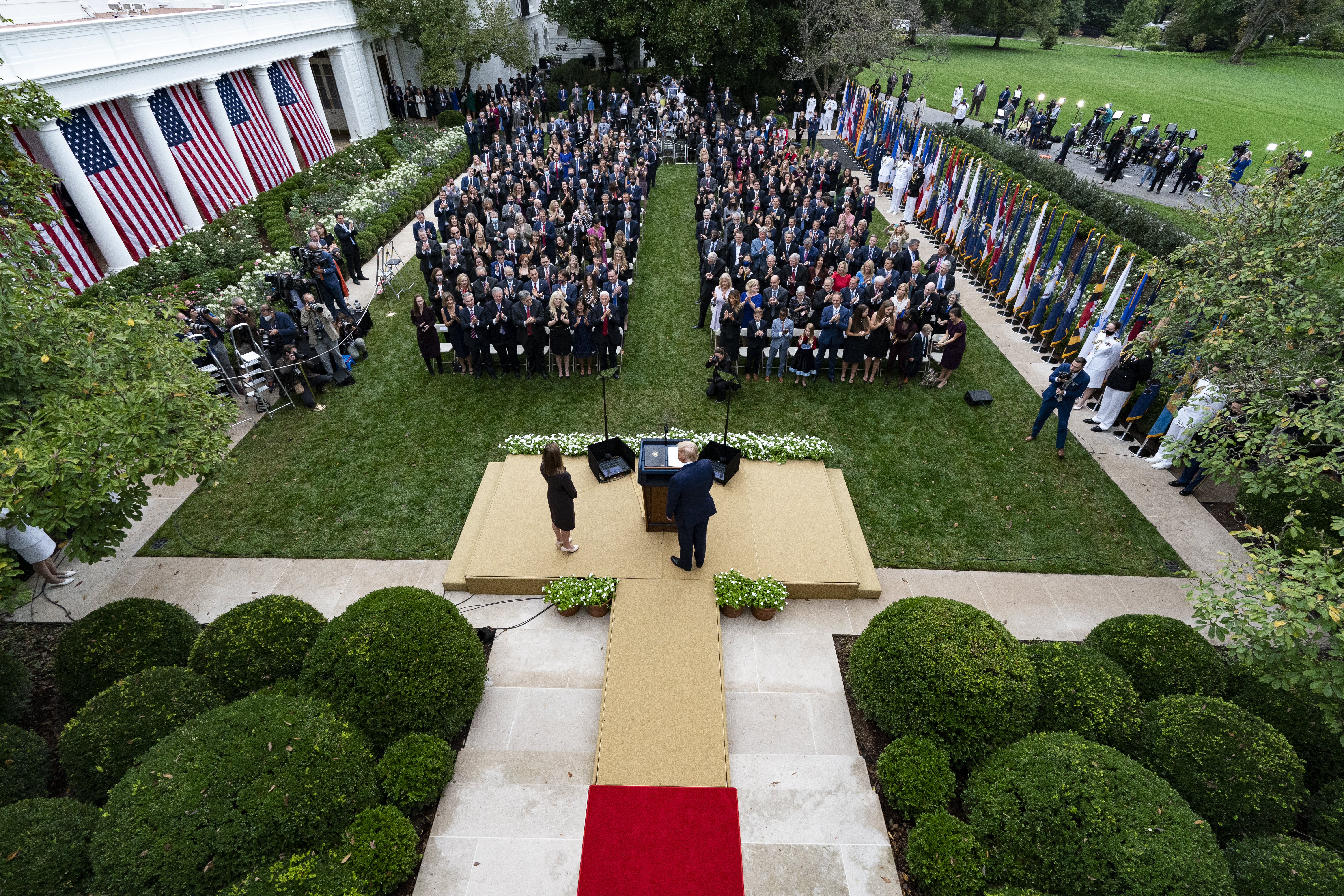 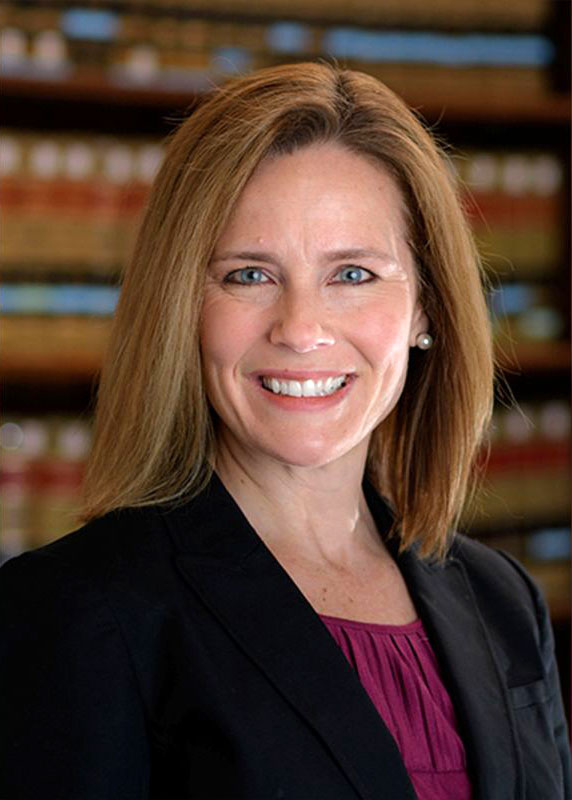 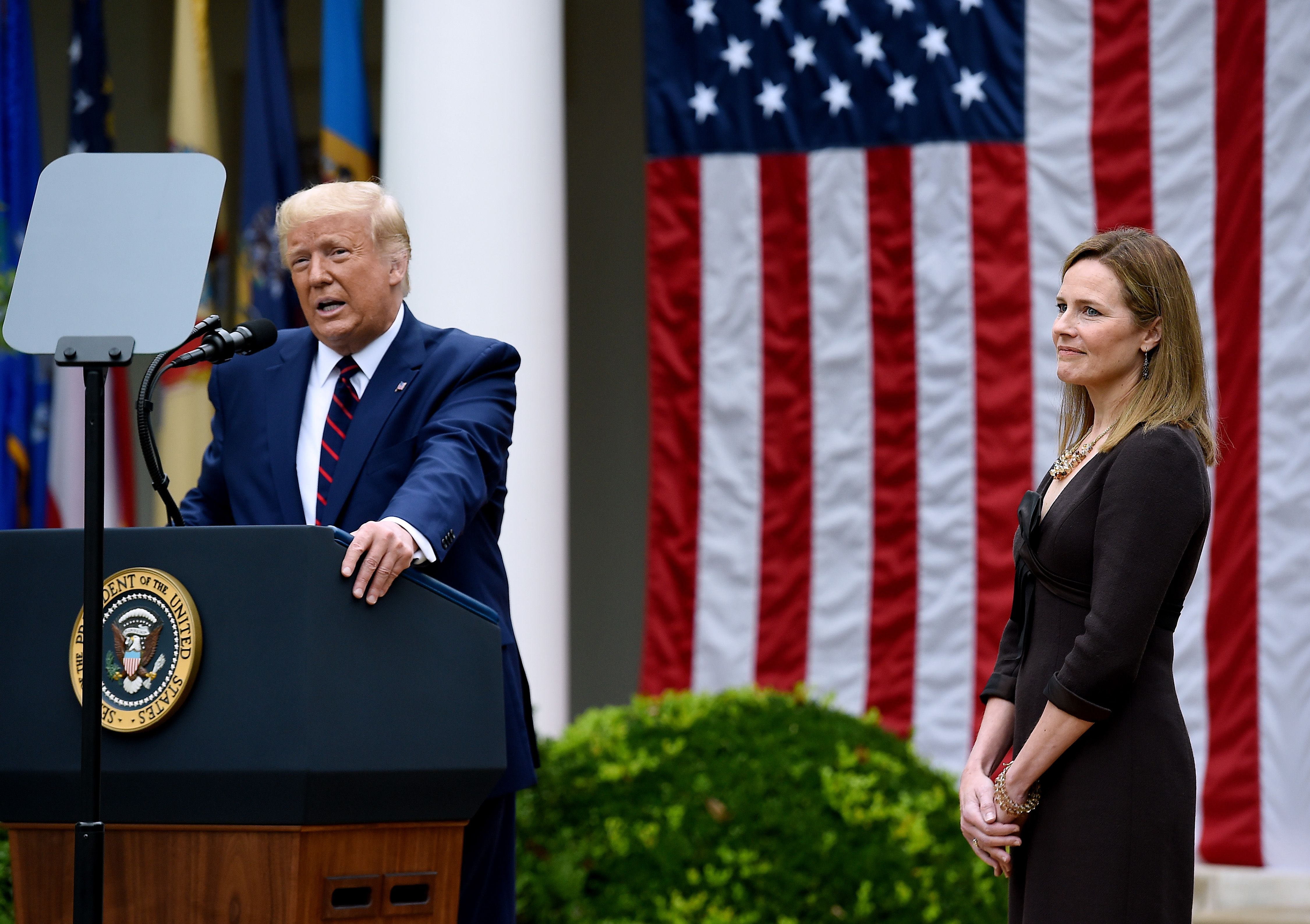 The country will get an extended look at Barrett over the next three days in hearings like none other during the heated election environment and the pandemic limiting public access.

Faith and family punctuate her testimony, and she said would bring "a few new perspectives" as the first mother of school-age children on the nine-member court.

Barrett says she uses her children as a test when deciding cases, asking herself how she would view the decision if one of her children were the party she was ruling against.

"Even though I would not like the result, would I understand that the decision was fairly reasoned and grounded in the law?" she says in the prepared remarks.

A Roman Catholic, she says she believes in the "power of prayer." Barrett's religious views and past leadership role in a Catholic faith community pose a challenge for Democrats as they try to probe her judicial approach to abortion, gay marriage and other social issues without veering into inappropriate questions of her faith.

Ordinarily, Barrett would get to show off her family and seven children. But the White House event announcing her nomination, in which most of the audience did not wear masks, has been labeled a "superspreader" for the coronavirus.

More than two dozen people linked to the September 26 Rose Garden event, including the two GOP senators, have contracted Covid-19 since then. Barrett and her family went maskless at the event.

She and her husband, Jesse, tested positive for the virus earlier this year and recovered, two administration officials have said.

Democrats already were enraged that Republicans are moving so quickly having refused to consider President Barack Obama nominee in February 2016, well before that year's election.

Barrett is the most openly anti-abortion Supreme Court nominee in decades and her vote could provide a majority to restrict if not overturn abortion rights.