Save articles for later

Add articles to your saved list and come back to them any time.

Washington: US doctors and nurses, in a letter published on Tuesday, urged the Trump administration to share critical COVID-19 data with President-elect Joe Biden's transition team to avoid unnecessary delays in tackling the pandemic as infections and hospitalisations skyrocket.

Members of several medical associations made the plea for cooperation a day after Biden warned that “more people may die” if outgoing President Donald Trump continues to block a smooth transition following his defeat in the November 3 presidential election. 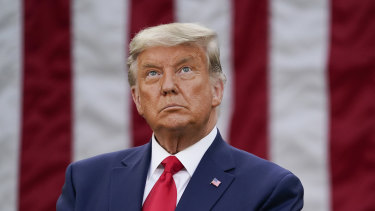 US Donald President Trump has made the transition for Joe Biden difficult.Credit:AP

Health officials have warned that the winter may usher in a new wave of COVID-19 deaths with community spread rampaging across the country and hospitalisations at record levels.

"Real-time data and information on the supply of therapeutics, testing supplies, personal protective equipment, ventilators, hospital bed capacity and workforce availability to plan for further deployment of the nation’s assets needs to be shared to save countless lives," said the letter, signed by the leadership of the American Medical Association, the American Nurses Association and the American Hospitals Association.

The soaring rate of new infections this fall, even in states that had managed to keep the virus at bay over the summer, has prompted health and government officials to sound the alarm.

Forty-one US states have reported record increases in COVID-19 cases in November, while 20 have seen a record rise in deaths and 26 reported record hospitalisations, according to a Reuters tally of public health data. Twenty-five states reported test positivity rates above 10 per cent for the week ending on Sunday, November 15. The World Health Organisation considers a positivity rate above 5 per cent to be concerning.

Several state governors and city officials have imposed new restrictions on indoor gatherings in recent days in an attempt to stem the spread of the disease, with the prospect of widely available vaccines still months away. At least 14 states have issued new public health mandates this month.

Several state officials also have urged citizens to exercise caution around the Thanksgiving holiday and not travel or socialise with extended family for the traditional indoor feast.

"I know this is difficult & frustrating, especially with the holidays right around the corner," Vermont Governor Phil Scott wrote on Twitter on Tuesday, referring to his ban on multihousehold gatherings. "But it’s necessary & we need your help to get this back under control."

New Orleans Mayor LaToya Cantrell was even more forward-looking in her holiday warnings, announcing on Tuesday that the city's Mardi Gras parades would be cancelled in February.

"Experts are predicting a 'winter spike' in cases this winter in December and January – right when our carnival calendars get rolling," Cantrell said on the city's website.

The number of coronavirus patients hospitalised in the United States hit a record of 73,140 on Monday and hospitalisations have increased over 46 per cent in past 14 days, according to a Reuters tally.

The Midwest remains the hardest-hit US region. It reported 444,677 cases in the week ending on Monday, November 16, 36 per cent more than the combined cases of the Northeast and West regions.

Iowa alone has registered more than new 52,000 infections over the past two weeks, about the same number reported from March to mid-August, with COVID-19 accounting for one in every four patients now hospitalised in the state.

“Now is the time to come together for the greater good to do everything we can for each other," Iowa Governor Kim Reynolds, a Republican, said on Tuesday, a day after announcing that all indoor gatherings in her state would be limited to 15 people and outdoor gatherings limited to 30, weddings and funerals included.