Donald Trump was sicker than acknowledged with coronavirus

Washington: US President Donald Trump was sicker with COVID-19 in October than publicly acknowledged at the time, with extremely depressed blood oxygen levels at one point and a lung problem associated with pneumonia caused by the coronavirus, according to four people familiar with his condition.

His prognosis became so worrisome before he was taken to Walter Reed National Military Medical Centre that officials believed he would need to be put on a ventilator, two of the people familiar with his condition said.

The people familiar with Trump’s health said he was found to have lung infiltrates, which occur when the lungs are inflamed and contain substances such as fluid or bacteria. Their presence, especially when a patient is exhibiting other symptoms, can be a sign of an acute case of the disease. 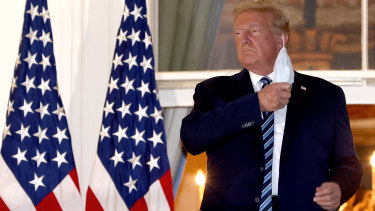 Donald Trump removes his mask at the White House after returning from hospital.Credit:Getty Images

They can be easily spotted on an X-ray or scan, when parts of the lungs appear opaque, or white.

It has been previously reported that Trump had trouble breathing and a fever on October 2, the day he was taken to the hospital, and the types of treatment he received indicated that his condition was serious.

But the new details about his condition and about the effort inside the White House to get him special access to an unapproved drug to fight the virus help to flesh out one of the most dire episodes of Trump’s presidency.

The new revelations about Trump’s struggle with the virus also underscore the limited and sometimes misleading nature of the information disclosed at the time about his condition.

The former president resisted being taken from the White House to Walter Reed, relenting when aides told him that he could walk out on his own, or risk waiting until the US Secret Service was forced to carry him out if he got sicker, two people familiar with the events said.

While Trump was hospitalised at Walter Reed, his medical team sought to downplay the severity of the situation, saying that he was on an upswing. At 74 and overweight, he was at risk for severe disease, and was prescribed an aggressive course of treatments.

He left the hospital after three days in which he at one point staged a brief ride in his armoured sport utility vehicle to wave at the crowd of supporters outside the building.

A person close to the former president denied that he had been seriously ill, echoing comments Trump himself made after he was sick.