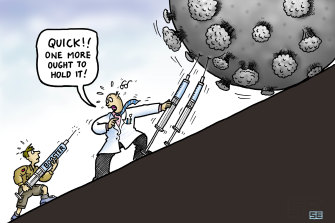 The Age is trialling new cartoonists for our Monday editorial cartoon. Today’s is by Stan Eales, a New Zealand-born cartoonist living in the UK and Poland.Credit:

To submit a letter to The Age, email [email protected] Please include your home address and telephone number.

Andrew Charlton (“Happy new year? It might well be on these figures”, Comment, 24/12) says “we’re finishing 2021 in surprisingly rude economic health”. “Rude” is appropriate when you consider those who are excluded from the bonanza.

If your “wealth” is not tied to the sharemarket but is made up of a meagerly indexed pension or allowance or interest-based savings, rising share prices bring no Christmas cheer. If you are desperately trying to break into the housing market then the price boom is sending your “wealth” backwards.

Wage growth is trending up typically only for the highly skilled and well organised union-wise, but at the lower end of the jobs market, they seem likely to stagnate in the absence of anything to force them up. Historic agricultural price rises are great for farmers but bad news for those already on tight food budget.

All this is not to begrudge those of us who can look forward to 2022 with economic optimism. But those who can’t deserve more consideration than being dismissed as “pockets of very real struggle and disadvantage”.
Bill King, Camberwell

We do want leadership
A brilliant article by Osman Faruqi (“Testing times after failure to invest”, Comment, 24/12). He managed to spell out the many frustrations experienced by Australians that should and could have been avoided.

Do our leaders ever think through their decisions and the consequences that may occur as a result of their lack of any true vision for the future? People may not want governments in their lives but they do want leadership and vision by governments in a time of crisis.
Marilyn Hoban, Mornington

I’m not sure who looks and sounds foolish, but I don’t think it is Anthony Albanese.
Ross Hudson, Mount Martha

A sad necessity
Marish Mackowiak wonders why Melbourne’s Jewish community centre needs security (“Treat everyone equally”, Letters, 24/12). Sadly, history has shown us the threats faced by Jews are vastly more serious than the prejudice confronted by Greek, Italian or Lebanese communities, contrary to what he implies.

As well as the numerous deadly attacks on Jewish facilities overseas, in Australia we have seen the 1982 bombing of the Hakoah Club and Israeli consulate on the same day in Sydney, a series of arson attacks against Sydney synagogues, an attempted firebomb attack on a Canberra Jewish centre full of people, three firebomb attacks on the house of a Sydney rabbi and many instances of anti-Semitic violence, not to mention many threats against Melbourne’s Jewish facilities.

Do we value drunk and sober driving equally? No, instead we act with authority in the interest of the general good.

Waiting for the case numbers of hospitalisations and death is like standing on the beach after the earthquake saying we’ll wait for the tsunami to hit.
Chris Hughes, Southbank

Questions to be answered
Tom Brennan, SC, acting for IT expert, Justin Warren, asks the right question pertaining to “how” and “why” the Department of Human Services rolled out the “robo-debt” IT system in the knowledge that it was flawed (“Fight for secret documents behind ‘robo-debt’ decision”, online, The Age, 23/12). Hitherto, an unresolved question that warrants full investigation because of the catastrophic impact on the most vulnerable people in our community.

Indeed, Mr Warren’s four-year freedom of information battle to ascertain the truth of “who approved the scheme, for what reasons, and what advice the government took, or didn’t take” must be answered in the public interest.

Because, contrary to the spurious assertion by government lawyer Andrew Berger, QC, that public servants would be “hamstrung” if their advice was publicly disseminated, full transparency and accountability in public administration are central to testing the “integrity” in government decision making or a lack thereof.

The class action settlement of $1.2 billion is a strong indicator of the latter.
John Fitzsimmons, Mornington

It’s not contagious
Can someone point out to the Prime Minister, when he starts using his “sunscreen and mandates” analogy, that skin cancer is not contagious, you don’t catch it from someone else, so his point fails at the first hurdle.

Looks like we’re going to need a bigger bunch of fact-checkers for the next election.
Ross Crawford, Frankston

The other Boxing Day test
Attendance at the Boxing Day Test will surely test the masking and distancing arrangements. It will be a miracle if COVID numbers do not surge.

We need to better consider our health workers, who are working under immense strain. Watching on the TV is a small sacrifice to make for the sake of these workers.
Doris LeRoy, Altona

Greens a relevant party
For years the Greens have been criticised for being a one-issue party. It was regularly claimed that change was only possible with the election of a “proper” political party.

As they have gradually developed detailed policies over a wide range of issues, the Greens have become a proper party – warts and all. This means voters may not like some of their policies, processes or politicians, but they can join the party and have their say.

I wonder how the “Voices of” and “Climate 200 fund” independents will form their policies, who will write them, how will they consult? It appears those who regularly criticised the Greens for lack of policies are prepared to accept candidates who make grand statement without policy detail.

As much as I have campaigned for action on the climate emergency, and as convincing as some of the “voices” may sound, I would like to see it happen within the party political framework, wherein those experienced with policy formulation and negotiation are based.

The Greens have kept that issue to the forefront for more than a decade, as well as being valuable chairs on a wide range of Senate committees. They are absolutely relevant.
Kerry Echberg, Princes Hill

Let’s see all the advice
I am looking forward to reading the advice Health Minister Martin Foley received from Chief Health Officer Brett Sutton in the latest chapter of the COVID pandemic (“Toughest mask rules as virus marches on”, The Age, 24/12).

Mr Foley said in making his decision he considered the economic, social and human rights impact of restrictions. So can we see that advice as well? He didn’t mention political advice. I am sure there was a lot to be considered on that front, so can we see that as well.
Pauline Ashton, Maribyrnong

Care and compassion
A big shout out to all the COVID testing station personnel spending their Christmas swabbing Victorians for a health reassurance or passport for intended travel.

We were at the Cranbourne hub and right up until the final staff member, we were treated with care, compassion and good humour.
Kay Frith, Gembrook

The pandemic
Up to 70,000 alongside each other at the MCG for most of the day, not required to wear masks, while those at a church service of about 100 people for less than an hour, being required to wear masks is not about medical advice (“Let’s see the advice”, Letters, 26/12), it’s about bread and circuses, and above all, it’s about the mighty dollar.
Susan Caughey, Glen Iris

Booster shots earlier and earlier. So 10 months ago it wasn’t a race but now with an election looming it is.
Bob Cornelis, Wonthaggi

Self-regulation – as modelled by some parliamentarians?
Jenny Smithers, Ashburton

As the Year of Zoom draws to an end and the PM’s popularity wanes, he resorts to facile TikTok messaging. How good is Chinese technology.
Greg Curtin, Blackburn South

Australians should have access to national cabinet meeting minutes – after all, we’re doing the hard work of the pandemic.
David Cayzer, Clifton Hill

TikTok was bad, now TikTok is good. You have to give it to the Prime Minister, he can do an about-face without even blinking an eye.
Michael Brinkman, Ventnor

I am longing for a hot cross bun. What do you reckon, a couple of weeks?
Chris Pollock, Donvale

When Nobel laureate Paul Samuelson was challenged for stating a different conclusion to his earlier findings, he said: “When my information changes, I alter my conclusions. What do you do, sir?” (Letters, 23/12.)
Rob Willis, Wheelers Hill

The Age’s editor, Gay Alcorn, writes an exclusive newsletter for subscribers on the week’s most important stories and issues. Sign up here to receive it every Friday.