Exclusive: A Biden vs. Trump rematch in 2024? Two-thirds of Americans say no thanks

How about a Joe Biden v. Donald Trump rematch in 2024?

While both men have indicated they plan to launch bids for second terms, voters are unenthusiastic about a replay of the 2020 contest. In a new USA TODAY/Suffolk University Poll, 65% of registered voters, including half of Democrats, don’t want President Biden to run for another term. And 68% of voters, including a third of Republicans, don’t want former President Trump to run again.

Among independent voters, the swing group in most elections, more than seven in 10 are opposed to each of them running.

“Honestly, anybody else,” said John Beltran, 36, of Pflugerville, Texas. The software developer, a Democrat, was among those called in the poll. “We know what we’re getting with Trump and Biden,” he said, saying he would like to have some other choices.

Exclusive poll: 100 days before the midterms, Americans aren’t happy about their options

Paleologos on the poll: Could a third-party candidate win the White House in 2024?

Americans express overwhelming dissatisfaction with both major parties and broad support for a third party, an idea that has proven difficult to execute in the past. The weariness and wariness toward both Biden and Trump, even among a fair share of those who voted for each two years ago, could create openings for potential challengers. 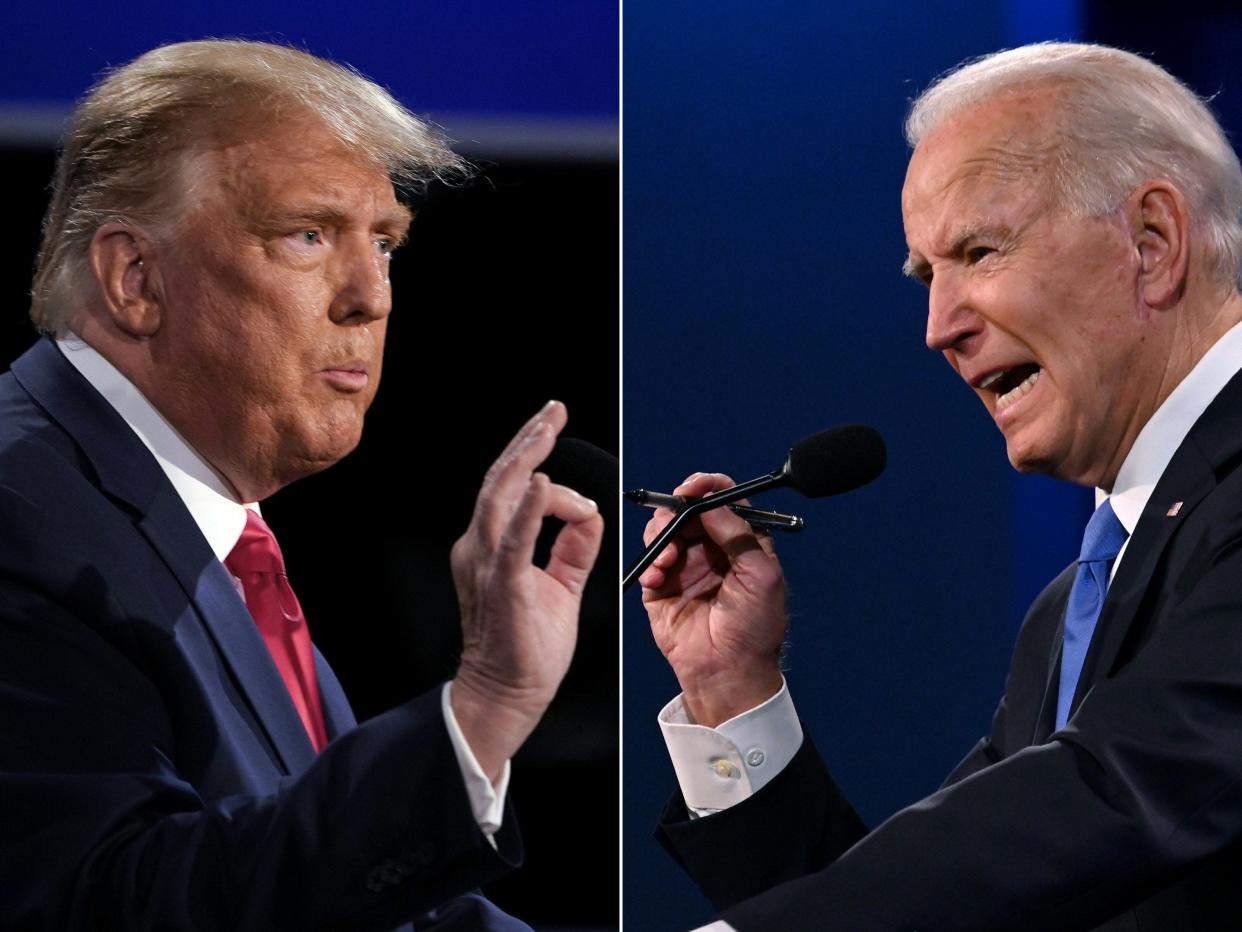 Horserace polls taken two years before a presidential election have a sorry record of predicting who will prevail to win the nomination and the White House. They typically measure name identification as much as political prospects.

What is striking, though, is the eagerness of most Americans to support candidates beyond those who are now are the faces of the Democratic and Republican parties. That sentiment might be a factor for Biden or Trump as they weigh whether to run, and it could affect the calculations of would-be challengers.

The survey of 1,000 registered voters, taken by landline and cell phone July 22-25, has a margin of error of plus or minus 3.1 percentage points.

In the Republican field, Florida Gov. Ron DeSantis is on Trump’s heels.

But when Republicans’ first and second choices for the nomination are combined, a way to measure the breadth of a candidate’s potential support, DeSantis narrowly leads Trump; 64% choose DeSantis as their first or second choice, compared to 57% who choose Trump. 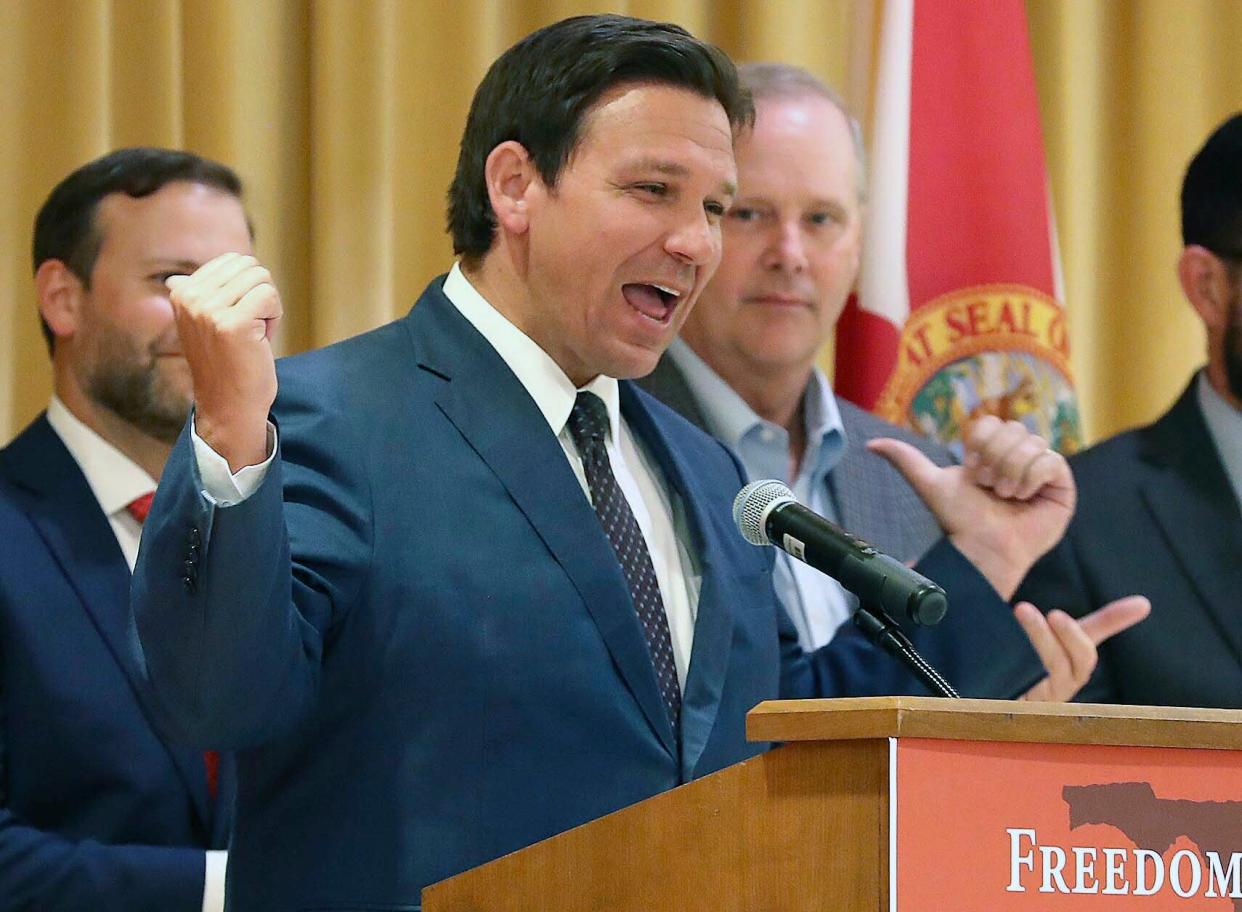 “With Donald Trump, there is no second choice to speak of – you’re either voting for him or you will never vote for him,” said David Paleologos, director of the Suffolk Political Research Center. “DeSantis, however, captures many more second choices, which means that if and when other Republican opponents eventually drop out, it would be DeSantis who benefits.”

To be sure, Trump retains the fervent backing of core voters. “He did a lot of things for us,” Danielle Cobb, 34, a real estate appraiser from Tucson, Arizona, said in a follow-up interview. “He lowered the prices. The market was great. The cost of living was great, like everybody was going in the right direction.”

But a majority of Republicans didn’t cite Trump as their choice for the nomination in 2024; 49% preferred another candidate and 8% were undecided.

“I think Biden has definitely shown that there’s probably a limit to the age of what a president should be … and you know, Trump isn’t any younger than that,” said Julie Clifford, 62, a retired engineer from Burleson, Texas. “So while I voted for Trump before, I wouldn’t go after him this time.” She’s interested in DeSantis.

Wyoming Rep. Liz Cheney finished fourth in the poll, albeit a distant fourth at 3%. She is Trump’s nemesis, booted out of the House GOP leadership and now co-chair of the House committee investigating the Jan. 6 assault on the Capitol. In two weeks, Cheney faces an uphill battle in the Wyoming primary to hold the GOP nomination for her House seat.

More: Liz Cheney is up for reelection in Wyoming. What to know about her August primary

Democratic contenders in a bunch 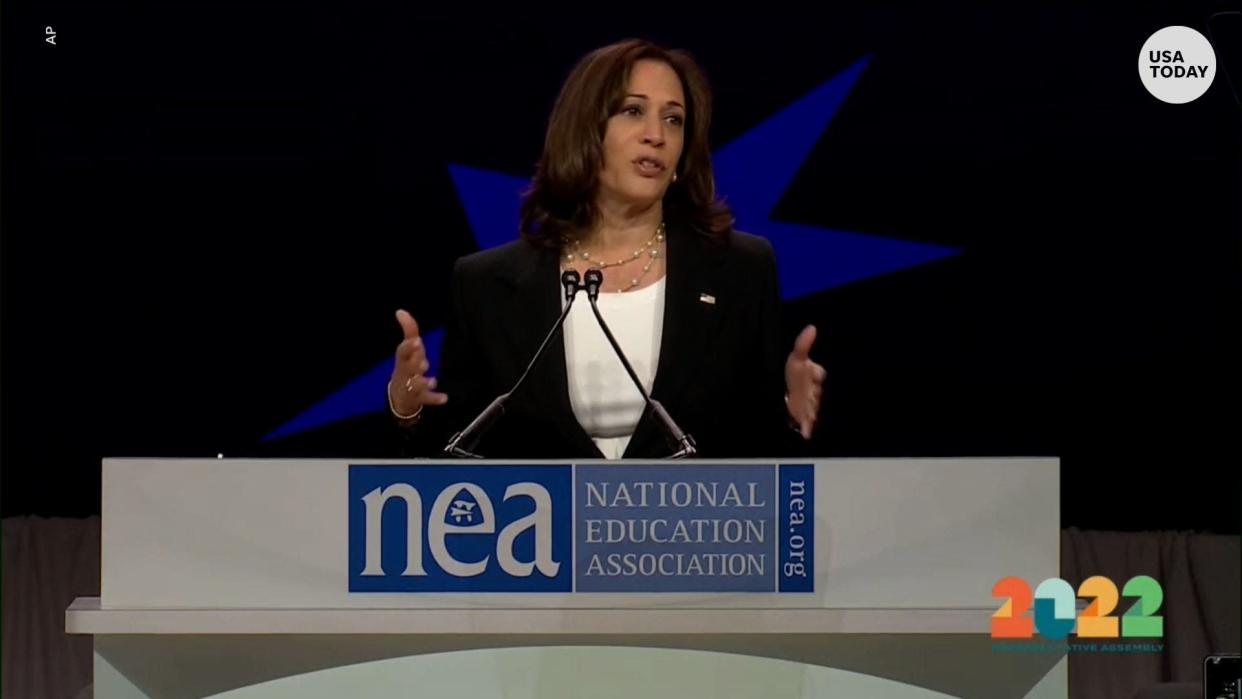 At the moment, there is no such clear shape to the Democratic field that might follow Biden. The USA TODAY/Suffolk poll listed seven possibilities. They all finished within 10 points of one another.

The findings show the potential tug-of-war ahead between the party’s most progressive voices – Sanders and Ocasio-Cortez, with support totaling 28% – and those more likely to talk about the need for outreach to moderates, including Buttigieg and Klobuchar, both from heartland states. Their support totaled 27%.

When the first and second choices of Democratic voters are combined, Harris is at 35%, Buttigieg and Sanders at 30%, Klobuchar and Ocasio-Cortez at 22%, Newsom at 18% and Clinton at 15%.

Joseph Simon, 60, a data analyst from Mountain View, California, said that if Biden and Trump face a rematch, Biden would have his vote. But his dream candidate is Klobuchar. “I think she’s a Democrat who listens to what used to be the mainstream Democrat working-class people,” he said. “She’s proven that she can appeal to moderate Republicans and independents.”

“I think he is doing a good job,” Simon said. “Given the circumstances, I think he’s doing a great job.”

But many Democrats acknowledged a thread of disappointment in Biden’s presidency, a feeling that he hasn’t been able to deliver as they had hoped.

“I like a lot of the promises Joe Biden made when he was running, but once he got into office, he didn’t really keep any of the promises that he’s made,” said Cherish Derrickson, 23, a law school student from Lexington, Kentucky. She mentioned proposals to forgive student loans. “That’s not entirely his fault, but he does have a Democratic Senate and a Democratic House, and nothing’s getting done.”

In 2020, Biden campaigned on his ability to unite the country and rebuild bipartisanship. By more than 3-1, 67%-21%, those surveyed say the country has gotten more divided during his tenure, not more united.

Biden would have slight lead over Trump in rematch

That lead of four percentage points for Biden echoes his 4.4-point defeat of Trump in the popular vote in the last election, 51.3%-46.9%. Then, less than 2% of the electorate supported other candidates.

Now, just one in four voters say the Democratic and Republican parties do a good job of representing Americans’ political views. Six in 10 say a third party or multiple parties are necessary. While efforts to establish a third party have faltered in the past, former presidential candidate Andrew Yang, a Democrat, and former New Jersey governor Christine Todd Whitman, a Republican, on Thursday launched a new centrist party called Forward.

In the USA TODAY poll, Larry Braslow, a computer technician and political independent, said he would like to see new faces. “None of the top political people right now are impressive,” he said. “I would love to see some new individuals, whether they’re current in politics or not, to get out and try to come up with some ideas, how they want to fix things or approach things.

This article originally appeared on USA TODAY: A Biden-Trump rematch in 2024? Most Americans oppose it, poll says