Epidemiologists say it is impossible to rule out the possibility that an infected person from NSW could slip undetected into Melbourne but argue that Victoria has never been better prepared to contain outbreaks or super-spreading events that may emerge after Christmas and New Year's Eve. 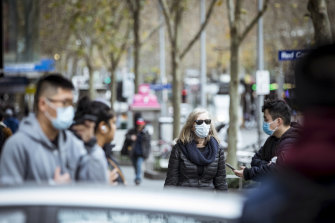 There are now more than 80 cases linked to the NSW cluster, which has prompted NSW Premier Gladys Berejiklian to lock down affected suburbs and restrict home gatherings in Greater Sydney to 10 people.

Burnet Institute epidemiologist Professor Mike Toole has called on NSW authorities to immediately extend the geographical boundaries of its short, sharp lock-down from the northern beaches to take in Greater Sydney.

"It would be erring on the safe side to extend the stage three restrictions from the northern beaches to Greater Sydney," Professor Toole said. "Waiting around to see what happens is very risky, because if there is a case, even one, there are probably more."

Professor Toole also questioned why NSW was yet to mandate face masks in high-risk indoor settings and continued to allow a 300-person cap on public indoor gatherings, when Victoria had zero community transmissions yet had enforced a 150-person limit.

"It's just asking for trouble," he said.

"It's as good as the AstraZeneca vaccine in terms of effectiveness and we are buying millions of doses of that," he said.

Deakin University's chair of epidemiology, Catherine Bennett, said people defined as close contacts of the growing cluster in the northern beaches had already arrived in Victoria.

"The real risk to Victorians is that there's people out there who may have been exposed to the virus that we don't know about yet," she said.

"So first and foremost, it's about encouraging all Victorians who have been in NSW to do the right thing and keep looking at exposure sites, because they are updating them all the time. This is critical because if someone's been at a site or they've been around anyone named as a close contact, then they should be getting tested, whether symptomatic or not."

Professor Bennett said the possibility of a super-spreading event leading to a widespread outbreak in Melbourne after Christmas was unlikely, but not impossible.

For a super-spreading event to a occur a number of factors must be at play, including poor ventilation, people shouting or singing, lack of physical distancing and a person with high viral load in close proximity to many others during their infectious period.

"Everything we have in place now just makes it harder for the virus to get a foothold," Professor Bennett said.

"What we have done in Victoria is modify our public situations to limit that opportunity for a super-spreader event, or should it happen, to contain it to something that's still manageable."

"Wearing a mask is a very good idea until we have more information in the next four or five days," he said.

While he felt a super-spreading event in Melbourne over the festive season was unlikely and that any such event would be unlikely to get out of control, he said NSW and the rest of Australia must seriously consider limiting numbers on public indoor gatherings over the Christmas and New Year period.

"I think we are going to see a smattering of cases out to 10 days from now in NSW because if we were going to see a widespread, uncontrolled spread or spread among unknown sources, we probably would have seen a few more cases of that by now," he said.

University of Melbourne epidemiologist John Mathews said while "you can never rule out the fact that the virus is still circulating in people in Victoria who aren't being diagnosed", Victoria's limit on gatherings, increased sewage testing and bolstered contact-tracing capabilities meant it was in a better position than ever before to swiftly contain any outbreak.

University of Sydney infectious diseases expert Professor Robert Booy said the cluster in NSW would continue to be "major worry" until there was confirmation the edges of the outbreak had been contained.

"The trouble is we are dealing with a virus that spreads amazingly easily," he said. "If only one or two viruses slip through, if we have only one or two chains of transmission, that can be enough for one to become five and five to become to 15 and that can happen in less than a week."

Professor Booy said while a vaccine was not a silver bullet it would go a long way towards protecting Australians.

"If we just maintain our discipline for another two to three months, we can start seeing the other side of this as large numbers of people get vaccinated," her said.

"We've not got a forever horizon any more, but a horizon that is quite close because within months we will have lots of people vaccinated and a much greater restraint on the virus's transmission."