DUMB-BLE Dryer: Moment firefighters rescue student stuck in university halls clothes spinner after a few tequilas convinced her she could fit inside

This is the hilarious moment a student was rescued by firefighters after she got stuck inside her tumble dryer.

Rosie Cole, 21, had a few glasses to drink with her housemates when she was dared to get inside the dryer in their shared accommodation.

She’d been enjoying Zinfandel wine and honey tequila when their Tuesday evening took a sudden turn.

The drunken student thought there was ‘no chance’ she’d fit, but after wriggling her way in she was suddenly stuck inside the dryer.

Emergency services were called to the bizarre and hilarious scene around 11pm as Rose said they ‘save cats from trees’ so maybe they would ‘save students from tumble dryers’.

The commotion lasted roughly 20 minutes in total, and it took three firefighters to successfully rescue the befuddled student. 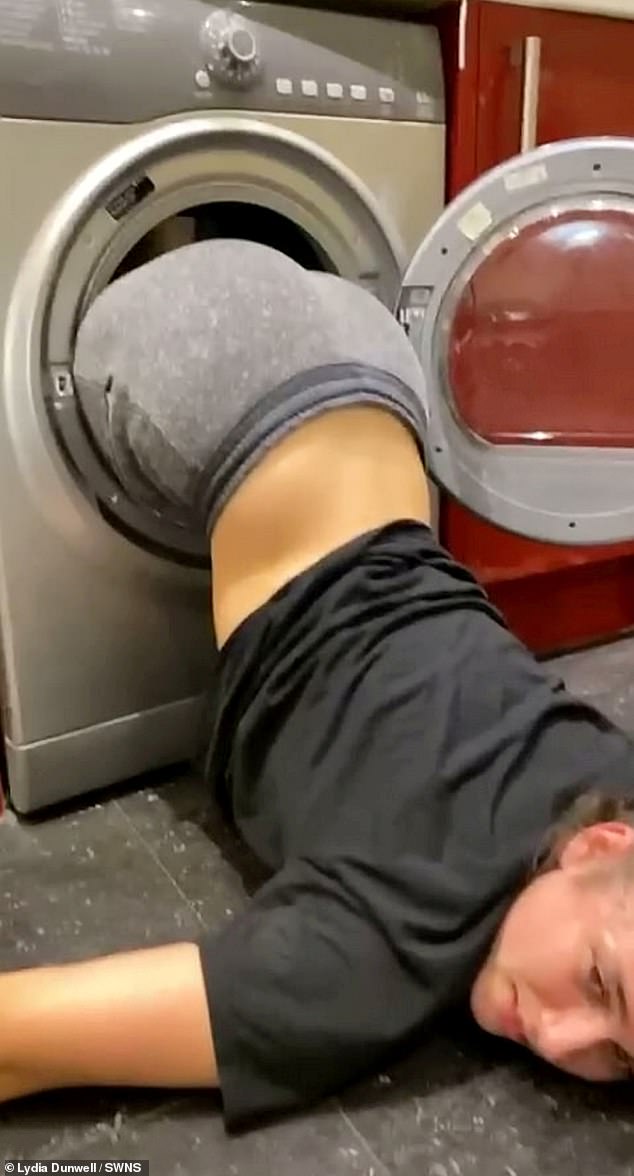 Rosie Cole, 21, had a few glasses to drink with her housemates when she was dared to get inside the dryer in their shared accommodation

Rosie, from Hull, East Yorkshire, said: ‘I was with my other housemates, and one of them dared me to get in it.

‘Me thinking there was no chance I’d actually fit, decided to try it and to my surprise it seemed easier than I thought.

‘It wasn’t until I wiggled both my hips in and got my legs crossed behind me that I realised I couldn’t get out.

‘I am a bit dramatic so I didn’t think it was that bad at first, and my house mates were making me laugh, but when I realised that I couldn’t uncross my legs and my hips were stuck I got a bit worried.

‘Especially when I tried to free myself the dryer tipped forward and I couldn’t get myself out.

‘My arms were starting to hurt trying to hold myself up, and it was pretty hot inside the dryer.

‘My housemates tried pulling me out, but they couldn’t, so we didn’t know what else to do other than to call the fire service.

‘They save cats from trees so maybe they could save students from tumble dryers.’

Rosie said the house of six people were given a fire safety brief – but she admitted she’d never done her own washing.

She said: ‘They were lovely and they just laughed at me. When they were leaving they opened the washing machine and asked if anyone else needed saving.

‘They gave us a fire safety brief and asked if we knew what to do if there was a fire.

‘I remember learning stop drop and roll but I don’t know how relevant that is when you’re inside a dryer. 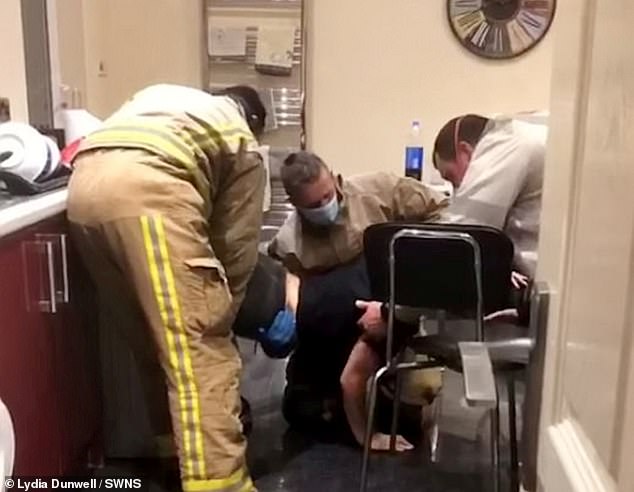 ‘I’ve never tried it before, and I can definitely say I won’t be tying it ever again! It was definitely not one of my finest moments, I will be leaving this one out of the CV.

‘I’m not going to lie, I never do my own washing anyway, I’ve never even used the dryer, but maybe I should start putting my clothes in it when they’re not on my body.’

Her housemate Lydia Dunwell, 21, was woken up to the sound of sirens blaring when she sprinted downstairs thinking the house was on fire.

She said she was left ‘shocked’ and ‘speechless’ when she found it was just Rose who’d gotten stuck inside the dryer.

The psychology major immediately took to filming the hilarious scenes.

She said: ‘I was up for about 20 minutes as I felt a bit ill and wanted to sleep but I woke up to blaring sirens and thought our house was on fire.

‘I sprinted downstairs in my pyjamas and then I saw her – she was just stuck in the dryer. I couldn’t believe what I was seeing – it was so ridiculous. 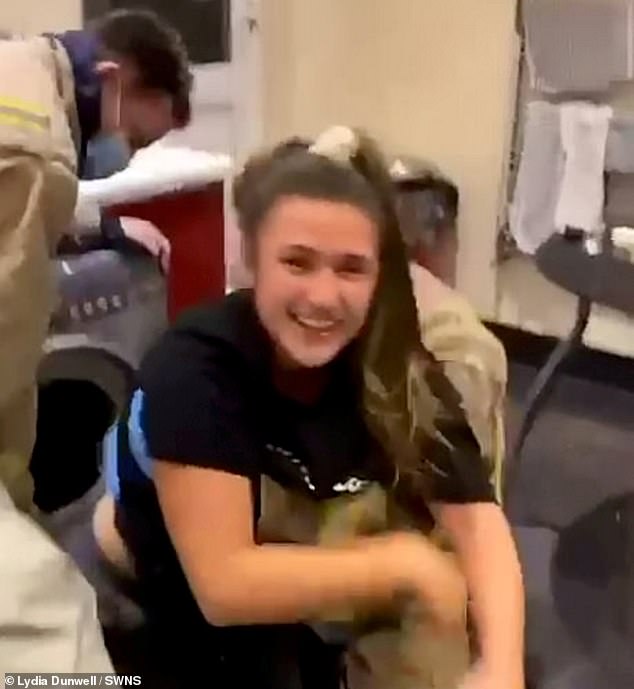 Rosie’s housemate Lydia said when they rang emergency services and told them someone was stuck in a dryer, the phone operator assumed it was a small child. She said: ‘They had to tell her it was a grown 21-year-old woman’

‘It took three firefighters to get her out and they had to unblock the entire street.

‘It was just a random Tuesday night, we thought we might as well have a few drinks. Never thought it would lead to her getting stuck in a dryer but here we are.

She said that when her housemates rang emergency services and told them someone was stuck in a dryer, the phone operator assumed it was a small child.

Lydia, from Pontefract, near Leeds, West Yorkshire, said: ‘When they rang emergency services and told them someone got stuck in a dryer the person on the phone asked how old they were.

‘It was so embarrassing – they had to tell her it was a grown 21-year-old woman. I was just in stitches.

‘It all unfolded in about 20 minutes, but it’ll be a lifetime of embarrassment I think.

‘I will never stop making fun of her. It’s been the highlight of the year so far.’