Fla. Woman Reunites with Dad Who Disappeared in Hurricane Ian Flood Waters and Clung to Tree for 3 Hours 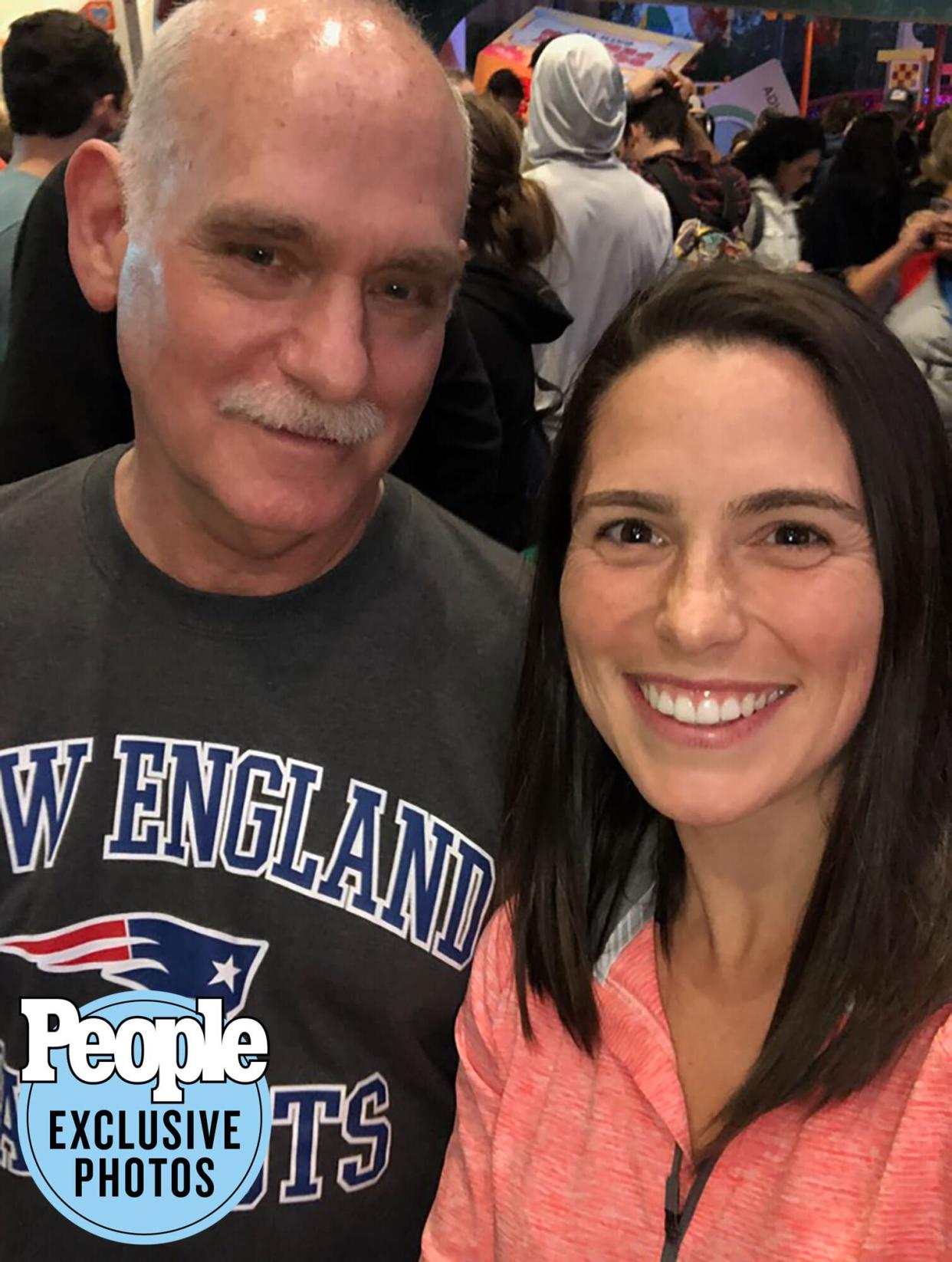 As flood water from Hurricane Ian rose in her Rotonda West, Florida, home around 2 p.m. Wednesday, Stephanie Downing got a text message from her father, Stan Pentz, who was over an hour away at his home in Fort Myers. He said the water was up to his shoulders, and he couldn’t get out.

Standing on her kitchen table, Downing called him on the phone and screamed, telling him to break a window or do anything to get out and swim to safety. Then the call dropped. Every time she called back, it went to voicemail. Then she lost all cell service.

“The last thing I heard my dad say was, ‘I think I’m going to drown,'” Downing, a 32-year-old physical therapist, tells PEOPLE.

As she feared for the worst, her neighbors told her they’d heard the death toll in badly hit Fort Myers was growing.

“I just looked at my husband and said, ‘I think my dad is one of those people who are dead,'” Downing recalls. “When I saw my sister, we didn’t even say words to each other. We just held each other and cried, because we thought our dad was gone.”

She faced that potential reality for the next 20 hours until she finally gained access to internet around 10:45 a.m. Thursday. A text message from a stranger was waiting for her: “I’m here with your dad.”

“My sister fell to the ground crying,” says Downing. “I just fell into a chair with my head in my hands, saying, ‘Oh my God, he’s alive.'”

Pentz, a 69-year-old retired chef who lives in a one-story condo building in the Iona neighborhood of Lee County, was constantly in contact with his daughter as the hurricane approached. At first he put down towels when the water started seeping into his home. But then the water smashed through his sliding glass doors. Within one hour, it rose 6 ft. inside his home. The water was rushing at him from both sides, and he couldn’t get out of the house, he told his daughter over text message. Downing called him. 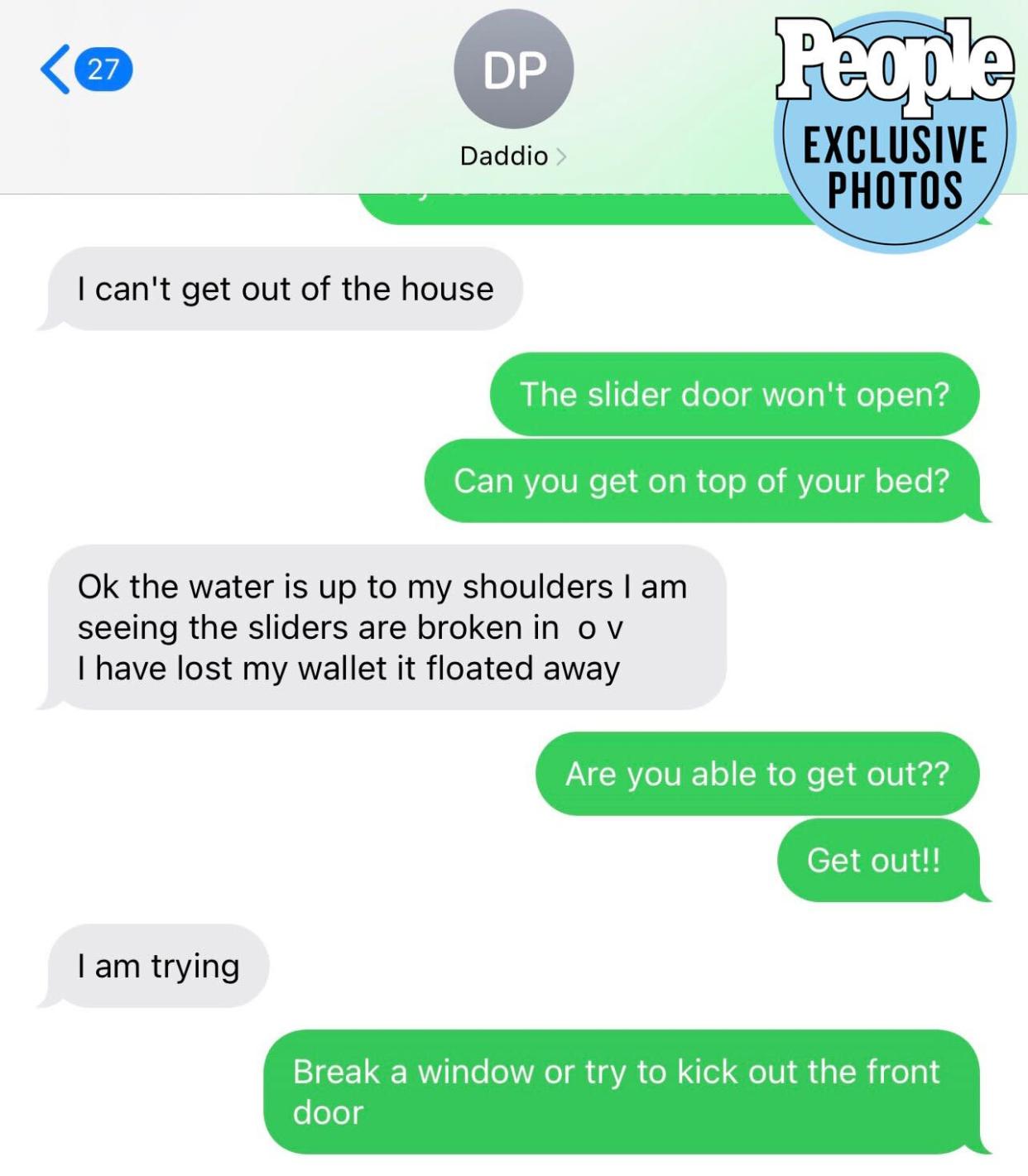 RELATED: 21-Year-Old Relives Hurricane Ian Pushing Her Grandpa’s Home ‘Towards Us’ in Flood: ‘I Lost Everything’

“I’m standing on my kitchen table screaming,” she remembers. “My husband’s screaming in the back, ‘Grab your meat mallet and smash open a window.’ And then the line went dead.”

As Downing feared for the worst, Pentz jumped into action: he clung to the tops of his window blinds, dove through an opening and swam over his car in the direction of the two-story building next door.

Pentz swallowed water. “He thought, ‘Okay, this is it. I am going to drown,'” Downing says.

He couldn’t fight the current, so he let it take him. Then the water slammed him into a palm tree, where Pentz — who recently had a hip replacement — clung for his life for three hours.

“He hooked his arms and his legs around the tree branches and just held on,” Downing says.

As the sun began to set, Pentz was able to put his feet on the ground. He waded to a nearby house and huddled between the screen and the front door.

At dawn, he waded though knee-deep water. Next, the barefoot man walked a few miles to the Publix grocery store where he works part time. A stranger there helped him get word to his daughter.

Within hours, Downing’s sister was able to pick up her dad and take him to their mother’s house.

“I walked in and my stepdad told my kids, ‘Someone special is here,'” Downing says. “I saw my dad sitting in a chair and I’m just like, ‘Oh my God!'”

“I put my head on his chest,” she continues. “I looked at him and said, ‘Hey Michael Phelps. You did some swimming, huh?’ I said, ‘I feel like I’m looking at a ghost.’ And he was like, ‘I feel like I should be dead.'”

Pentz’s condo is unrecognizable, his beloved record collection is smashed and his golf clubs are gone, but they’re keeping it all in perspective.

RELATED: Hurricane Ian: How to Help with Disaster Relief Efforts

“He is truly a survivor, and I am just so grateful,” she posted on Facebook.

“We’re just staying positive and knowing that people, not property, is what matters,” says Downing, who is staying at a St. Petersburg hotel with her dad and helping him with calls to FEMA, the Red Cross and his insurance company. She also launched a GoFundMe campaign after people asked how they can help her dad get back on his feet.

“We hadn’t even met some of our neighbors before, but now we’re like best friends,” she adds. “We’re like, ‘What do you need? Do you need us? Where’s my chainsaw? Let me chainsaw my tree off your house.'”

“Our community is really strong,” she continues. “That’s what gives me hope.” 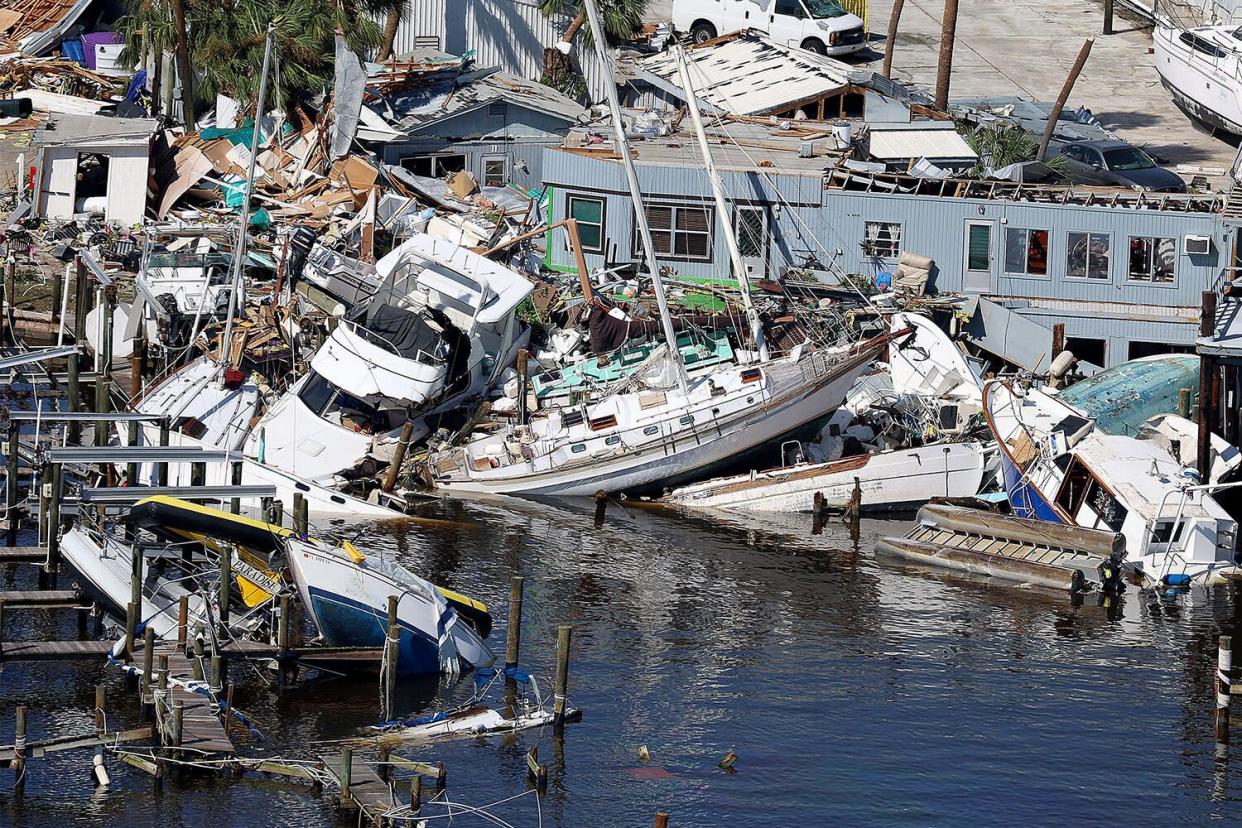 Hurricane Ian made landfall as an “extremely dangerous” Category 4 storm with sustained winds of 150 mph on Wednesday just after 3 p.m. local time, near Cayo Costa, Fla., according to the National Hurricane Center.

By Thursday morning, more than 2.5 million people in Florida were without power as a result of the widespread devastation caused by the storm, which snapped apart trees, leveled homes and tore down power lines across the coastline.

“We’ve never seen storm surge of this magnitude,” Florida Gov. Ron DeSantis told reporters Friday. “The amount of water that’s been rising, and will likely continue to rise today even as the storm is passing, is basically a 500-year flooding event.”

President Joe Biden said Ian “could be the deadliest hurricane in Florida’s history” during an address from FEMA headquarters on Thursday.

“The numbers we have are still unclear, but we’re hearing early reports of what may be substantial loss of life,” the president added. “We know many families are hurting. Many, many, are hurting today.”

Ian made its third landfall in South Carolina as a Category 1 storm on Friday afternoon. At least four deaths have been reported in North Carolina as a result of storm-related events.