On September 11, 2001, 33 passengers, five flight attendants and two pilots aboard United Airlines Flight 93 were killed after four members of the Islamic extremist group al Qaeda crashed the plane in a field in Shanksville, Pennsylvania.

While the plane’s target is still not definitively known, it is believed that the terrorists were potentially targeting the White House or the U.S. Capitol.

The passengers and crew had already begun their counterattack, bravely working their way toward the cockpit and worrying the hijackers who then plowed the aircraft into the ground at 563 miles per hour. 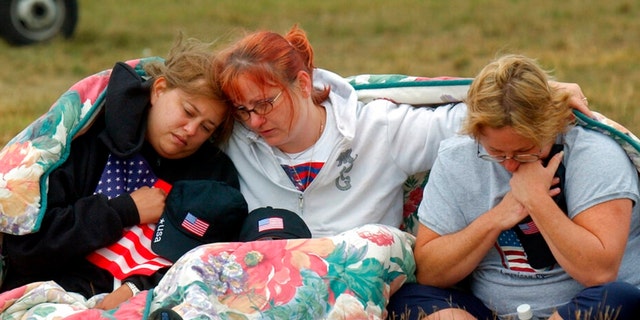 ADVANCE FOR PUBLICATION ON SUNDAY, SEPT. 5, AND THEREAFTER – FILE – In this Wednesday, Sept. 11, 2002 file photo, from left, Shannon Barry, Lisa Starr and Michelle Wagner, all of Hershey, Pa., comfort each other as they listen to a memorial service for victims of Flight 93 near Shanksville, Pa. President Bush will lay a wreath at the crash site later in the day to mark the anniversary of the terrorist attacks.
(AP Photo/Julie Jacobson, File)

President Joe Biden will visit all three sites of the 9/11 attacks.

The closed, 90-minute-long ceremony will begin at 9:45 a.m. ET at the Memorial Plaza.

At 10:30 a.m. ET — the moment Flight 93 plummeted to the ground — the names of the passengers and crew members will be read with the ringing of the Bells of Remembrance.

The name of Gordon Felt’s brother, passenger Edward Porter Felt, will be among them. 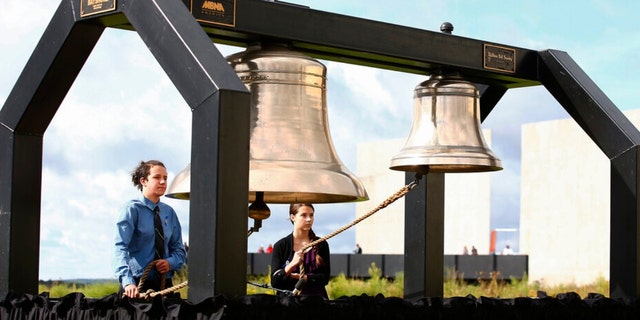 FILE – Matthew Prosser and Gina Rhoads of Shanksville-Stonycreek High School ring the Bells of Remembrance during the service of remembrance tribute to the passengers and crew of Flight 93 at the Flight 93 National Memorial in Shanksville, Pa, Sunday, Sept. 11, 2016, as the nation marks the 15th anniversary of the Sept. 11 attacks.
(AP Photo/Jared Wickerham, File)

“The families of Flight 93 look forward to gathering this year on the 20th anniversary of September 11th to honor our loved ones and their heroic actions. We are grateful to the National Park Service for their efforts to allow this to be done in a safe and respectful manner with technology in place to assure that the ceremony is accessible to all,” Felt — who will also speak — wrote in a National Park Service release detailing the event.

Following the morning ceremony, the public is invited to attend an hour-long Memorial Tribute Concert at 3 p.m. ET performed by the Johnstown Symphony Orchestra at the Memorial Plaza.

“What is really a unique yet very exciting aspect of the 20th is the participation of the family members,” Stephen M. Clark, Superintendent of the Western Pennsylvania National Park Service sites, told Fox News on Tuesday — noting that of that 650 attendees approximately 500 would be family members.

The 35-year veteran of the agency said that roughly 75 million Americans have been born since that fateful day. 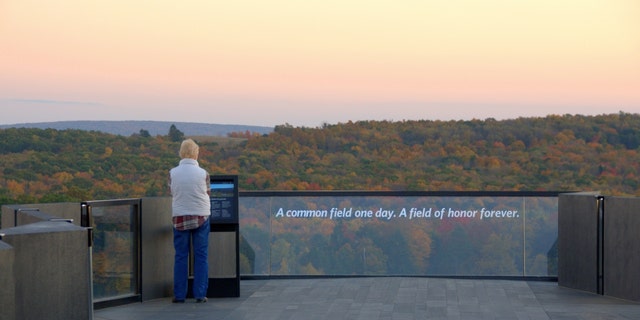 “Well, you start with the fact that roughly 75 million Americans have been born since 9/11. Having spoken with some of the family members, you know, they want to bring even grade school children, high school kids who weren’t born yet. They want to bring them to the place where their grandfather died. Or, you know, a part of history that is so profound,” he said. “And, I think that’s why so many family members have been looking forward to the 20th.”

Clark noted that many may refer to the Somerset County site as: “‘Isn’t that where that plane crashed in the field in Pennsylvania somewhere?’”

However, he said, the story of the heroes aboard the 757 airliner is what sets the Flight 93 National Memorial apart.

“Because 9:37 until 93 crashed at 10:03, what happened in that timeline — these 26 minutes — absolutely really will stand the test of time as far as courage in the United States’ history,” he told Fox News. 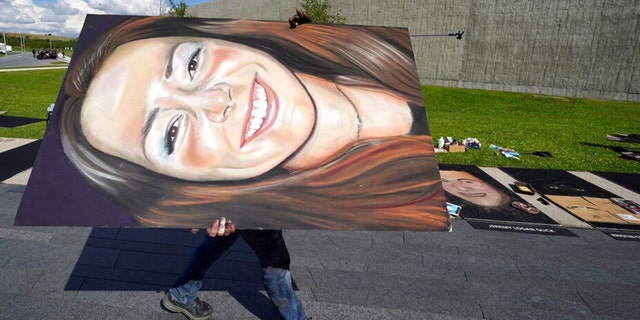 A chalk portrait of Deora Frances Bodley, from San Diego, is carried along the flight path leading to the Flight 93 National Memorial on Thursday, Sept. 9, 2021, in Shanksville, Pa., as the nation prepares to mark the 20th anniversary of the Sept. 11, 2001 attacks, Saturday, Sept. 11, 2021. 40 chalk portraits of the passengers and crew of Flight 93, were created by 11 chalk artists from around the country over two days.
(AP Photo/Gene J. Puskar)

“But, my hope is that at all three attack sites that our nation takes a step back and truly does appreciate the sacrifice that our first responders in New York and at the Pentagon made and those aboard Flight 93 in unspeakable, unbelievable circumstances — that we do remember the sacrifice and that we don’t take for granted our freedom and what this nation really stands for,” the superintendent stated.

Saturday’s event at the memorial — created with the September 2002 passing of the Flight 93 National Memorial Act — will be livestreamed on Facebook.

Park grounds will reopen to the public following the conclusion of the ceremony’s wreath-laying at the Wall of Names and after the ceremonial gate to the crash site will be opened to family members.

Amidst the pandemic, and variant-fueled waves, the National Park Service is requiring all those who visit the memorial wear masks regardless of vaccination status in all buildings and in outdoor spaces where physical distancing cannot be maintained.