Grandmother, 74, warns of dangers of e-scooters after falling off one on seafront promenade and ending up black and blue 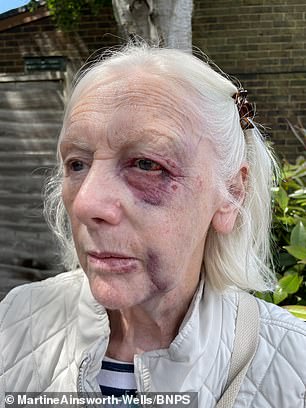 Christine Ainsworth-Wells tried out a Beryl hire e-scooter in Bournemouth, Dorset, only to crash on the seafront promenade

A 74-year-old grandmother has warned of the dangers of e-scooters after she was left black and blue when she fell off one.

Christine Ainsworth-Wells tried out a Beryl hire e-scooter in Bournemouth, Dorset, only to crash on the seafront promenade.

She fell head first onto the prom and was rushed to hospital and treated for a fractured eye socket and wrist.

Mrs Ainsworth-Wells is still in shock as she has been left badly bruised and has no feeling on the left side of her face.

Her daughter, Martine Ainsworth-Wells, 48, has now warned others of the perils of the ‘lethal’ vehicles as she believes people could die riding them.

She explained that it was her idea to give one of the devices a try before letting her mum have a go.

She said: ‘We had both used Beryl bikes while in Bournemouth and had really enjoyed the experience. We talked about trying the scooters and uploaded our driving licences and read the information on the app.

‘While we were taking a walk along the seafront, we saw a scooter in one of the bays. I said to my mum “we should give it a try while we’re here”. There was only one scooter that we could access.

‘I had a little go then said to my mum “do you want to have a little go?” She got on, pressed the go button and the scooter just shot off. It was a matter of seconds.

‘She crashed and she landed on her head on the seafront.

‘Luckily there were people around and they ran forward and called an ambulance. 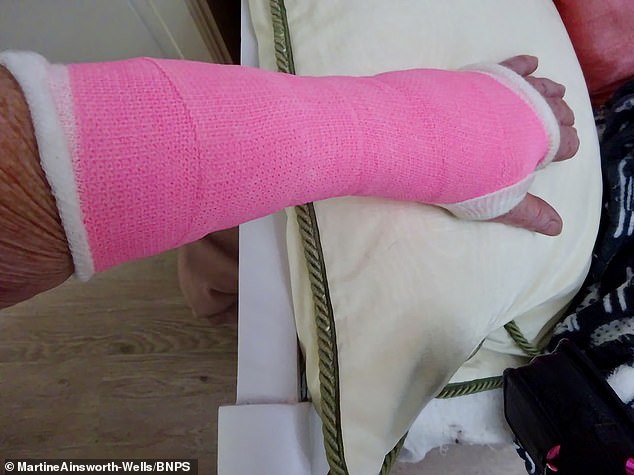 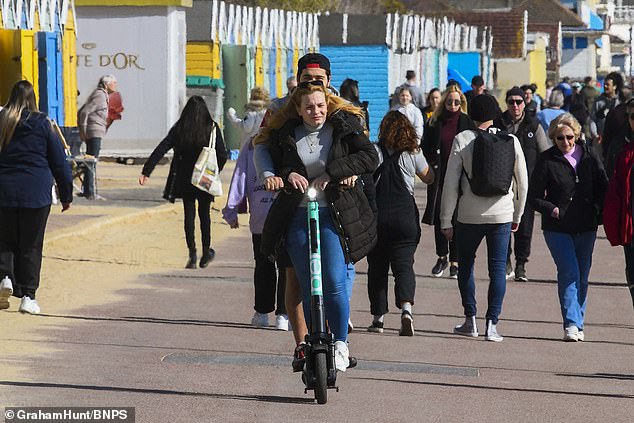 The e-scooters are being trialled in Bournemouth, Dorset, pictured, where riders can hire the device if they have at least a provisional driving licence and are aged 18 or over

‘A passing fireman stopped and gave my mum some first aid. We were taken to Poole Hospital and were there for about eight hours. My mum was diagnosed with a broken eye socket and suspected broken wrist.

‘She still has absolutely no feeling at all in the left hand side of her mouth.

‘We were just behaving as human beings behave.

‘People need to wear a helmet and take a skills test before using a scooter.

‘My mum is seriously injured and wanted to say to the public that they look like toys but they are not.

‘We appreciate that partaking in any activity of this nature is at our own risk, but we feel that there could have been more instructional signage at the bay where we picked up the scooter to try.

‘I’ve tried them and I am not against trying to use something new but wear a helmet and get a skills test.’

A Beryl spokesperson said: ‘We’re sorry to hear of Ms Ainsworth-Wells’ collision while using one of our e-scooters.

‘Every user goes through important safety information when signing up to use one of our e-scooters; these measures are important so that users are aware of the key information to operate the device safely.

‘Regrettably, we have been made aware that the e-scooter used by Ms Ainsworth-Well was unlocked by another user for her. Using another person’s account and licence is illegal.

‘We’d like to take this opportunity to remind people that e-scooters are for the account holder’s use only.’

E-scooters are considered motor vehicles and all users must be over 18 years old and have at least a provisional driving licence to use them during the trial period.