Hamilton musical war ends on a high note for Victoria

Sometimes, as US founding father and wily political operative Alexander Hamilton well knew, it is worth losing the (opening night) battle to win the wider war.

As it was with the cultural blockbuster musical, Hamilton, whose Australian premiere became a states’ rights battle between two premiers hooked on major events. 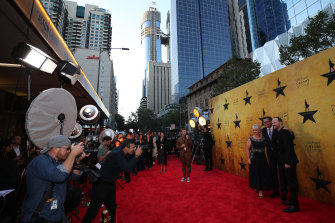 Victorian Premier Daniel Andrews and his wife Catherine Andrews pose on the red carpet with Michael Cassel on Thursday evening.Credit:Getty

The fight, in which super producer Michael Cassel appealed to our political leaders’ lust for bread and circuses, was won by NSW and then premier Gladys Berejiklan, who attended the Australian premiere last March in a black bolero jacket created especially for her by the show’s costume designers.

The Sydney production lost 150 performances but could not extend the theatre booking and now, just one COVID-interrupted year later, Hamilton calls Melbourne home and held its premiere on Thursday night at Her Majesty’s Theatre.

Alas, the blockbuster’s designers failed to extend a similar courtesy to Victorian Premier Dan Andrews, who turned up in civvies accompanied by his wife, Catherine Andrews and his three children. The family whisked past the media pack at warp speed.

Jeff Kennett was more leisurely until wife Felicity got on his case. “Hurry up, I want to get in.” 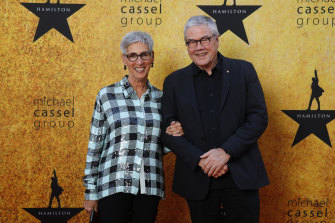 To accommodate the largest red carpet event Melbourne has seen in recent times, Exhibition Street was partially closed to traffic as the city’s political, business, media, sporting and celebrity aristocracy took their seats, fully masked in the 1700-capacity theatre. 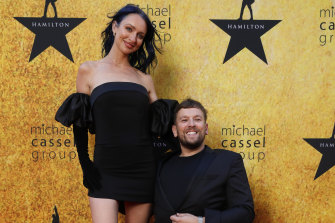 Chantelle Otten and Dylan Alcott pose for a photo at the premiere.Credit:Getty

He said: “There’s one song The Room Where It Happens which takes you back to your first dreams of being a politician. I’m not saying that’s necessarily a healthy thing.”

There were also plenty of state government ministers, including Martin Pakula and Martin Foley.

Following on from our item yesterday, the Facebook political advertising spending spree continues, and there is no surprise that Clive Palmer’s United Australian Party is the No.1 political carpet bomber on Facebook over the past 90 days. 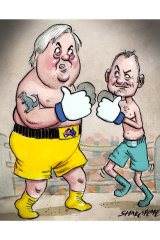 The party, which appears to have shamelessly ripped its colour and styling cues from a Hazmat sign, has dropped $417,000 into Mark Zuckerberg’s coffers. Palmer himself spent a further $132,000. And the starting gun hasn’t even been fired.

Climate 200, the fund generously financed by the top end of town to fight the climate war against moderate Liberals in inner-city electorates, is also splashing the cash in a huge way, forking out $344,000 in the past 90 days. The founder is Simon Holmes a Court, son of the late resources billionaire Robert Holmes a Court, who has raised more than $7 million from 8000 donors, including multimillionaires who might previously have called the Liberal Party home, such as Sportsgirl owner Naomi Milgrom.

But apart from acres of coverage, Climate 200 is actually not very popular where it counts on Facebook. UAP has 117,900 Facebook likes on its page and has it all over Climate 200, with a desultory 2300 likes. Hence the climate activists have to spend up big to match UAP’s reach. Palmer himself has a massive 202,800 likes. 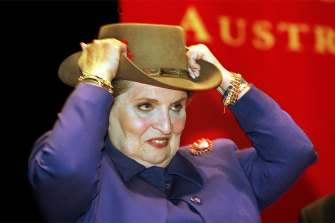 Albright with the Akubra given to her by former foreign affairs minister Alexander Downer during her visit to Australia in 1998. Credit:Robert Pearce

And it’s another regrettable vale to one of this column’s heroines. Farewell to the former US secretary of state Madeleine Albright whose pioneering application of sartorial diplomacy, command of the Russian language and not-for-turning hawkish sensibility won over your columnists.

And one colleague had the fortune of meeting the hawk in the flesh. Esteemed Age journalist Chip Le Grand met the glass-ceiling demolition expert as an exchange student at Georgetown University. She was his professor.

“It was 1992, the year leading up to Clinton’s election. I was hungover for some of her morning tutes because my Russian politics class the previous night always ended up at the pub,” he told CBD regarding what he calls a “line in the sand’ moment with the formidable foreign policy expert.

One morning, he received a handwritten note from Albright impressing the importance of attendance. “To those not schooled in the liberal ways of university attendance, such a note could be mistaken as a polite, gentle reminder,” he said. “But from a senior academic … this is line in the sand stuff. An ultimatum to either get my act together or take it to someone else’s class. Move it or lose it, buddy. And prompted by what? Missing one lousy class and turning up late for the next. Surely, only the most hawkish of administrators would get their feathers ruffled over such a minor transgression.” Quite!

But inside the classroom, Albright clearly knew how to navigate loud voices and big opinions. “She rarely dominated debate and interjected infrequently, often allowing the discussion to meander off on unforeseen tangents — much to the chagrin of students from the university’s military stream,” Le Grand said, before noting what could be her most enduring, local legacy: ”She wrote me a kind reference which helped me get hired as a copy kid at The Oz. So she is pretty much to blame for inflicting 30 years of my journalism on our readers.” 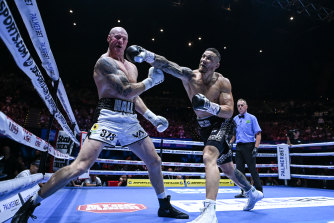 Just as the seashore played the stage to our tetrapod ancestors migrating from the water to the land, the boxing ring bore witness to a pivotal point in evolutionary history on Wednesday as football legends Sonny Bill Williams and Barry Hall ditched the footy pitch for the gloves.

And given Stan is owned by Nine, which is the owner of this masthead, there was no shortage of media heavyweights watching on in the bleachers. Nine chief executive Mike Sneesby, who ascended to the role from chief executive’s chair at Stan, was spotted ringside alongside his freshly appointed successor Martin Kugler and NRL commentator Andrew Johns. Nearby were boxing stars including Anthony Mundine — who himself graduated from rugby league to boxing — alongside Danny Green and Sydney-born world lightweight boxing champion George Kambosos jnr who started boxing after a shortlived football career playing in the Gymea Gorillas under-11s.

Others watching on included Sydney Roosters chair Nick Politis along with coach Trent Robinson whose relationship with ex-Rooster Williams must be good considering they were granted access to Williams’ change room before the fight. Cricketer Steve Waugh and former AFL star Wayne Carey also attended the event. Omnipresent PR queen Roxy Jacenko was in the stands along with comedian Dave Hughes and newly minted Australian citizen Quade Cooper.

Also spotted: nightclub czar John Ibrahim clearly enjoying a school night out after becoming a new father. The Kings Cross identity watched the match alongside media heavyweight Mark Fennessy who has joined with Ibrahim on an upcoming drama series, Last King of the Cross.

Jacqueline Maley cuts through the noise of the federal election campaign with news, views and expert analysis. Sign up to our Australia Votes 2022 newsletter here.