Head boy, 16, steals a kiss and a hug from Meghan Markle

‘She really is beautiful, innit’: Head boy, 16, steals a kiss and a hug from Meghan Markle during her final solo engagement as a working member of the Royal Family to an east London school

For a woman who plans her every public appearance in meticulous detail, it must have come as quite a surprise when 16-year-old Aker Okoye bounded on to the stage – and went straight in for a kiss on the cheek.

To rapturous applause from fellow pupils at Robert Clack Upper School in Dagenham, East London, Aker beamed as the Duchess of Sussex laughed and wagged her finger in mock admonishment.

And he still wasn’t finished. Waiting for the cheers to die down – and with excellent comic timing – he then leaned in to the microphone to say: ‘She really is beautiful, innit.’ Cue more whoops. 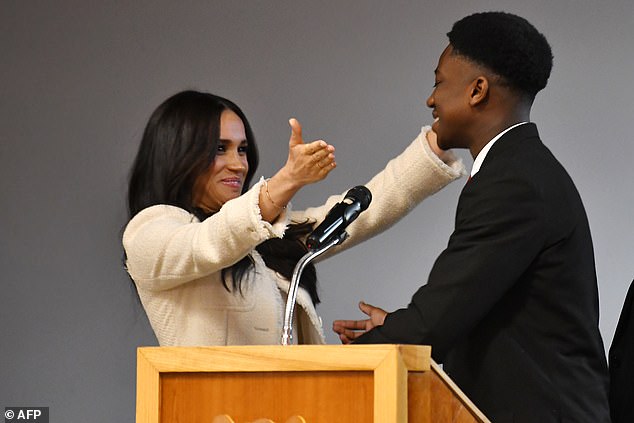 Britain’s Meghan, Duchess of Sussex (left) goes to embrace student Aker Okoye during a school assembly as part of a visit to Robert Clack School in Essex, on March 6, 2020, in support of International Women’s Day 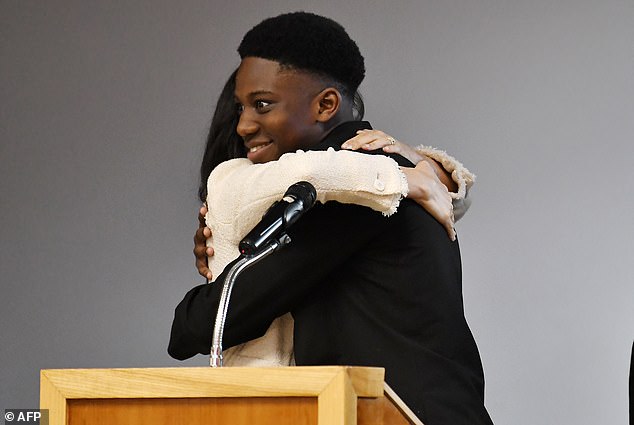 Britain’s Meghan, Duchess of Sussex (L) embraces student Aker Okoye during a school assembly as part of a visit to Robert Clack School in Essex, yesterday, in support of International Women’s Day

Irish trip puts Wills and Kate ahead in battle of Instagram

Drinking pints of Guinness, posing in his-and-hers wax jackets and learning how to juggle. There was nothing remotely controversial in the picture highlights of the Duke and Duchess of Cambridge’s Ireland tour on the couple’s KensingtonRoyal Instagram account.

But their Irish photo album has been enough to nudge them into the lead over the rival account run by Harry and Meghan.

In January, the Sussexes were in the lead with 11.1 million followers on their SussexRoyal Instagram account, while the Cambridges trailed with 11 million. Now Kate and William have surged to 11.3 million thanks to last week’s successful tour, while the Sussexes have 11.2 million.

Harry and Meghan launched their site last April when Kate and William already had seven million fans. Since then, Harry has been gaining on his brother and briefly led the field with a popular New Year’s video montage.

This was Meghan’s final solo engagement as a working member of the Royal Family, and for those present – not least head boy Aker – it will be remembered for ever.

The Duchess had chosen to mark today’s International Women’s Day with a visit to Dagenham, where a group of women machinists at the nearby Ford car factory sparked a famous revolution – not to mention a feature film – with their demands for equal pay.

Showcasing her favourite themes of female empowerment and education, Meghan could hardly have picked a better way to bow out.

Pupils arriving at school on Friday had been told to expect a VIP, and between them they speculated that perhaps Boris Johnson, Beyoncé or even Jackie Chan might be paying them a visit.

Not even those names would have outshone the Duchess for full Hollywood charm, however.

She was in no way deterred by the minor matter of coronavirus. Teachers who met her joked they weren’t sure whether to offer her a handshake or elbow bump. ‘It’s OK!’ she said, holding out her hand.

As ever, Meghan had done her homework. When introduced to one of the teenagers in the debating team, she recognised his name from her briefing notes and said: ‘You’re student mayor as well, aren’t you? Impressive.’ An endless supply of gushing compliments (‘Amazing! Talented!’) was punctuated with rhetorical questions – ‘Am I right?!’ – and motivating soundbites about how we must all ‘stand in our truth’.

‘I’m just so proud to be able to witness so much of this activism and this energy that you have in this room,’ she told one group. ‘So well done. You guys are going to do great.’ Meghan dropped another clue about her private thoughts in a poetry lesson when a pupil explained that she felt a particular connection with a poet’s Sikh heritage. ‘Oftentimes, when it’s someone who looks like you and comes from where you come from, it’s easier to connect,’ replied the Duchess.

Only when she met Geraldine Dear, 66, one of the women who took part in the 1984 strike for equal pay at the Ford plant in Dagenham, did Meghan appear to hit a rare false note. ‘Well done on making such an important change for this country,’ she told Geraldine, whose bravery had helped bring about the Equal Pay Act. ‘I’m sure it’s not an easy thing to do but it’s the right thing to do.’ 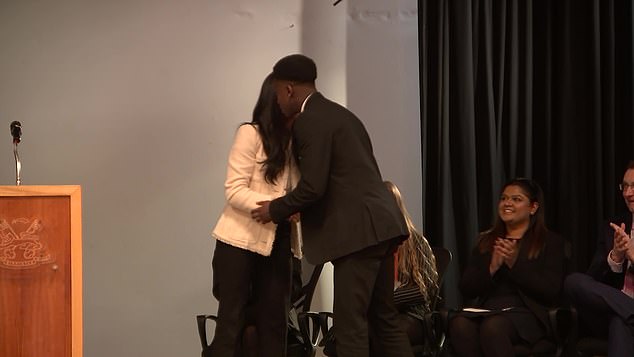 Meghan, Duchess of Sussex (L) smiles as the student Aker Okoye speaks during a school assembly as part of a visit to Robert Clack School in Essex yesterday in support of International Women’s Day. Aker broke protocol and kissed Meghan on the cheek 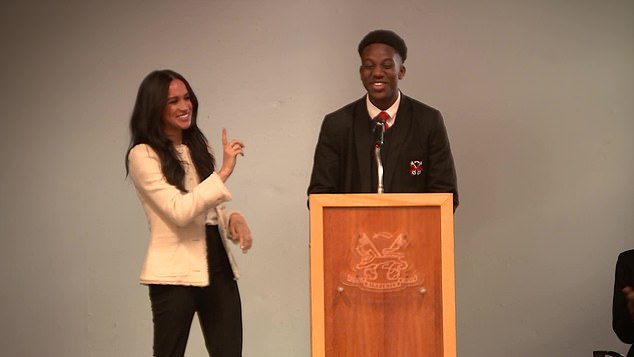 Meghan, Duchess of Sussex (L) smiles as the student Aker Okoye speaks during a school assembly as part of a visit to Robert Clack School in Essex, yesterday, in support of International Women’s Day 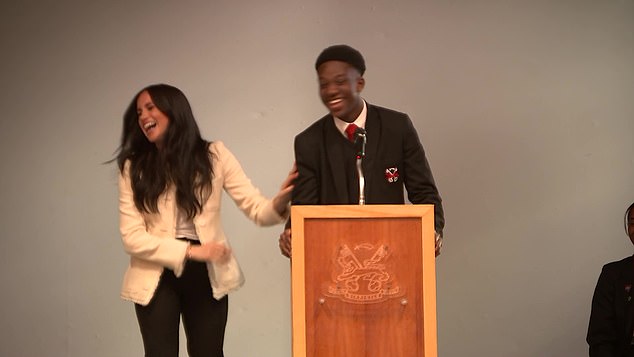 Meghan, Duchess of Sussex (L) smiles as the student Aker Okoye speaks during a school assembly as part of a visit to Robert Clack School in Essex, yesterday, in support of International Women’s Day

If Geraldine felt slightly patronised, she didn’t show it: ‘It wasn’t easy but it was the right thing to do,’ she confirmed.

Standing up in front of the school assembly, Meghan was in her element: ‘Your school mantra, as you all know is what? Excellence for all, excellence from all, right?’ she asked the room. ‘So if that’s the case, how does that apply in your mind, do you think, to International Women’s Day?

And that’s when she called for a ‘brave young man’ to come up on stage to explain the importance of it all – and for one rare moment, Meghan found herself upstaged by 16-year-old Aker. 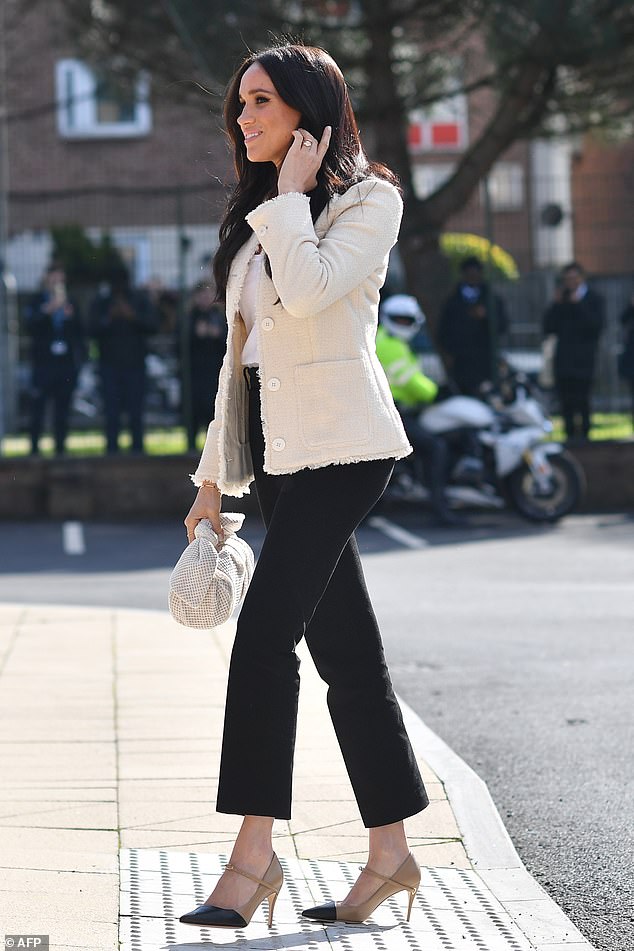 ‘I had to speak the truth there,’ he told the room. ‘International Women’s Day is a reminder to everyone that women can do it all and do do it all.

‘This is more of a message to all you guys. Maybe this Sunday could be the one day we don’t look at women as objects.’

‘Well done. Very well said,’ replied Meghan as Aker hugged her and left the stage. ‘And incredible confidence, won’t you all agree?’

Britain’s Meghan, Duchess of Sussex poses with school children making the ‘Equality’ sign following a school assembly during a visit to Robert Clack School in Essex, on March 6, 2020, in support of International Women’s Day

Aker is not the only one to be dazzled by Meghan, of course. This is a woman whose unrelenting optimism and love of the limelight gives her public engagements a real sense of razzmatazz.

The Duchess might have been the first person ever to describe the town of Dagenham as ‘incredibly profound’, but she got away with it.

It’s not a dance – It’s a demand for equality…

People are being urged to post pictures on social media making the ‘equals’ sign – the official symbol for today’s 2020 International Women’s Day. To strike the pose, put your arms across the front of your body so they are parallel, with one arm slightly higher than the other, and palms facing downwards.

Organisers of this year’s event say the symbol ‘shows that you are committing to being “each for equal” and that you will challenge the status quo and help forge women’s equality’. Ideally this should be done in a group, with one or more of the group foregoing the stance to hold up a Selfie Card, which can be downloaded from the IWD’s site. Post snaps on social media using hashtags #IWD2020 #EachforEqual.

It was, she said, because of ‘Geraldine and the other women who had the strength to really stand up for something that needed to be done. No matter how small you might feel… you have a voice.’

Before she left, headmaster Russell Taylor asked all the students to pose for a picture with the Duchess, holding their forearms parallel to make an ‘equals’ sign – this year’s IWD symbol for equality.

Meghan’s tub-thumping speech about how ‘you can be whatever you want to be’ might seem schmaltzy to some but will be remembered for ever by these teenagers.

That, and the fact that their chum wangled a kiss from a Duchess with a real talent for this sort of thing and a clear wish to emulate the grace of Michelle Obama. Why, then, is Meghan quitting Royal life?

Is it because, with the Duchess of Cambridge in the mix, Meghan would never be Head Girl?

What a pity that Meghan couldn’t take her own advice that, no matter how small you feel, you can still make a difference.

And she could still be ‘everything she wants to be’ while staying in the Royal Family to such effect.