Colleen Dray first went to the Olympic Ice Skating Centre in Oakleigh, in 1978, to watch her four young sons learn to skate.

The boys didn’t take to it but Colleen fell in love with skating, started taking lessons herself and eventually learned ice dancing. 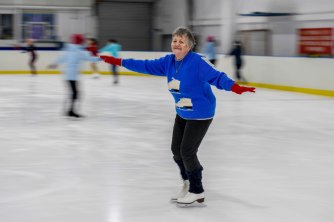 It was a welcome “time out” from everyday life as she mastered a new move.

And today at age 74, once a week, you will still find her at the Oakleigh rink, happily gliding along, in her element.

She has arthritis in the knees and back but reckons it would be worse if not for skating keeping her moving.

She still finds that her everyday cares melt away. “It virtually clears your mind and you concentrate on other things. You feel refreshed.” 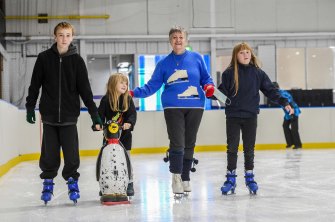 The Olympic’s owner, Joey Hughes, said its devoted customers have sustained the rink, which on July 7 marks 50 years since its official opening.

Mr Hughes said many people feel an emotional connection to the place, such as it being the site of a first date.

The Olympic was founded in 1971 and run into the 1980s, by legendary ice skating couple Graham and Pat Argue who staged ice revues and produced shows for Moomba Festival, the Sidney Myer Music Bowl and shopping centres.

In recent years, the rink had worn down. It closed for 10 months due to COVID-19 restrictions, and Mr Hughes contemplated closing it for good. 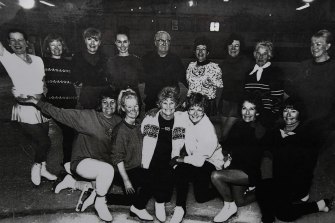 The Silverblades ice skating group in 1993. Colleen Dray is at front, far left and Olympic rink co-founder Pat Argue is fourth from left at front.

But last year more than 480 supporters raised $69,000 on crowdfunding to fund the levelling of pipes under the ice, a roof upgrade, a de-humidifying machine, and new boards around the rink.

Among the many sport and social groups for whom the Olympic is a second home is the Silverblades, an adult skating club that meets every Wednesday morning to have a social skate and learn new skills, then socialise over tea, coffee and homemade cakes.

Ms Dray was an original member when the Silverblades formed 40 years ago and says “I love it so much”.

They have an annual Christmas concert, doing solo moves and group routines to a theme such as the circus or Aladdin. Mrs Dray is proud that members did exercises online and even dressed up and did a virtual concert when the rink was closed during the pandemic.

Prue Ffelan, 75, of East Bentleigh said joining Silverblades three years ago got her out of the house and making friends while recovering from cancer, and it reminds her of happy times as a teenager skating at the St Moritz rink in St Kilda.

“The people are just fantastic. I come out of there and I feel brilliant.”