By the end of the 1800s, Victorians had gorged nearly all the state’s native oysters out of existence.

Such was the appetite for oysters that overfishing in Victorian waterways left the marine habitat severely damaged, dramatically reducing the shellfish numbers and all but wiping out the local trade. Decades later, dredging also did considerable harm to oyster stocks.

But now there is a plan to bring native oysters back in the waters of East Gippsland by launching Victoria’s first Indigenous-run oyster farm. 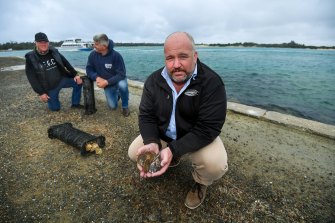 Gunaikurnai general manager on country operations Daniel Miller with oysters that will be grown in Lakes Entrance. Behind him are Steve Cooper from the Flinders Oyster Company and Craig Ingham from Victorian Fisheries Authority. Credit:Joe Armao

The precise locations for the aquaculture project in Lakes Entrance were being finalised last week, as part of a three-year trial expected to produce up to 30 tonnes of oysters annually.

The Gunaikurnai Land and Waters Aboriginal Corporation and the Victorian Fisheries Authority have entered into a partnership to grow Sydney rock and angasi oysters, which are both native to Victoria.

They’re hoping to crack into the market that is dominated by other states such as Tasmania, which produces almost 3000 tonnes of oysters a year.

Gunaikurnai general manager on country, Daniel Miller, said the project would help create jobs in his community by growing a food source that had long nourished Indigenous people.

“Shellfish have been a staple of coastal people’s lives for thousands of years,” he said.

Mr Miller said the native oyster trial formed another chapter in the story for Indigenous people procuring a traditional source of food.

“It’s never going to be like it was 200 years ago. But the act of doing it together – that is the key part.” 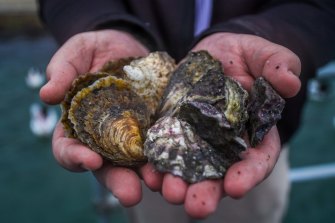 Native oysters will be grown at a farm in Lakes Entrance under a three-year trial. Credit:Joe Armao

It can take about 24 months for an oyster to reach full size. As part of the trial, the oysters will be protected by cases that are placed in the water while the shellfish mature.

This is different from other small-scale trials in Victoria where oysters are being grown on reefs.

The Victorian Fisheries Authority will put up $40,000 and Gunaikurnai Land and Waters Aboriginal Corporation will also contribute to the project.

Victorian Fisheries Authority director of fisheries Dallas D’Silva said he believed the trial could result in a thriving native oyster industry in Lakes Entrance and could eventually employ 30 people.

“We’re really optimistic and confident this will work,” he said. 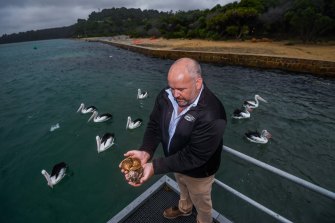 Daniel Miller with native oysters as pelicans circle in the water at Lakes Entrance. Credit:Joe Armao

“The oyster fishing fed the gold rush,” he said. “The two things coincided around the same time.”

But by the end of the 19th century stocks that had previously been abundant in waters, including Port Phillip, Western Port and Corner Inlet had largely been depleted. 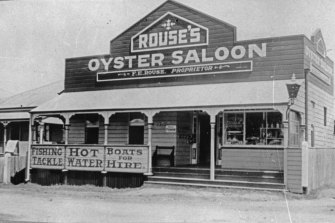 But Dr Ford said the conditions at Lakes Entrance were now ideal for growing oysters.

“It’s open to the ocean, so it gets a lot of water moving in and out.”

Fishing and Boating Minister Melissa Horne said there had been previous attempts to launch an oyster industry in East Gippsland, but they were abandoned mainly due to concerns about the presence of the introduced Pacific oyster species.

In the 1970s and 1980s, authorities were concerned that spat (baby oysters) transported from other states may contain pest species and contaminate the East Gippsland marine environment.

But oyster spat will now be grown in biosecure indoor hatcheries, ensuring they are free of introduced species.

Ms Horne said oyster production had a range of environmental benefits, including filtering the water, while shells could be used to form artificial reefs that provided habitat for marine life.

“By growing things locally you’re also reducing carbon miles in terms of how far a food source has to travel,” Ms Horne said.

Oysters Australia executive officer Andy Myers said traditionally about 70 per cent of oysters consumed in Australia had gone through the food service industry, including restaurants and cafés.

But he said consumption patterns had changed during the pandemic and more people were eating oysters at home.

“There’s a lot of farmers going directly to consumers and a lot more focus on retail,” he said.

Mr Myers said cultivation of oysters was good for the environment because they filtered nutrients in the water.

“They’re filter feeders. The environmental benefits of oysters are fantastic because they clean up the waterways for you.”

Flinders Oyster Company general manager Steve Cooper is in negotiations to supply stock to the new oyster farm from his hatchery at Phillip Island. He also grows the angasi oysters at Western Port.

He said angasi oysters were similar to the French Belon variety, which are among the most expensive in the world.