Inflation hits highest rate since 2008: Price of milk, bread, meat and energy rose 4.2% this year as the economy recovers from COVID – but is it rebounding too fast?

Inflation has set in across America and is on the up, with consumer prices rising by 4.2 percent since April last year, the highest since the months preceding the 2008 global crash, as the economy dives into recovery mode after a COVID-19 catastrophe.

The Consumer Price Index – which surveys the prices of every day items like food, energy and cars, rose by 4.2 percent. Energy prices, which have been volatile, rose by 25 percent. Even when taking energy prices out of the index – something economists do to get a truer picture of what they call the ‘core’ CPI – they rose by 3 percent. Experts had been predicting a sharp increase but not one of this size .

It is the biggest spike in prices since just before the 2008 economic crash, when the CPI – generally considered the inflation rate – was 5.8 percent.

After the banks collapsed in September 2008, the world was plunged into a severe recession and the CPI dropped to -1 percent in 2009. It has taken years to recover.

Some say that it will settle again in the fall whereas others predict this is the start of a more intense spike.

The immediate reality is that life has become more expensive in America as the economy tries to recover from devastating losses over the last 15 months. 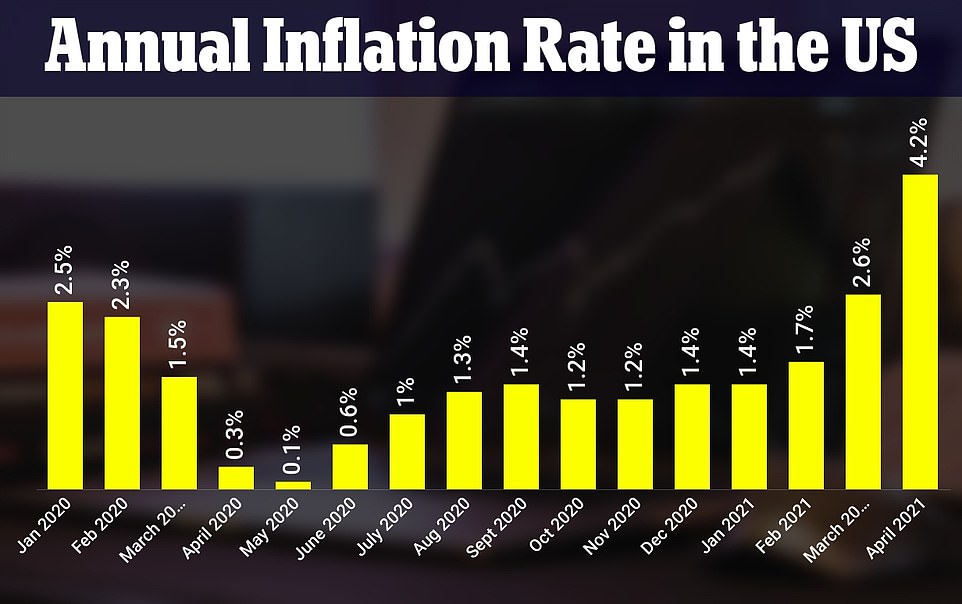 This is how inflation in the US has dipped and risen throughout the pandemic. Wednesday’s figure shows a huge leap. Some economists say that it is nothing to fear and is merely a sign of recovery after devastating losses. Others warn that if it continues to rise, the economy could overheat and force the fed to raise interest rates 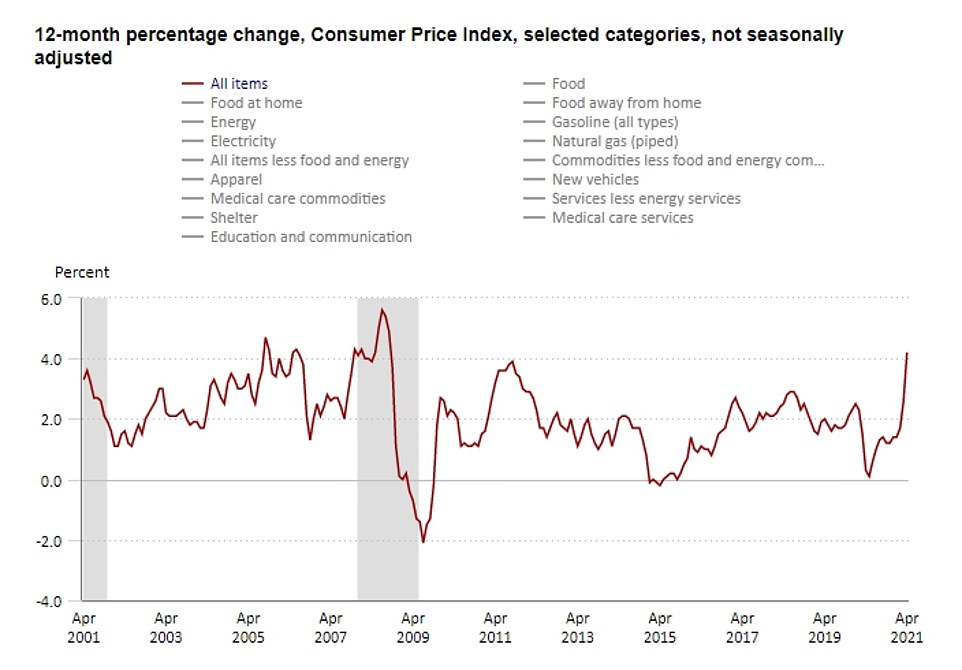 This is how the CPI – which measures the cost of every day items – has changed over the last 20 years. The Fed likes to keep it at around 2 percent, which is where it has hovered mostly. The current figure of 4.2 percent is the highest since just before the financial crash of 2008. Inflation was almost at 6% then because borrowing was cheap and spending out of control. Then, it crashed. In 2020, it dropped enormously. Wednesday’s 4.2% reflects the economy recovering from that but it also has some worried that it signals a looming crisis 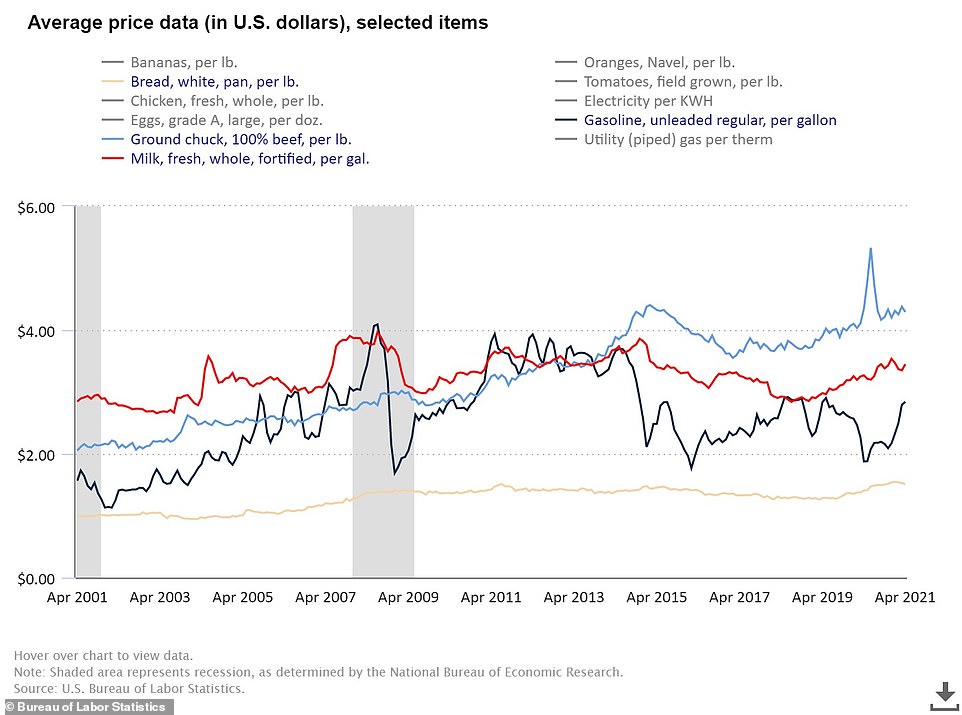 This is how prices of bread (yellow), gas (dark blue), beef (light blue) and milk (red) have fallen and risen over the last 20 years 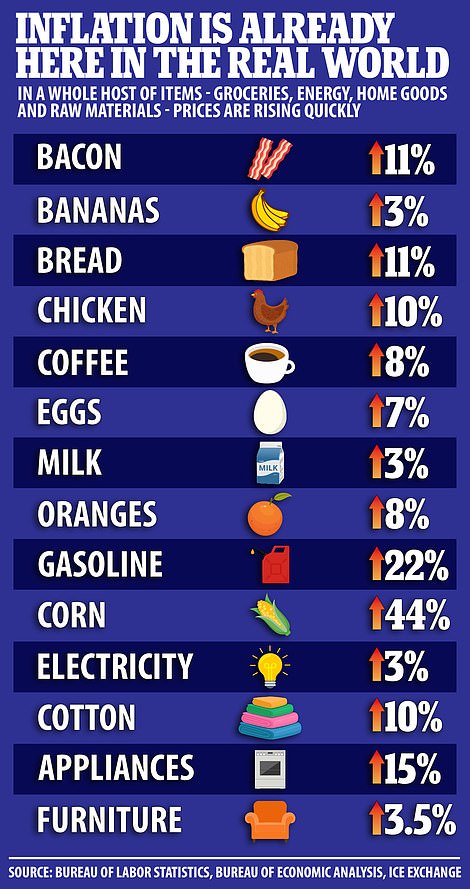 The rise in prices is caused by a combination of factors but the major one is there is a shortage in supply and a surge in demand as more people start to spend more money again.

Another is that businesses need to raise their prices to survive. That is due to a number of things and one of them is having to pay higher wages to workers who could, at the moment, claim generous unemployment benefits for doing no work.

Another is that they need to offset the devastating losses they incurred through months of shutdowns.

That is less than it was last April when the country’s meat supply was threatened by COVID outbreaks in meatpacking factories and it rose to $5.33, but it is still more than the $4.03 it cost in February 2020.

Energy prices rose the most – by 25 percent.

It was down to a sudden halt in demand caused by stay-at-home orders which meant people didn’t need it.

Wednesday’s data from the Bureau of Labor Statistics pile on to an escalating economic situation, caused by COVID and the decisions government has made in response to it.

There are 9million people out-of-work – the unemployment rate is 6 percent – but people can earn more on government benefits than they would if they had a salaried job of $32,000-a-year.

Major industries like tourism and aviation remain severely restricted because of government lockdowns and businesses are trying to get back on their feet.

OVERHEATING: WHAT HAPPENS WHEN AN ECONOMY REBOUNDS TOO FAST

When an economy recovers too quickly and prices outpace how much people are earning, it is known as ‘overheating’.

It normally drives the Federal Reserve to increase interest rates to stop people from spending so much – when it’s more expensive to borrow money, less do it.

But in this case, the Fed has said it won’t increase interest rates while so many people remain out of work.

That means prices could continue to soar, with no one trying to rein them in, while earnings stay the same.

That imbalance cripples the middle and working class.

Whether or not the US economy is currently overheating is the subject of intense debate.

Many, typically Biden supporters, say that it isn’t and that this is just a reaction to offset last year’s losses.

Others, including Warren Buffet, warn that it’s a sign of danger ahead and that if something isn’t done now to tone down stimulus, boost employment and curtail demand, the country could be headed down a dangerous path.

Federal Reserve Chair Jerome Powell has insisted he can keep inflation under control and that any surge will be temporary, economists on both sides of the political spectrum are already predicting the most painful inflation in decades.

The Fed has been keeping its foot to the floor when it comes to supporting the economy: It left interest rates at zero last week.

That keeps money ‘cheap’ – making it easier for banks to lend to each other and to companies.

Some say it’s keeping money too cheap and making the economy run too hot.

Economists at the Bank of Montreal acknowledged that the Federal Reserve, which is charged with keeping inflation in check, has said the inflation bump will be ‘transitory’ – or passing.

‘Well, yes, but an earthquake is also transitory,’ the said in a recent note to clients. ‘When you run things hot, you risk getting burned.’

Billionaire Warren Buffett said last month that the economy was ‘red hot’ and noted the stimulus that was passed by Congress and being handed out by the Fed was kicking most of the economy into ‘super high gear.’

The average American should care about inflation because it affects the value of their dollar: For every tick it goes up, their dollar becomes worse less.

Some inflation is good – as everyone wants a higher paycheck, for instance – but when it rises too quickly, paychecks don’t keep up with price rises.

And when inflation gets out of control – when it expands much faster than the 2 percent level that the Federal Reserve has set as a general target – then that can cause economic problems – even a recession.

He warned: ‘While there are enormous uncertainties, there is a chance that macroeconomic stimulus on a scale closer to World War II levels than normal recession levels will set off inflationary pressures of a kind we have not seen in a generation, with consequences for the value of the dollar and financial stability,’ in an article for The Washington Post.