'It's like The Purge': Terrified Israelis say police are overwhelmed

‘It’s like The Purge in real life’: Terrified Israelis say police are overwhelmed trying to deal with Arab mobs seeking vengeance for Gaza airstrikes with Jewish homeowners taking sniper positions on roofs to protect their homes

Israelis have described being attacked by Arab mobs ‘like something out of The Purge’ films amid escalating violence between the two sides that has pushed the region to the brink of all-out war.

People in the city of Lod, on the outskirts of Tel Aviv, say they have been forced to take up positions on the streets and rooftops armed with guns and bats to protect themselves during two nights of rioting by Israeli Arabs.

Synagogues, shops and cars have been torched and while Israeli authorities have now imposed an overnight curfew, those on the ground say there has been little police protection.

Meanwhile, a right-wing Israeli mob was filmed pulling an Arab man from his car just nine miles away in Bat Yam and beating him unconscious, with medics saying he was seriously injured but is now in a ‘stable’ condition.

Etyan Meir, 32, a resident of Lod who has since fled the city with his two children and heavily pregnant wife, described the city to MailOnline as a ‘war zone’ filled with ‘non-stop blasts and screaming’.

Another man who is not from Lod but knows people in the city, said it currently resembles something out of ‘The Purge’ and that he heard of one family sleeping on their rooftop with a rifle for protection. 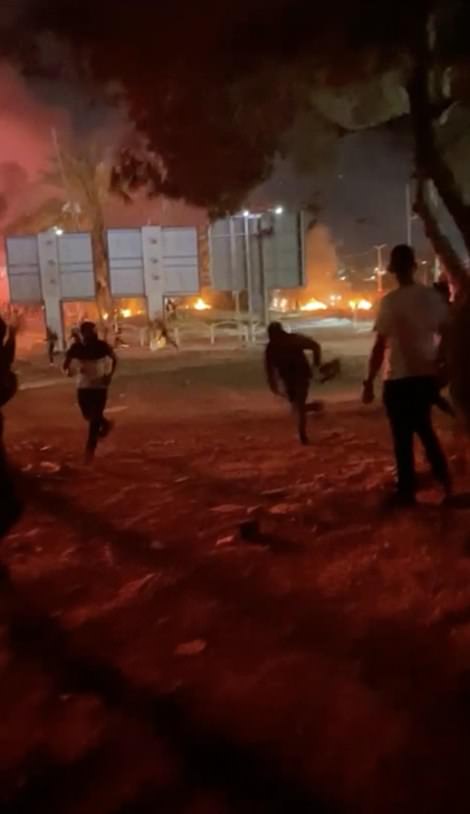 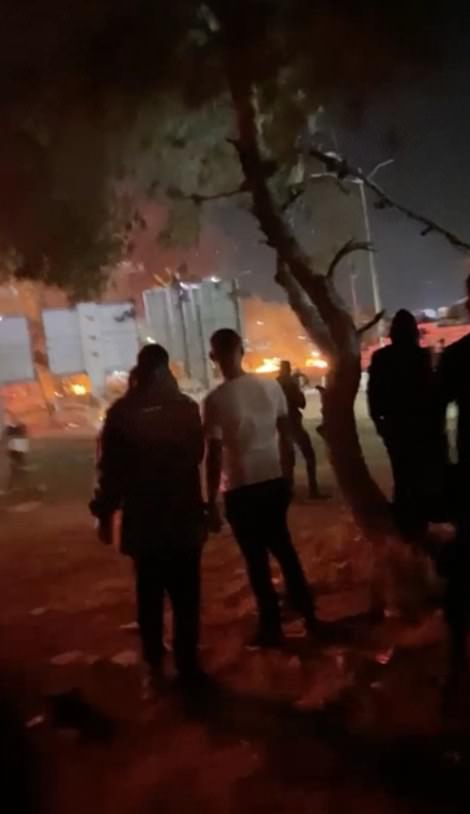 Arabs and Israelis can be seen running away from gunfire amid burning buildings in Lod last night. Residents say there is little effective policing to help them with the situation

Speaking to MailOnline, Mr Meir said: ‘In the evenings for the past three nights, it has literally been a war zone. There has been non stop blasts and screaming.

‘Rioters – who I refer to as terrorists because I don’t think there is another way to refer to them – have been burning Jewish property.

‘Last night there was nine or ten shots. It is frightening – police presence is not enough.

‘We have a community watch and whoever has guns is there on street corners to protect us. There are people armed only with bats.

‘All of our cars and property has been vandalised and shattered and we had it easy. We are about 100 meters away from the Arab neighbourhood and if you go through there, it’s complete wreckage.

‘It is just mayhem and the police are not doing enough. I don’t blame them, we love our police but the higher ups are not giving the right support.

‘They are just using dispersal methods, they are using hand flash grenades and spraying pepper spray which shoos them away for a little bit but then they just come back. This is the situation.

‘For us, the rockets are just the secondary thing.’

Mr Meir said he plans on returning to Lod as soon as his wife has given birth, leaving her and the children behind as he helps his neighbours and friends protect themselves.

One resident in another Sderot, where a Hamas bomb fell yesterday, killing a six year old Israeli boy said: ‘For us, the scariest thing is what is happening right now in Lod.

‘There is not police protection and I can only describe it as like something from the film The Purge.

‘People are having to go out onto the streets with personal guns to protect themselves.

‘Many families have had no sleep now for three nights as all they are doing is desperately trying to protect their children.

‘I heard about one man who slept on the roof of his building with his family and just a pair of binoculars and a gun to protect himself.

‘It is really crazy what is happening in Lod and the police are not helping, I think because they are overwhelmed and too scared themselves.

‘There are thousands of Arabs attacking Jews there. 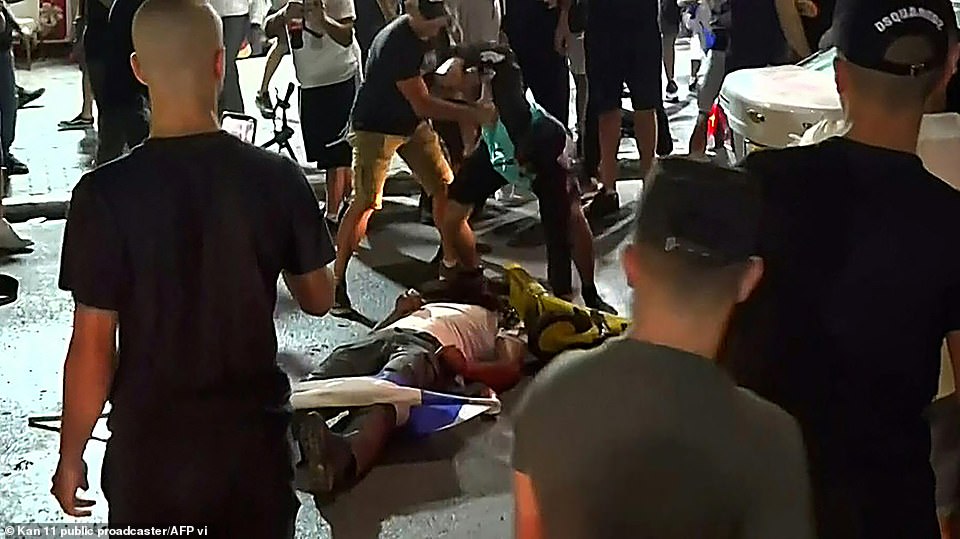 This video grab obtained from a footage released by Kan 11 Public broadcaster on May 12, 2021, shows a far-right Israeli mob attacking who they considered an Arab man, on the seafront promenade of Bat Yam 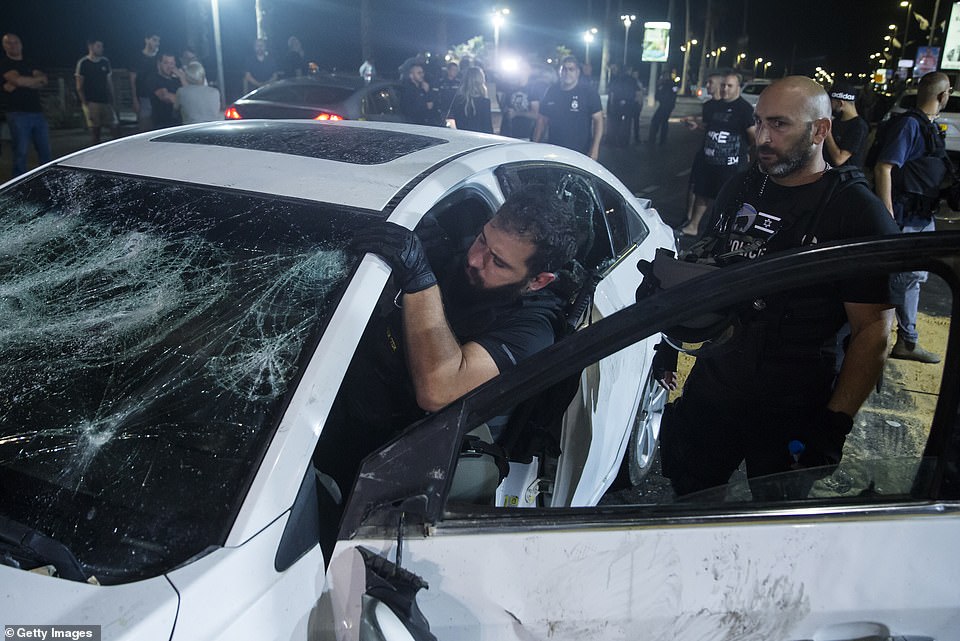 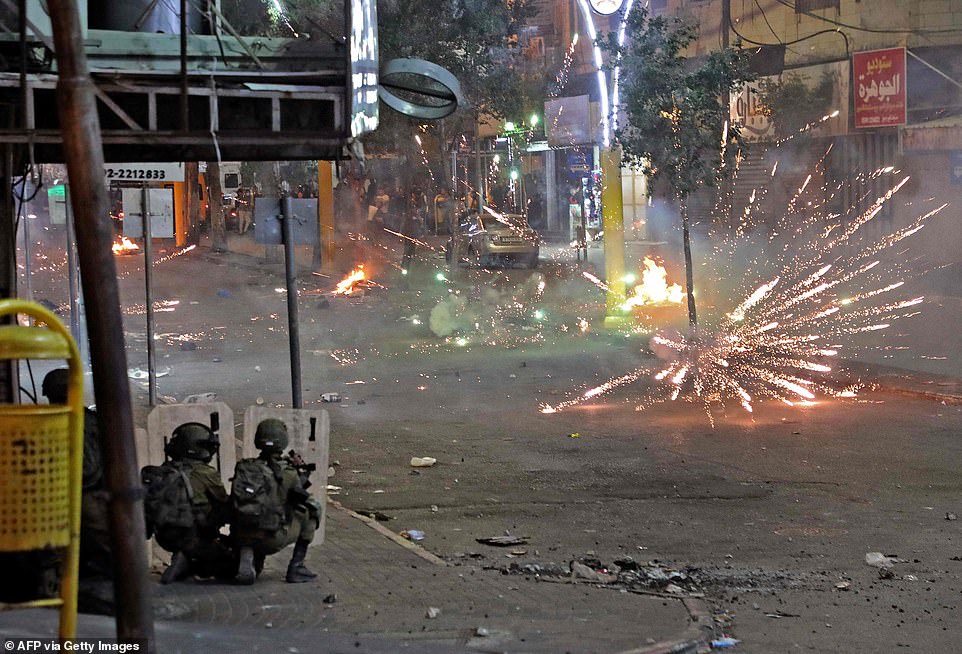 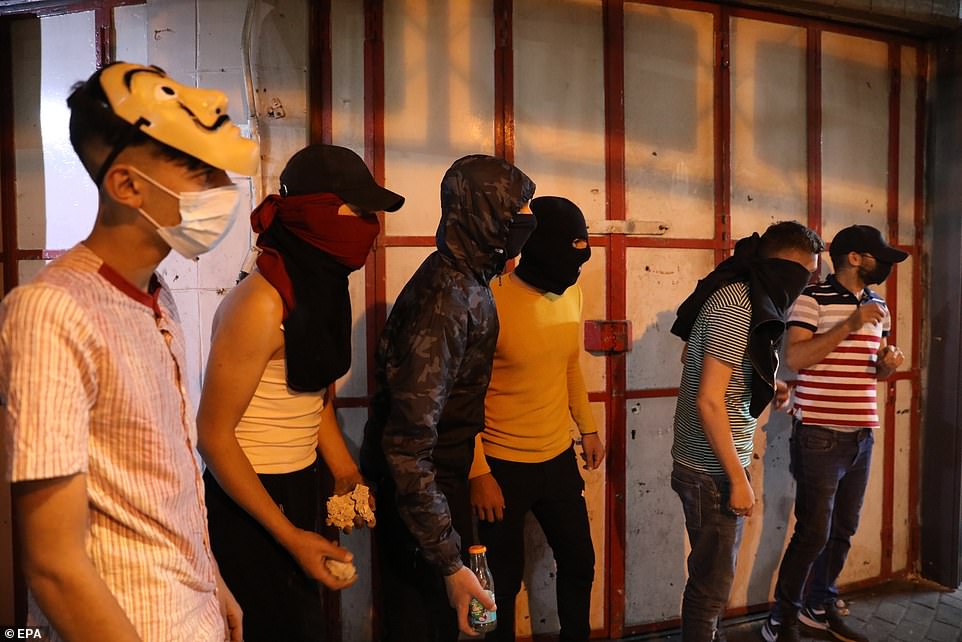 ‘The Israeli border police have been drafted in and they are not a joke. They are not soldiers but have more training than regular police but the Arabs are not scared of them.’

Another resident from Sderot, Dov Trachtman, 29 said:  ‘I had to just come back from shopping when I heard the rocket yesterday. It landed on top of a building.

‘I was shopping because I knew I would have to spend a long time in the shelter so I was preparing.

‘I heard the siren and saw rockets being intercepted by the iron dome and then this one got through.

‘I saw so many clouds but it was not so close to me. A young boy was severely injured from the shrapnel and later died.

‘The home of the mother of my sister-in-law was very badly damaged. She is very traumatised and has been taken to stay with relative in a Southern village to recover.’

Fighting broke out between Israel and Hamas on Monday following a weekend of tensions centered around the Temple Mount compound in Jerusalem, which is a sensitive holy site for both Muslims and Jews.

Muslims had been protesting over access to the site for weeks when violence suddenly escalated last week during the final Friday prayers during Ramadan.

Israeli police used tear gas and stun grenades to disperse crowds at the Al-Aqsa mosque, some of which landed inside the mosque itself, causing outrage that drew more Palestinian protesters on to the streets.

Clashes with Israeli security forces reached a peak on Monday as hundreds of Palestinians were wounded around the mosque and in Jerusalem’s Old City, before Hamas issued a 6pm deadline for police to withdraw.

A first barrage of rockets was fired from Gaza shortly after the deadline lapsed. Since then, Hamas has fired more than 1,000 at locations across Israel including Jerusalem, Tel Aviv, and other cities. 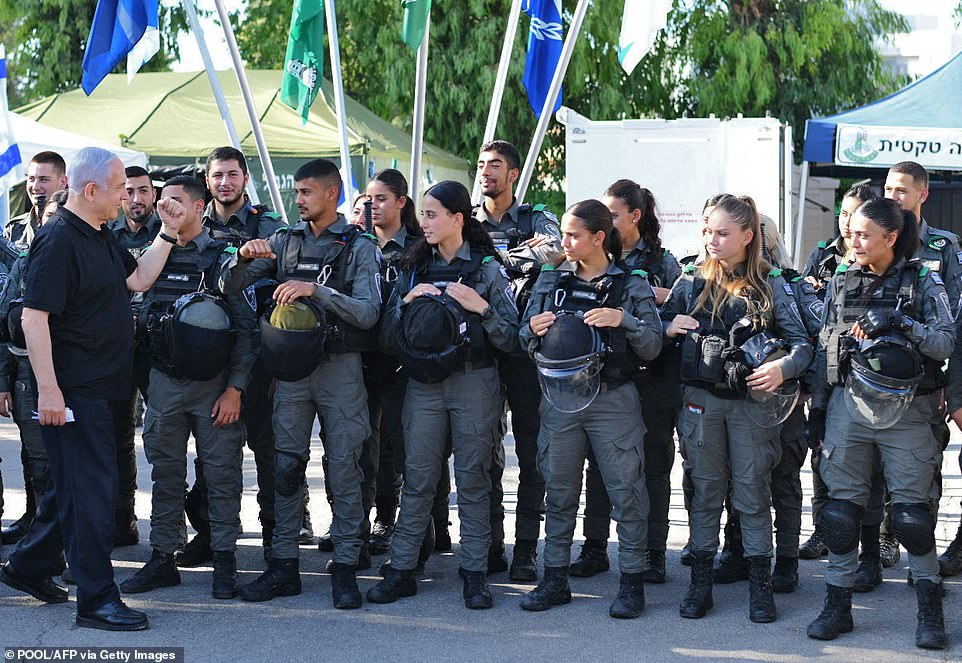 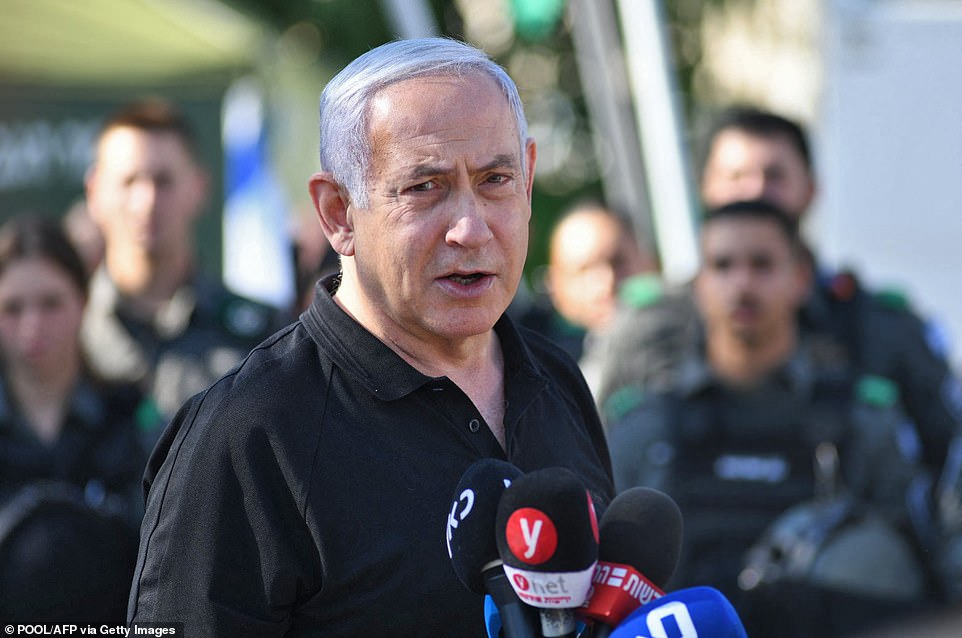 Netanyahu gives a speech to officers charged with keeping the peace in Lod, which has seen synagogues, shops and cars burned during two nights of rioting by Israeli Arabs

Hamas sent another heavy barrage of rockets deep into Israel on Thursday, and Israel pounded Gaza with more airstrikes.

Previous fighting between Israel and Gaza’s Hamas rulers, including a devastating 2014 war, was largely confined to the impoverished and blockaded Palestinian territory and Israeli communities on the frontier.

But this round seems to be rippling farther and wider than at any time since the 2000 Palestinian intifada, or uprising.

While some rocket attacks have reached the Tel Aviv area, Arab and Jewish mobs have rampaged through the streets, savagely beating people and torching cars.

Flights have been canceled or diverted away from the country’s main airport.

Weary Palestinians, meanwhile, somberly marked the end of the Muslim holy month of Ramadan on Thursday as militants fired one barrage of rockets after another and Israel carried out waves of bone-rattling airstrikes.

Since the rockets began Monday, Israel has toppled three high-rise buildings that it said housed Hamas facilities after warning civilians to evacuate.

Gaza’s Health Ministry said the death toll has climbed to 83 Palestinians, including 17 children and seven women, with more than 480 people wounded.

Islamic Jihad confirmed the deaths of seven militants, while Hamas has acknowledged 13 of its militants killed, including a senior commander. Israel says the number of militants dead is much higher.

Seven people have been killed in Israel. Among them were a soldier killed by an anti-tank missile and a 6-year-old child hit in a rocket attack.