London: The bombshell came on the day Boris Johnson should have been celebrating the great unlocking of the British economy following his stunning vaccination drive.

Instead, from a makeshift lectern at his country residence Chequers, where he was isolating after his new Health Secretary Sajid Javid tested positive for coronavirus, the Prime Minister announced that within months, Britons will have to show proof of a jab if they want to party.

“We’re planning to make full vaccination a condition of entry to nightclubs and other venues where large crowds gather,” he said. “Proof of a negative test will no longer be enough,” he said. 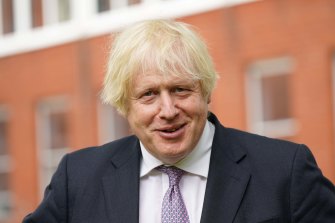 Boris Johnson was reported to be furious with younger Britons who refused to get vaccinated. Credit:Getty

Johnson’s bold proposal mirrors moves across the continent where leaders in Germany, France, Italy and Denmark are threatening, passing or contemplating laws freeing those who are vaccinated to do ordinary things like go out for dinner and potentially punishing those who are not.

Johnson said the changes would come into effect in September when every adult has had the chance to have their two jabs and there are some surprising backers for this European approach, including the Premier League.

This carrot-and-stick approach is also popular with many Britons, according to a February poll by Savanta ComRes which found over half of its respondents favoured pubs and restaurants refusing entry without proof of vaccine.

Johnson’s stance puts him at odds with many of his MPs and key business groups, who say this is mandating vaccines by stealth.

Steve Baker, a lead Brexiteer who helped orchestrate Johnson’s elevation into Number 10, and now co-chairs the COVID Recovery Group of MPs advocating for fewer restrictions, says he is “puzzled” by Johnson’s stance.

“They’re trying to coerce young people with the message ‘get vaccinated or we’ll take away your x-box,’” Baker tells The Sydney Morning Herald and The Age.

Despite the celebrated success of its vaccine rollout, Britain may have hit the limits of demand with around one-third of younger adults aged 18 to 25 in England resisting the jab – even though they’re the ones catching and circulating the virulent Delta strain. Around 12 per cent of Britons remain unvaccinated.

On Monday, The Times of London reported the Prime Minister was “raging” about lower takeup amongst younger refuseniks and was considering also making vaccine passports a requirement to attend lectures on campus.

Many believe Johnson is merely sabre-rattling. But Baker says if the prime minister is resolved to follow Europe’s route, he will be blocked by hostile MPs.

Baker is confident that enough of his colleagues will rebel if Johnson tries to enforce vaccine passports and that the majority of Cabinet is also opposed.

“I don’t think it will succeed and it’s wrong anyway. I don’t want us to treat grown adults this way.” 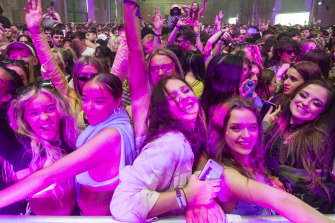 UK clubbers could be barred from the dance floor in September if they haven’t been vaccinated.Credit:Getty

At any rate, he says vaccine passports won’t be needed given the UK’s vaccination takeup is one of the highest in the world and achieved so far with no threats or incentives.

Johnson might need to rely on Labour votes, which this week, opposition leader Keir Starmer suggested might be feasible but “not for everyday use”.

“So, for sporting events, I’ll look at what the Government puts on the table. I want to be pragmatic because we all want all business sectors and sporting sectors to return as quickly as possible but not for everyday use.”

Businesses obliged to enforce vaccine passports have been less enthusiastic.

The British Chambers of Commerce found in an April study, when the vaccinations were nowhere near the levels they have now reached, that 78 per cent of the 1057 employers surveyed had no intention of asking for proof of jab in order for people to come to work.

Claire Walker, director with the Chambers said it was unlikely businesses would ever warm to the idea.

“Businesses still have many unanswered questions about COVID certificates and BCC research shows most firms previously had no plans to use them,” she said.

But some see passports as the key to reopening their lockdown-hit sectors.

In June, 50 gig and indoor sports organisers signed a letter saying they would support “a blanket, industry-wide introduction of COVID-status certification on a temporary basis, to permit the full relaxation of capacity limits from 21 June.”

“[It] could be a pragmatic solution that would enable events to resume at commercially viable attendance levels and will also give further confidence to customers that events are safe to attend,” they said.

The government has found a willing and influential suitor in the Premier League which views a passport scheme as inevitable.

It is keen to promote vaccination take-up and is in talks with the government about trialling passports at pre-season games .

But while the political and business response might be warm, one thing Johnson is likely to have on his side is the public.

“While the Government’s plans to make full vaccination a condition of entry to nightclubs and other venues by the end of September may prove controversial in Westminster, our polling on the issue has consistently found high levels of public support,” he said.

“The majority of UK adults told us back in April that they would find it acceptable for pubs and bars, restaurants and nightclubs to require a vaccine passport, proof of antibodies or a negative test before entry, with most now seeing the Government’s plans as an effective method of convincing young people to get vaccinated and stopping the spread of COVID-19.”

Get a note direct from our foreign correspondents on what’s making headlines around the world. Sign up for the weekly What in the World newsletter here.