Latest Pixar film is about friends, not gays, says director

London: The director of a new Pixar animation has dashed the LGBTQ community’s hope that the film Luca is the company’s first major homosexual production.

Social media was abuzz earlier this year with speculation that the production – a tale of two teenage boys enjoying a summer of self-discovery on the Italian riviera while being forced to hide their true identities – was the plot of a movie exploring closeted homosexuality. 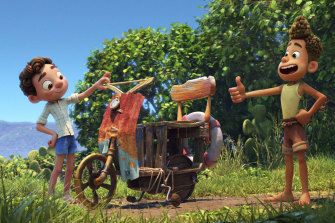 Some have compared Pixar’s “Luca” to “Call Me By Your Name”.

Stills of the film released by the studio earlier this year drew comparisons with Oscar-winning Call Me By Your Name, which stars Timothée Chalamet and Armie Hammer and is about a homosexual romance in the same location.

But instead, Luca is simply about childhood friendships, according to director Enrico Casarosa. He told reporters: “We really wilfully went for a prepubescent story. This is all about platonic friendships. 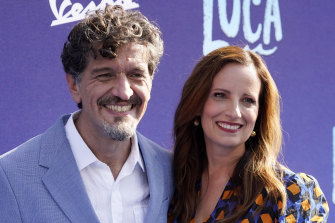 “The inspiration is my best friend and I, and our friendship. We met when we were around 11 or 12.

“I was shy, timid, a little sheltered. He was free to get in trouble, to run around, and it really kind of opened my world.”

He added that the film, which was released on Disney Plus on Friday, was about “those endless summers [that] really can just encapsulate a friendship”.

Nonetheless, some audience members maintain the subtext is a metaphor for something more romantic.

Luca states early in the film: “We can go anywhere. Do anything. We just gotta stick together. 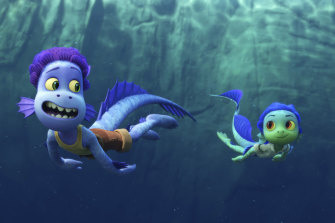 Two sea monsters have to hide their true selves from nearby villagers in the animated film “Luca”.Credit:AP

“This is gonna be the best summer ever. We’ll see the whole world together.

“But there’s just one thing no one can find out.”

This is because, in an extension of the metaphor for some viewers, the locals in the fictional town of Portorosso have a deep-seated hatred of sea monsters, which is what they really are.

The scenes, according to some, bear a clear resemblance to those in Call Me By Your Name, which won an Oscar for Best Adapted Screenplay.

The film, which one critic called “a strange hybrid of Italian neo-realism and fish-based fantasy”, does have a happy ending. Luca and Alberto, eventually outed as denizens of the deep when a rainstorm reverses their transformation, are placed in danger by the revelation of their true identities before finding a degree of acceptance among the locals.