This is the moment Boris Johnson’s father was pictured without a face mask at his local newsagent – meaning he now faces a £200 fine for breaking Covid rules.

Stanley Johnson, 79, who just months ago flew to his Greek villa despite the pandemic travel warnings, was spotted without a face covering as he went to pick up a newspaper in West London on Tuesday.

Meanwhile, former Labour leader Jeremy Corbyn could also be in trouble after being caught breaching the ‘Rule of Six’ during a dinner party.

The scenes come after the Prime Minister yesterday pleaded with the British public to ‘follow the guidance’ and urged people to wear a mask in shops and on public transport during a Downing Street press conference.

After being caught red-handed without a mask, the Prime Minister’s father admitted he was ‘maybe not 100 per cent up to speed’ with the rules having just returned from abroad and said he was ‘extremely sorry’. 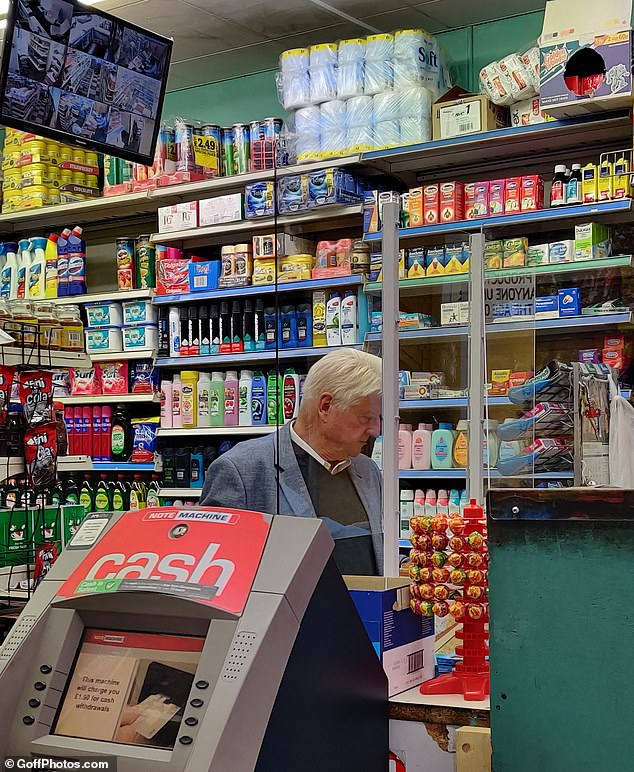 He told the Mirror: ‘I was maybe not 100 per cent up to speed but that was my first day back in England after three weeks not in England.

‘So they (the rules) may have changed in that time. I’m not really a big shopping man.

‘I’m extremely sorry for the slip up and I would urge absolutely everybody to do everything they can to make sure they do follow the rules about masks and social distancing.’

Meanwhile, Environment Secretary George Eustice said today the police would decide if Mr Johnson – and former Labour leader Jeremy Corbyn who was pictured eating a meal with eight others – should be fined.

But he stressed that punishments should only be handed out to those showing a ‘wilful and reckless’ disregard for the restrictions regarding face coverings.

Speaking to BBC Radio 4’s Today programme, Mr Eustice said: ‘The police will decide what approach they should take (with Stanley Johnson) but the appropriate response is to act in a proportionate and pragmatic way.

‘They are only using fines as a last resort where you have wilful and reckless disobedience of the regulations we have in place.

‘I think in both these cases, the (sic) leader of the Opposition (Jeremy Corbyn) and the Prime Minister’s father, in both cases they have admitted to making an error and have apologised for doing so.’

The scenes come just months after the Prime Minister was met with a furious backlash after his father jetted to his four-bed home in Greece – ignoring Foreign Office guidance which stated no one should travel unless it was essential.

Mr Johnson claimed he needed to ‘Covid proof’ his villa before the letting season began.

The retired Tory MEP told local and international press: ‘There is no question of my breaking the law. The minister of tourism here has my papers.

‘It was always absolutely clear from the Greek government that the only thing they were banning were people coming in from direct flights from Britain.’ 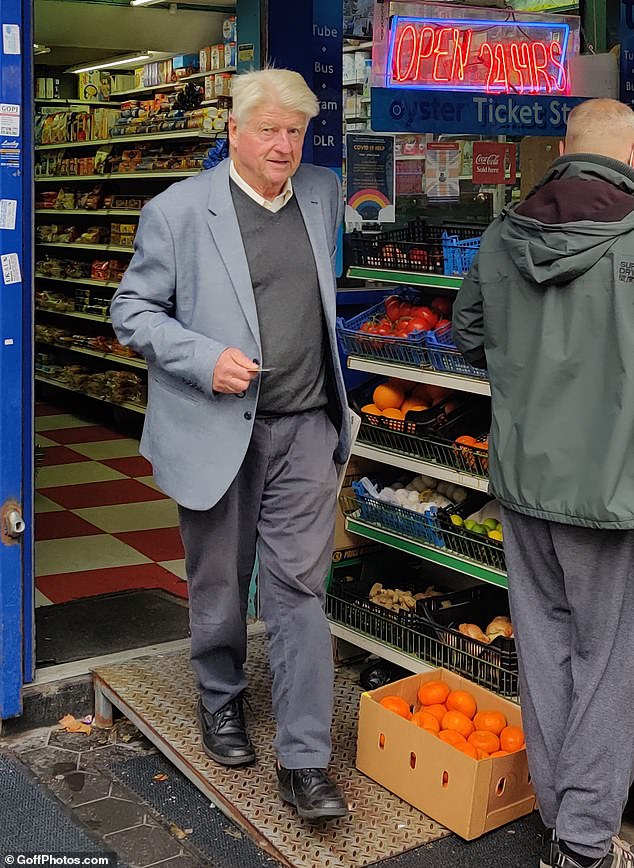 Stanley Johnson, 79, who just months ago flew to his Greek villa despite the pandemic travel warnings, was spotted without a face covering as he went to pick up a newspaper in West London on Tuesday

Locals claimed he arrived to the region by private car after documenting his controversial journey from the UK on social media, sharing a video of himself on a plane and a selfie.

When he was later confronted by international media in Pelion, Mr Johnson said he was unaware of the outcry in Britain about his flight.

‘It is true I took the pictures down,’ he said. ‘But I didn’t put them up in spirit of defiance…. I certainly had no intention of provoking anyone.’

Today Boris Johnson pleaded with Britons to ‘follow the guidance’ in an effort to prevent a second ‘more costly’ lockdown national lockdown.

He said: ‘Let me just say what I’ve said to everybody, please everybody follow the guidance.

‘Bearing in mind, you are doing it not just to protect your neighbour but ultimately someone that you could transmit the disease to that could end up infecting someone that you love. It is absolutely crucial that we stop the spread of this disease.’

He added: ‘Wear a mask on transport in the way that is recommended.

‘And, bear in mind that the fines are now very considerable and they will be imposed.’

Last week, the Prime Minister revealed that fines for failing to wear a face covering would rise to £200 and will become compulsory for bar staff, shop workers, waiters and taxi passengers.