Moment police Taser man, 25, after he threatens them with a MICROWAVE

THIS is the moment cops Tasered a man after he threatened them with a MICROWAVE.

Nathan Caine, 25, brandished the oven after flying into a rage in the café of a YMCA building in Cardiff. 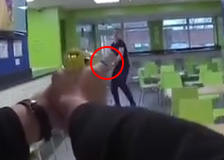 In dramatic bodycam footage he is repeatedly warned to drop the microwave but continues to rock back and forth in a menacing manner.

One of the officers barks: “Put the microwave down”.

But he charges towards to them and attempts to throw it when the cops launch their Taser and send him crashing to the floor.

Caine can be heard mumbling “sorry” as he is cuffed.

The yob, from Barry, near Cardiff, was later sentenced to four months in jail, South Wales Police said.

A spokesperson tweeted: “Despite a number of requests to put the oven down it was necessary to discharge a Taser.

“Tasers are used to ensure the safety of officers and members of the public.” 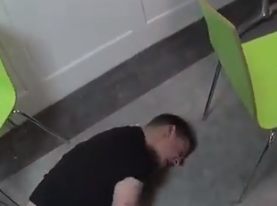