Nike, Apple among dozens of major brands implicated in report on forced labour

Nike, Apple and a major manufacturer building trains in Australia are among the dozens of global brands implicated in a new report on forced labour in China, amid growing international concern over the treatment of the Uighur people.

The report, by the US State Department-funded Australian Strategic Policy Institute, alleges some factories that supply the brands appear to be using Uighur workers sent directly from re-education camps. 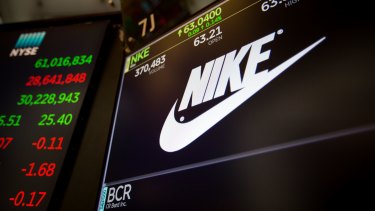 The Chinese government maintains the camps, which it describes as vocational education facilities, are needed to combat terrorism in the Xinjiang region and to "ensure its smooth economic transition".

It has dismissed claims that up to a million members of the Uighur muslim minority have been detained in the camps as "fake news".

The ASPI report estimated that 80,000 Uighurs have since been transferred into factories across China under the "Xinjiang Aid" program after graduating from the re-education camps.

"Local Chinese governments and private brokers are paid a price per head for workers on the labour assignments," ASPI found.

The report by ASPI researcher Vicky Xiuzhong Xu, a Chinese-born former journalist who has been highly critical of the Chinese Communist Party, found most of the workers transferred to one of the factories are Uighur women from Hotan and Kashgar prefectures.

The report alleged up to 600 are employed at the Qingdao Taekwang Shoes factory.

"At the factory, the Uighur labourers make Nike shoes during the day," the report said.

"In the evening, they attend a night school where they study Mandarin, sing the Chinese national anthem and receive vocational training and patriotic education. The curriculum closely mirrors that of Xinjiang’s re-education camps.

"In such circumstances, it is unlikely that their work arrangements are voluntary."

The Washington Post corroborated the claims on Sunday. The Sydney Morning Herald and The Age have not been able to independently verify the allegations before deadline.

ASPI claimed a factory run by the KTK group received 41 Uighur workers in July 2019. It lists CRRC among its customers. The Chinese state-owned rail manufacturer is part of a $2 billion contract to build Melbourne's new high capacity trains.

The research found up to 560 Xinjiang workers were transferred to work in factories in central Henan province, including to Foxconn Technology, a Taiwanese company among the largest contract electronics manufacturers in the world.

ASPI said from April 2017 to June 2018, 2048 Uighur workers were taken from Hotan Prefecture in Xinjiang to 15 factories in Anhui Province, including to Huafu Top Dyed Melange Yarn Co. Ltd.

Adidas told ASPI the company does not have an active relationship with the factory and that they will investigate the use of the Adidas signage.

A Nike spokesman told The Washington Post that "we respect human rights in our extended value chain, and always strive to conduct business ethically and responsibly".

Apple said it would work with suppliers to ensure its standards are upheld.

“This is now a global problem," said Ms Xu. "We’re seeing the practices of the ‘re-education camps’ in Xinjiang being exported to major factories across China and implicating both global brands and their hundreds of millions of consumers."

The ASPI report noted Chinese state media claims that participation in labour transfer programs is voluntary, and Chinese officials have denied any commercial use of forced labour from Xinjiang.

"However, Uighur workers who have been able to leave China and speak out describe the constant fear of being sent back to a detention camp in Xinjiang or even a traditional prison while working at the factories," the report said.

Foreign Affairs Minister Marise Payne has repeatedly called for China to cease "the arbitrary detention of Uighurs and other groups".

The Chinese embassy in Canberra was contacted for comment.