Some of the world’s favorite pastimes have been brought to life in a series of colorized photographs from across the US  during the last century.

From card games, to hopscotch, to marbles, and even crosswords, Americans are seen taking a break from the hustle and bustle of everyday life by indulging in their favorite games.

In one image, young girls took turns to play with a skipping rope in an area of Chicago previously known as the ‘Black Belt’ which was located on the southern side of the city and was home to around 75 per cent of the city’s African-American population.

In another, a group of agricultural strawberry pickers gathered in their bunkhouse to play a game of poker in Hammond, Louisiana in 1939.

Others showed a man raising his hand in victory at a game of bingo in Sarasota Trailer Park in Florida in 1941, and a group of men using Braille playing cards at an institute for the blind in New York City in 1944.

Playing cards have been traced back over 1,000 years to China’s Tang dynasty in the 9th century AD and even bingo is thought to be around 500 years old – inspired by the Italian game of ‘Il Gioco del Lotto d’Italia.’

Surprisingly, skipping ropes can be dated back even further. Egyptian athletes are thought to have used vines to increase their athleticism in 1600 BC – over 3,600 years ago.  Hopscotch too shares ancient origins – the ‘game’ began as a military training drill during the Roman Empire. 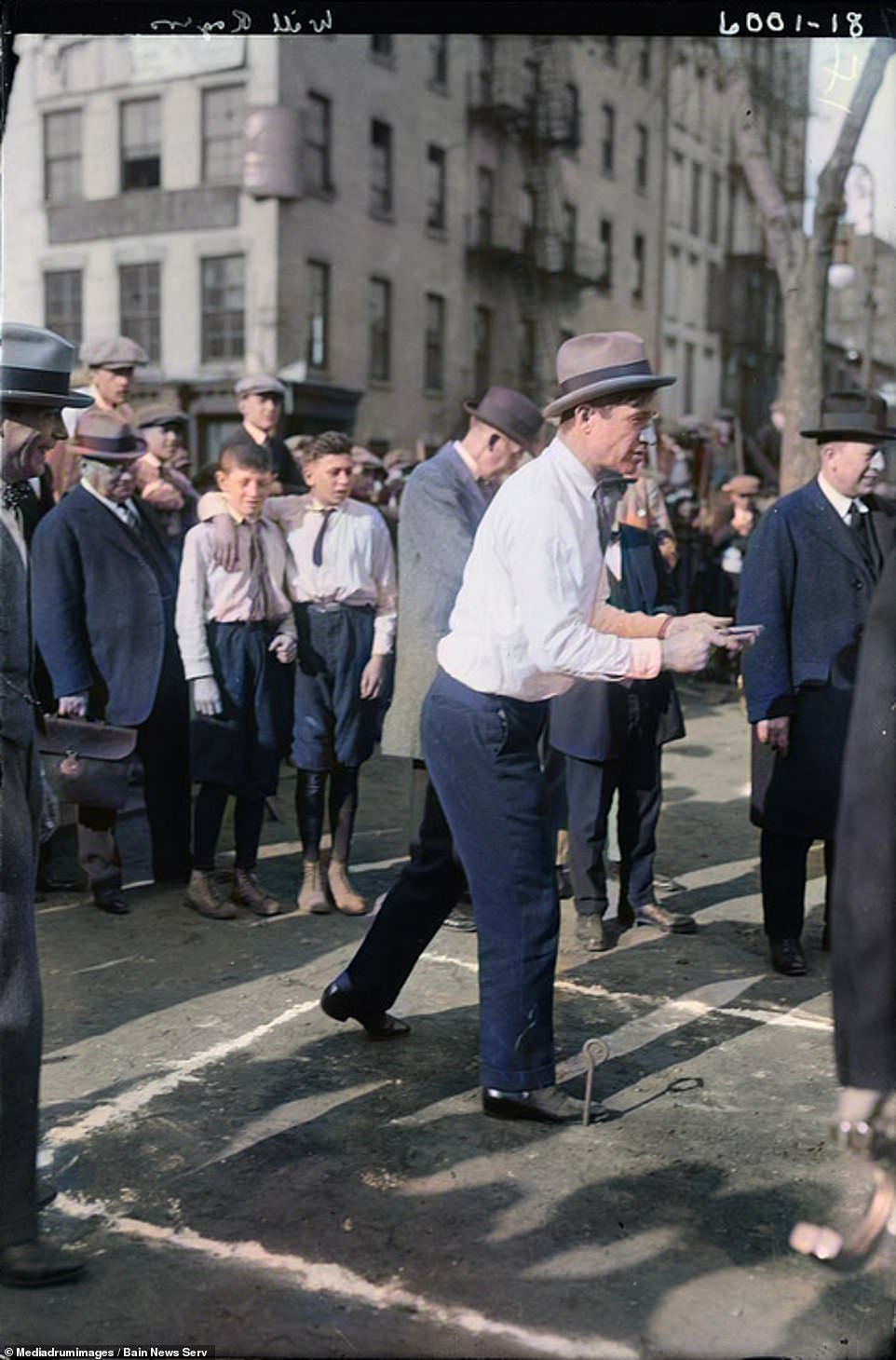 Film actor Will Rogers is seen playing horse-shoe in the middle of the street back in 1910 in this re-colorized picture. Rogers was an entertainer, radio personality, film actor, and writer who was famous for his pithy and homespun humour and social commentary. The game of horse-shoe is played between two people, using four horseshoes, as they take turns to throw the shoes at stakes in the ground which are positioned roughly 40 feet apart 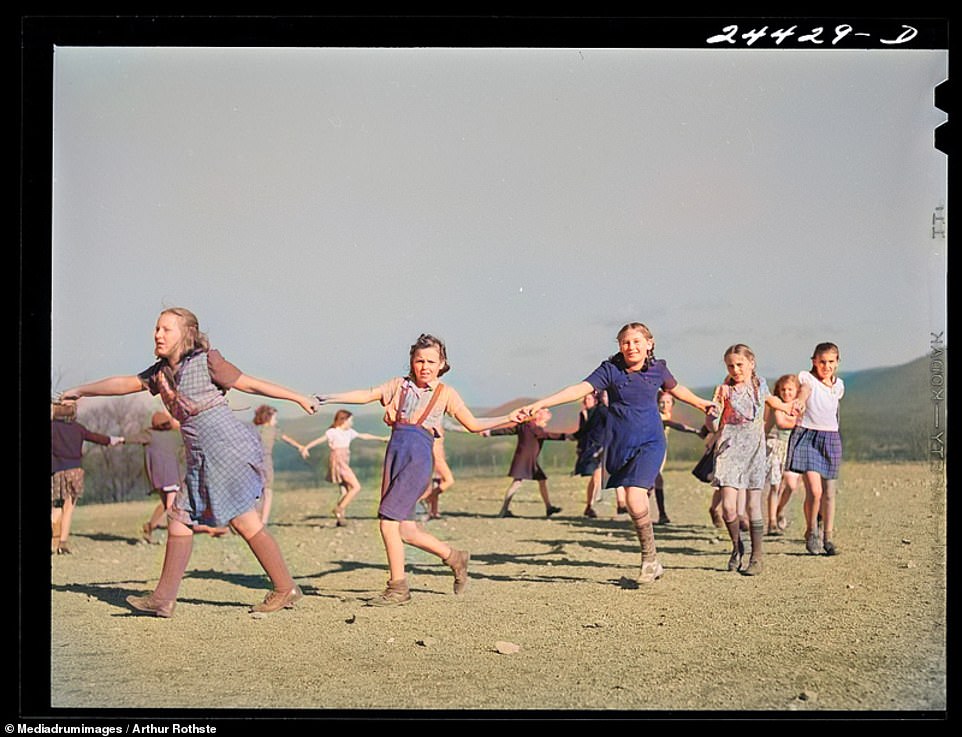 Another pastime which has stood the test of time and is commonly now seen played by schoolchildren are singing games. This group of young girls in Dailey, West Virginia, 1941, are seen holding hands in a large circle and skipping round together while singing a song 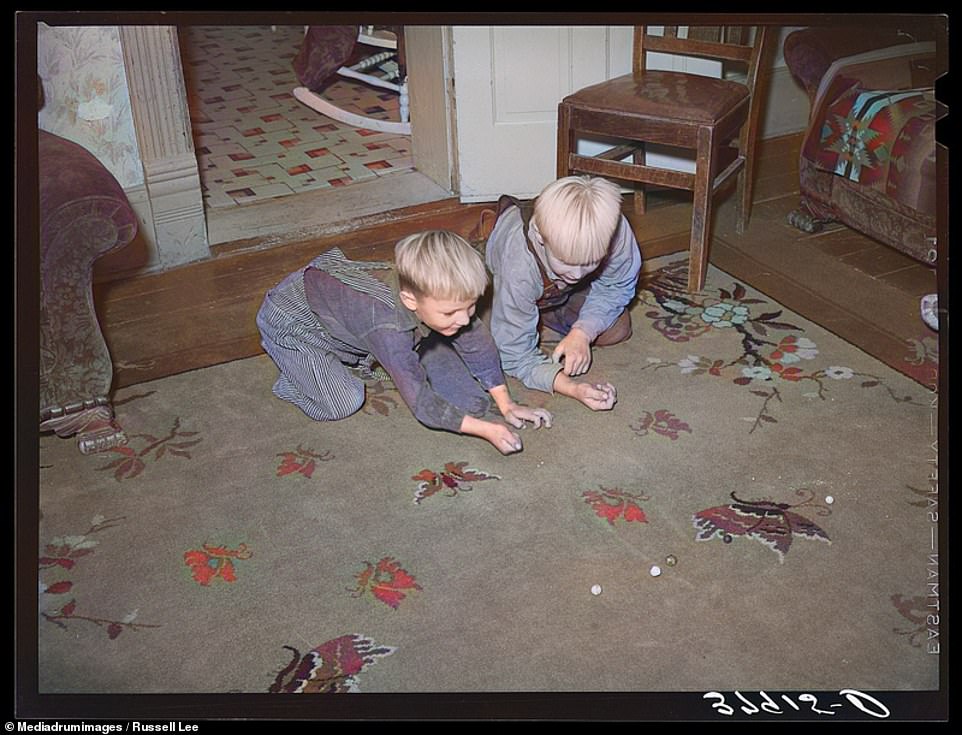 Marbles is another classic game captured among the colorized photographs. In this picture two young boys, from a Mormon family, are seen playing the game on their living room floor in Santa Clara, Utah, 1940. The aim of marbles is to try and knock any number of marbles, positioned in a central spot, out of a marked circle using other marbles 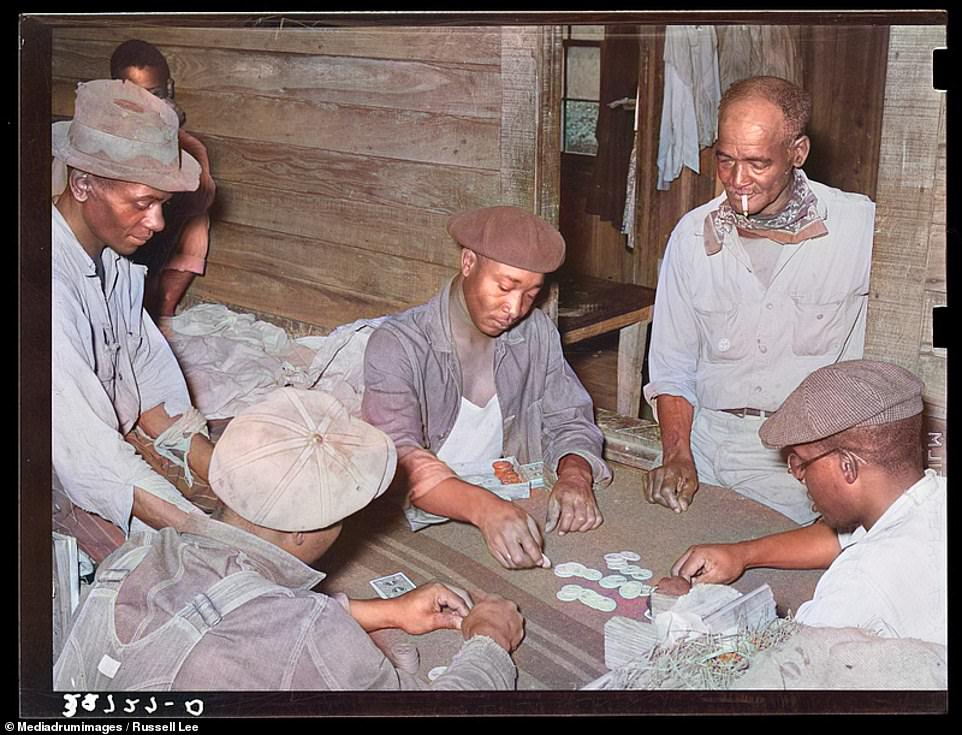 In this picture, a group of agricultural strawberry pickers are seen gathered in their bunkhouse to play a game of poker in Hammond, Louisiana, USA, in 1939. Strawberries were named the state fruit of Louisiana in 1980 and more than 300,000 people flock to the state each year to attend the Strawberry Festival in Ponchatoula, Louisiana 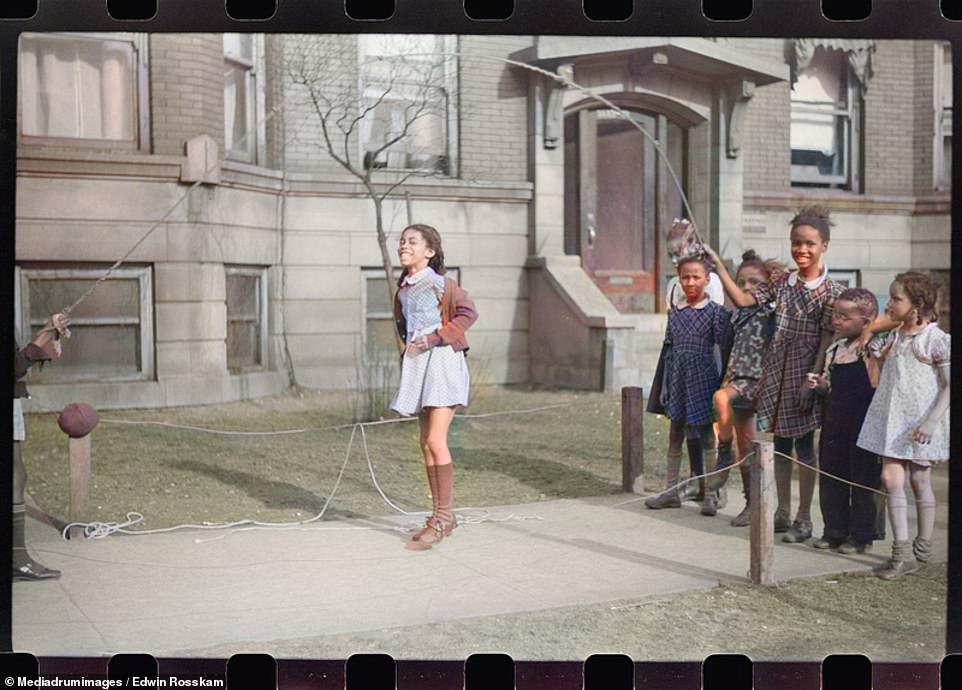 This picture, taken in an area of Chicago previously known as the ‘Black Belt’ in 1941, shows a young girl taking a turn jumping over a long skipping rope with a group of children stood either side watching. The girl has a massive smile as she skips over the rotating rope. The previously named ‘Black Belt’ of Chicago, which was located on the southern side of the city, was home to around 75 per cent of the city’s African-American population 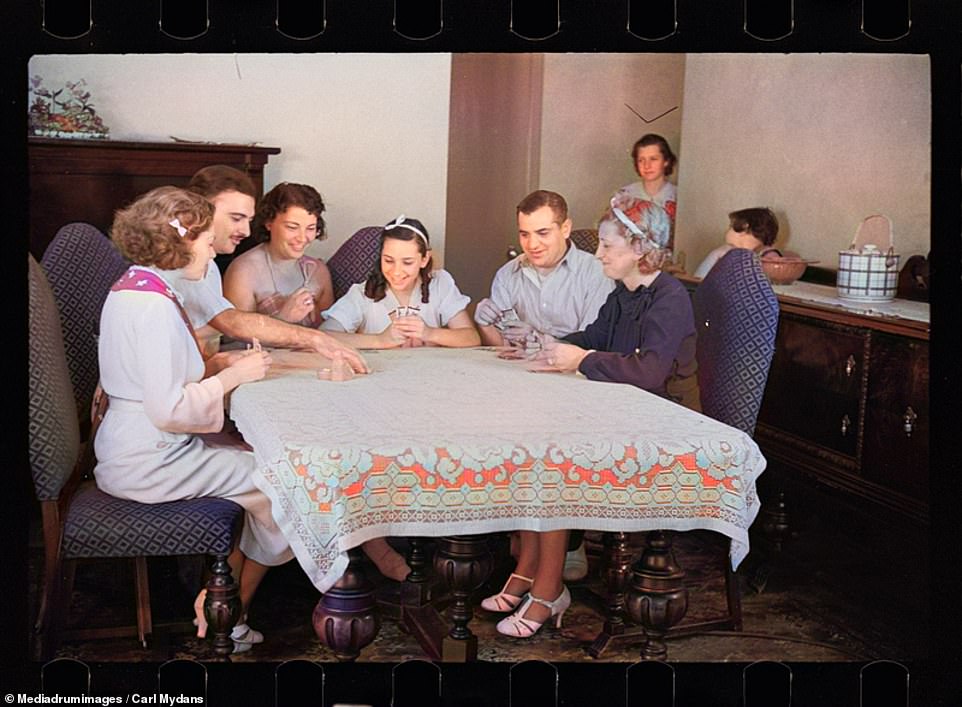 This colorized photograph shows a family sat together round a dining table playing a card game. The picture was taken in one of the new-build homes in the Hightstown project in New Jersey, 1939. It is thought the very earliest versions of modern card games could have been played by the Tang dynasty in 9AD 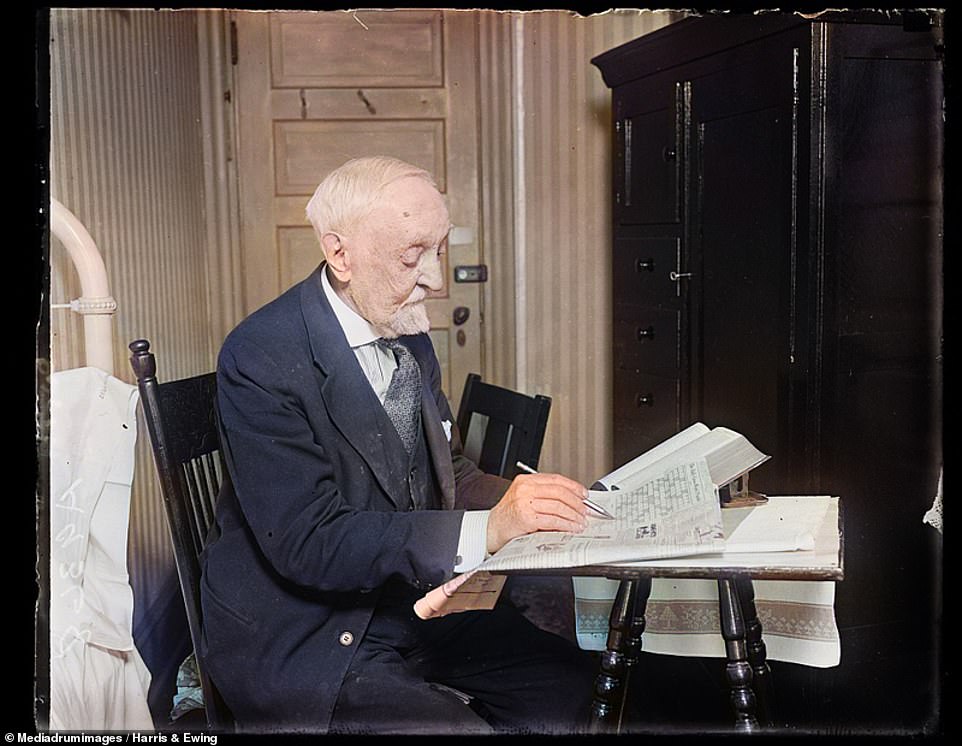 The daily crossword puzzle is one that is still played by many today, though the historic puzzle may have been even more popular back in the 20th century. This picture shows a man named Ambrose Hin tackling a crossword puzzle back in 1925. The very first crossword was run in the New York World newspaper on December 21, 1913 Few games bring out such level of excitement among its player than bingo. This colorized photograph shows a man raising his hand in victory after having won a round at the Sarasota Trailer Park in Florida in 1941. Bingo is thought to be around 500 years old – inspired by the Italian game of ‘Il Gioco del Lotto d’Italia’ 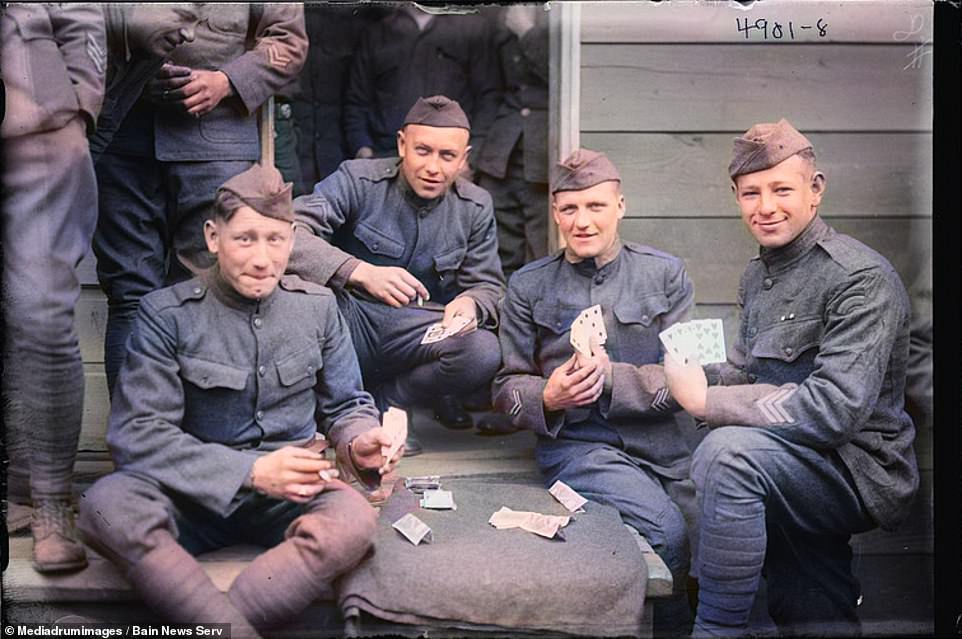 With card games gaining popularity as far back as China in 9 AD it comes as no surprise that soldiers picked up on the habit during their quiet periods. These soldiers, from the 42nd infantry division during the First World War are seen sat on a large step outside of a wooden structure. All four hold out their hands of cards towards the camera 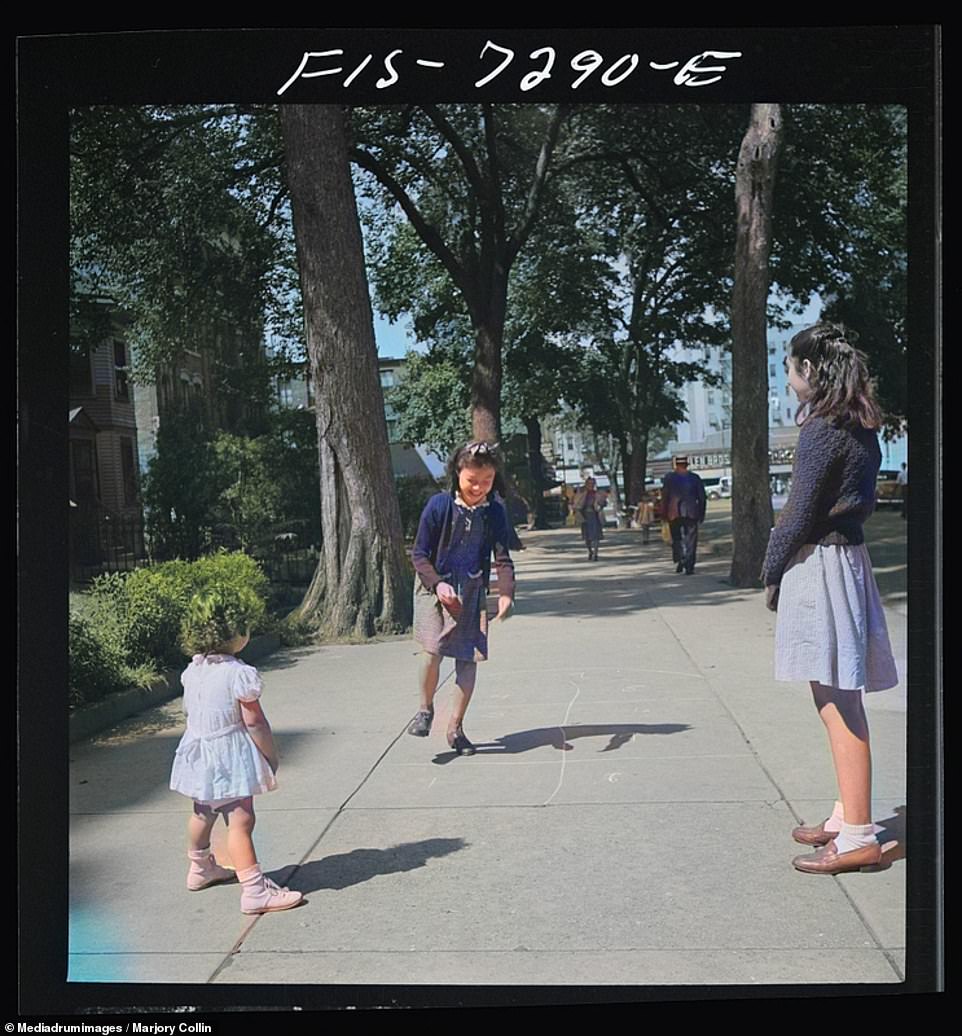 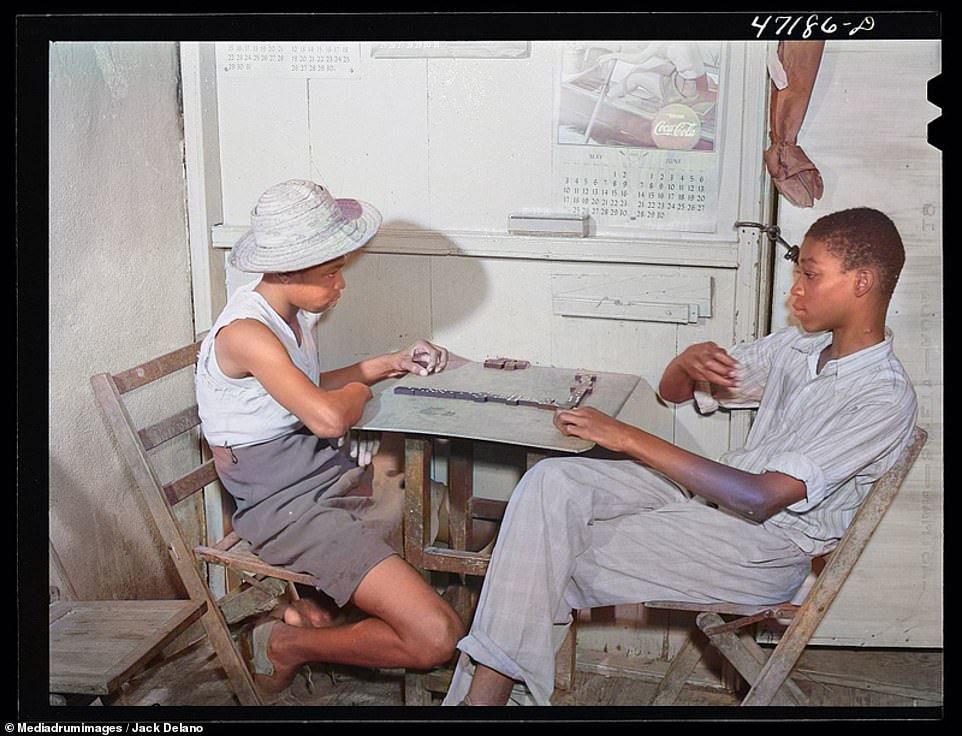 An intense game of dominoes is depicted in this photograph from 1941. Two young boys face off against one another from across a small wooden table inside a candy store in Charlotte Amalie, Saint Thomas Island, Virgin Islands, in 1941. One of the oldest known pastimes, dominoes can trace its origins back to China around 1120 AD, though some in China believe it was invented as early as 181 AD by a hero named Hung Ming as a way of entertaining his soldiers 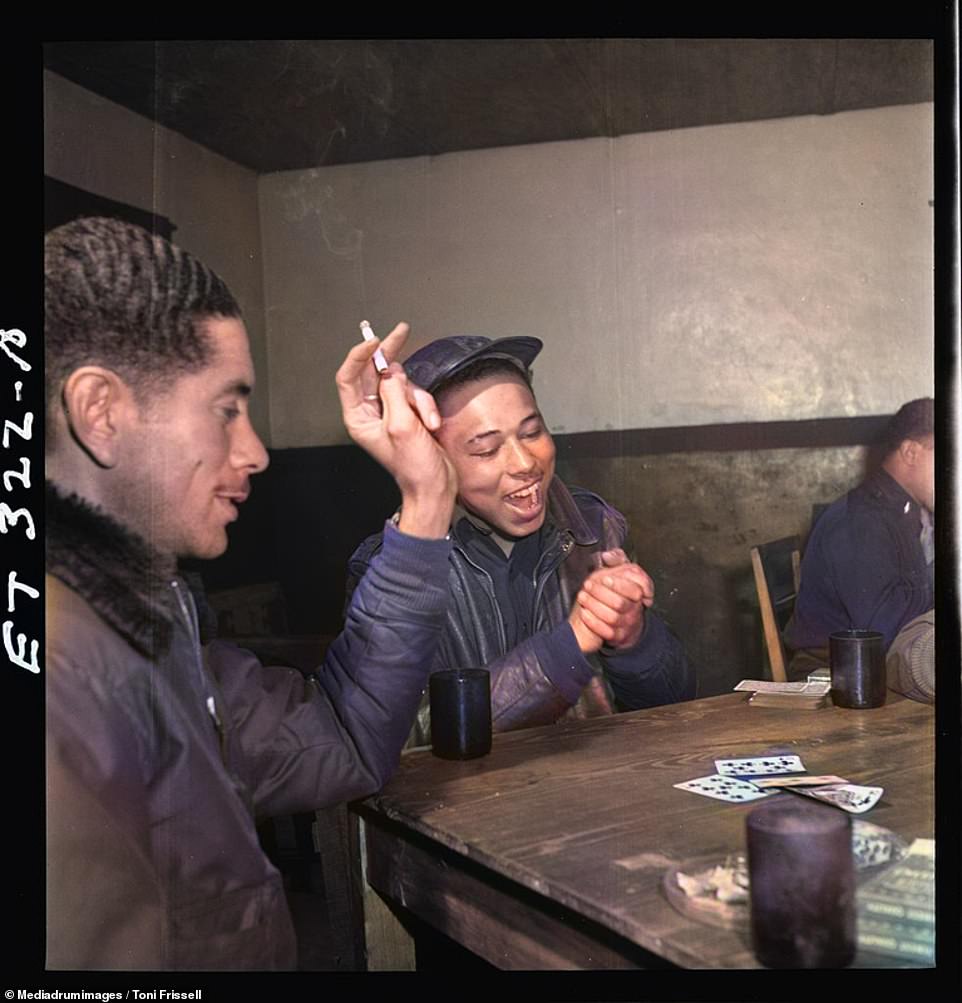 Another card game brings out the joy in these two Tuskegee airmen during an evening inside the officers’ club in 1945. The three most popular card games among male soldiers during the Second World War were Contract Bridge, Poker, and Pinochle, while female military personnel preferred Auction to Poker 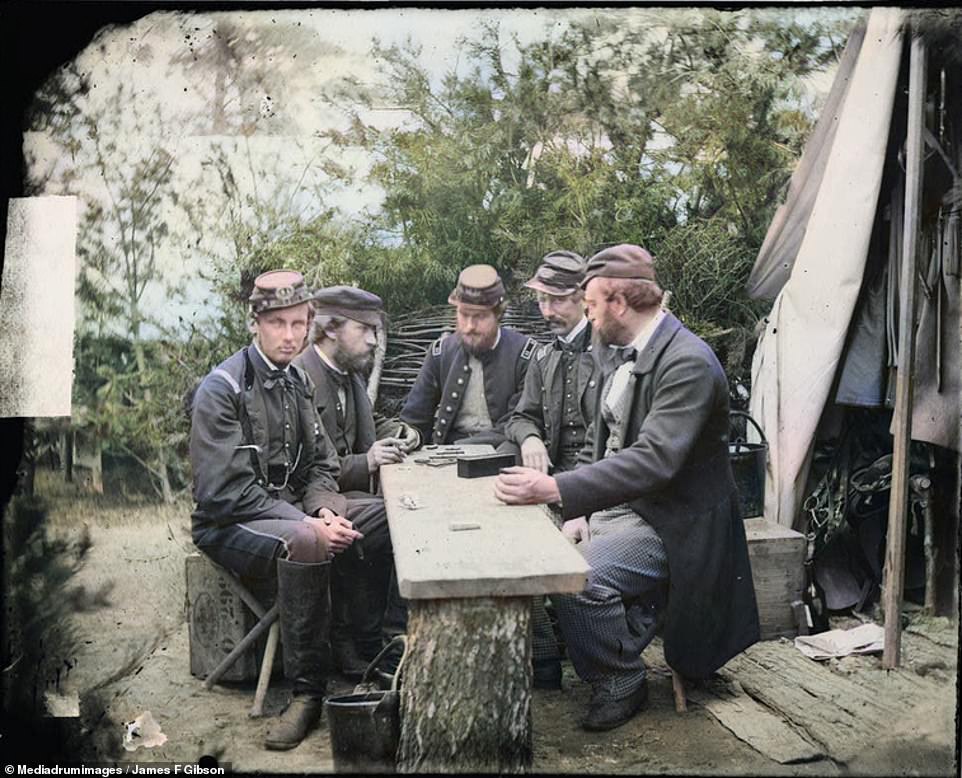 The Duke of Chartres, the Count of Paris and the Price of Joinville sit among a group of soldiers in this colorized picture. The group are concentrating on a game of dominoes at a mess table in Camp Winfield Scott, Yorktown, in 1862. The picture was taken during the American Civil War which raged between the years of 1861 and 1865 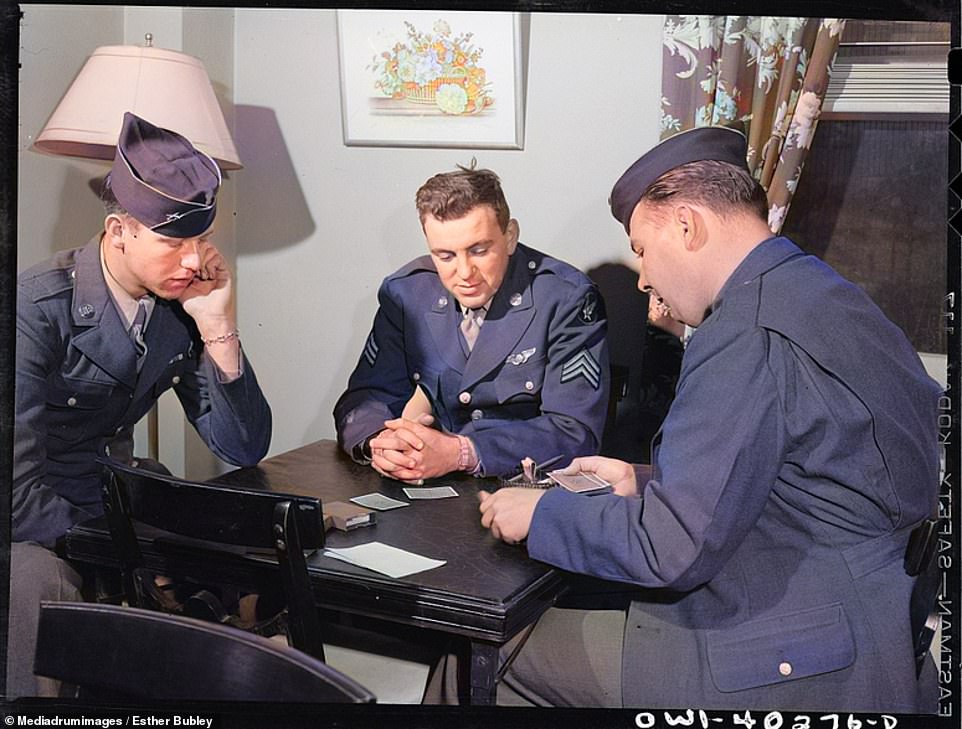 Card games have been used by people to pass the time for hundreds of years. These soldiers waiting between trains at the United Nations service centre in Washington DC in 1943 are seen waiting for a fellow soldier to deal out their hands before a game 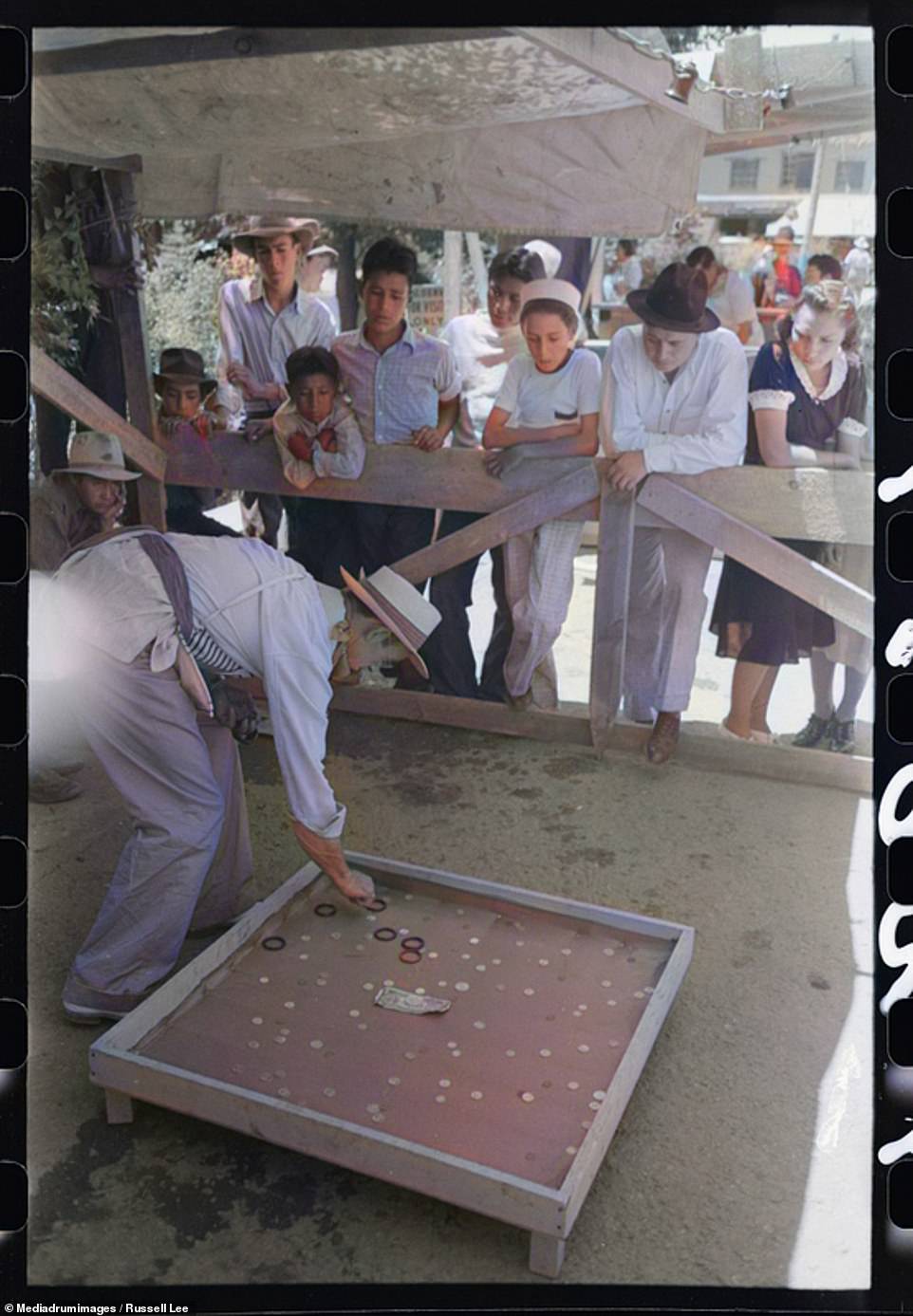 A group of people lean on a wooden fence around a game board during a fiesta in Taos, New Mexico, in 1940. A game of penny-pitching is being played, which involved players taking it in turns to throw pennies at either a wall or a mark. The winner of the game is the person who managed to land one of their pennies closest to the wall or mark 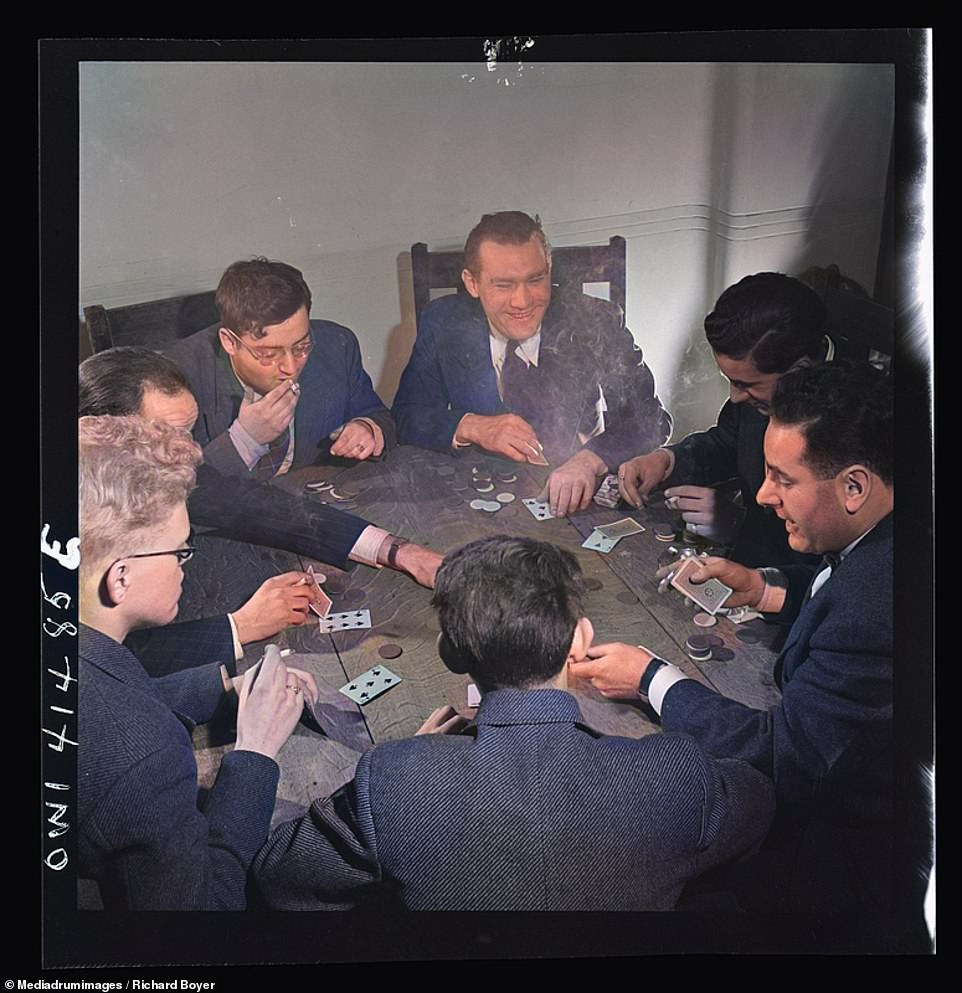 Over the years games and pastimes have evolved and adapted in a number of ways. This photograph from New York City in 1944 shows a group of men sat around a table at an institute for the blind. They are playing a game using a deck of Braille cards so that they can identify each card from the others