Terrifying moment pizza delivery driver, 43, is glassed and battered by four thugs before they steal his car and leave him lying in the street

Footage has emerged showing the horrifying moment a pizza delivery driver was glassed and battered by thugs who made off with his car after leaving him lying in the streets.

Police are now desperately urging any witnesses to come forward, with a lack of leads meaning each of the attackers still remain on the streets.

The innocent victim, 43, was left with two-inch gashes to his face and head from the sickening attack, which took place in a residential street in Murray street, Ancoats, Manchester on January 2 at 12.30am.

In CCTV footage released by Greater Manchester police, the man’s four attackers could be seen initially targeting the pizza delivery driver before chasing him down the cobbled street as desperately attempted to flee.

Unable to evade the chasing pack, the man is grasped, before being pinned up against the wall and met with an avalanche of punches and kicks. 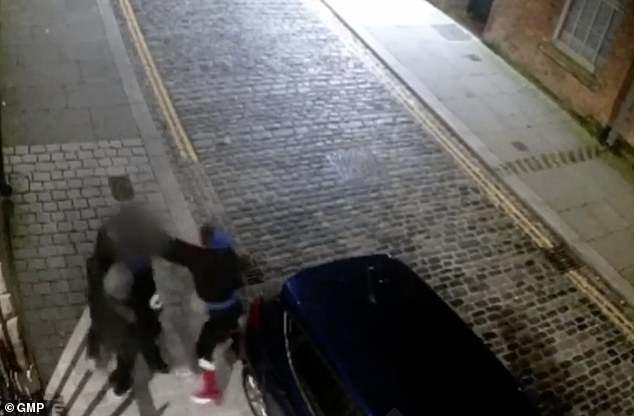 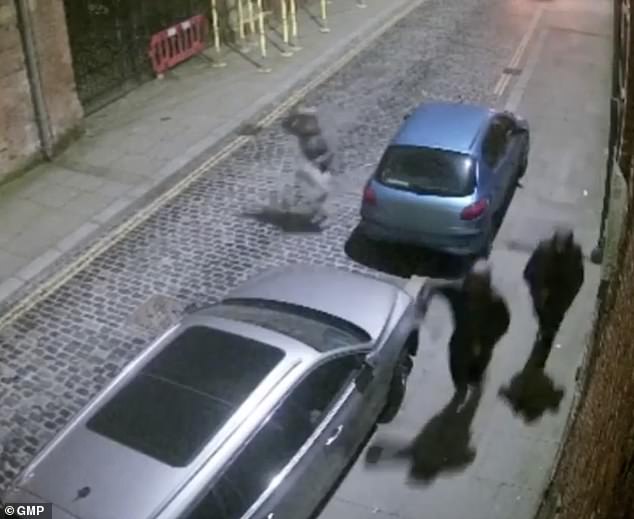 The innocent victim, a 43-year-old man, was seen desperately trying to evade the thugs as they chased him down a cobbled street in Ancoats, Manchester 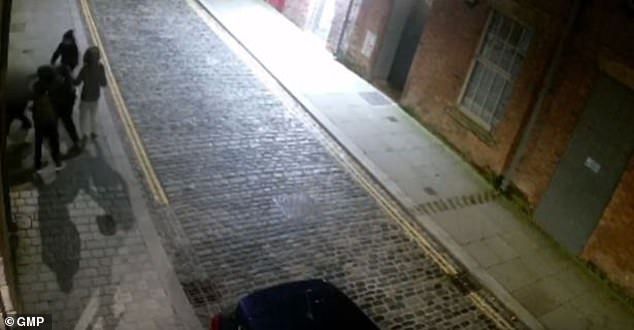 The four attackers were able to corner off the man, before raining down punches and kicks and sending the victim to the floor, where his car keys were then stolen

The hooded crooks are then seen robbing the car keys of the innocent man and leaving him for dead on the ground before making off towards his parked vehicle.

The man was treated in hospital for the cuts and bruising to his shoulder after the assault at 12.30am on January 2.

Police have now launched an appeal to catch the attackers, with no arrests yet made.

Detective Constable Kath Cassidy of Greater Manchester Police, said: ‘This was a terrifying attack on an innocent man who was just doing his job.

‘We understand this incident took place over three months ago but after following every possible line of enquiry our officers have released this CCTV in the hope that someone will be able to help. 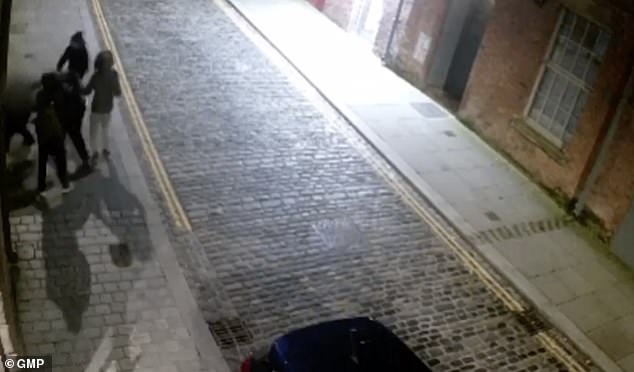 The man could be seen scrambling around on the floor, looking to get away from the line of fire as the thugs showed no signs of easing up on the attack 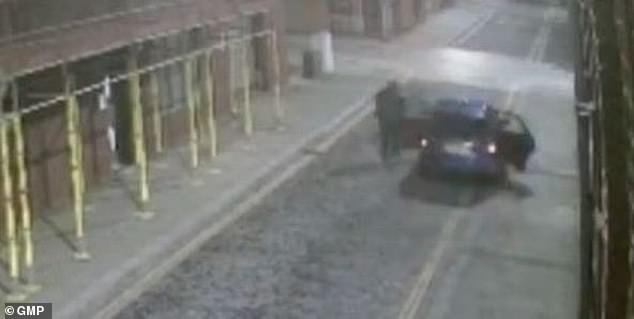 The innocent victim was left with two-inch gashes to his face and head as the four attackers made off with his vehicle in a residential street in Ancoats, Manchester

‘If you have any information or were on or nearby Murray Street in Ancoats at the time of the robbery, please get in contact with police as soon as possible so that we can continue to piece together the events of that night.’

Alternatively, reports can be made to the independent charity Crimestoppers on 0800 555 111.