Victoria Police have fined thousands of drivers over the Easter period, including hundreds for drink-driving and two who allegedly clocked up speeds of about 250km/h.

A crackdown on road safety across the state kicked off on Thursday ahead of the Easter long weekend.

Police said officers detected nearly 8000 offences in the first five days of the operation. More than a third of the fines issued were for speeding, and one in every 326 drivers breath tested was over the limit.

Among the 2948 people caught speeding across the state, some offenders stood out, including a 42-year-old Hallam woman who police say was driving at 251km/h on the Calder Freeway at Woodend – which has a speed limit of 110km/h – about 12.30am on Easter Sunday.

Police allege the woman, who was driving a Volkswagen sedan, was also on her phone at the time.

Officers involved in the hoon-targeting Operation Achilles said they intercepted a Holden VN Commodore travelling on the Tullamarine Freeway at 144km/h – more than 60km/h over the speed limit – on Friday night. 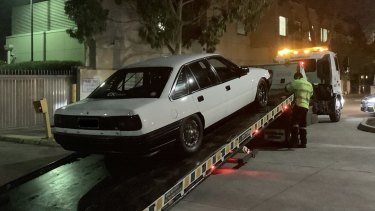 A Holden VN Commodore being impounded by police on the weekend. Credit:Victoria Police

Police said the 32-year-old man driver told them the car had recently reached a speed of 248km/h.

Shortly after, officers said they saw a black Holden travelling at 130km/h with its headlights off along Barry Road in Upfield. Officers from the police air wing said they observed the vehicle travelling at 140km/h in a 60km/h zone.

Police also said they intercepted a Hyundai iLoad van being driven on the wrong side of the Hume Freeway in the early hours of Saturday morning.

More than 300 drink-drivers have been booked since Thursday from nearly 102,000 breath tests, while 579 disqualified and unlicensed drivers were detected and 837 people were fined for driving unregistered vehicles. 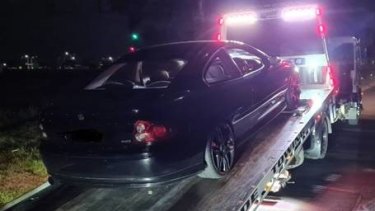 Another 261 people were caught for mobile phone offences, and 243 people were detected driving with drugs in their system from 6615 roadside tests.

“Despite our best efforts, we still sadly saw two lives lost on Victorian roads over the weekend and police caught thousands of motorists engaging in unacceptable behaviour, putting themselves and others at risk,” he said.

“Operation Compass will continue this week, and while police will again [go] all out to reduce road trauma, we are pleading with motorists to please be patient and stay alert when travelling and returning home from holidays”.

Our Breaking News Alert will notify you of significant breaking news when it happens. Get it here.