Prescriptions for ADHD medication double in a decade

Prescriptions for ADHD medications have more than doubled within a decade and scripts for adults now outnumber those for children, as rising numbers of adult women are diagnosed with the disorder.

People seeking treatment for Attention Deficit Hyperactivity Disorder, or ADHD, are facing months- long waiting lists to see a psychiatrist, with some clinicians attributing the increase in adult cases to historical under-diagnosis, particularly in young girls.

The greatest increase was seen in adults on Ritalin, which increased almost three-fold to 160,000 scripts in 2021. The number of adult scripts for dexamphetamine roughly doubled to close to 390,000.

About 24,000 more scripts were issued for adults than for children during the past year. In 2013, children’s scripts outnumbered adult prescriptions by 10,000.

A spokesperson for the Royal Australian and New Zealand College of Psychiatrists, Dr Karuppiah Jagadheesan, said the figures reflected reduced stigma around taking the psychostimulant drugs, and better awareness of ADHD in the community, particularly in adults.

“In the last 10 years, there’s been a lot of awareness so many people are reaching [for] help and getting a diagnosis who didn’t before,” he said. “There is also more openness in the profession to prescribing, with better education programs and awareness about whom medication could benefit.”

An increasing number of adults, particularly women, are being diagnosed with ADHD, a mental health condition characterised by an inability to focus and, for some, hyperactivity. Some psychologists and psychiatrists believe the shift is following under-diagnosis of the condition in young girls, who may not be as disruptive in classrooms as boys with ADHD.

“Not everybody needs medication, even though it has high efficacy,” he said. “There is a proportion of individuals for whom it is better for them to be managing their skills and making lifestyle changes.” 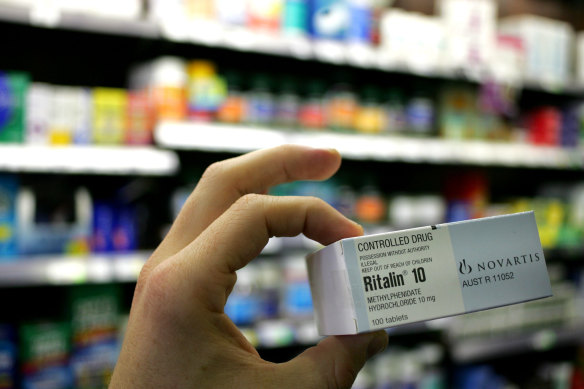 Ritalin is among the medications prescribed to treat ADHD.Credit:Glen McCurtayne

An influential 2018 review published in Lancet Psychiatry found strong evidence for the effectiveness of psychostimulants as treatment for ADHD. However, the available data only allowed for researchers to assess the impact of medication for up to 12 weeks. It concluded methylphenidate should be the preferred drug for children with ADHD while dexamphetamine was preferred for adults. But drug therapy was more effective in children than adults overall.

Prescription rates for ADHD medication have historically been the subject of controversy, such as when the number of Australian children on medication increased nine-fold between 1990 and 2000.

But psychiatrist Dr Roger Paterson, a board member of the Australian ADHD Professionals Association, argued the prescription figures actually indicated psychiatrists were being judicious with issuing scripts and showed most people with the condition were not on any medication.

“The absolute number of people taking stimulant medication increases from year to year, but it is still way under the expected prevalence rates for children and adults,” said Paterson, who has received funding to attend educational conferences from pharmaceutical companies that manufacture ADHD medication.

It is estimated that about one in 20 Australian children have ADHD, and about 2.5 per cent of adults, although not all of these people will have received a diagnosis.

“[It is] correct that we can’t tell by [prescription numbers] alone that there is overuse in ADHD medication. We will also not know whether the medications are actually being used to treat ADHD or are used ‘off-label’,” said Rae Thomas, an associate professor in the Centre for Research in Evidence-Based Practice at Bond University. However, she said there was a “growing body of evidence suggesting ADHD is possibly over-diagnosed”.

A 2021 Australian review of research, published in JAMA Psychiatry and co-authored by Thomas, found “evidence of ADHD overdiagnosis and overtreatment in children and adolescents”, particularly those with milder symptoms, but noted evidence gaps remained, and future research was needed.

Ongoing research by the same team published this year has used data from two age cohorts in the Longitudinal Study of Australian Children to demonstrate that ADHD diagnoses have increased while parents’ reports of ADHD-related behaviours remained relatively stable, also raising questions about overdiagnosis.

Early next month, the first Australian Evidence-Based Clinical Guideline for ADHD will be published by the Australian ADHD Professionals Association, the first endorsed by the federal government’s National Health and Medical Research Council.

It will contain 132 recommendations for the diagnosis, treatment and support of people with ADHD across their lifespan.

A 2019 Deloitte Access Economics report estimated the annual cost of untreated ADHD in Australia at $20 billion, more than half of which was modelled productivity losses.

Jagadheesan said the guidelines could not be coming at a better time. Patients seeking a diagnosis are routinely waiting months to see a psychiatrist, as mental health services are strained by the impact of the pandemic. He is hopeful that a focus on ADHD could lead to a dedicated funding commitment.

“We need better training for other disciplines, not necessarily psychiatrists or paediatricians, so a better assessment process can happen to determine if there is a need for a referral,” he said.