When Pierre Trioli emerged from hotel quarantine in June last year, the second wave of coronavirus had taken hold of Melbourne and his hopes of returning to his job teaching English to international students were dashed.

Luckily, the 32-year-old Carlton resident could immediately go on JobSeeker, which was offered unconditionally to Australians throughout the pandemic. But as the second wave receded and payments dried up, his employment didn’t return. 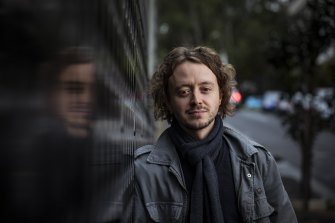 English teacher, Pierre Trioli, 32, who has struggled to find work since the pandemic ravaged the international student industry.Credit:Chris Hopkins

“There were no options for me but getting on JobSeeker,” he said.

Mr Trioli, who holds a masters degree in international relations, said he wasn’t sure who was supposed to benefit from the government’s retraining program considering Australia has record low levels of unemployment.

“I guess from their point of view, giving training courses for people to learn to adapt to the current climate in terms of employment is the way to go, but it’s more easily said than done. Is it realistic in my case to learn a trade?

“It wouldn’t make much sense to me. It seems to me there’s record employment, lower than it ever has been, so who is it that he’s referring to that needs to retrain? Is it people like me, or the long-term unemployed?”

With employers warning of labour shortages while the country’s borders are closed, the government is under pressure to do more to help 244,000 people who have been out of work for at least 12 months, a 26-year high in long-term unemployment.

When COVID-19 hit in March last year, Sydney’s Fortune of War pub owner Steven Speed had to make some tough decisions in order to stay afloat.

The iconic pub’s doors were closed for the foreseeable future, middle management jobs were axed, and its boutique accommodation lost $70,000 in bookings within 10 days.

JobKeeper helped The Rocks precinct business survive 2020, but when it ended in March the pub shut down its accommodation arm.

Steven Speed thinks the government needs to cut red tape for skilled workers who want to come to AustraliaCredit:James Brickwood

Mr Speed said he didn’t want any more handouts from the federal government, but thought more needed to be done to encourage people back into cities struggling without international tourists.

“It’s been horrible here,” he said.

The pub is now facing a skills shortage, struggling to find regular staff to work the 60 per cent of shifts usually filled by backpackers or foreign workers.

While the budget has included measures to allow foreign students to work more than the current maximum of 40 hours if they are employed in hospitality and tourism, Mr Speed said the industry needed workers from overseas.

“We need to somehow get skilled employees over here,” he said.

“I know there was talk about trying to get skilled chefs and managers … and quarantine them funded by industry organisations.

“But what they need to do to be able to do that is for the government to relax visa restrictions and remove some of the red tape.”