Queen thanks Germans who set up memorial to her wartime bodyguard

He spent nine months guarding the young Princess Elizabeth and her sister Margaret before being tragically killed just days before the end of World War Two.

Lieutenant Robin Tudsbery was just 25 when the armoured car he and two comrades were traveling in was blown up by a mine in the German town of Kutenholz 76 years ago today, on April 30, 1945.

The three men are among 14 soldiers killed in the area during the war who have been commemorated on new memorials following a campaign by a group of German citizens.

Thanks to an anonymous donor, the men’s names have been inscribed on four stone slabs which were put up last month in a slimmed-down Covid-safe ceremony.

The memorials were put up after Germans residents, led by amateur researcher Debbie Buelau, uncovered previously unknown details including the exact location of Lieutenant Tudsbery’s death.

Also remembered are five members of the Coldstream Guards who died when their Sherman tank was blown up by a mine – just yards from where Lieutenant Tudsbery was killed.

As a result of her and her fellow residents’ research, Ms Buelau has tracked down relatives of five of the men and hopes that further publicity will alert the rest.

In 2013, the Queen visited a chapel Lieutenant Tudsbery’s parents built in honour of their son in his home city of Edinburgh.

Buckingham Palace confirmed to MailOnline that Ms Buelau’s group wrote to The Queen informing her of the memorial project and received a reply from her private secretary thanking them for their work.

Her Majesty is known to have grown very fond of Lieutenant Tudsbery and even danced with him when he was invited to a party at Buckingham Palace whilst on leave in December 1944 – just three months before his death. 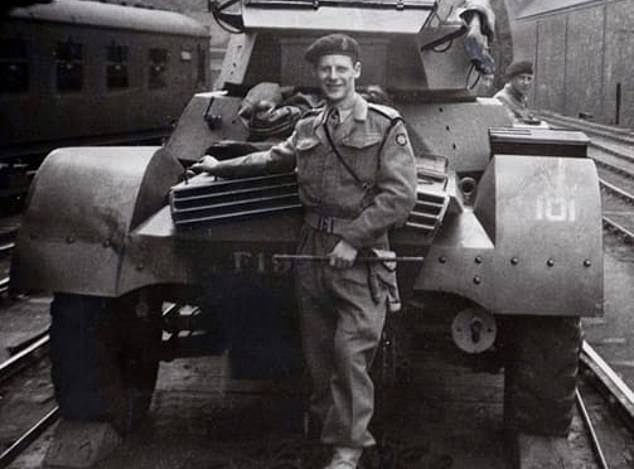 Lieutenant Robin Tudsbery was just 25 when the armoured car he and two comrades were traveling in was blown up by a mine in the German town of Kutenholz 76 years ago today, on April 30, 1945. He is among 14 British soldiers remembered on a new memorial in the town 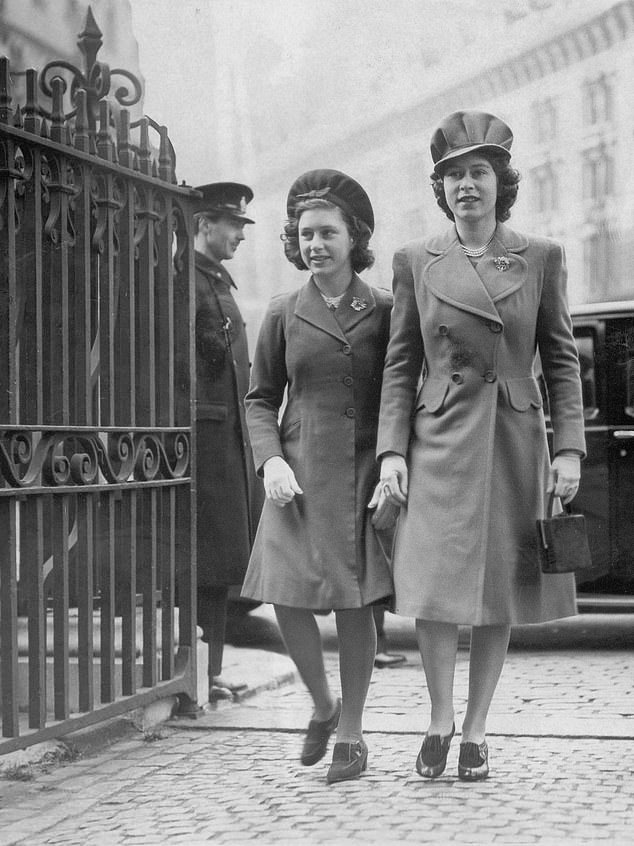 Lieutenant Tudsbery first met Princesses Elizabeth and Margaret, as well as their parents King George VI and the Queen, in 1943 when he was assigned to escort them wherever they went.

He spent nine months guarding the family as they moved between Royal palaces during the Second World War, at a time when the threat against them was considered very serious.

All belonged to the Coldstream Guards

Died on May 1, 1945 while on the way to hospital after being wounded

He was given a pair of engraved cufflinks by the King and Queen when his service with them came to an end.

The princesses also hosted a tea party for him and Elizabeth, who was then just 17, reportedly gave him a cutting from the palace grounds to take back to his garden.

Lieutenant Tudsbery then returned to the Palace for a party in December 1944.

Afterwards, he wrote to his parents to tell them: ‘I danced with both princesses, and they seemed delighted to see me again.’

However, after he had returned to action in Europe, the soldier was killed alongside Troopers James Henry Woodfield, 25, and Donald Cameron, 33, just four days before Germany’s surrender.

A sea mine which had been laid in the street was detonated by German soldiers hiding in a nearby barn as the men drove through Kutenholz.

The trio had been on their way to northern coastal town Cuxhaven – 44 miles away – as part of the British force engaged in final skirmishes with German soldiers amid the collapse of Adolf Hitler’s regime.

Tudsbery’s parents received the telegram from the War Office informing them he had died on May 4, the day Germany surrendered.

On hearing the news, Buckingham Palace sent them a message saying: ‘Their Majesties and the princesses were so distressed to hear of the death of your son, and I am to tell you how much they liked having him here at the [Windsor] castle,’ the Times reported in 2013.

Until the research led by Ms Buelau, who lives in Aspe, near Kutenholz, Lieutenant Tudsbery’s surviving relatives did not know the exact location of their deaths.

After they were blown up, there was initially no time to bury their remains.

Instead, they lay where they died for a week before British soldiers returned to lay them to rest at the roadside.

A day after the trio’s deaths, five British occupants of a Sherman tank were blown up in Kutenholz by another mine, just 700 feet from where their comrades had died.

Ms Bueleau’s team discovered that Guardsmen Green, Moore and Taylor-Hurst were buried in Harsefeld, around eight miles away.

British troops were by then occupying a camp in Harsefeld, which may have been why the men were laid to rest there.

However, due to the massive explosion, no remains of Guardsmen Lock or Somerset were able to be collected. 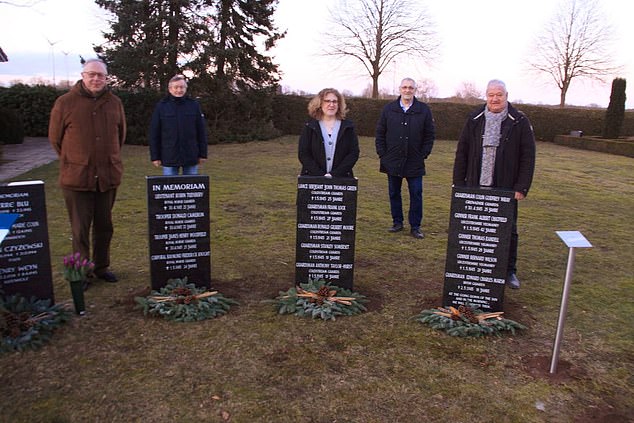 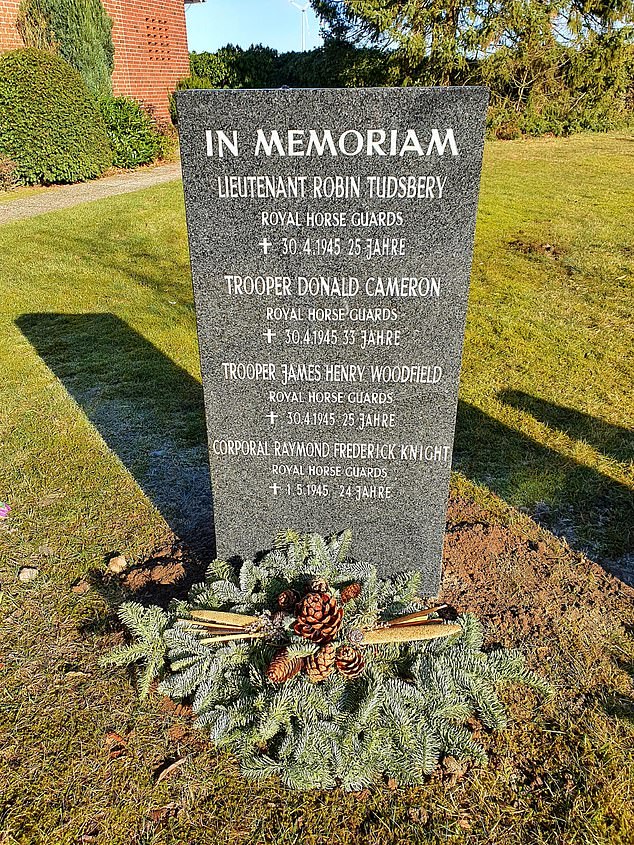 After he had returned to action in Europe, Lieutenant Tudsbery was killed alongside Troopers James Henry Woodfield, 25, and Donald Cameron, 33, just four days before Germany’s surrender. Pictured: The new memorial to the men, in Kutenholz 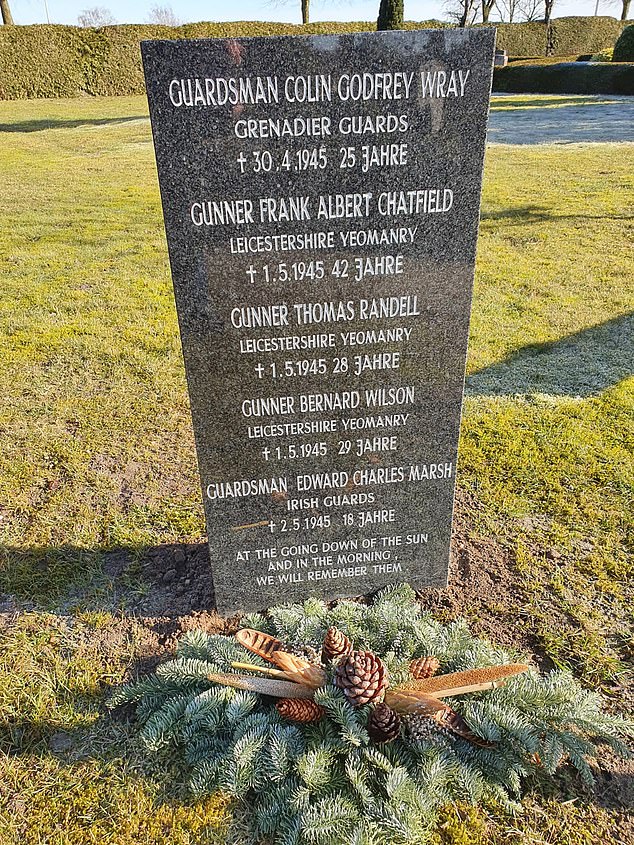 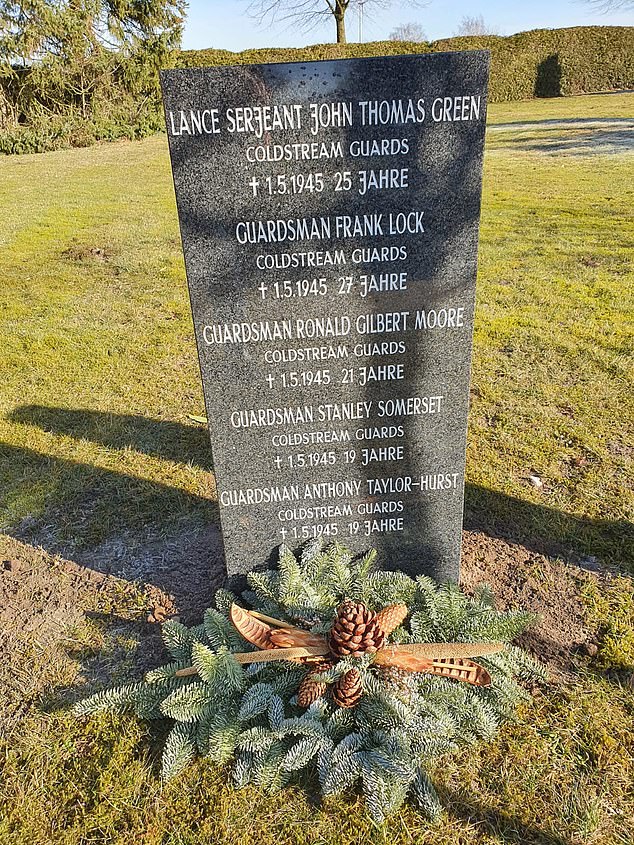 A day after the deaths of Robin Tudsbery and his comrades, five British occupants of a Sherman tank were blown up in Kutenholz by another mine, just 700 feet from the first explosion. The men – Lance Sergeant John Thomas Green, 25; and Guardsmen Ronald Gilbert Moore, 21; Anthony Taylor-Hurst, 19; Stanley Somerset, 19; and Frank Lock, 27 – all belonged to the Coldstream Guards. Pictured: They have been remembered on the new memorial 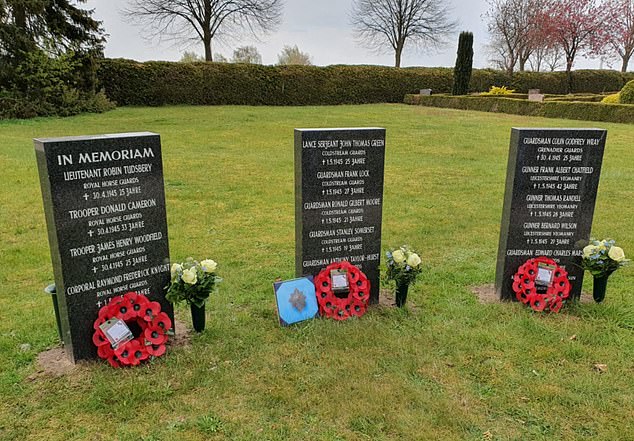 Today Ms Buelau and her team returned to the memorials to lay wreaths sent by John Lamb, the nephew of Guardsman Lock 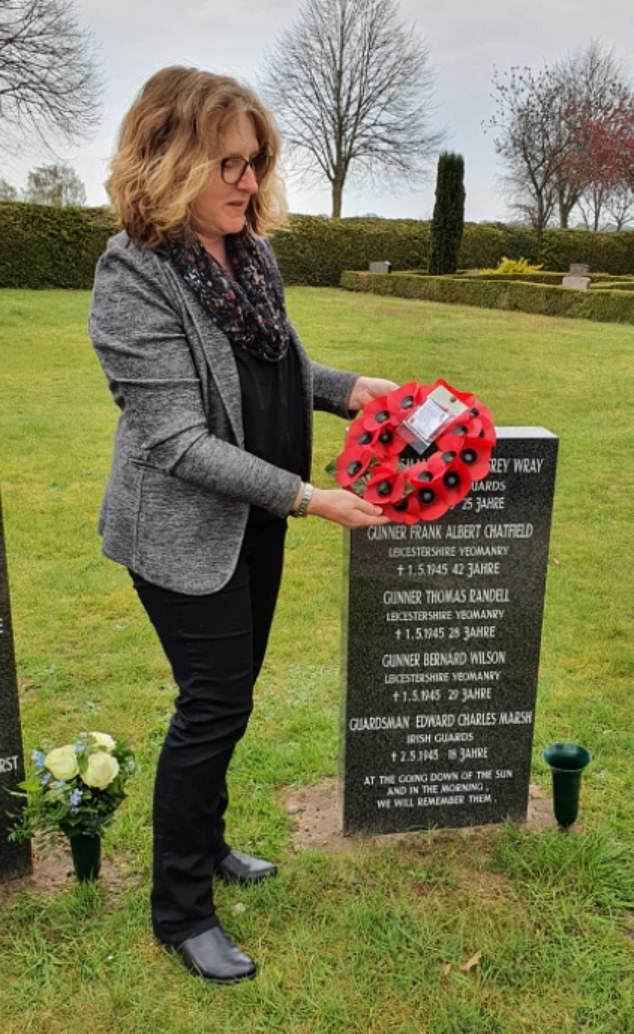 Incredibly, Ms Buelau and co-researchers also used wartime archives to discover the names of six other men who died in or near Kutenholz, and have also tracked down surviving relatives of some of the men.

The team found out that Gunners Frank Albert Chatfield, aged 42; Thomas Randell, aged 28; and Bernard Wilson, aged 29, died in combat in Bevern, around 8miles north-east of Kutenholz, on May 1, 1945.

Along with Guardsman Edward Charles Marsh, who died on May 2, 1945, aged 18, the men were initially buried in a farmer’s orchard in Kutenholz.

Ms Buelau also found out that Guardsman Colin Godfrey Wray, of the Grenadier Guards, died on April 30, 1945 at the age of 25.

Corporal Raymond Frederick Knight, who died on May 1, 1945, aged 24 while on the way to hospital in Kutenholz after being wounded, was first buried in Essel, south of Kutenholz. 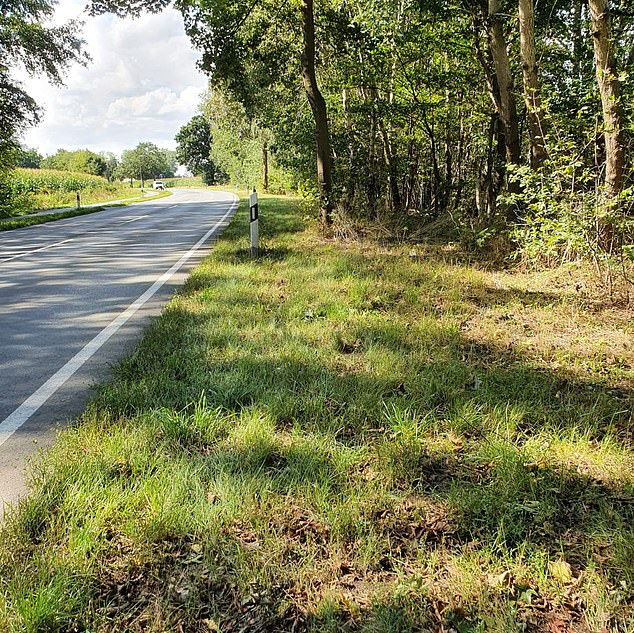 Lieutenant Tudsbery and Troopers Woodfield and Cameron died after a sea mine which had been laid in the street was detonated by German soldiers hiding in a nearby barn as the men drove through Kutenholz. Pictured: The spot where the men’s armoured car was blown up 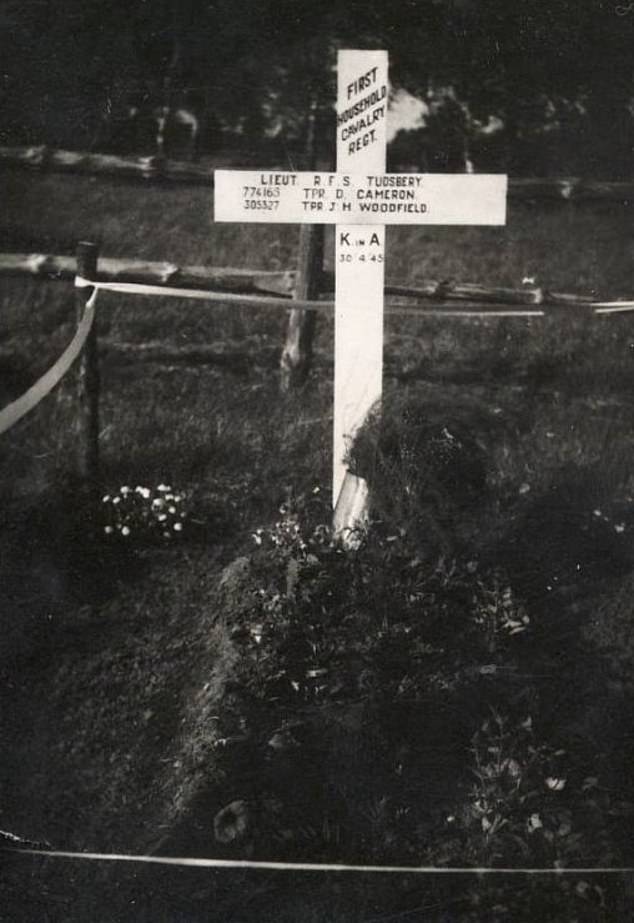 After they were blown up, there was initially no time to bury their remains. However, British troops returned a week later to bury them near where they died. Pictured: The original grave 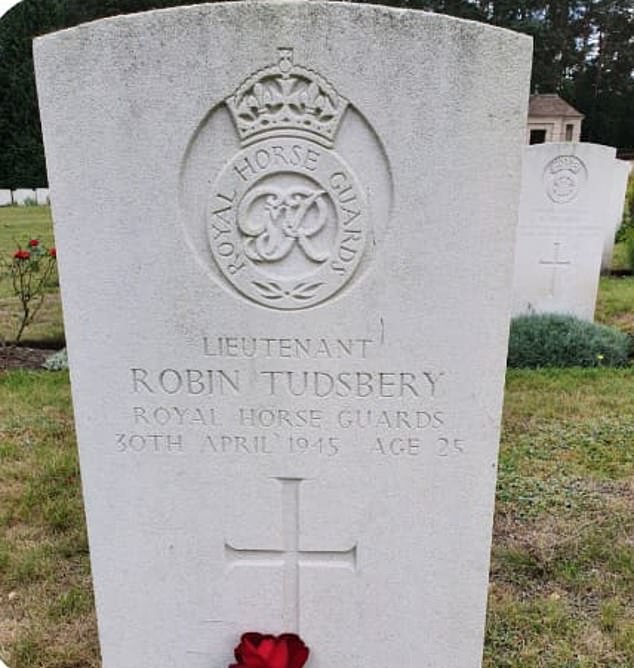 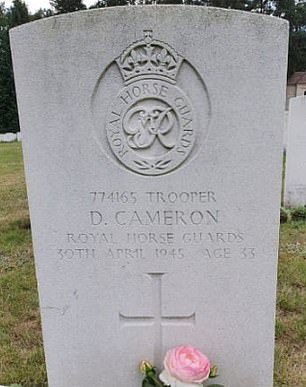 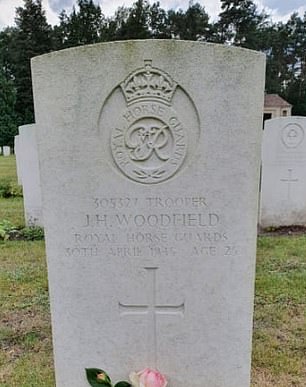 All of these further six Britons were re-buried in Becklingen cemetery in August 1947.

In early March, the hard work of Ms Buelau and her co-researchers in uncovering the tranche of names and further detail about Lieutenant Tudsbery and his comrades’ initial burial place was rewarded.

Four stone slabs inscribed with the names of the 14 men were put up in a small ceremony in Kutenholz.

Today Ms Buelau and her team returned to the memorials to lay wreaths sent by John Lamb, the nephew of Guardsman Lock.

Ms Buelau told MailOnline: ‘I was feeling that these British soldiers should be remembered. They should not be anonymous anymore. They should get their names back.

‘People should know that they died here. All of them were brothers, husbands, sons. They should get their personality back.

‘They were humans who cried like everybody does, they shouldn’t be forgotten.

The 50-year-old mother-of-two, who works as a volunteer at the former prisoner of war camp Stalag X-B, said: ‘We didn’t think that we would find so many British soldiers. 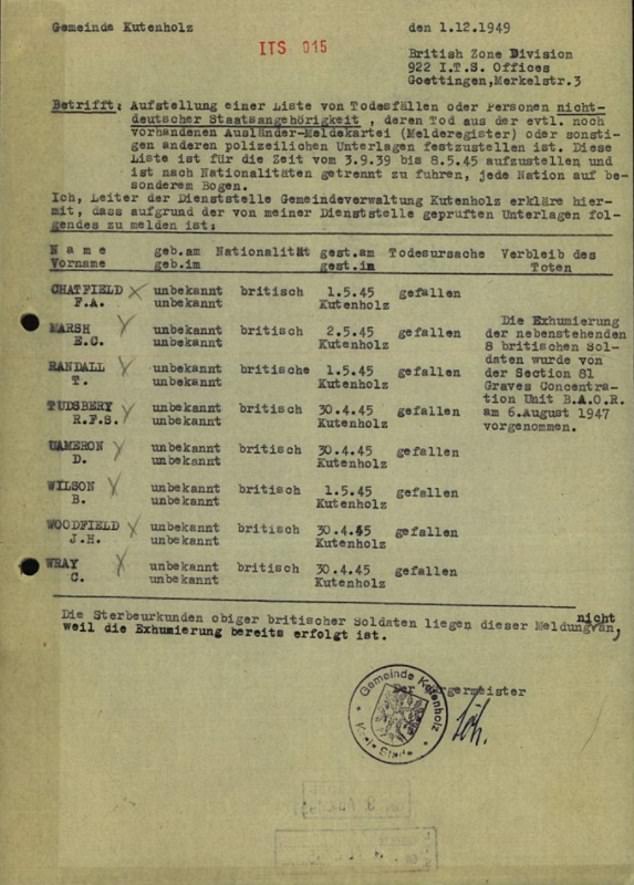 Ms Buelau said that she and her team thought it would be a ‘nice idea’ to write to the Queen to inform her about the memorial to Lieutenant Tudsbery.

She said: ‘We got a letter back from her private secretary, who wrote that the Queen was very interested to hear about our memorial project and that so many people got involved in it.’

After Lieutenant Tudsbery’s death, his parents – Sir Francis and Lady Tudsbery – built a chapel named after their only son.

The Robin Chapel sits in the grounds of the Thistle Foundation, a housing complex for disabled veterans which was also built by the couple.

The chapel’s foundation stone was laid by the then Princess Elizabeth, who was accompanied by her sister Princess Margaret, in September 1950.

After her daughter had become the monarch, the Queen Mother went back to the chapel when it was officially named.

The Trustees of the chapel, who include a surviving relative of Lieutenant Tudsbery, said: ‘The Trustees… are deeply touched that in these days of continuing peace and harmony in Europe there are those who are actively striving to make fitting Memorials to those like Lieutenant Robin Tudsbery and his comrades and to others who died in wartime in their community.

‘We are particularly grateful to the anonymous donor who is making specific provision for further remembrance of Robin and others.

‘This is a superb example of the universal desire for peace and harmony which has come at a cost to so many.’

Ms Buelau has since traced the relatives of several other of the newly remembered soldiers.

Guardsman Lock’s nephew, Mr Lamb, wrote to Ms Buelau to say that her research was the ‘final answer to my 66 years of searching books and records.’ 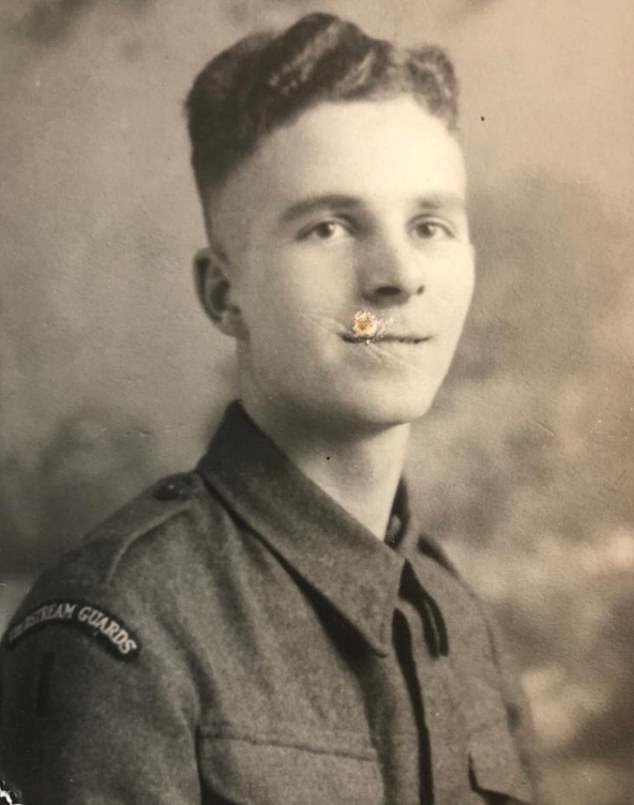 Lance Sergeant John Thomas Green is one of the men who can be pictured after Ms Buelau tracked down his grandson, Christopher

Thanking Ms Buelau, he added: ‘The reason I did this research was a promise I made to Frank’s widow Veronica [my aunt].

‘I would visit his final resting place and because Frank and Stanley Somerset were vaporized and have no graves I am confident their souls would have gone to their maker but their spirits remain at Kutenholz.’

Ms Buelau’s team have also been able to reach the families of Guardsman Marsh, Gunner Wilson and Lance Sergeant Green.

Ms Buelau has so far tracked down relatives of five of the men and hopes that further publicity will alert those of the other six to the new memorials.

In 2013, the Queen returned to the Robin Chapel for a service to commemorate her former bodyguard.