Researchers find list of 12,000 Nazis who lived in Argentina during the 1930s including many who hid money in Swiss bank accounts after looting it from Jews

Researchers have discovered a list of 12,000 Nazis who lived in Argentina in the 1930s including many who hid stolen money in Swiss bank accounts.

The long-forgotten list was found in a store room at a former Nazi headquarters in Buenos Aires and handed to the Nazi-hunting Simon Wiesenthal Centre.

The centre said it believed that the ‘long-dormant’ bank accounts could still hold funds which were looted from Jewish victims under Nazi rule.

Although Argentina is better known as a refuge for exiled Nazis after World War II, many also lived there in the 1930s while a pro-Nazi military regime was in power. 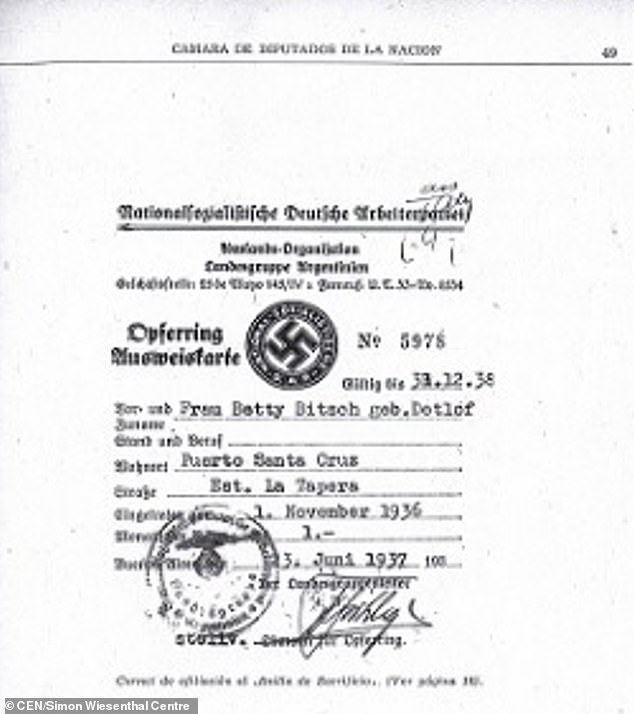 Researchers have discovered a list of 12,000 Nazis who lived in Argentina in the 1930s including many who hid stolen money in Swiss bank accounts

The list of Nazis was drawn up in the 1930s and seized by an anti-Nazi administration which took power in 1938.

Many such records were burned when another pro-Nazi regime took power in 1943.

However, the surviving list was discovered by Argentine investigator Pedro Filipuzzi and handed to directors at the Wiesenthal Centre.

Many of the Nazis on the list held funds that were sent to a bank called Schweizerische Kreditanstalt, now known as Credit Suisse.

‘We believe very probable that these dormant accounts hold monies looted from Jewish victims, under the Nuremberg Aryanization laws of the 1930s,’ the Wiesenthal Centre said in a letter to Credit Suisse.

‘We are aware that you already have claimants as alleged heirs of Nazis in the list.’

The Centre has requested access to the Credit Suisse archives ‘to settle this matter on behalf of the diminishing number of Holocaust survivors’.

Credit Suisse told Swiss media it was willing to ‘look into this affair again’.

The bank also pointed out that it had co-operated with a 1997-99 inquiry into Swiss accounts that had been dormant since World War II.

The military regime of President Jose Felix Uriburu, who was nicknamed ‘Von Pepe’, and his successor Agustin Pedro Justo, welcomed a growing Nazi presence in Argentina during their time in office. 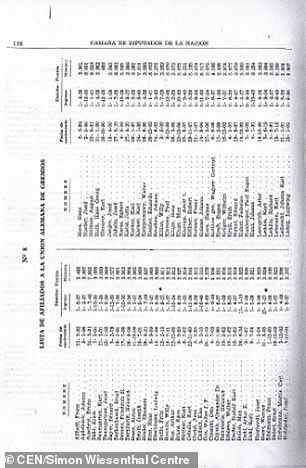 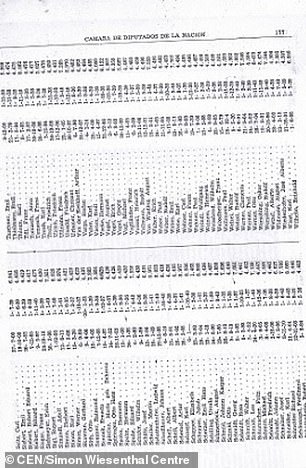 According to investigators, there were around 1,400 official Nazi party members based in Argentina during the 1930s.

In addition, there were 12,000 members of a German-speaking trade union body which served as a front for the Nazis.

On top of that, there were 8,000 more people affiliated to companies with Nazi links, such as the chemical company which supplied Zyklon B to Hitler’s gas chambers.

‘Many of the names listed were related to pro-Nazi companies blacklisted by the US and UK during World War Two,’ investigators say.

The list was seized by the Special Commission to Research Anti-Argentine Activities which investigated Nazi links after the pro-Hitler regime fell in 1938.

But the Commission was disbanded after another coup in 1943 and many of its findings were destroyed.

Many Nazis subsequently fled to Argentina to escape justice in 1945 after the Third Reich was defeated in World War II.

They included notorious figures such as Adolf Eichmann, one of the architects of the Holocaust.

He lived under a pseudonym until he was captured by Israeli intelligence agents in Buenos Aires in 1960. He was later executed.

The infamous doctor Josef Mengele, who carried out genetic research on humans, also lived for some years in the city.