Russia used bombs and gunfire in “warning shots” against a British Navy destroyer in the Black Sea, the Defence Ministry in Moscow said on Wednesday.

A Su-24 aircraft dropped four bombs in waters near the Royal Navy destroyer HMS Defender and a border patrol ship fired its gun to divert it after the British vessel entered Russia’s territorial waters off Crimea and refused to heed radio warnings, the ministry said, according to the Interfax news service. 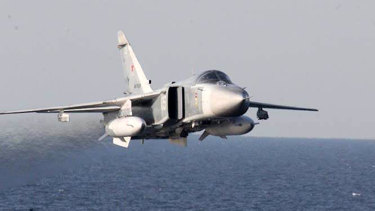 Russia alleged the ship was three kilometres into its waters near Cape Fiolent, south of its naval base in Sevastopol, when the incident occurred around noon local time. The Defender reversed course and left Russian waters within four minutes of the bombing, the ministry said.

The UK government didn’t immediately respond to a request for comment.

The UK and its allies don’t recognise Crimea as Russian territory after Moscow annexed the region from Ukraine in 2014.

Since then, Russia has deployed its planes and ships when the North Atlantic Treaty Organisation has sent ships into the area. At the height of tensions in early 2014, the US accused Russia of flying a warplane dangerously close to a US warship, an allegation Moscow denied.

The Defender on Tuesday left the Ukrainian port of Odessa, where officials signed agreements implementing the UK’s program to help Ukraine build up its navy, according to the ship’s Twitter account. Reached last October, the deal includes refurbishment of existing ships and delivery of new ones.