Satellite images reveal impact of coronavirus outbreak from above

The impact of coronavirus, as seen from space: Satellite images reveal the effects the disease has had – from empty theme parks to deserted streets

This series of satellite images shows the impact of the coronavirus outbreak from above, with roads empty, pilgrimage sites deserted and new hospitals springing up in China.

One images shows only a handful of pilgrims circling the granite Kaaba at Mecca’s Grand Mosque – a sacred site usually thronged with Muslim worshippers – after Saudi Arabia suspended the year-round ‘umrah’ pilgrimage.

An image above the Hazrat Masumeh Shrine in Qom shows one of Iran’s most hallowed places virtually empty, after the country became the centre of the virus outbreak in the Middle East.

Elsewhere, Beijing’s Tiananmen Square has only a handful of cars passing by, while tourists are largely absent from outside Milan’s Duomo and a plaza at Tokyo Disneyland after both were closed over virus fears.

Photos above Wuhan, China – where the outbreak began – show dozens of trains parked at the city’s deserted Dongdamen Station, with roads also empty after the city was virtually cut off from the outside world.

The images in Wuhan also show the sites where brand new hospitals were hurriedly constructed to deal with the huge numbers of virus patients. 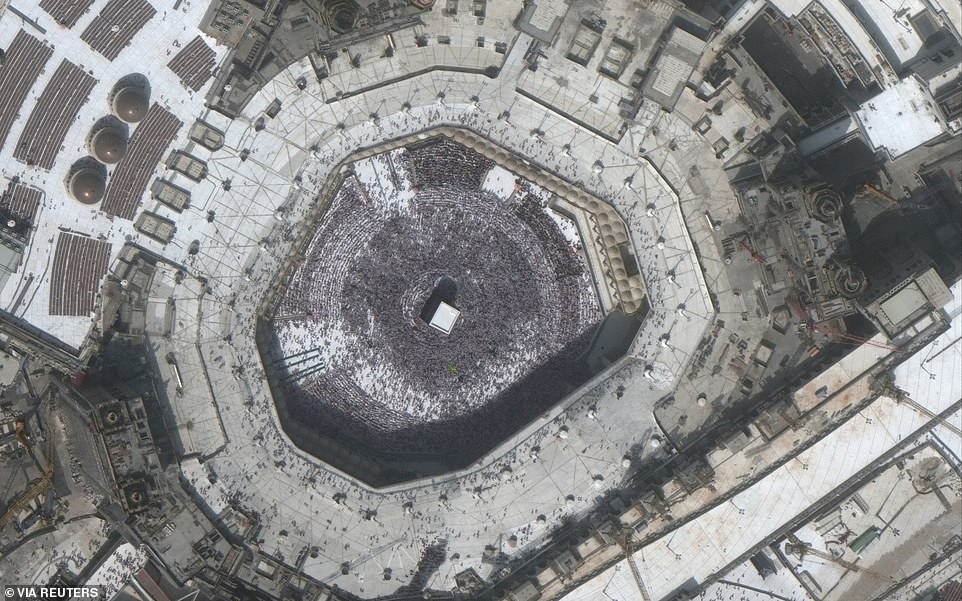 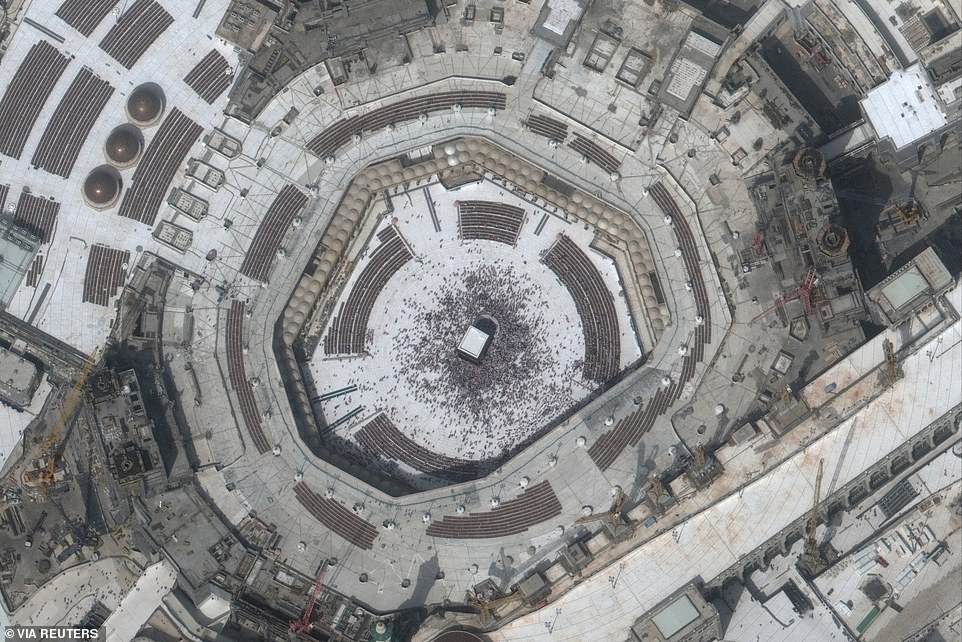 GRAND MOSQUE, MECCA: The holiest site in Islam is packed with pilgrims in the top picture on February 14, before the virus had spread to the Middle East, and much more sparsely populated in the bottom picture on March 3 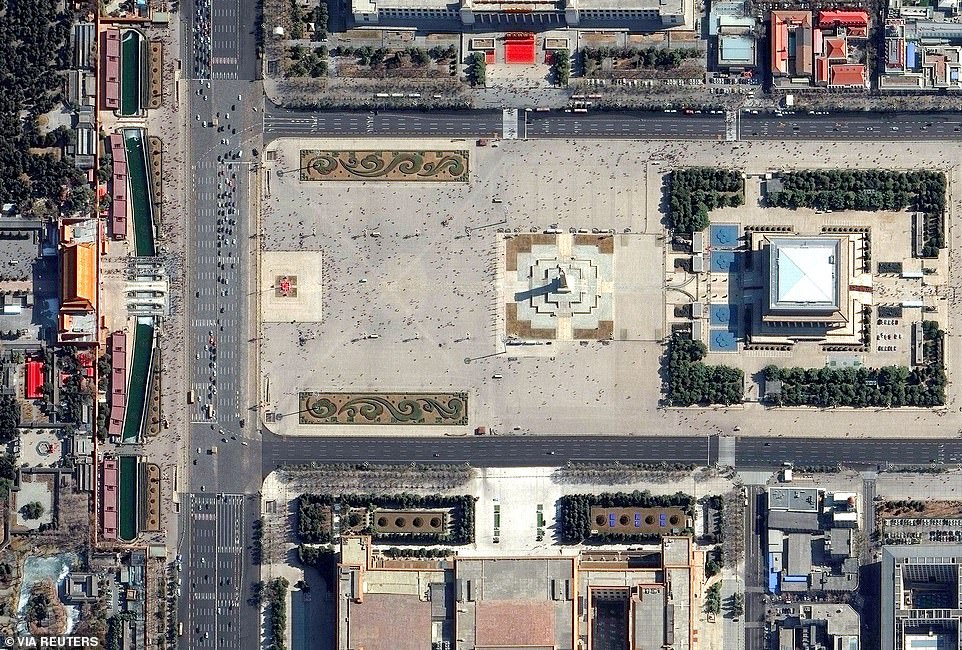 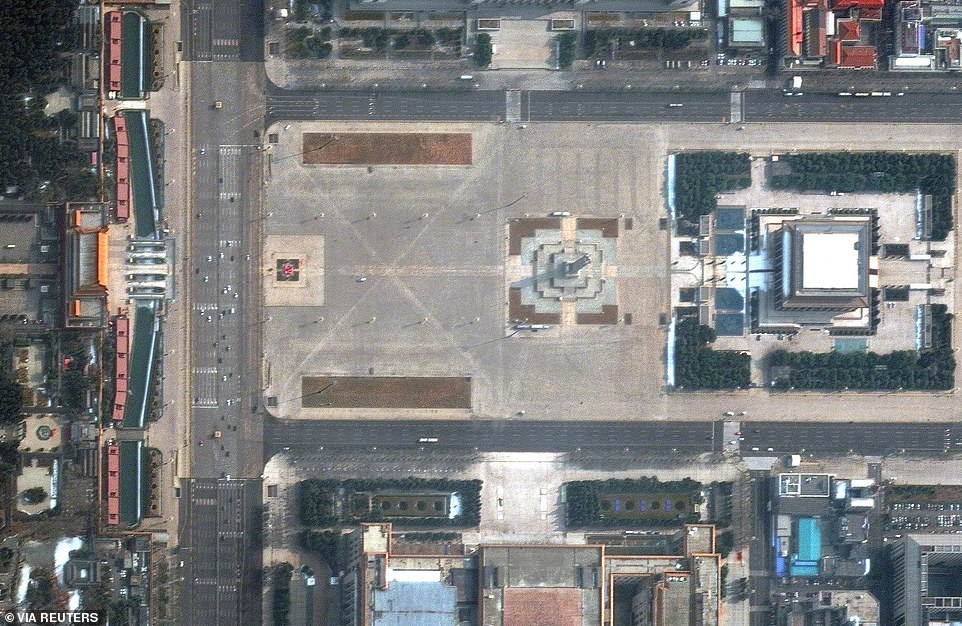 TIANANMEN SQUARE, BEIJING: A healthy crowd of people were milling around the Chinese capital’s emblematic plaza on February 21 last year (top image), but on February 11 this year the square was almost deserted 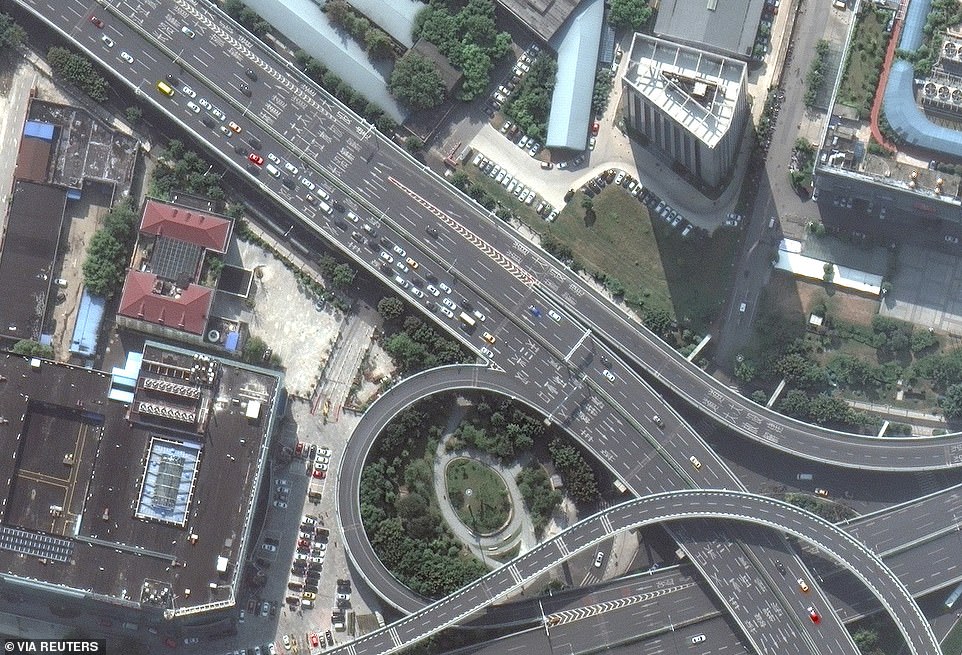 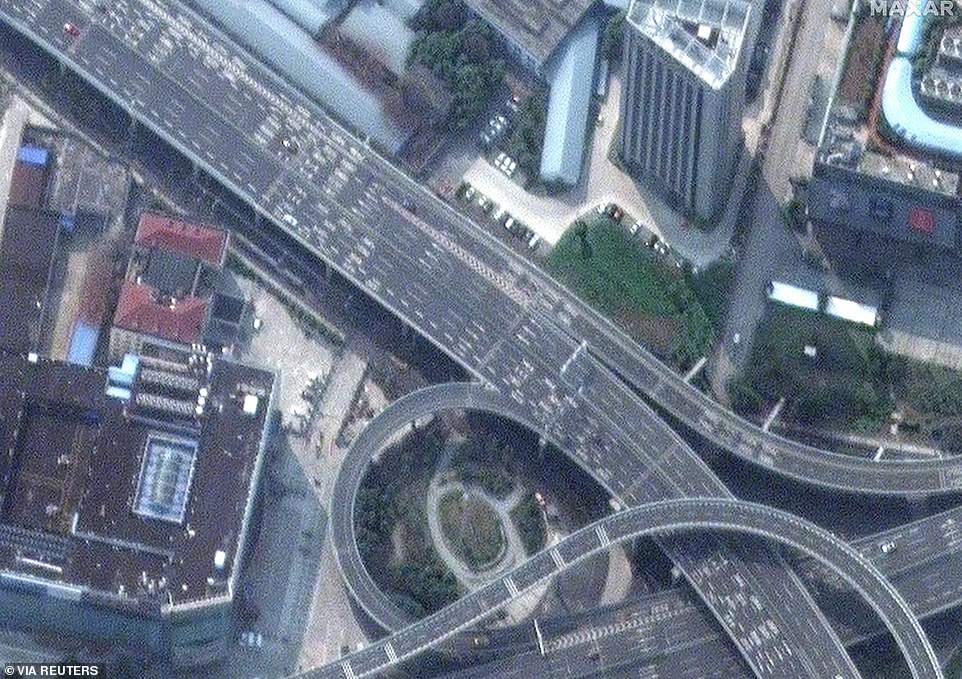 WUHAN, CHINA: A highway in the city at the centre of the coronavirus outbreak is full of vehicles in the top picture on October 17 last year, and nearly deserted on February 25 this year after the city was sealed off in quarantine 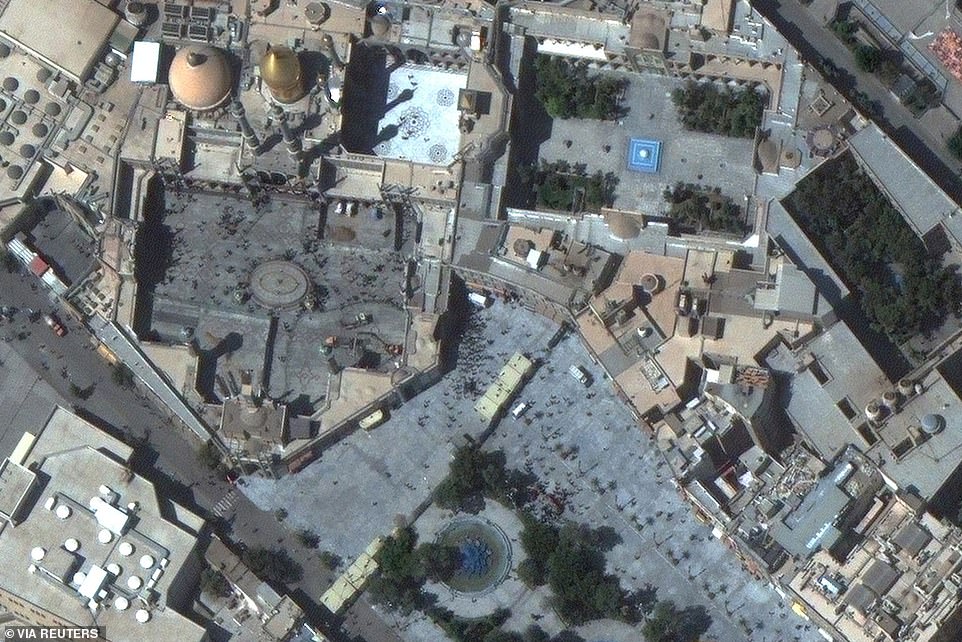 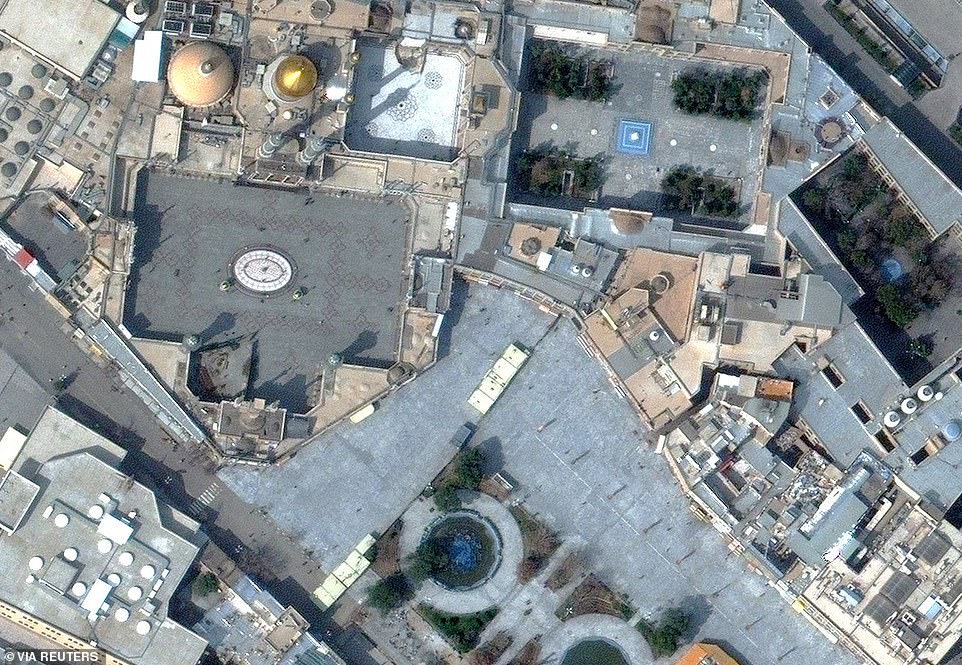 QOM, IRAN: The Hazrat Masumeh Shrine in the Shi’ite holy city of Qom is far emptier on March 1 (bottom image) than it had been on September 25 (top image). Iran has one of the world’s worst outbreaks and pilgrims have spread the virus around the Middle East, with the Iranian regime criticised for refusing to shut down holy sites 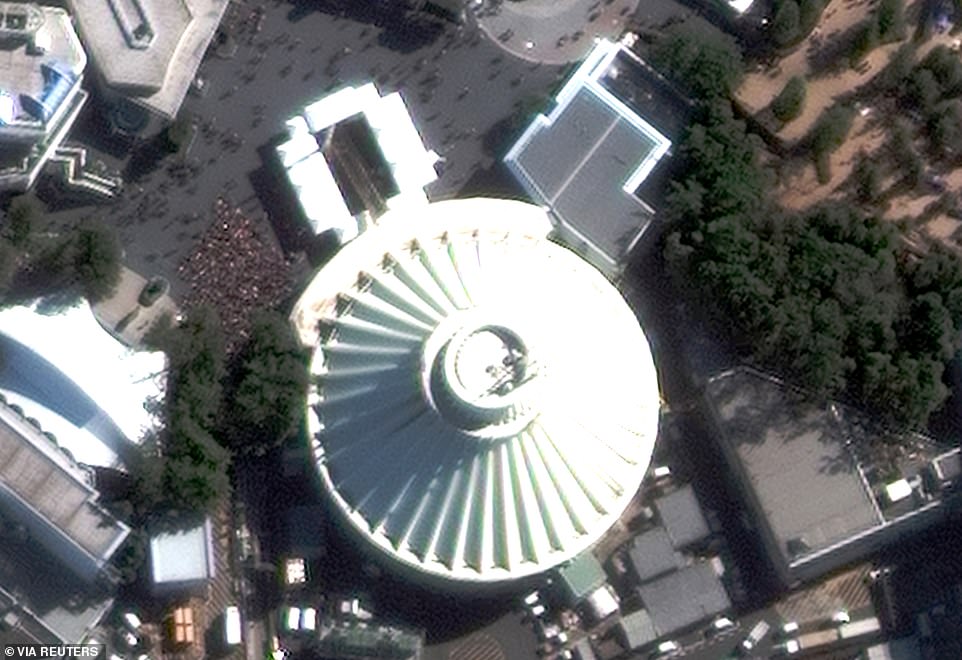 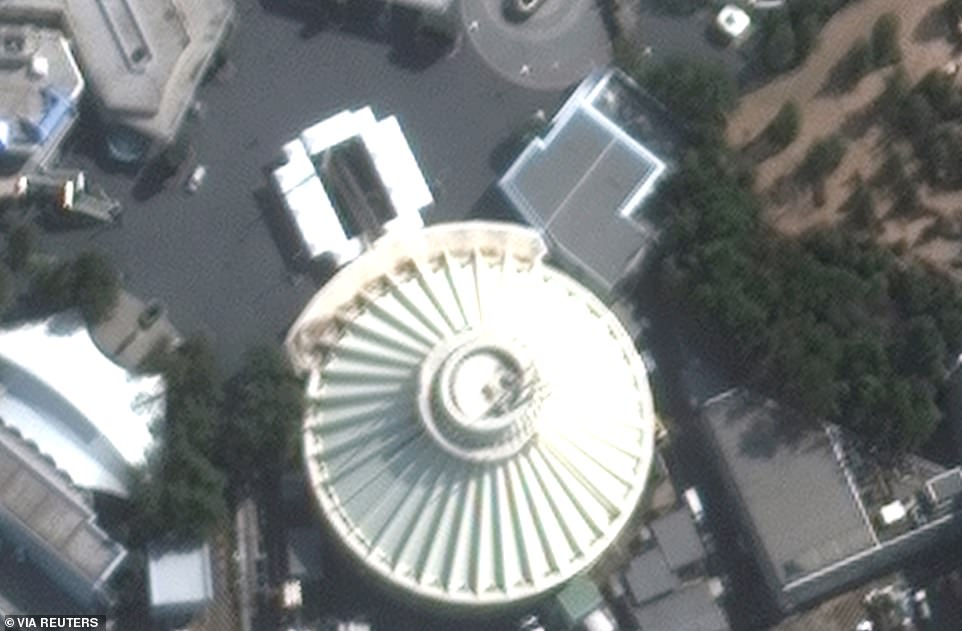 DISNEYLAND TOKYO: The theme park in Japan has been closed because of the virus outbreak, with an empty plaza near the Space Mountain ride on March 1 (below). Tourists had been visiting the park just weeks earlier on February 1, top image 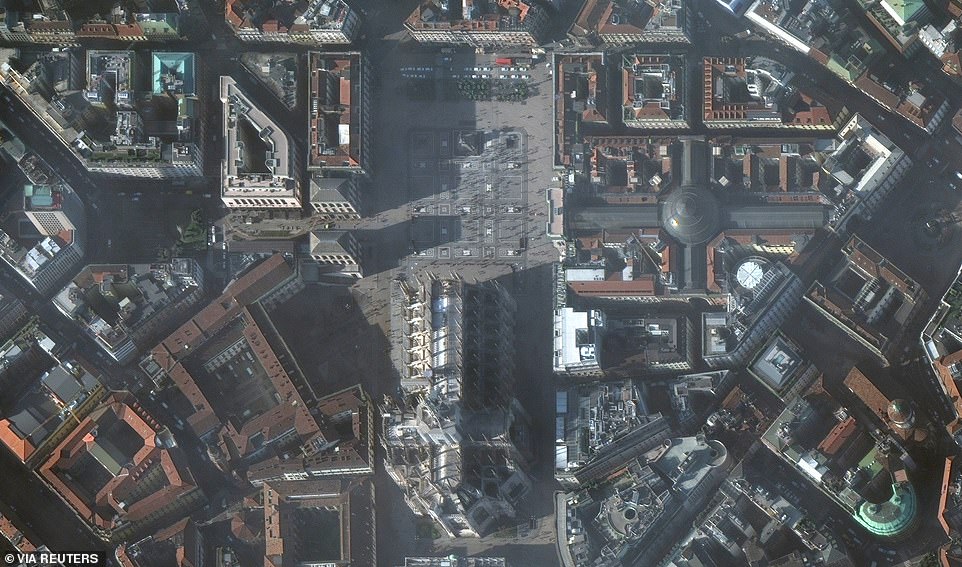 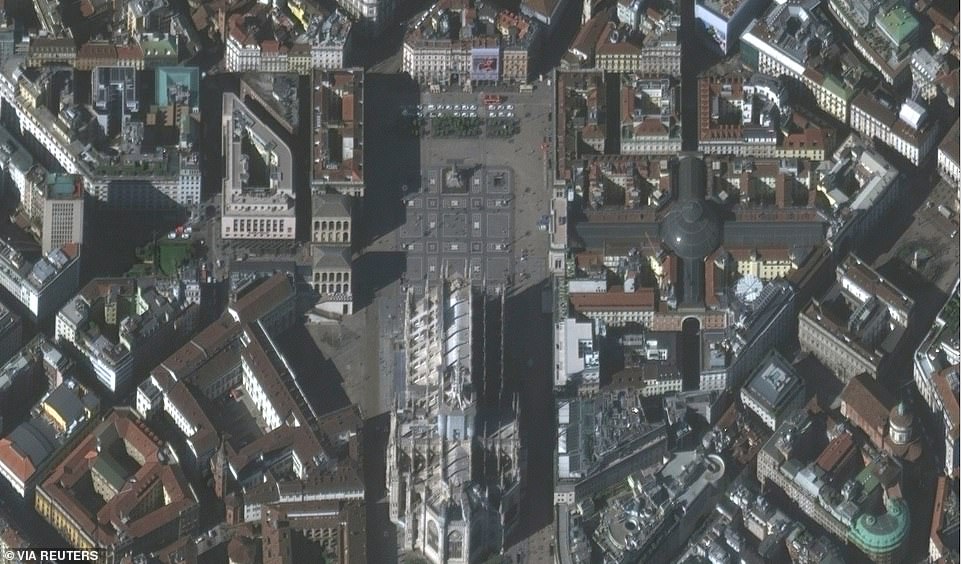 MILAN, ITALY: Crowds are much smaller on March 4 (below) than on January 22 (above) outside Milan’s Duomo cathedral, which was closed to visitors after northern Italy became the centre of the worst coronavirus outbreak in Europe so far 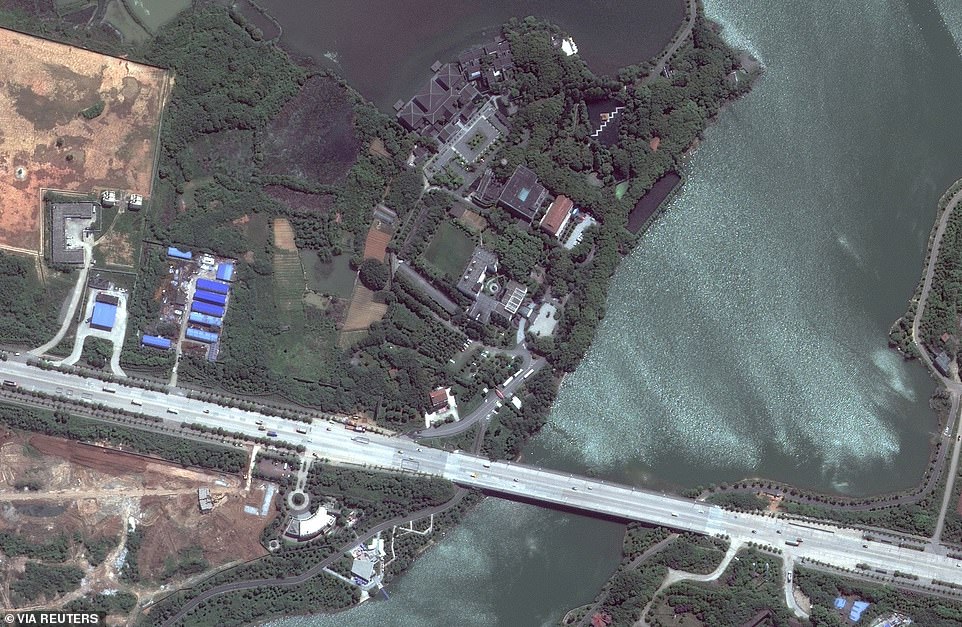 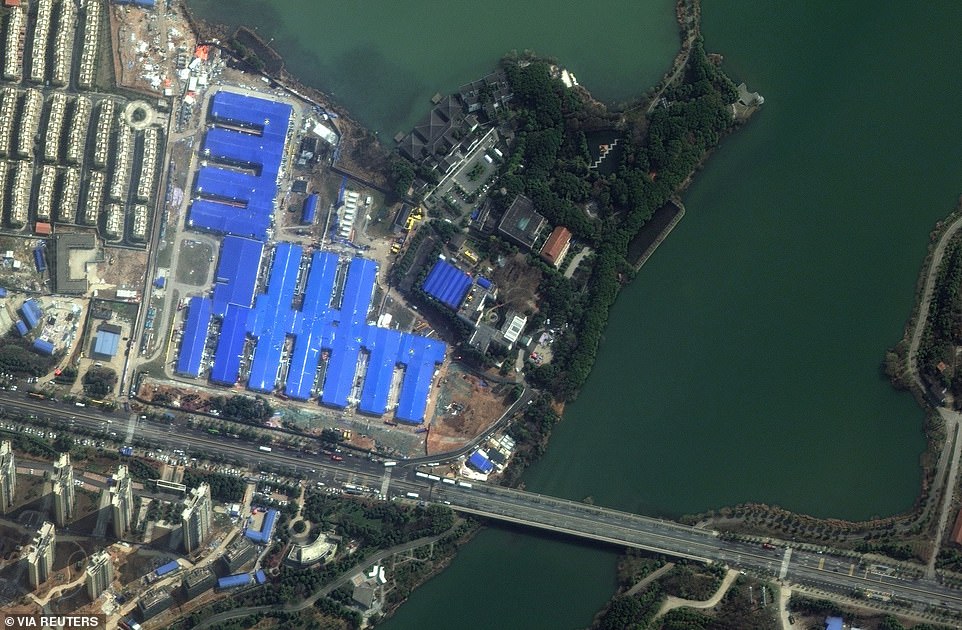 WUHAN, CHINA: These images show the location where the Huoshenshan hospital was hurriedly constructed to deal with the coronavirus crisis. The hospital is seen above on February 22, with the site as it looked before above in 2017 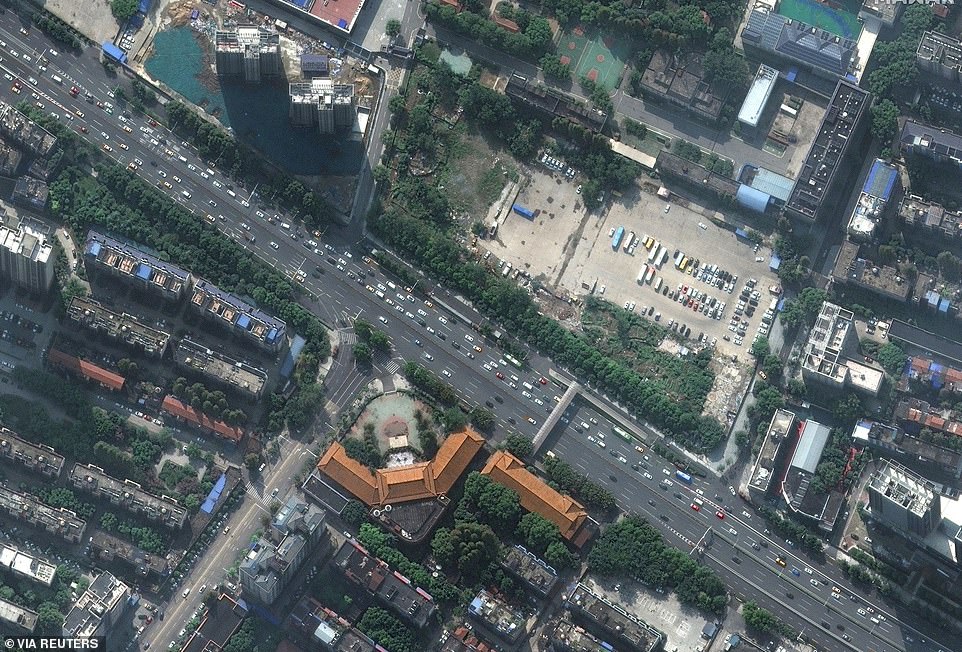 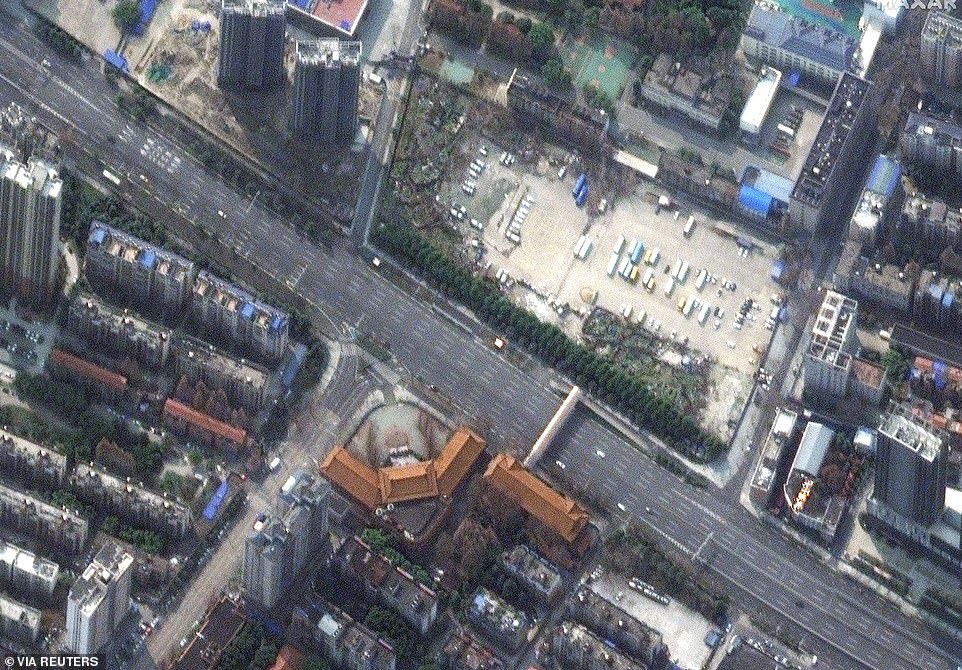 WUHAN, CHINA: A busy highway in the top picture on October 17 last year has become a nearly empty one by the time the bottom picture was taken on February 25, weeks after the virus is believed to have jumped from animals to humans 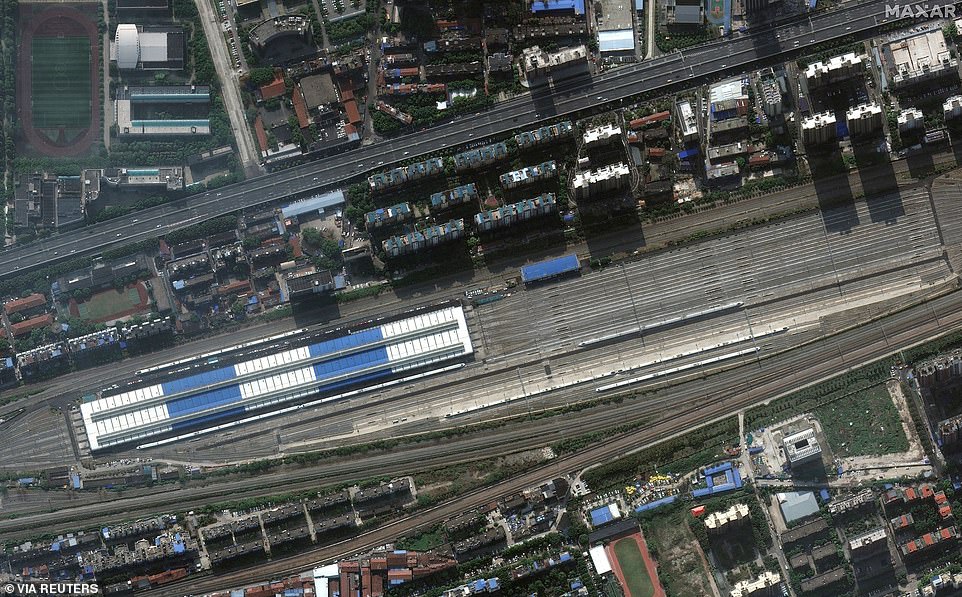 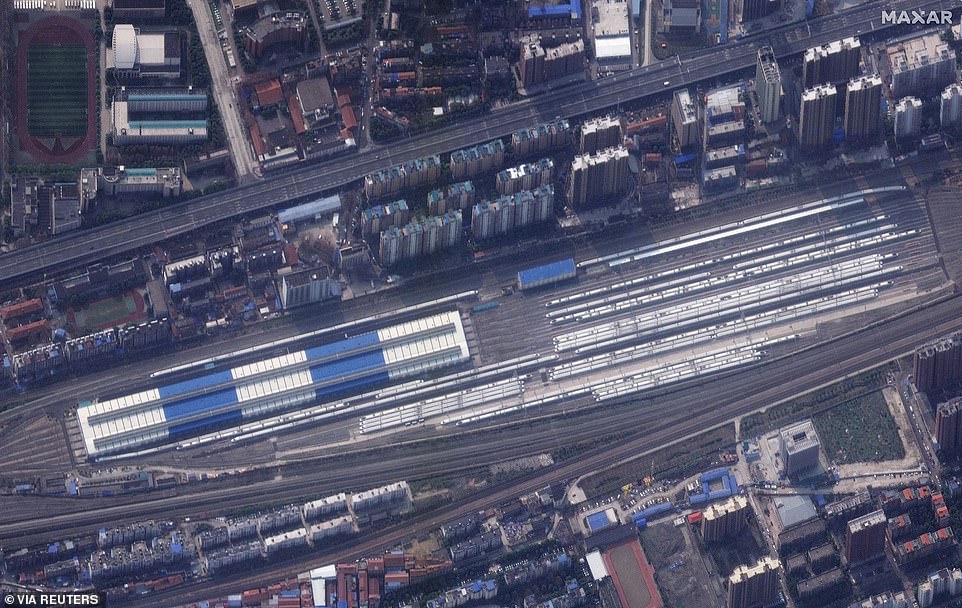 WUHAN, CHINA: A train station in Wuhan is shown above on October 17 last year, before the outbreak began, and below on February 25, with empty rolling stock idling at the station after the Chinese government imposed drastic travel restrictions 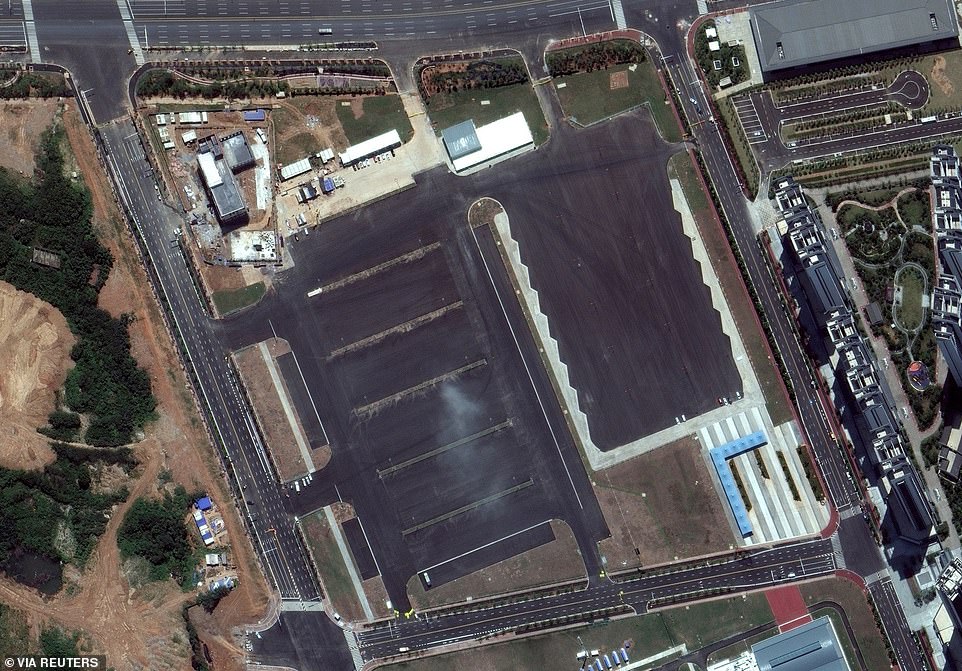 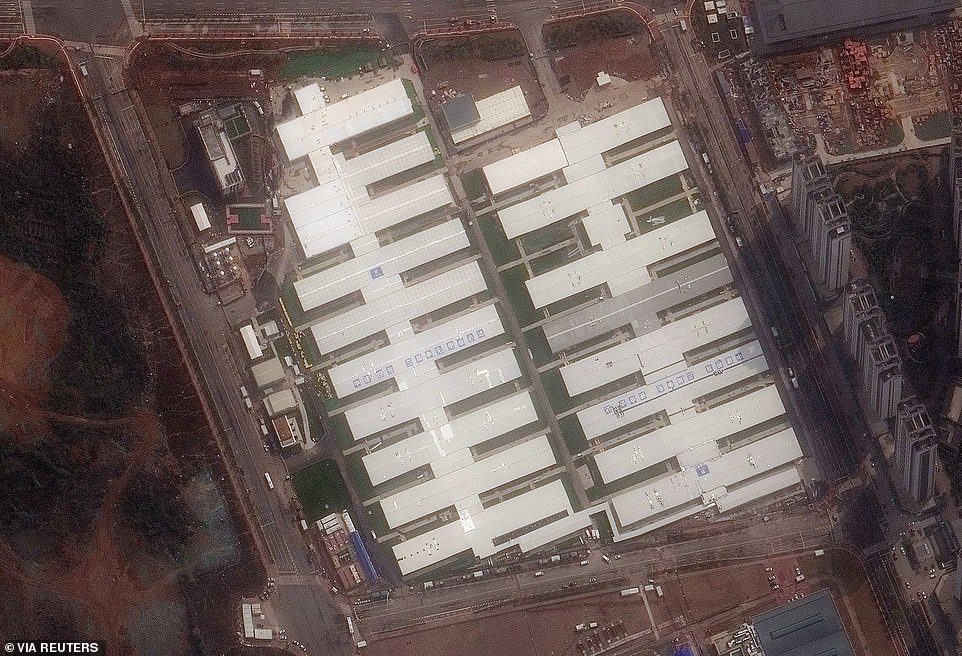 WUHAN, CHINA: Another hurriedly-built Chinese medical centre, the Leishenshan Hospital in Wuhan, is seen below on March 4 while the site where it was constructed is seen above on August 3 last year 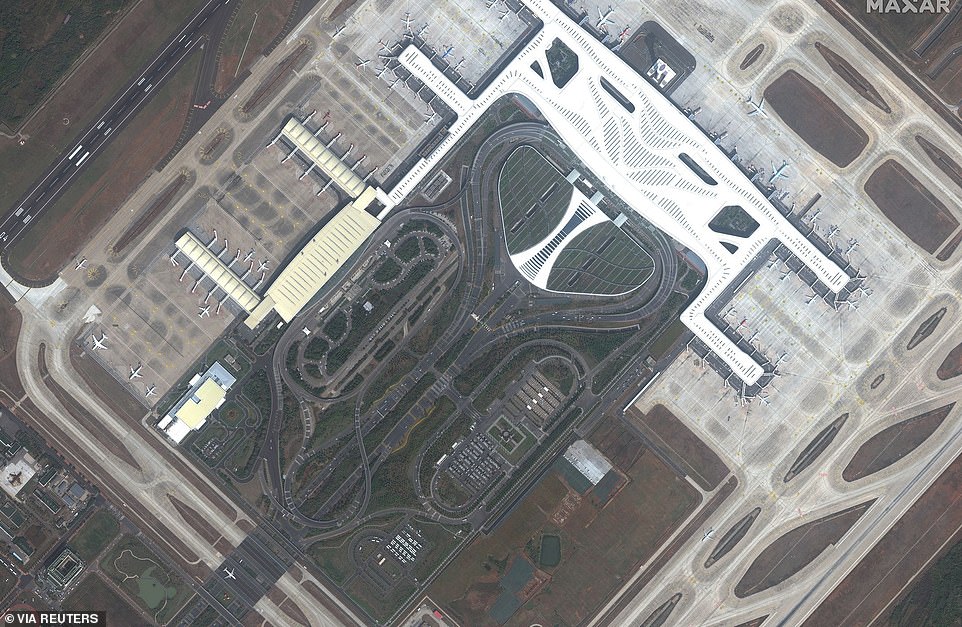 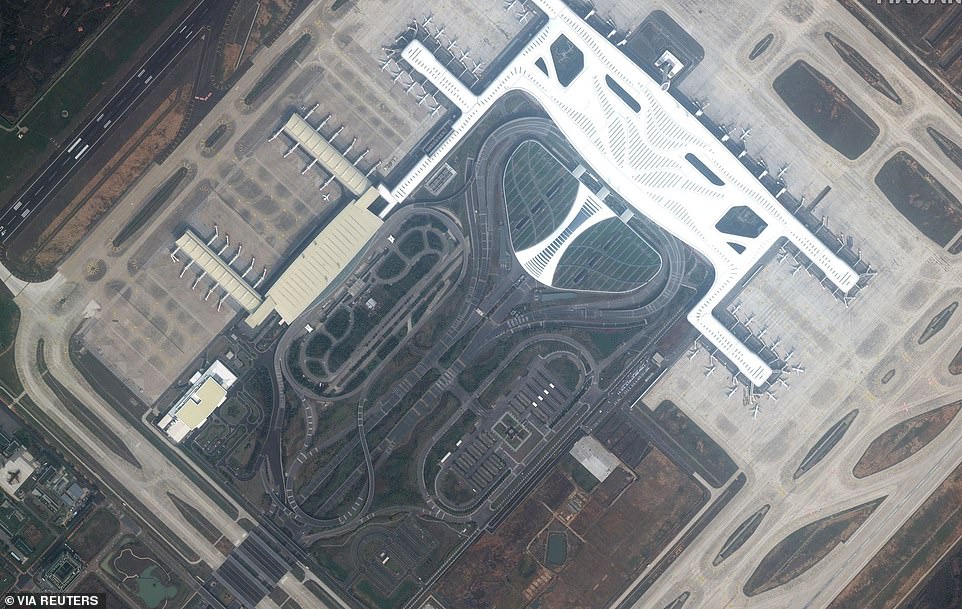 WUHAN AIRPORT, CHINA: The traffic on the airport complex in the above image on October 17 has almost completely vanished by February 25 when the below picture was taken 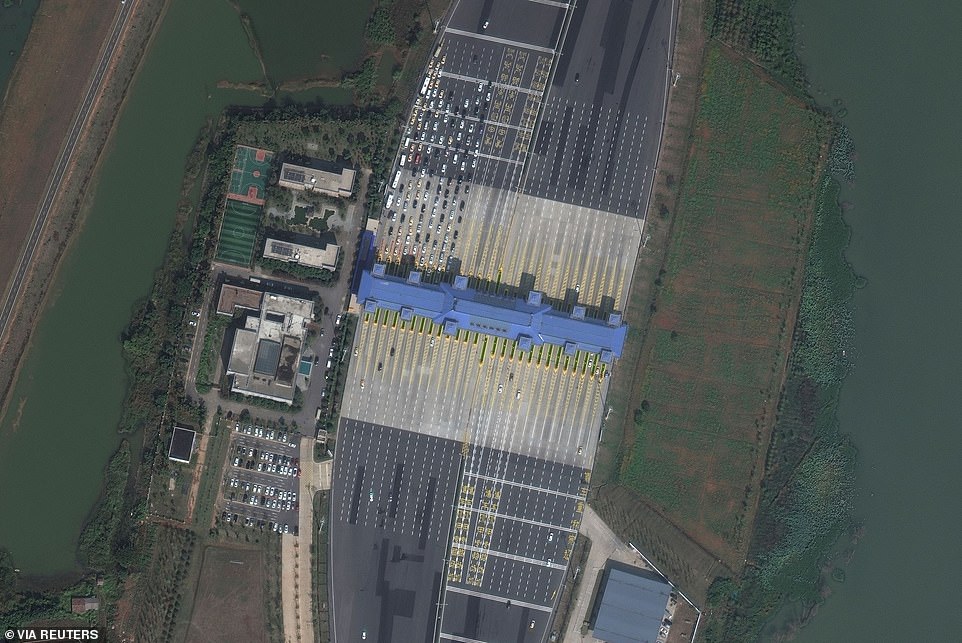 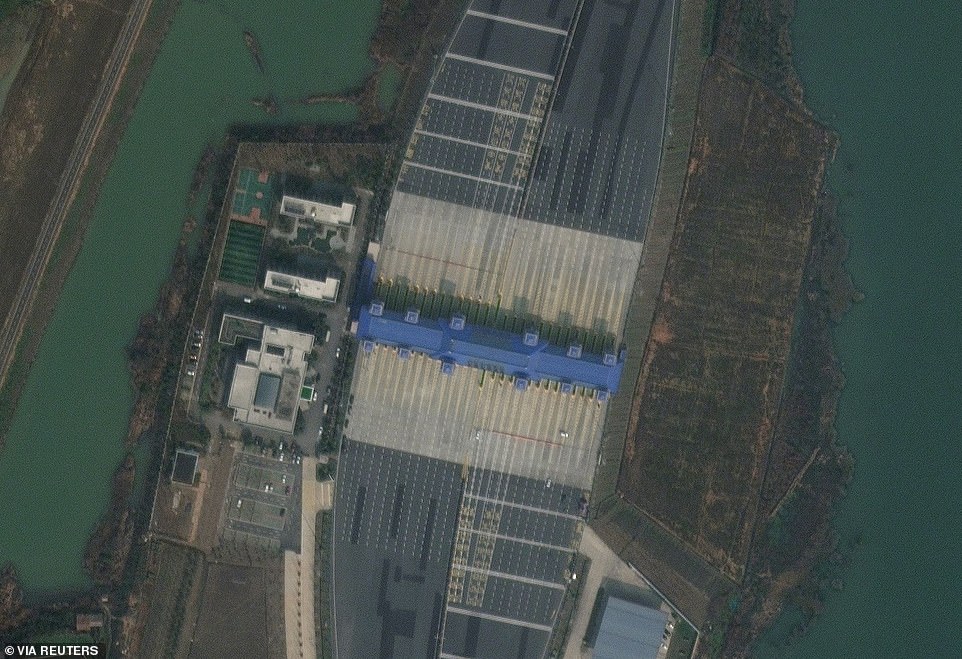 WUHAN, CHINA: A queue of vehicles at a toll barrier in Wuhan (seen above on October 17) has disappeared by February 25, when the below picture was taken, with Wuhan at the centre of the virus outbreak