Auckland: The Islamic State-inspired terrorist who stabbed six people at an Auckland supermarket searched online for “safety and security guidelines for lone wolf mujahedeen”, days after buying a hunting knife.

The searches were revealed in a court document relating to Ahamed Aathill Mohamed Samsudeen and released on Monday. 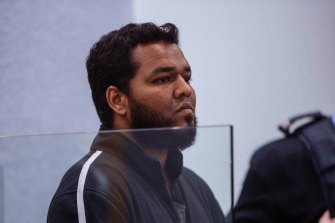 Auckland terrorist Ahamed Aathill Mohammad Samsudeen was shot dead at the scene of his attack.

The judgment, from Justice Geoffrey Venning, shows Samsudeen and a friend visited Target Shooter in East Tamaki in August 2018.

He asked to look at a 25-centimetre hunting knife displayed in a shop cabinet. Samsudeen checked the blade before placing the knife in its sheath and handing it back to the shopkeeper.

He said he would buy the $NZ39 knife but asked if it could be couriered to his home.

“He said he did not want to take the knife at that time because, as a dark man, people might think he was a bad person,” the judgment said.

Samsudeen had owned the same model of knife the year before but it had been seized by the police.

In the days following his purchase, Samsudeen made a series of internet searches including “Islamic state dress”; “Enemies of Allah”; “Isis allegiance”; and “Heroes of the Islamic state”.

He also searched for: “Safety and security guidelines for lone wolf mujahedeen”.

Samsudeen also looked at a number of video clips online, some of which provided “instruction on the use of the knife and footage of attempted decapitation using a hunting knife”. 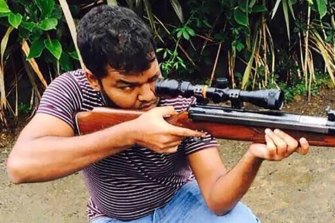 The judgment relates to a hearing in November 2020, when Justice Venning was asked by Samsudeen’s lawyers to dismiss three charges of possessing offensive weapons.

Justice Venning said the police were first alerted to Samsudeen in 2016 when he made a number of online posts on an internet article, including “Kiwi Terrorist low life scums killed innocent muslims kids and women”.

Samsudeen is also said to have posted: “One day I will go back to my country and I will find kiwi scums in my country (its very easy to find) and I will show them … what will happen when you mess with Aathil while I’m in their country. If you’re tough in your country … we are tougher in our country scums #payback”.

A short time later he added: “I will fill the enemies with stabbing and cut off their heads violently #EverytimeIBlinkMyEye”.

About the same time, in 2017, a former contact of his approached New Zealand authorities and told them Samsudeen planned to travel to Syria and fight with the Islamic State.

Police monitored Samsudeen and arrested him at the airport in May 2017 as he attempted to board a flight to Singapore.

The police believed he was on his way to Syria.

When they searched his room, they found a hunting knife hidden under his mattress. Samsudeen told officers why he had bought the knife.

“I looked up the law and it said it was okay to have it as long as it’s kept at home. Those guys come when I wasn’t home and moved my passport.

“I thought someone could come in and kill me.”

Samsudeen was charged with possession of an offensive weapon and posting objectionable material.

However, his lawyer, Belinda Sellars, QC, argued that because Samsudeen had been at the airport and was planning on leaving the country when the knife was found, he was not technically in possession of the knife.

Sellars, now a district court judge, said there was no evidence Samsudeen intended to use the knife for an unlawful purpose.

Justice Venning ruled that because Samsudeen had not got rid of the knife and still had the keys to his room, he was in possession of the knife.

The issue came down to whether it could be proven he had the knife to commit a crime.

But Justice Venning ruled there was no evidence on the face of it that he planned to use the knife against anyone.

“There must be a connection between the possession and the circumstances of time, place, or occasion, which is lacking in the present case.”

The charge was dismissed.

Two other charges related to Samsudeen’s arrest in 2018 when police found a throwing star, known as a ninja star, and the second knife bought at Target Shooter.

Again, the Crown argued that Samsudeen’s online searches showed he planned to use the weapons and “he was preparing to perpetrate and attack”.

Justice Venning agreed and said the injury and torture depicted in the online content were “far more extensive and extreme than could be inflicted by the throwing star”.

However, the judge did allow the Crown to pursue the charge in relation to the second knife.

He said Samsudeen had control of the knife in a public place, namely the shop.