Texas man attacks bailiff after being convicted of killing officer

A Texas man elbowed a bailiff who was attempting to handcuff him after the man was convicted of killing a San Antonio police detective.

Jurors deliberated about 25 minutes Monday before convicting Otis McKane, 40, of capital murder in the November 2016 fatal shooting of Detective Benjamin Marconi. Prosecutors were seeking the death penalty against McKane, with the trial’s punishment phase set to begin Tuesday afternoon.

A bailiff was trying handcuff McKane when McKane elbowed him in the face before several officers pushed him into an adjacent room. District Attorney Joe Gonzales and defense attorney Joel Perez declined comment on the outburst. Gonzales said the bailiff was not seriously injured. 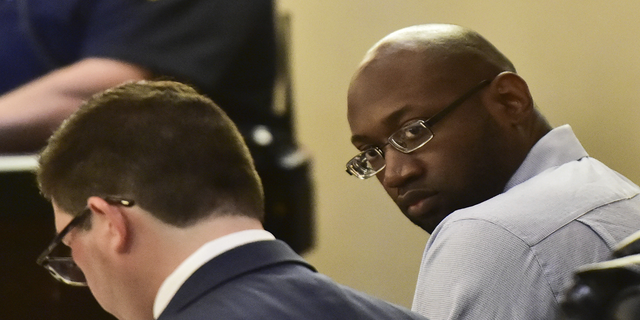 Marconi was fatally shot as he sat in his patrol car during a traffic stop that did not involve McKane, authorities said.

McKane, as he was being taken to jail following the shooting, told reporters that he “lashed out at someone who didn’t deserve it” because he was upset with the court system. McKane said he was angry because he had not been allowed to see his son during a custody battle.

Perez argued that Marconi had sent and received personal text messages moments before the traffic stop and was not officially on duty, therefore McKane could not be charged with capital murder and eligible for the death penalty.