The way Biden won should terrify the Trump campaign

Last Tuesday night, the US witnessed the most rapid political comeback in memory. Former vice president Joe Biden, whose sinking poll numbers and dismal showing in the first three presidential primaries portended the end of his presidential bid, won 10 of 13 Super Tuesday states, leapfrogging from the back of the pack to likely nominee overnight. 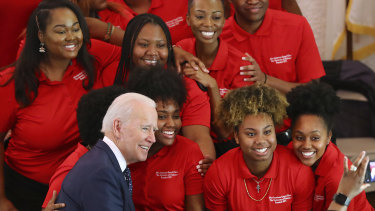 That victory remade the Democratic field. Billionaire Tom Steyer, having pinned his presidential hopes on South Carolina, dropped out that night. On Sunday, Mayor Pete Buttigieg quit; the next day, Senator Amy Klobuchar dropped out. Both moderate candidates, Klobuchar and Buttigieg endorsed Biden on Monday evening.

They did so because of the person who had dominated the early battlegrounds: Bernie Sanders. A democratic socialist and occasional Democrat, Sanders stormed through the early primary states, transforming from 2016's grouchy gadfly into 2020's formidable frontrunner. Sanders' rise, powered by a devoted base and aided by a splintered field, worried not just the Democratic establishment but Democratic voters who feared a left-wing candidate would lose to Donald Trump in November (though head-to-head polls show Sanders performing as well as Biden against Trump).

The consolidation worked. On a night with record-breaking turnout, Biden won expected states by huge margins, as well as unexpected states such as Minnesota and Oklahoma where Sanders had defeated Hillary Clinton four years earlier.

Not only did Biden rack up much-needed delegates, he disproved Sanders' case for his candidacy. Sanders had argued that he could not only replicate Obama's "coalition of the ascendant" – women, minorities, and millennials – but would add to it the working-class white voters who had drifted from the party in 2012 and abandoned it altogether in 2016.

But Sanders continues to struggle with black voters, and the young voters who flock to his rallies did not show up on election day. Instead, it was Biden whose coalition looked much more like Obama's. He not only swept the South, but he picked up Minnesota, part of the upper Midwest, as well as Massachusetts and Maine, making him a popular choice across several regions of the country.

What was also remarkable about Biden's victories was how much they resembled Donald Trump's in 2016. This might sound odd – after all, it's Sanders who is so often compared with Trump: the fervent base, the anti-establishment rhetoric, the angry rants against the biased media. But a closer look shows two wildly different campaigns: the Sanders campaign relies on significant local organising, with passionate political activists knocking on doors, rallying caucus-goers, and building expansive infrastructure using massive amounts of small-dollar donations.

The Trump campaign, especially in the primaries, had none of that. There were few Trump field offices and he routinely underspent his opponents, even when he had cash on hand.

That's how the Biden campaign has worked, too. He has consistently been one of the weakest fundraisers. In February, Biden raised $18 million to Sanders' $48.5 million. As a result, he had few campaign offices open even in important Super Tuesday states. He had one field office in the entire state of Virginia. He won with 53.3 per cent of the vote, 30 points ahead of Sanders.

The Biden campaign drove the record turnout on Super Tuesday, and did so with little money and organisation. That means something else is driving his support – and that something is fear of Trump's re-election. The anti-Trump vote is coalescing around the former vice president in record-breaking numbers.

That's a good sign for Democrats worried about 2020. In 2018, Democratic voters swamped the polls, sending a Democratic majority to the House and remaking state governments across the country. The Biden surge suggests we'll see the same in November – and, with a more moderate Democrat, that some disenchanted Republicans and white working-class voters will find their way to the Democratic ticket.

Biden isn't a lock for the nomination, but the path ahead looks promising. Billionaire Michael Bloomberg dropped out after Super Tuesday and threw his support to Biden. And while Elizabeth Warren, who also dropped out, has policy positions closer to Sanders, her support will likely split between the two men.

It's a remarkable turnaround for a campaign that, just one week ago, looked like a lost cause. But Joe Biden is back – and with him the Democratic Party's chances to win back the presidency.