Washington: At a press conference at the White House on Saturday (Sunday AEDT), US President Donald Trump paid tribute to the first American to die after contracting the coronavirus.

"Unfortunately one person passed away overnight," Trump announced. "She was a wonderful woman, a medically high-risk patient in her late 50s."

Vice-President Mike Pence, who is leading the Trump administration's response to the virus, also expressed his condolences, saying the woman's family members were in his prayers. 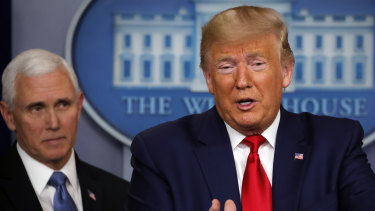 Donald Trump seems anxious that a potential pandemic could upend the election. Credit:AP

But the first US coronavirus victim wasn't a woman. It was a man from Washington state, as authorities there later confirmed.

If this had been a one-off, it would have been an unfortunate but forgivable mistake. Instead, it was just the latest in a string of false or misleading claims the Trump administration has made about the outbreak.

Even in such a deeply polarised country, Americans could hopefully rely on the federal government to provide accurate information about a global health emergency. Unfortunately, they can't.

All politicians spin, embellish and sometimes tell outright lies. In recent days, for example, Joe Biden has been exposed claiming he was arrested in South Africa during the apartheid era when there is no evidence this ever happened.

But Trump stands out for the way he fibs, fabricates and exaggerates with giddy abandon. According to The Washington Post, Trump has made 16,241 false or misleading claims since coming to office – a rate of 16 a day.

He has repeated some of those mistruths – like exaggerating the trade deficit with China or over-hyping his economic success – almost 300 times. And he's paid remarkably little price for it.

Even Democrats who disdain Trump have become largely inured to the fog of falsehoods, submitting to exhaustion rather than live in a state of perpetual outrage.

But now Trump's post-truth presidency has collided with the coronavirus pandemic – the biggest crisis he has faced since entering the White House. In this environment, the accuracy of the president's statements could potentially have life-and-death consequences.

Trump has urged Americans not to panic about the virus, and that's sound advice given the US has not yet been as badly affected as many countries in Europe and Asia.

But his haphazard attempts to minimise the virus's seriousness have heightened suspicions that he is more concerned about his protecting his political interests rather than the public's health and safety.

Trump is depending on a booming economy to help him win a second term, and the virus threatens that – as the massive stock market drops last week showed.

At a rally in February, Trump assured the crowd that it will "work out fine" and that with warmer weather the virus will die – a claim epidemiologists have described as "wishful thinking".

On Tuesday Trump said: "We have very few people with it. The people are getting better. They're all getting better. I think that the whole situation will start working out."

A day later, health authorities confirmed the first case of "community spread" of the virus, a worrying sign that transmission was no longer limited to those who had travelled to the worst-affected countries.

On Thursday Trump said he did not think it was "inevitable" that a major outbreak would occur in the US – contradicting the official advice of the Centres for Disease Control and Prevention.

"It probably will, it possibly will," Trump said blithely. "It could be at a very small level or it could be at a larger level. Whatever happens, we’re totally prepared."

He predicted that "in a couple of days" the number of people affected in the US would be "down to close to zero". Days later, new coronavirus cases are still being announced.

At a rally that night, Trump described the virus as the Democrats' "new hoax", comparing it to the Mueller investigation into Russian election interference and his Senate impeachment trial.

Trump's political opponents have painted him as a uniquely unfit and incompetent president, a portrayal that has been undercut by his administration's economic performance and relatively benign foreign policy outcomes.

Is it really so bad to have a president who fudges the truth if the country is prosperous and at peace, some Americans have asked. The coronavirus may make them think again.