NSW has recorded two new local COVID-19 cases overnight, both linked to existing cases, as the group of cases known as the “Bondi cluster” grows to 11. 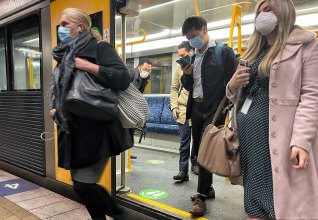 Both were already in isolation having been previously identified as close contacts.

Recent cases prompted two new venue alerts on Monday morning. Anyone who was at these locations must immediately call NSW Health on 1800 943 553, get a test and self-isolate.

“Anyone with even the mildest of cold-like symptoms is urged to get tested without delay and isolate until a negative result is received,” NSW Health said in a statement. “People in Sydney’s eastern suburbs and the Wollongong area are asked to be especially vigilant for the onset of symptoms.”

The Bondi cluster – which has led to exposure sites as far afield as Fairy Meadow and Campbelltown – has resulted in restrictions across Sydney and surrounds, as well as some other states placing conditions on entry by residents of the city’s east.

Masks are mandatory on public transport across Greater Sydney, the Blue Mountains and Wollongong and Shellharbour council areas.

Premier Gladys Berejiklian told 2GB’s Ben Fordham she and Health Minister Brad Hazzard were still awaiting the results of a police investigation into the first case in the cluster: a driver contracted to transport international air crew between Sydney Airport and their police-managed hotel quarantine accommodation who visited Bondi Junction Westfield on the weekend of June 12 and 13.

Police said last week they were investigating whether the man had adhered to daily testing requirements during his employment.

The Premier said she would be pushing for additional vaccine doses at national cabinet on Monday morning.

“That is our road to freedom,” she said before the meeting.

However, doses administered by GPs and Commonwealth respiratory clinics look set to decline for the second week in a row, with figures to Saturday 11.59pm showing an 18,000 drop compared to doses administered during the same period last week.