London: Dominic Cummings has warned that the British government needs to allow public scrutiny of its vaccine strategy as he said “secrecy contributed greatly to the catastrophe” of the early months of the pandemic.

The former No 10 adviser, who is set to give evidence to a parliamentary inquiry next week, launched another public attack on the Government on Tuesday (AEST). 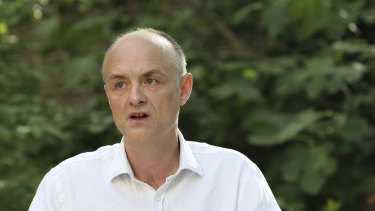 In a series of tweets, he said COVID plans were “part disaster, part non-existent”, criticised lockdowns that lacked “serious enforcement” and warned the success of the vaccine taskforce could be undermined.

He also said he could sell or disclose what he claimed to be the “the only copy of a crucial historic document from COVID decision-making” – donating any proceeds to the families of COVID victims – before later deleting the post and confirming that he would give the documents to the inquiry before which he is due to appear.

Responding to Cummings’s threat yesterday, the Prime Minister’s spokesman suggested there would be repercussions if the document was made public. He told reporters: “Obviously, there are clear rules that are abided by in these situations.”

It came weeks after Downing Street briefed that Mr Cummings was suspected of leaking a series of damaging stories to newspapers about the Prime Minister. In response, the former aide published a blog containing further damaging allegations.

While it remained unclear what the security classification of Cummings’s document was, senior government sources who were not cleared to speak on the record warned that under the Official Secrets Act, serving or former officials who disclosed secret information faced prosecution, while less serious violations could still be considered a breach of contract.

In a wide-ranging broadside against the government, Cummings said: “One of the most fundamental and unarguable lessons of Feb-March is that secrecy contributed greatly to the catastrophe. Openness to scrutiny would have exposed government errors weeks earlier.”

The 49-year-old disputed claims that secrecy over vaccine supplies was necessary, adding that 99 per cent of the plans were “totally irrelevant” to national security.

As UK government departments consider local lockdowns to deal with the Indian variant that is surging in parts of the country, he branded the UK’s border policy a “joke” and claimed that “pseudo lockdowns” without “serious enforcement are hopeless”.

He went on to challenge ministers to subject their plans for coping with mutant strains to public scrutiny, suggesting it would reveal any potential “screw-ups” sooner.

The Prime Minister’s spokesman dismissed Mr Cummings’s criticism of the Government’s border policy, stating: “I would reject that. We have some of the strongest border measures in the world.”