UK’s coronavirus death toll could have topped 100,000 if government didn’t tell the public to stay at home, study suggests

More than 100,000 people could have died from coronavirus in Britain if ministers didn’t tell people to stay at home, research suggests.

Dozens of countries have been forced to tell people to stay home and close shops in a bid to stop the Covid-19 pandemic.

Scientists in California have now estimated how stay-at-home policies curbed death tolls across the US.

They claimed deaths would have been twice as high had officials not introduced the drastic policies to control spiralling coronavirus outbreaks.

Under the same maths, it would suggest that Britain – which adopted blanket stay-at-home guidance during the darkest days of the crisis – would have had up to 105,300 victims.

Department of Health figures show the current laboratory-confirmed Covid-19 death toll stands at 46,413. Other statistical estimates say the number of victims is around the 65,000 mark. 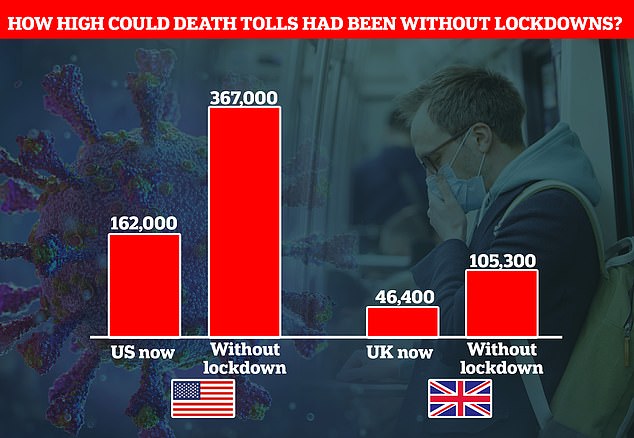 Researchers in the US said Covid-19 deaths would have been twice as high in March and April had officials not introduced ‘stay at home’ mandates. Applied to the UK and US now, it means without lockdowns, the US could have seen 367,000 deaths and the UK 105,300 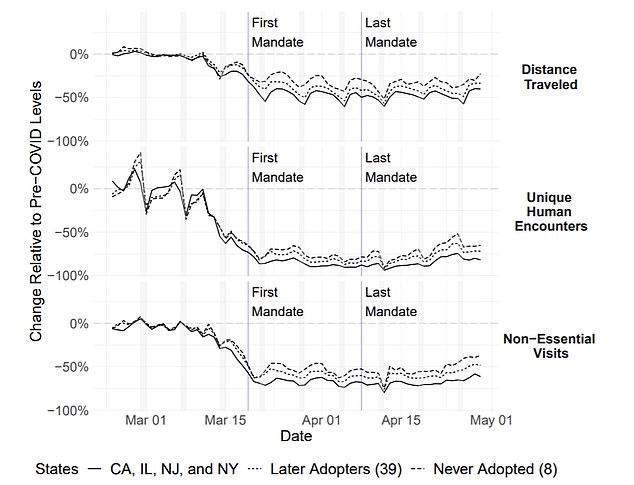 Researchers compared data on changes in travel and mobility during March and April (pictured) and compared it to hospital data. The data came from Unacast, which receives location data from millions of mobile devices, which showed how distances travelled, non-essential visits, and human encounters dropped. The ‘first and last mandate’ is when the first and last states gave stay at home orders

To look at the effects of the stay-at-home mandates in US states, the researchers collected data on mobility and how it had dropped since Covid-19 arrived.

The data came from Unacast, which receives location data from millions of mobile devices through apps, Wi-Fi and Bluetooth connections.

The experts estimated changes in travel activity and social distancing ‘per square kilometer by day and by state’, relative to what it was pre-Covid-19.

They also looked at how these things changed when the ‘stay at home order’ was implemented by each state – some earlier than others.

After lockdowns, the team estimated travel reduced by seven percentage points, visits to non-essential businesses by 2.1, and human interactions by 3.5.

WHAT DO OTHER STUDIES SAY ABOUT LOCKDOWN SUCCESS?

Another study from University of East Anglia suggested draconian stay-at-home orders and shutting all non-essential businesses had little effect on fighting coronavirus in Europe.

But the same scientists discovered closing schools and banning all mass gatherings did work in slowing outbreaks across the continent.

Other leading scientists have claimed Britain’s COVID-19 outbreak peaked and started to decline before the official lockdown began, arguing that Number 10’s drastic policy to shut the UK down was wrong.

However, some studies directly contradict the theory that lockdown was pointless.

A scientific paper from Imperial University in London published in June found lockdown likely saved almost half a million lives in the UK alone.

The UK, Germany, Spain, France and Italy each dodged up to 500,000 coronavirus deaths or more because of their draconian policies, the team estimated.

A separate study also published in June suggested around 500million Covid-19 cases were prevented by lockdowns in six countries, including the US.

Researchers measured how numbers of Covid-19 cases changed over the course of the pandemic and whether they dropped in the days following strict rules.

Physical distancing measures such as closure of schools, workplaces and public transport, a ban on mass gatherings, and full-scale lockdowns led to a larger reduction in cases when they were implemented early than late – 14 per cent compared with 10 per cent.

It took an average of nine days for countries to recommend social distancing once the first case was detected there. But some countries took far longer.

Britain was one of the slowest to introduce the life-saving lockdown measures along with Thailand, Australia and Canada.

It took 45 days from the first reported case, on January 31, for Prime Minister Boris Johnson to advise social distancing on March 16. The full lockdown didn’t come for another week, starting on March 23.

Cases shrunk by 17 per cent as a result, which was higher than the average but low compared to fast-reacting Andorra where cases dropped by 36 per cent.

All these estimations were compared with rates of hospitalisations and deaths due to Covid-19 per state per day.

This came from the COVID Tracking Project (CVT), considered the most up-to-date and reliable log of hospital activity in America during the pandemic.

The study period only covered the period of March and April – the first couple of months Covid-19 spread in the US and UK.

Across 43 states that adopted the ‘stay at home message’, this represented 23,300 to 30,100 fewer deaths and roughly one million averted hospitalisations.

For the average state with a population of 6.8million, the models predicts some 543 to 701 deaths were averted during the two-month period.

Add in the effects of social distancing and less travel before lockdowns were imposed, an estimated 48,000 to 71,000 deaths were averted in total, the researchers said.

But applying the findings to the whole of the US, which had 62,547 deaths by the end of April, it suggests even more lives could have been saved.

A handful of more rural states — Arkansas, Iowa, Nebraska, North Dakota and South Dakota — governors held off on imposing stay-at-home orders. California was the first state to adopt the policy in mid-March.

Meanwhile in the UK, all citizens were told by Prime Minister Boris Johnson to ‘stay at home’ on March 23. This was changed in May to ‘stay alert’ as lockdown measurements were slowly lifted.

Applying the researchers’ findings to the UK, it means the death toll could have been twice as high as what it was at the end of April.

While the Department of Health count some 46,000 deaths across the four nations based on positive Covid-19 tests, statistical bodies count around 65,000 based on death certificates.

However, the mobility data and hospitalisations and deaths due to Covid-19 would have been different to the US, so it is not clear how well the model fits the UK.

The authors of the paper, led by James Sears, a PhD candidate at University of California, wrote: ‘Our estimates suggest that residents subject to stay-at-home mandates on average responded as desired to curb the spread of COVID-19.

The paper was published on the website MedRxiv, meaning it has not been reviewed by other scientists yet. 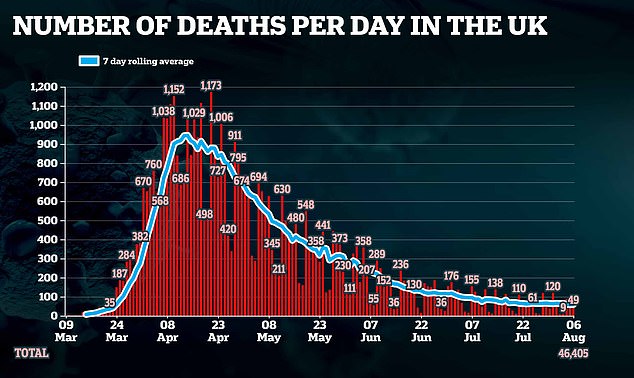 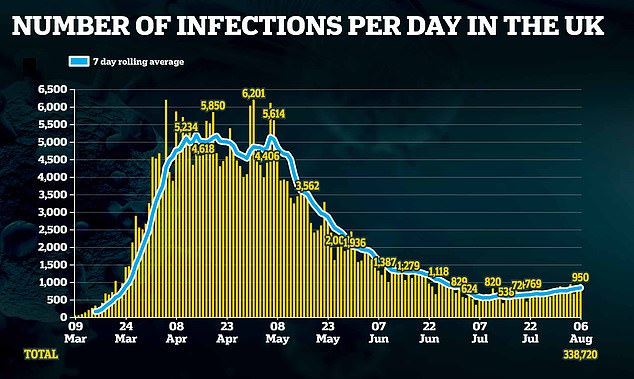 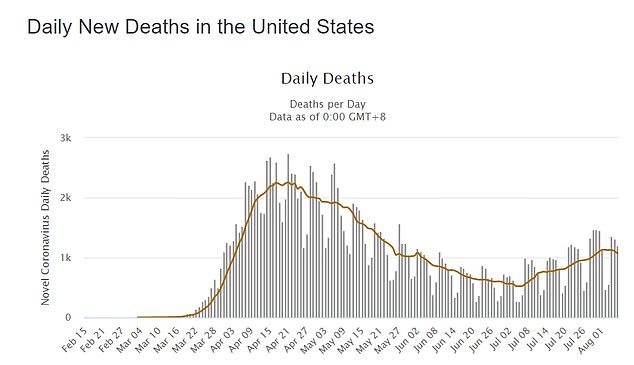 Some scientists do not believe that lockdown had any affect on the number of Covid-19 fatalities.

A recent study claimed whether a country was locked down or not was ‘not associated’ with death rate.

But other scientists have been adamant the lockdown was necessary, and was so important it should have been enforced in Britain weeks before it was on March 23.

Professor Neil Ferguson – the academic whose work led to Britain’s lockdown – says the lockdown likely saved almost half a million lives in the UK alone.

His team at Imperial University in London found coronavirus lockdowns across Europe probably prevented up to three million Covid-related deaths.

‘Professor Lockdown’ has also conceded that, in hindsight, tens of thousands of lives could have been saved if the lockdown had come a week earlier.

A separate study also published in June suggested around 500million Covid-19 cases were prevented by lockdowns in six countries, including the US.

A TIMELINE OF THE UK’S COVID-19 LOCKDOWN

February 28: Virus started spreading uncontrollably in Britain, according to the World Health Organization.

March 12: Anyone who developed a fever or a new cough, regardless of whether they got tested for COVID-19, was told to self-isolate for two weeks.

March 13: The London Marathon, set to take place on April 26, was rescheduled for October 4.

England’s top tier of football – the Premier League – is suspended.

March 16: A report by the Imperial College COVID-19 Response Team, headed by Professor Neil Ferguson, published a report warning that 250,000 people could die if no lockdown was introduced.

March 17: The Royal Albert Hall in London is closed until further notice.

March 18: Glastonbury Festival 2020 – scheduled for the summer – was cancelled.

The British Museum and the Design Museum are closed until further notice.

March 24: All non-essential businesses, including clothing shops and hairdressers, were ordered to close.