‘We don’t know anything’: Salvadorans fret over looming bitcoin adoption

San Salvador: In the main handicraft market of El Salvador’s capital, traders complain that with a week to go before bitcoin becomes legal tender, no officials have come to explain how it will work or what benefits it may bring.

The sense of unease extends beyond San Salvador’s “Excuartel” market well into the Central American country of 6.4 million people that on Tuesday will become the first nation in the world to adopt bitcoin as legal tender. 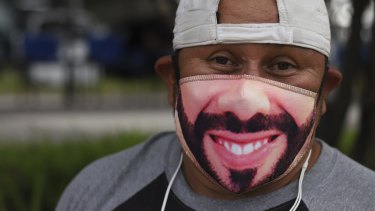 “They haven’t given us training. They haven’t told us what we’re going to use or how to make the change.”

At “Excuartel,” a popular tourist draw, President Nayib Bukele’s government has installed one of the 200 ATMs of its Chivo digital wallet that will allow the cryptocurrency to be converted into dollars and withdrawn without commission.

But some 18 traders and passers-by interviewed by Reuters said no authority has explained how bitcoin works, so most say they will not use it, at least to begin with. 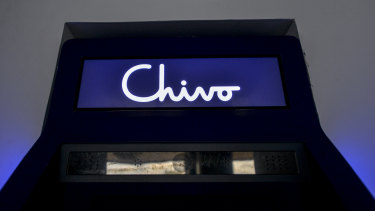 A Chivo Bitcoin automated teller machine at the Multiplaza Mall in San Salvador.Credit:Bloomberg

In July, three out of four Salvadorans had reservations about the bitcoin plan, an opinion poll showed.

On Wednesday, about 300 protesters marched on El Salvador’s Congress to demand repeal of the new bitcoin law.

“Bukele, understand – in El Salvador we don’t want bitcoin,” said a placard carried by one protester.

Another protester, 29-year-old student Roxy Hernández, said most Salvadorans do not want to use bitcoin and are confused by the law, which states vendors must accept bitcoin payments, even though Bukele has said it is not mandatory for vendors or consumers.

A Chivo Bitcoin automated teller machine at the Multiplaza Mall in San Salvador.Credit:Bloomberg

“The bitcoin law is something arbitrary by the government,” said Roxy, wearing a t-shirt with a logo that rejects bitcoin.

Bukele has defended his initiative by insisting that use of the digital currency will be optional in the impoverished, dollarised country, and that it will eliminate commissions Salvadorans pay abroad to send home remittances.

More than 2.5 million Salvadorans live abroad – the vast majority in the United States – and in 2020 they sent back almost $US6 billion ($8.14 billion), equivalent to 23 per cent of the country’s gross domestic product.

“The clumsy opposition always plays single-move chess. They have bet everything on scaring the population about the bitcoin law and maybe they’ll achieve something, but only until September 7,” Bukele wrote on his Twitter account last week. 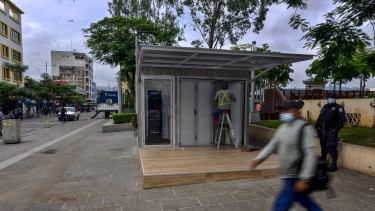 “Once it’s in effect, people will see the benefits; they’ll be shown up as liars,” he added. “And what happens if someone doesn’t want to use bitcoin? Well, nothing. Don’t download the application and continue with life as normal.”

Bukele’s plan includes a bonus of $US30 equivalent in bitcoin for those who use the government’s electronic wallet “Chivo,” a local word for something “good” or “nice.”

Critics of Bukele’s plan argue that using bitcoin is risky given the cryptocurrency’s volatility and because it could be used to launder money. They have pointed to Salvadoran officials the US State Department has accused of corruption.

“(The) bitcoin law promises many surprises, unintended consequences and costs that have not been considered,” said Steve Hanke, an economist at Johns Hopkins University.

Hanke said it was “inconceivable” that the new standard could escape guidelines set out by the Financial Action Task Force (FATF), an inter-governmental institution that fights money laundering.

“The last thing El Salvador needs is a flagging by the FATF,” he said.

Since El Salvador adopted the dollar as legal tender in 2001, average annual inflation has been just 2 per cent, one of the lowest in Latin America. That record, critics argue, could be jeopardised by the introduction of a cryptocurrency whose value has fluctuated by $US2500 in a matter of hours.

“I prefer the dollar, because we already know it and know it well, there’s no problem. But as we don’t know (bitcoin), we don’t know how it will work,” said Jose Guardado, a 48-year-old farmer in the Aguilares municipality north of San Salvador.

The World Bank and the International Monetary Fund have cited environmental and transparency concerns over the adoption of bitcoin, and markets are sceptical.

“The markets are telling us that Bukele’s authoritarian tendencies and crackpot cryptocurrency ideas will result in currency chaos and economic collapse,” said Hanke at Johns Hopkins.

“For the United States, this would mean yet another wave of migrants from an unstable Central American failed state.”

Get a note direct from our foreign correspondents on what’s making headlines around the world. Sign up for the weekly What in the World newsletter here.