‘We expected a surge. We got a tsunami’: Biden supporters ecstatic at Super Tuesday wins

Washington: Joe Biden has staged a remarkable political comeback, scoring a string of victories in the crucial Super Tuesday primaries and setting up a protracted fight with Bernie Sanders to secure the Democratic Party's presidential nomination.

The former vice-president was expected to pick up the most delegates on offer and emerge with an overall lead, a prospect that seemed almost unthinkable just days ago.

Biden grabbed the most delegates in at least eight of the 14 states that went to the polls on Tuesday (Wednesday AEDT) and was narrowly ahead of Sanders in the electorally-powerful state of Texas. 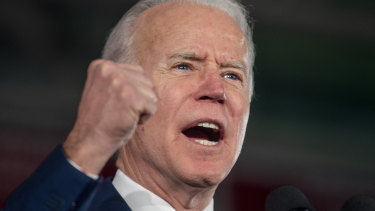 Former vice president Joe Biden’s campaign was faltering just days ago but now he is surging in crucial states. Credit:AP

"It’s a good night and it seems to be getting even better," a jubilant Biden told supporters in Los Angeles as the results came in.

"They don’t call it Super Tuesday for nothing … It may be over for the other guy."

But Sanders was on track to pick up a huge chunk of delegates from California, the richest prize on offer, as well as winning Colorado, Utah and his home state of Vermont. 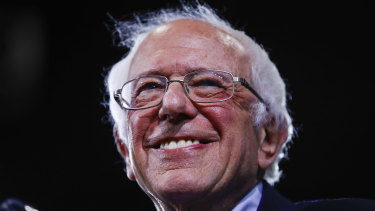 Sanders told supporters in Vermont he had "absolute confidence" he would win the party's nomination.

The results suggest former New York City mayor Michael Bloomberg, who spent hundreds of millions of dollars on political advertising in the Super Tuesday states, got a poor return on the unprecedented investment.

Bloomberg failed to win a majority of delegates in any state, though he did carry the tiny territory of American Samoa. 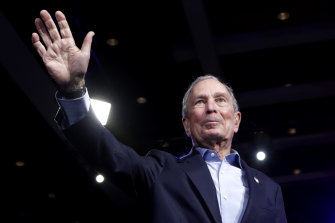 Michael Bloomberg waves to the crowd during a rally at West Palm Beach, Florida.Credit:AP

He returned to New York after the results started coming in, and was reportedly considering whether to speedily drop out of the race.

The billionaire businessman appears to have no viable path to the party's nomination, and neither does Elizabeth Warren who finished third in her home state of Massachusetts.

A third of total delegates to the Democratic Party's convention in July were up for grabs on Tuesday, and it will take several days for all the votes to be counted.

By Wednesday evening, AEDT, Biden had own Texas from Sanders by a small margin.

In California, Sanders was ahead on 29 per cent compared to Biden on 20 per cent, with 38 per cent of precincts reporting.

Biden started the night strongly by winning North Carolina and Virginia, which had the third and fourth highest numbers of delegates on offer.

As well southern states such as Oklahoma and Tennessee, he picked up surprise victories in Massachusetts and Minnesota where the electorate is more progressive.

Biden had not even campaigned in those states during the campaign, reflecting the assumption he had no hope of winning there. 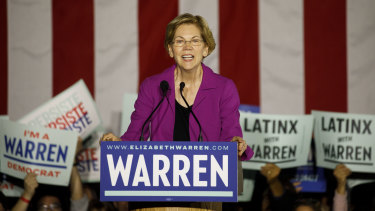 "Amazing night no one would have predicted even days ago," David Axelrod, Barack Obama's former chief strategist, wrote on Twitter. "We expected a surge. We got a tsunami."

The former vice-president finished in a poor fourth and fifth placed finish in the early voting states of Iowa and New Hampshire, denting his image as the Democrat best-placed to defeat Donald Trump in November.

But his blow-out win in South Carolina cemented him as the leading moderate in the race, and prompted centre-left rivals Pete Buttigieg and Amy Klobuchar to drop out of the contest.

Buttigieg and Klobuchar both speedily endorsed Biden, sending a strong signal to moderate voters to fall in behind the 77-year old.

Biden won overwhelming support from African American and older voters, as well as college-educated white voters in the suburbs.

Sanders continues to perform better among younger progressives, as well as Hispanics.