London: A few weeks ago, during the Sunday service in Eyam, a village in the English Peak District, a group of Chinese students shuffled into the pews at St Lawrence's Church.

The students had arrived unexpectedly in a rented car from nearby Sheffield, having read about the heroic decision taken by Eyam villagers in the 17th century to quarantine themselves during an outbreak of bubonic plague. 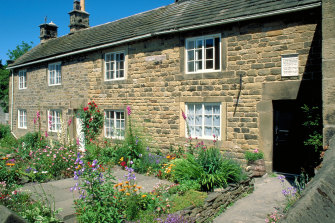 It’s pretty enough today but 350 years ago Eyam was the village of the damned.

With coronavirus engulfing the students' homeland – and now spreading across the globe – they wanted to join the village in prayers.

Between 1665 and 1666, Eyam was the village of the damned. During 14 terrible months of self-imposed isolation, 260 villagers died out of a population of about 700. But the plague remained contained and the surrounding villages were spared.

Eyam is rightly proud of this extraordinary chapter in its history, and the church (where the register of the victims is kept) well used to tourists. But even so, the Chinese students made an unusual sight. The Rector of the Grade II-listed church, the Reverend Mike Gilbert, invited the group up to the altar and prayed with them for their own communities back home, now taking the same decision to seal themselves off from the outside world.

The Chinese students took photographs and recorded a video of their visit, later posted online. A week later, Mr Gilbert received a strange voicemail from a number with a foreign dialling code from close to Wuhan Province – where the coronavirus outbreak originated – and took it to the Chinese takeaway in the neighbouring town of Bakewell to translate. 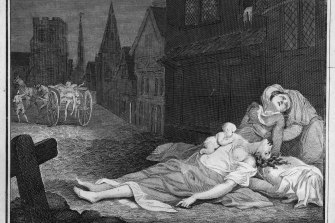 In 1665 London was in the grip of the plague. Eyam was infected thanks to a bundle of cloth ordered from the big city.

"They said they have got the virus, it is spreading and they are scared," says Mr Gilbert. "And they thanked us for our prayers."

The collective fear of a deadly new virus in our midst is something which spans continents and centuries. And as coronanvirus continues its exponential spread, the choice made by Eyam villagers 350 years ago in the face of a far more deadly illness is something many more of us may face in the coming weeks.

Perhaps, even, the residents of the Derbyshire village themselves: on February 27, a case was reported in the town of Buxton, just 20 kilometres away.

In the stone cottage in Eyam where the plague first showed up in September 1665 – via infected fleas in a bundle of damp cloth ordered from London, where the Great Plague was raging – only a woman called Mary Hadfield survived, but lost 13 relatives, including her new husband and two sons. 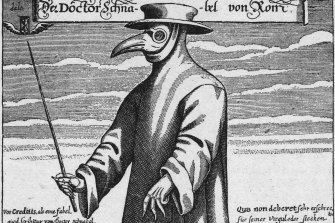 The following August – when deaths in the village reached a peak of half a dozen a day – another resident, Elizabeth Hancock, lost six of her children and her husband in the space of just eight days.

She was forced to drag their bodies to bury them in a nearby field. Their graves are marked with headstones and can still be found today, though most of the Eyam plague victims lie in unmarked plots scattered around the countryside.

Eyam resident and retired church warden Joan Plant, 73, is among those still living in the village who can trace their family tree back to the plague. Her ancestor, Margaret Blackwell, contracted the disease and, while delirious, drank a jug containing scalding fat – but miraculously survived.

Joan has taken part in a research project conducted in the US which mapped the DNA of 100 Eyam residents and discovered 14 of them – including Joan – carry a genetic mutation known as CCR5-delta 32, which boosts resistance to HIV and is believed to have been passed down by plague survivors.

"That depth of love they showed for one another by self-isolating comes down through the generations," Joan says. "A lot of families like ours are still in the community."

While virus outbreaks bring out the best in humanity, they also engender our worst impulses. Certainly, one reason why the Eyam quarantine was so scrupulously observed (only one wealthy family and the children of the village rector escaped) was the suspicion with which they were viewed by surrounding villages.

One Eyam resident fled early one morning and, when she was recognised in the neighbouring village of Tideswell, was driven back to the quarantine zone by residents throwing stones.

People survived through provisions left by outsiders at the village boundaries. An act of kindness, of course, but also one to ensure they didn't leave.

In Brighton a few weeks ago, where Covid-19 first emerged in Britain, mask-wearing Chinese students faced racist attacks and people throwing eggs at them because of a growing sense of public hysteria.

The schoolchildren in Brighton had developed a new playground game – "Coronavirus Tag" – which bears echoes of the old nursery rhyme "Ring a Ring o' Roses" that children used to sing to describe the symptoms of the plague.

Today, the rhyme is engraved into the gates of Eyam Primary School.

It may seem a strange badge of honour but, Joan Plant says, Eyam will always be proud of its plague history, especially with its reputation now resonating across the globe for communities who have cut themselves off in the face of a new virus.

"It helps to know that this horrible time our ancestors endured is making a difference today," she says. "That is so powerful for us as a village."