Where was Eric Weddle before he rejoined the Rams? Winning his first football championship ever

Anytime their team had a game the following day, Eric Weddle’s coaches learned to expect their phones to buzz deep into the night.

Weddle often stayed up long past midnight studying film of the upcoming opponent and mulling tweaks to the game plan. He’d then text anything from inspirational quotes, to weaknesses he had identified, to ideas for which blitz would best counter a jet sweep.

That is all perfectly normal behavior for a 37-year-old NFL veteran, except that the Los Angeles Rams safety wasn’t texting Sean McVay and his staff. These 2 a.m. text messages would go to the other dads who volunteered to help Weddle coach a San Diego-area Pop Warner team.

Assistant coach Al Gamez once jokingly asked Weddle why he was working so late. “Trying to be great, buddy!” Weddle answered matter-of-factly, before launching into an explanation about a coverage scheme he wanted to implement.

“Wow, this is what this guy is about,” Gamez marveled afterward. “He was always trying to get all of us to be the best we can be.”

Before the Rams coaxed him out of retirement last month to bolster their injury-laden secondary and their pursuit of a Super Bowl run, Weddle was obsessively chasing another championship. He brought an NFL mentality to his son’s 12-and-under team, introducing an elaborate playbook and meticulously structured practices yet always ending conversations with his players with a compliment or hug.

When Weddle sensed that the Rancho Bernardo Broncos had the necessary blend of talent and determination to contend for a championship, he tried to motivate them to seize the opportunity by revealing a surprising truth about himself. He gathered his players together and told them, “I played 20 something years straight of tackle football, organized football at every level and never won a championship.”

While Weddle can earn his first Super Bowl ring on Sunday if the Rams defeat the Cincinnati Bengals, it would now be his second championship. In November, the Broncos won him his first, dumping a cooler of ice water over Weddle’s head after an emphatic victory in the 2021 Pop Warner West Coast Conference title game.

“It’s very special when you think about it,” Weddle said, “because it doesn’t happen often.”

Eric Weddle 'just another dad' … with an intricate playbook 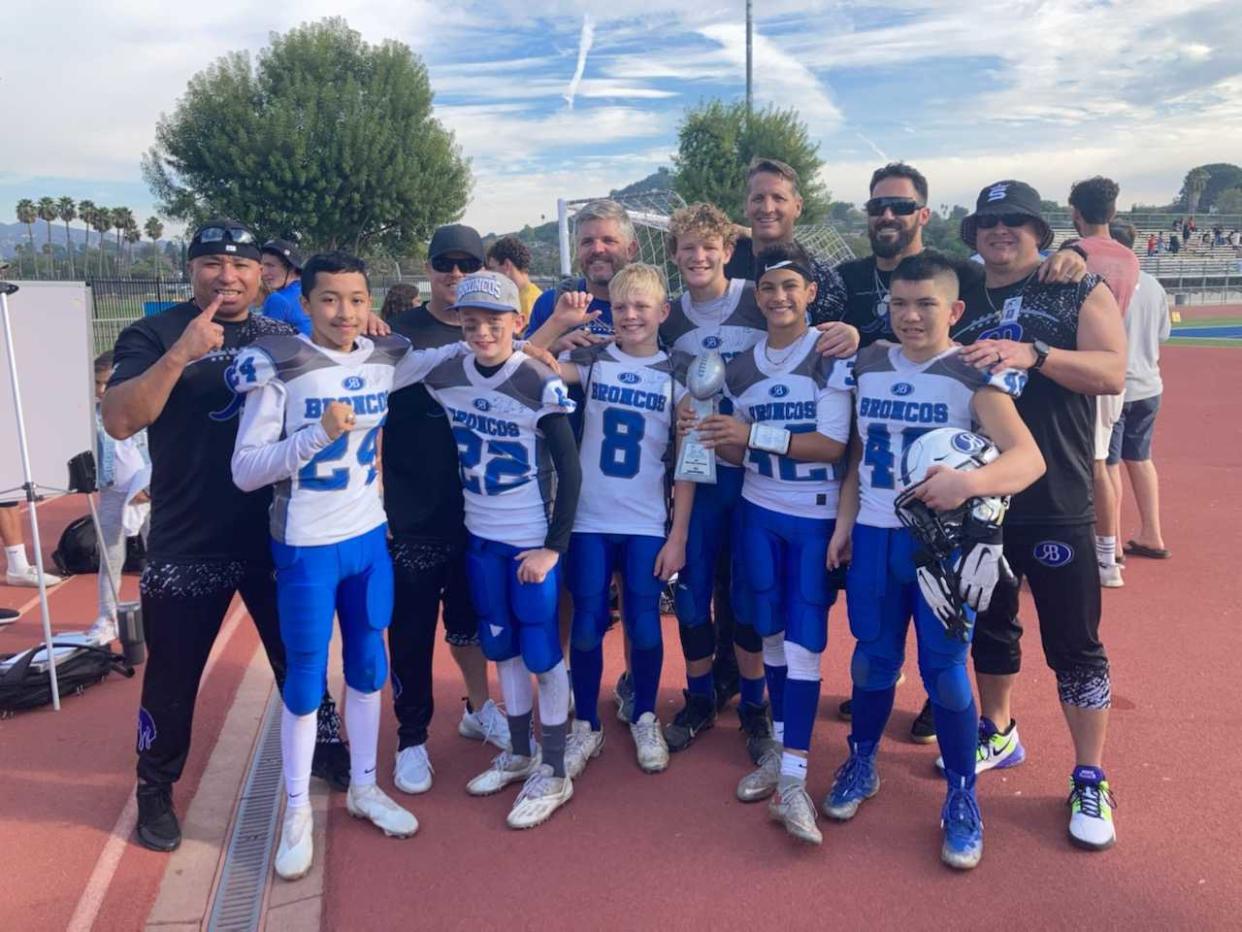 Weddle didn’t intend to jump into coaching when he retired from football two years ago after a decorated career with the Chargers, Ravens and Rams. The six-time Pro Bowl safety was content to be a stay-at-home dad who packed school lunches, chauffeured his kids to school and practices and golfed or played pickup basketball in his spare time.

Friends say the itch to coach struck Weddle while watching his son Gaige play football. At first, Weddle preferred to play the role of dad. Eventually, it became too hard for Weddle to stay quiet when he felt Gaige’s team blitzed at an inopportune time or played Cover-3 when they should have switched to Cover-2.

Last May, Rancho Bernardo Pop Warner introduced Weddle as its new 12U head coach. The most football-savvy of his future players were instantly starstruck. Others turned to Wikipedia to learn about him.

Only a few weeks later, Weddle invited his assistant coaches to his house so they could all get to know each other better. Two had ample experience: Scott Coats had retired from coaching high school football after the 2019 season and Gamez had coached youth football for 29 years. The rest were dads who had played when they were kids.

If the other coaches had any concerns that Weddle would be aloof or unapproachable, those quickly melted away.

Coats described chatting with Weddle as “just like talking to another dad” who wanted the best experience for their sons.

Chris Jurges remembered Weddle bouncing ideas off everyone in the room as though their football expertise was remotely similar.

“Here’s a guy who spent 13 years in the league,” Jurges said, “and he’s asking his Pop Warner staff what to do.”

The only concern that arose from that initial meeting was whether Weddle’s expectations were beyond what 11- and 12-year-olds could handle. Weddle intended to run a spread offense and a blitzing 3-4 defense, both of which mirrored the Baltimore Ravens’ systems. The playbook was thicker and more intricate than the ones that Coats’ high school teams used, let alone typical Pop-Warner teams.

“Some of us looked at each other like ‘Does this guy understand he’s working with 11- and 12-year-olds?’” Coats said.

Gamez was the first to speak up. He asked Weddle how he intended to teach more than 200 plays to 35 preteens, half of whom had never played football before.

“Something tells me you don’t have faith we can do this?” Weddle said.

Weddle finally wins a championship, and his son is the star

While Weddle taught the playbook gradually and communicated clearly which parts of each play call were relevant to which position groups, Gamez remained skeptical that players who claimed they understood actually did.

After a few practices, Gamez decided to conduct an experiment. He pretended to call a play and asked his son Angel if he knew what route he should run. To Gamez’ amazement, Angel correctly replied, “Yeah, dad, a dig route.”

“We picked up every single one of those plays really fast,” Angel said. “Coach Weddle broke it down in a way we could understand and made it really easy.” 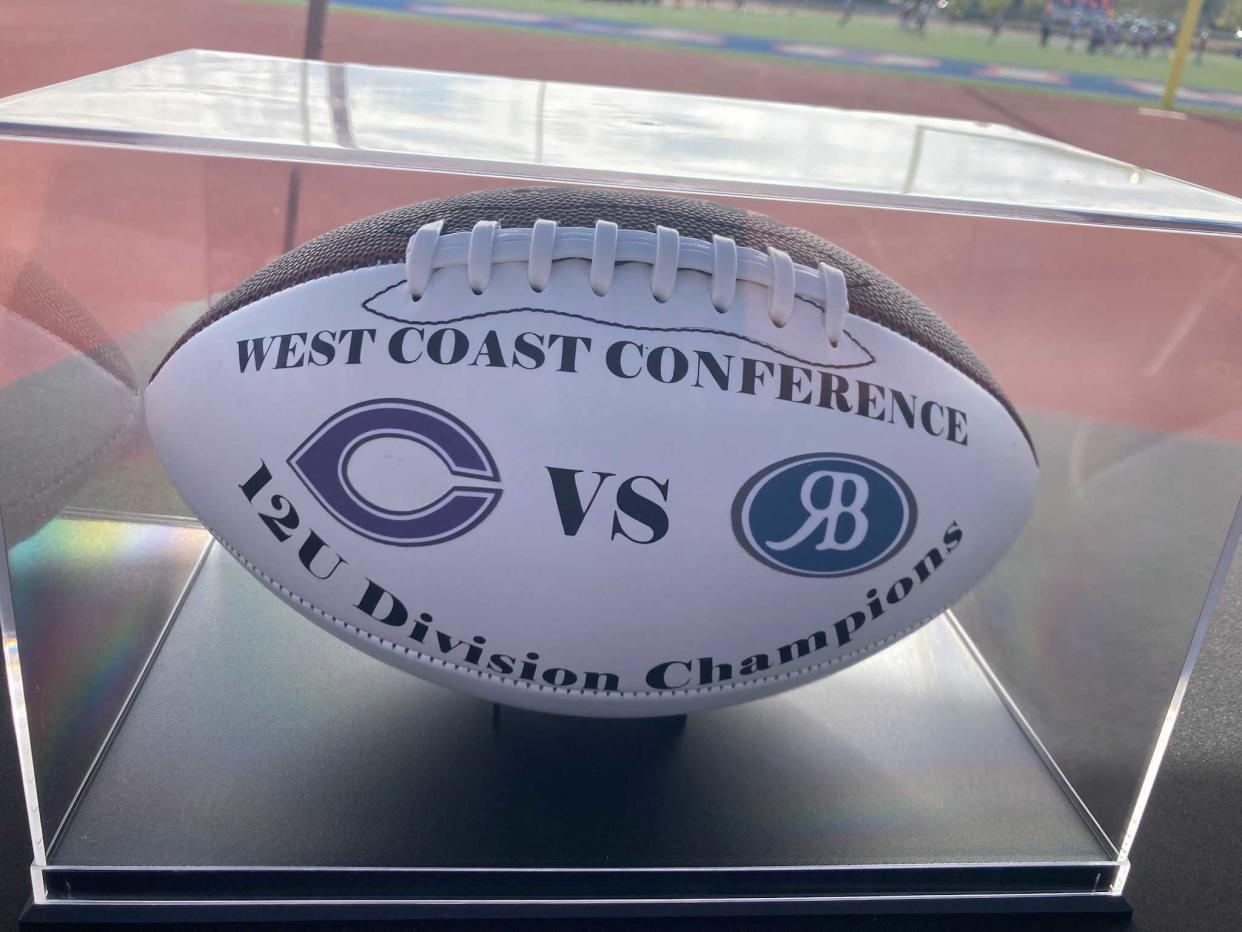 A 13-year NFL veteran calling plays was certainly an advantage for the Broncos, but they also benefited from having a player who Weddle could trust to execute his game plan. Gaige Weddle starred on both sides of the ball, at quarterback and at safety.

As a quarterback, Gaige was lethal with his arm and with his feet. As a safety, Gaige was a spitting image of his dad, a sure tackler who loved to deliver a hit.

“I’ve coached football for 25 years,” Coats said, “and he’s as pure a tackler as any kid I’ve ever coached.”

Throughout the season, Weddle pushed his players hard. When a linebacker would take a bad angle to make a tackle, Weddle would let him know. When a receiver would shy away from a hit, Weddle would bark, “Don’t be afraid to stick your face in the fan.”

For Weddle, good was never good enough. Day after day, he’d challenge his players and his staff to “go be great.”

Though every opponent the Broncos faced arrived eager to take down Eric Weddle’s team, not many even came close. The Rancho Bernardo Broncos capped an 11-1 season in November by overwhelming the Carlsbad Lancers, 44-15, in the title game.

Weddle, at last, could celebrate a championship. But at that time, he had no way of knowing that only a few months later he’d have the chance to raise another trophy.

Weddle takes his own advice and joins the Los Angeles Rams

Long before Weddle rejoined the Rams last month, the Broncos suspected their coach was still physically capable of returning to the NFL if he ever had the desire.

They saw that he went to the gym everyday without fail, that he diligently took care of his body, that he could still make the superhuman look ordinary when he quarterbacked the Broncos’ scout team.

“He ran a read option in practice once and took off,” Coats recalled. “I went, ‘That’s what NFL speed looks like.’ It was ridiculous.” 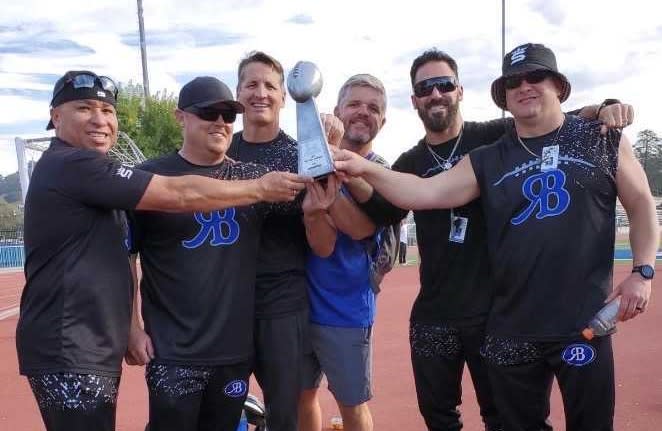 Weddle still followed the Rams and Ravens closely in retirement, but he didn’t keep up with the day-to-day churn of the NFL news cycle anymore. He wasn’t aware that the Rams were running out of healthy bodies at safety. He didn’t see that Jordan Fuller had suffered a season-ending right ankle injury in Week 18 or that Taylor Rapp had entered concussion protocol.

When Rams defensive coordinator Raheem Morris dialed him just over a month ago, Weddle initially had no idea why he’d be calling. Not once had Weddle felt the urge to unretire. He’d actually watch jarring collisions during a football game and wonder how he ever withstood those as a player.

“I was happy and content with my new life,” Weddle said.

And yet still he considered the possibilities when Morris made his plea for Weddle to return.

On one hand, he was in shape but not in football shape. At 37, two years removed from his last NFL game, he didn’t know if his body could withstand the pounding anymore. What if he embarrassed himself and damaged the legacy he built?

On the other hand, he had no doubt his mind was up to the challenge. Rapidly absorbing the intricacies of a new defensive system might as well be Weddle’s super power. And there was a good chance this opportunity to chase a Super Bowl might never come again.

In the end, Weddle decided to take the advice he always gave the Broncos. He’d go try to be great. Only five days before the Rams’ playoff opener against the Arizona Cardinals, he returned to the team wearing No. 20 — as in Weddle 2.0.

“Five days prior, I was at home doing drop offs and pickups,” Weddle recalled. “Now I’m playing on a Monday night.”

Weddle played in 19 snaps in the Rams’ opening-round rout of the Cardinals. That soared to 61 in a divisional-round victory over the Tampa Buccaneers. And in the NFC championship game against the San Francisco 49ers, Weddle didn’t miss a defensive snap and led the Rams in tackles.

Seeing Weddle thrive has brought great joy to the 35 Rancho Bernardo Broncos families who had the chance to get to know him this past season. They text him to “go be great” during the week. Then they cheer themselves hoarse on game days.

“I lost my voice last week screaming at the television,” Jurges said. “My wife doesn’t even watch football, and I’ve never heard her scream louder in my life.”

When Weddle returns to his retired life of coaching Gaige, making school lunches and chauffeuring his kids, the Broncos are hoping he won’t be empty-handed.